King Louis XIV: One King, One Law, One Faith

King Louis’ reign and goals can be summarized with his desire for “one king, one law, one faith.” As an absolutist leader, he centered the country around himself, and was successful in his goal. By glorifying his position as king, he achieved “one king”, by limiting the power of others, he achieved “one law” and by uniting the French religion, he achieved “one faith”. Louis XIV was successful in accomplishing this central, powerful French monarchy. To achieve “one king” in France, Louis formed himself into an absolute and glorified leader, doing wonders for France’s centralization.

Don't use plagiarized sources. Get your custom essay on
“ King Louis XIV: One King, One Law, One Faith ”
Get custom paper
NEW! smart matching with writer

In 1682, Louis relocated to his new palace at Versailles, magnificent enough to be the home of a god. The sheer size and beauty awed Europe and proclaimed his authority. Rituals, too, at Versailles boasted Louis’ power. Common activities such as dressing and walking required elaborate, showy rituals whose precipitants competed for the honor of their task. These, too, made Louis the center of attention and achieved the loyalty of his subjects.

Finally, Louis governed in a matter that did not demand any input from others; he governed in the matter he desired, and superseded the power of the nobility and aristocracy. His efforts were not in vain, people felt honored if Louis were to but merely glance at him, or if they were to but walk with him. Louis exercised much control over his people because of the matter in which he made all affairs revolve around him. Louis XIV desired “one law”, achieved by his limitation of the powers of nobles and other statesmen and the unification of the military.

Louis was but a young boy during La Fronde, a series of uprisings against royal policies and heavy taxation.

Nevertheless, it had a significant impact on Louis XIV’s reign; he made sure to never allow another rebellion or let nobles to be as powerful as they had been. He ruled through multiple council of state, but demanded an active role in their decisions. “That I had no intention of sharing power”, said Louis. Another significant policy of Louis was his housing of the French nobles at Versailles. He demanded that all the nobles stay at Versailles for part of the year so he could survey their activities. Nobles, having no choice, would come and obey their monarch. To further his law policies’ success, Louis regulated the French military by establishing one uniform and training method. This did not allow for the noblemen to threaten his supreme power or question his loyalty. Although Louis claimed he had supreme authority in France, he relied heavily on the cooperation of nobles to extend his power. Even so, Louis was successful in uniting his “one law”, not influenced by others. Finally, Louis desired “one faith”. Although Louis was not intolerant to Protestants, he hated division, and oppressed non-Catholics. Most significantly was Louis revocation of the Edict of Nantes, which allowed Huguenots the right to worship in 150 French towns, making a very strong example of Louis’ stance toward Protestants. In addition, Huguenots lost their churches, schools and clergy. Indeed, Louis did not approve of Protestantism. He instead praised Catholicism, as he was a Catholic himself. He required all his subjects to be loyal to the Church and its laws. This united France with a common faith that would continue to shape the religion on France. Though the revocation of the Edict of Nantes had drastic effects on the economy of France, Louis had achieved a unified French faith which he insisted would be vital to the nation In conclusion, Louis XIV embraced a “One king, one law, one faith” policy toward his governing. He was successful in this goal, attributed to his own glorification, the restriction of others’ power and the unity in religion.

King Louis XIV: One King, One Law, One Faith. (2016, Mar 01). Retrieved from https://studymoose.com/king-louis-xiv-one-king-one-law-one-faith-essay 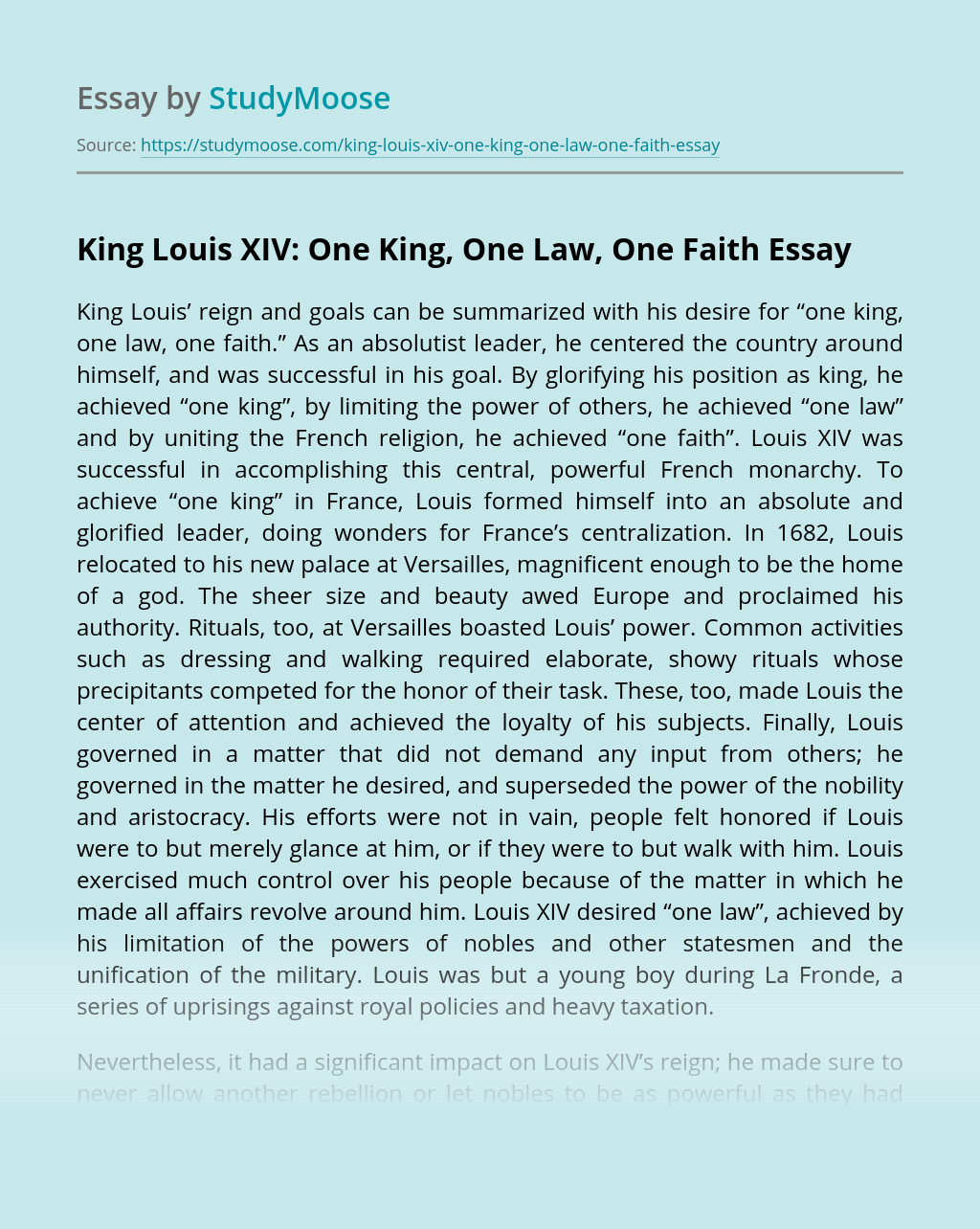