Bayanihan is a Filipino term referring to the spirit of communal unity and cooperation. It was derived from the word bayan which means nation or community. It became a known trait of the Filipinos and was practiced by Filipinos until now. Bayanihan can be viewed in many forms but, the first thing that comes to the mind of a Filipino when heard this word is the old tradition of people helping a relocating family by setting enough volunteers to carry the house, and literally moving it to its new location.

Don't use plagiarized sources.
Get Your Custom Essay on The Philippine Bayanihan Just from $13,9/Page

This practice is done by putting bamboo poles length-wise and cross-wise under the house forming a strong frame to lift the stilts from the ground and carrying the whole house with the men (often 20 or more) positioned at the ends of each pole. They do it in a festive mood. When the relocation is done, the moving family hosts a simple fiesta as an expression of gratitude towards their neighbors.

The essence of bayanihan is very much felt in the country. In sports, bayanihan is showcased. The players of the team give their best shots and strive hard in order for them to win. When I was in elementary, I became one of the volleyball players and I and my teammates performed this so-called bayanihan, not by carrying a kubo but, by cooperation. We became united in setting our goal and with the spirit of bayanihan, our team fortunately won the game. Bayanihan is helping. It is bayanihan when a group of people helped someone. Nowadays, bayanihan is not only practiced through personal but it can also be practiced even with great distance. In times of calamities, we cannot avoid the instances that many people suffer and die from these disasters but still Filipinos practice bayanihan. Officials and even non-officials give donations for the relief goods and medical assistance of the victims. The power of bayanihan is shown when someone is in a critical state and needs financial and moral help.

One example of this kind of bayanihan is when Baby Liam was hospitalized due to chronic lung disease. Baby Liam underwent intensive medications and treatment for three months and money became the major problem of his mother, that’s why she did everything she can. She asked help through Facebook. According to Yarza (2011), through Facebook, many kind-hearted Filipinos gave help and there were online stores that volunteered to raise money for Baby Liam through the sale of their items. Every time Baby Liam needs blood transfusion, many people came out and donated blood for him — bus drivers, house helpers, security guards, and even the employees of the hospital he was confined in. When he grows up, he will be able to say with pride that he is a product of what is truly Filipino bayanihan of the modern times (Yarza, 2011).

Bayanihan is the collaboration of people in uplifting the culture of the country. A good example of this kind of group is the Bayanihan Dance Company. They have adapted the name of their group from this trait. As the name implies, the BDC is a group of Filipino dancers and musicians conceived in the spirit of bayanihan working together with no individual stars, promoting Philippine culture. The group has performed internationally. In fact, the troupe performed last November 1, 2012 at the Jazz in Lincoln Center in New York City. They performed even though a storm hit New York. The group made the Filipinos and even Americans who were there feel the essence of bayanihan. Bayanihan is truly a part of the Filipino culture. It runs through the veins of every Filipinos. Wherever a Filipino is, the essence of bayanihan is still practiced and will be practiced by the coming generation. 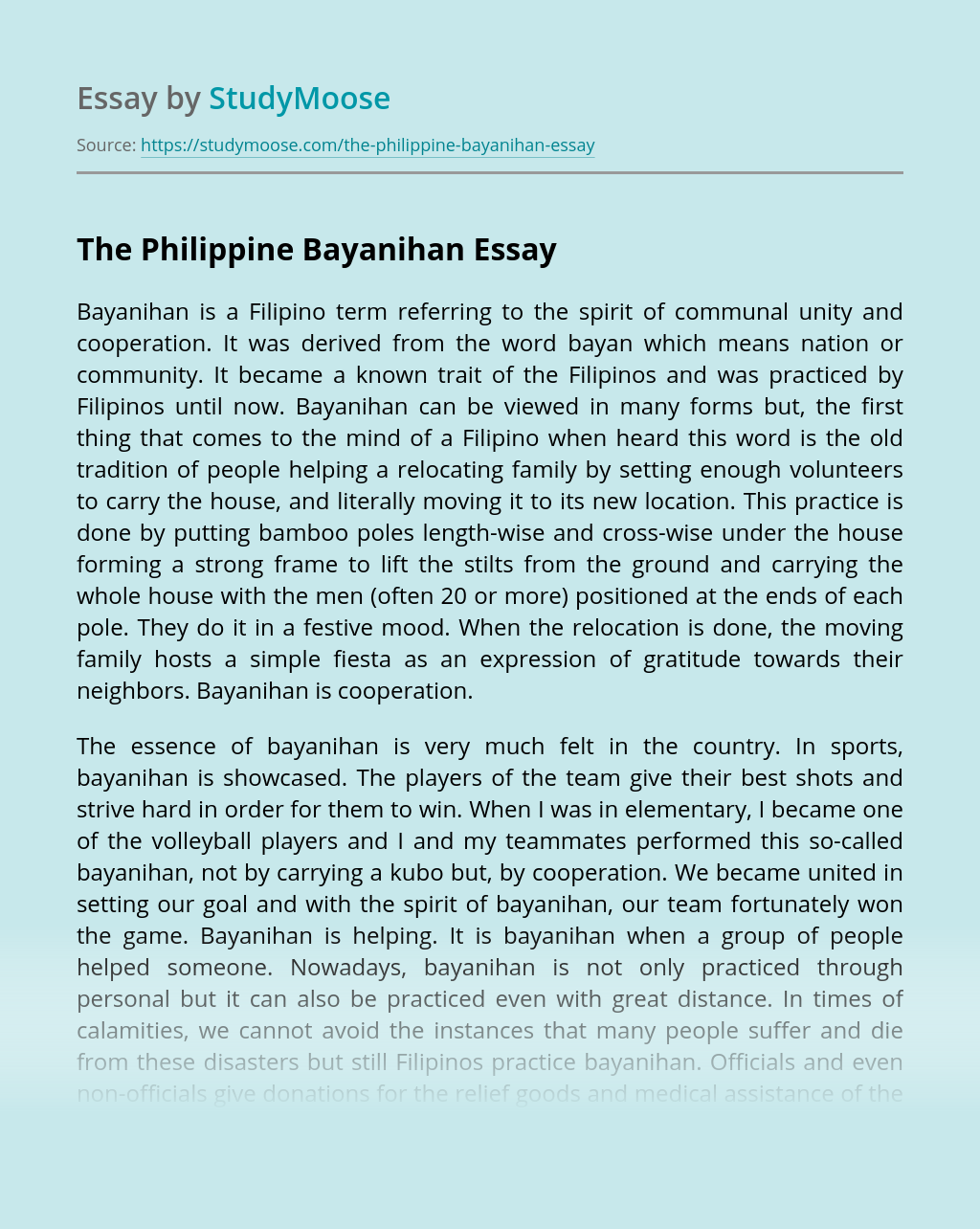 3.8 / 5 ( 38 votes ) This article written by, Horace Miner, was my first read in where I was shocked to discover such barbaric rituals from other areas of life. I took the time to re-read this article several times. I have learned of many different cultures in where people do things that...

3.8 / 5 ( 38 votes ) Introduction As long as I can remember my family has always had food on the table and a family gathering on the fourth November in our home. We have all heard elementary stories of wood cabins and the Pilgrims and Indians celebrating thanksgiving. Though, I never knew the...

Get Essay
The imaginative landscape

3.8 / 5 ( 38 votes ) It is human nature to long to belong, to fit neatly and comfortably into a familiar niche. It allows for a foundation, on which to build upon. It often nurtures us, but sometimes, as our ever static identities develop, we surpass it. We out grow it. It is...

3.8 / 5 ( 38 votes ) In Alice Walker’s tale of family and tradition, “Everyday Use” the author challenges the popular Black nationalists’ movement of the day. It was the heyday of the ideology of Black Power and the return to the African roots of the pre-slavery days. The eldest daughter, Dee, seeks to...

Belonging and Return in Films Sampson and Delilah

3.8 / 5 ( 38 votes ) In order to fulfill his office diligently, a pastor is to strive to know the faithful entrusted to his care. Therefore he is to visit families,.. strengthening them in the Lord..” (Code of Canon Law’,529,1). Poland is a profoundly religious country where approximately 90% of the population is...

3.8 / 5 ( 38 votes ) Another customer segment is represented by the numerous family members and guests attending weddings, anniversaries, and similar events. This segment requires event preparation services like gift ideas, etiquette tips, etc. Wedding Consultants plan to operate in the Eugene, Oregon area. This area has at least 15,000 weddings in...