With the advent of globalization, strong economic linkages had been formed among states and groups of developed and developing states. Here the term “development” was readily associated with economic development, which, in conventional terms, refers to the utilization and exploitation of natural resources (Pinto 2007). Utilization and exploitation here is morally neutral. Both developed and developing nations during the early half of the 20th century adamantly exploited the environment for economic development, that is, for the building of profit-driven manufacturing sector. In recent decades, however, the term acquired a new meaning.

Don't use plagiarized sources. Get your custom essay on
“ Extent of International Cooperation in “Global Commons” Area ”
Get custom paper
NEW! smart matching with writer

With the escalation of environmental problems in developing countries, world institutions like the World Bank and the WWF encouraged developed countries to formulate steps to reduce the effects of these environmental problems. Most of the developed countries responded positively to the suggestion (with the exception of the United States). They agreed to pool some of their resources for environmental researches. These researches had two standing goals (Taylor 2004). The first objective was to facilitate economic development in developing countries by apportioning some of their capital outlay to these countries.

The second and most important goal was to protect and conserve the environment from the effects of development; that is, the so-called unregulated development. Thus, the term “sustainable development” made its appearance in the World Conservation Strategy published in 1980 by the International Union for the Conservation of Nature (Pinto 2007). This term was adopted by the World Commission on Environment and Development. This term conveyed the idea of a conservative form of environmental protection, coupled with the continued sustainability of a resource.

Here non-renewable resources were spared and the productivity of renewable resources were maintained or upgraded. Thus, a new form of international relations developed out of the international concern for sustainable development. The implication of the new international relations was the use of resources outside a state’s boundaries. Resources outside national boundaries (any type of resource whether air or water, whether the resource is fixed, mobile or even fluctuating) which are distributed equitably among countries (which implies the regulation of access to a particular resource) is called “global commons” (Pinto 2007)

With the creation of the so-called “global commons,” there was a pressing need to regulated global resources via cooperative means. This implies that countries participating in the “sustainable strategy project” need to realign their policies to that of global institutions like the World Bank and the United Nations (as well as hosts of environmental conferences). This realigning was simple theoretically. Each country must contribute to the maintenance, utilization, and sustainability of resources outside (but not included in the boundaries of other countries) their boundaries.

” Thus, cooperation between these categories of countries took the form of internal and external policy changes (Taylor 2004). External changes were created to strengthen social and economic bonds among countries. The goal, of course, in this first instance, was to main economic equity and distribution of costs and benefits to countries participating in the “global commons area. ” In a report of the World Commission it was declared that … physical sustainability cannot be secured unless development policies pay attention to such considerations as changes in access to resources and in the distribution of costs and benefits.

Even the narrow notion or physical sustainability implies a concern for social equity between generations, a concern that must logically be extended to equity within each generation” (Pinto 2007). Implicit here was the idea that management of international resources must be managed by countries participating in the sustainable development project. It had been recognized that an effective and affective way of managing international resources should be participative and diversified.

Participation ensures the sustainability of available resources. Diversification implies that the resources procured by each nation from the “global commons area” are used efficiently (environment friendly) (Taylor 2004). Because these two characteristics of an effective and affective management of international resources are very difficult to achieve, both developing and developed nations in recent years agreed to consolidate their plans for the use and maintenance (and sustainability) of “global commons area. ”

Consolidation here implies an extended (both in scope and focus) of economic cooperation. Here cooperation must cut across time, culture, and existing political systems to effectively and affectively (affective here means that all decisions regarding the use, maintenance, and sustainability of international resources must be deliberate and rational) managed the “global commons area. ” Consolidation here also implies that the management of resources must be equitably (not equally) shared by all member states (Taylor 2004).

Equitably here implies that countries may use international resources based on their prescribed development agendum. Here both the developed and developing countries are tasked to developed management systems that would take into account group accountability and environment-based economic projects. Thus, cooperation here takes the form of economic consolidation with regard to the use of international resources.

Unlike in the first extent of cooperation, cooperation here becomes the actual tool for sustainability. 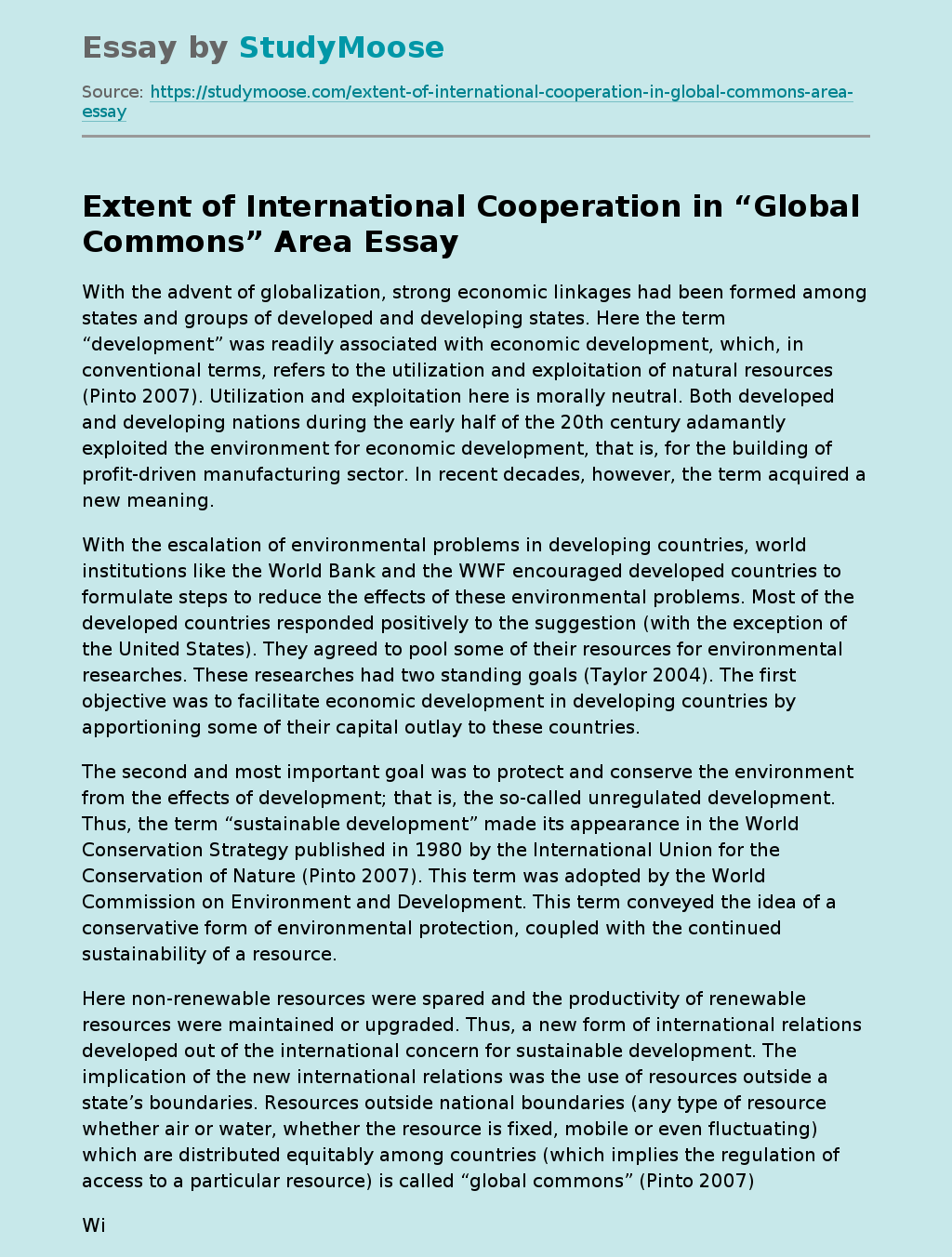