There is a Chinese proverb that says, “One chopstick is easily broken, but ten pillars chopsticks firmly hold dough.” This reveals a simple rule that unity is much stronger than individuals, and if you do not want to be beaten, you should unite and cooperate against enemies together. This proverb can also be used internationally. Global cooperation is important to maintain economy, and improve safety, peace and the environment. Different countries’ economies are linked together, and influence one another in many ways.

Turn in your highest-quality paper
Get a qualified writer to help you with
“ Global Cooperation ”
Get high-quality paper
NEW! AI matching with writer

Hence, in the globalized economies people always worry more about the economic growth and crisis. Trade is the activity of exchanging goods and services. There are many trades, for example, to exchange fish for beef or to pay a taxi for its driving. One of the economic principles is that trade makes everyone better off.

International trade is essential in these days because each country cannot provide the product it needs to serve the whole society, or it will cost more opportunity cost such as time and money in some productions.

In this case, global trade is required. According to the World Trade Organization (WTO), 2013 annual exports valued $18,784,000 million in total merchandise, and valued $4,623,710 million in commercial services (2014). These massive amounts of numbers show the significant value of international trade in the world. China is the largest exporter, and had valued $2,209,626.0 million, which is 11.7 percent of total world merchandises trade in 2013. Also, it had become the world second large economy according to WTO Database.

0 percent of total world trade in 1973 (WTO, 2014). China has an unbelievable growth, and the biggest reason is that China started to switch the closed economy into more tradable market economy and trade much freely with other countries since 1978 (Chinese economic reform). The international trade provides more job opportunities, attracts investments and brings advanced technology, and these are the basic elements in order to gain economic growth. Unfortunately, the drawback of collapsing a big international bank Lehman Brothers is unimaginable – crash the global financial system, credit crunch, and economic regression.

Because of the Asian Crisis in 1997, the Association of Southeast Asia Nations (ASEAN) had been more careful against crises such as no risky loans and strengthened nations cooperation. China decided to set up a $ 10 billion total fund in order to support China-ASEAN work and offer $39.7 million aid to help Cambodia, Laos and Myanmar in financial troubles (Yan, W. 2009). International cooperation is needed for people’s safety such as natural disasters. Disasters are extremely powerful and destroy millions of lives. According to America, the Indonesia tsunami, which is caused by a 9.0 magnitude earthquake in the sea near Banda Aceh in 2004 had killed over 150 hundred of people and created millions of homeless among Southern Asia countries and Africa. However, the number was continuously increasing due to injury and disease.

Governments provided about $2 billion to support those countries in the disaster. This was a global cooperation – many organizations such as Catholic Relief Services, the Red Cross, Oxfam, Caritas and Doctors Without Borders helped to save lives from diseases and water pollution. Because the transportations are damaged the supplies were delivered by helicopters and ships, which were supported by United State Military. Meanwhile, individuals’ donations around the world were greater than the governments’ total amounts, and these would be used in future recovery (2005). These international saving was successful and helped for countless people. Peace is a big issue for people because there are still numerous shouting and wars going on. In addition, the most thing that cause these dangerous issues are weapons.

Weapons are made to protect people, however, they have become more and more powerful especially the nuclear weapons. The total nuclear weapons in the world are enough to destroy the earth! Also the negative effect of nuclear bombs not only it can destroy a city immediately but also spread the radiation, which has decades, even different generation influences after exposure. Since 1945, the statistics show that the total war and violent has diminished. However, this kind of weapon is still being produced in many nations. Safety of citizens is questing because of threats of terrorisms.

They can buy or make nuclear weapons and expose “dirty bombs” (Lifton, R. 2013). In this case, terrorists should be stopped; people should be protected and no nuclear weapons’ threat. Non-nuclear weapons are very important and hard to achieve. In addition, it needs global cooperation – every government does their duty to increase the world level of peace. Most importantly, the global environment affects all lives on the earth, and countries should avoid ruining it. First is the global warming issue, it is a big issue that is caused by human activities and has the additional effect of climate change. In 2009, United Nations Climate Change Conference in Copenhagen had failed to make a worldwide agreement about emissions reduction (Nordhaus, D. 2011).

This is because the disagreement about the distribution of reducing greenhouse gases and its costs. The decrease in temperature is essential because it would affect everyone on the earth. Nevertheless, without governments’ cooperation this goal cannot be achieved efficiently because different places and regions have different situations and meet variable difficulties. For example, if the cost for imposing a high carbon dioxide emissions tax will generate the decline of Gross Domestic Product (GDP), and the influence of economy may even promotes a financial crisis, a government will not choose to do that.

Also, when a country with smaller population but higher per person green house gas emission but another nation which has the opposite situation, their will be conflict when ask them to produce the same amount of emission. These are complicated and hard to negotiate an agreement. However, as the future cost for climate change is too high – decrease in general’s life span and quality, international cooperation cannot stop and require to be done more successfully. Besides, climate change also affects other organisms such as animals and plants. Human activities such as travelling may cause many animals and plants in danger. Decrease in animals and plants will damage the ecological chain even influence the whole planet.

To protect those animals and plants, the Washington Conversation has established in1975, July 1st and called the Convention on International Trade in Endangered Species of Wild Fauna and Flora, and it goal is to ensure the safety of wild species not dangerous because of international trade (CITES). Because the trade is worldwide and every country will affect neighboring countries, CITES needs to make sure every country does their work to stop threat other species in other countries. In general, many things include economy, human lives and other species are interacting with each individual and country. They will promote different but widespread effects. Because of these facts it needs global cooperation to enhance the quality and safety in these fields. Governments should keep improving international action in order to provide a better world for all of lives.

Convention on International Trade in Endangered Species of Wild Fauna and Flora (CITES). Crash course. (2013, Sep 7). The Economist.
International trade and market access data. (2014). World Trade Organization (WTO). Lifton, R. (2013). The dimensions of contemporary war and violence: How to reclaim humanity from a continuing revolution in the technology of killing. Bulletin Of The Atomic Scientists, 69(4), 9-17. Nordhaus, D. (2011). The architecture of climate economics: Designing a global agreement on global warming. Bulletin Of The Atomic Scientists, 67(1), 9-18. Tsunami. (2005). America. 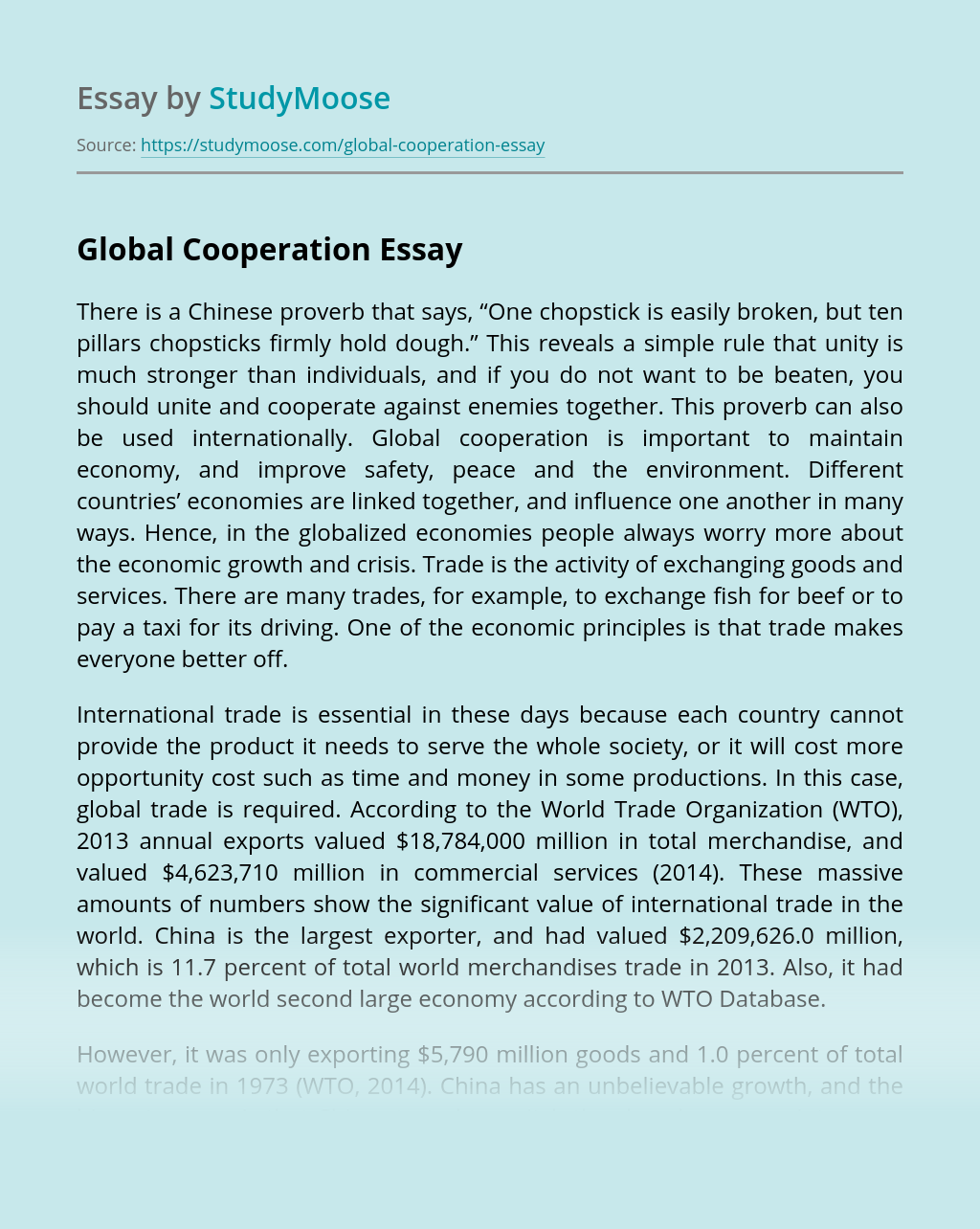 Turn in your highest-quality paper
Get a qualified writer to help you with
“ Global Cooperation ”
Get high-quality paper
Helping students since 2015
Stay Safe, Stay Original