The Reasons for Global Inequality

Global Inequality has been and will remain to be an ever pressing issue of concern across many subjects and specifically that of economics. The industrial revolution and globalization are great catalysts to why some nations are so rich and others so poor as they allowed for competition and specialization. There are many other factors as to why certain nations are poor and others rich, arguably historical reasons, structural reasons, abundance of resources and fops, lack of diversification, political issues and systems, geographical issues and topology and the controversy of culturally related poverty due to social factors such as work ethics.

Don't use plagiarized sources. Get your custom essay on
“ The Reasons for Global Inequality ”
Get custom paper
NEW! smart matching with writer

Through the analysis of numerous factors, this essay will attempt to stem out the reasons of contemporary Global Inequality. Looking at a Nation’s history can be the simplest indicator of whether it is a Rich or Poor country. It is only natural for a nation that has industrialized early to be in a relatively wealthy situation compared to nations that have industrialized later on or are still industrializing.

Not only did that state have the advantage of time on their side, but due to their early industrialization they would have been able to resist resource depleting colonial activity and the issues of economic dependence that are associated with Imperialism.

This is illustrated today with the wealth of the West who have embarked on colonialism and have benefitted economically from it as they monopolized markets that allowed them to sell their surplus produce to the colonies without the issues related to competition while simultaneously having access to another Nation’s resources.

On the other hand, Sub-Saharan Africa today is in extreme poverty as they were arguably the biggest victims of the Imperial Era and the ‘Scramble for Africa’. Many African nations have lost plenty of valuable resources due to Historical reasons that have arguably crippled their economies, moreover, most African nations are economically undiversified and depend on the primary export of commodities such as coffee for Ghana and Oil for Nigeria. This is also arguably due to the specialization induced on them by the Western Colonial powers. Political systems and institutions also play a role in dictating a nation’s economic wellbeing. Some analysts claim that the poverty in South Asia and Sub-Saharan Africa is not due to Colonial history but rather due to the corruption and inappropriateness of the current governments in power.

Corruption is perhaps the worst of government failures to an economy as it results in mass inequality and a loss of incentive to the working class. Inequality, especially that of an extreme level can hamper Economic growth, as the wealth is in the hands of few, only a small margin of it will be spent, as the wealthy usually have a lower Marginal propensity to consume compared to the poor resulting in lower levels of consumption (i.e Aggregate Demand) and thus lower levels of growth. In comparison to the Socialist Economic models of the Nordic nations (Sweden, Norway and Denmark) and Germany, who have managed to sustain high levels of growth due to a robust taxing system that helps correct the extreme inequalities associated with the Capitalist systems. When bribery and informality underpin the rule of law, firms are discouraged to invest in that particular country and will invest elsewhere, resulting in a loss of potential investments and thus growth. Moreover, tax revenue would not be spent appropriately in a country that could be in desperate need for robust fiscal spending to stimulate the economy, keeping the country poor. Aside from corruption, the political system itself could be a factor of a nation’s wealth.

When China abandoned communism and embarked onto economic liberalization, its GDP saw a tremendous increase as investment rose and exports rose due to approval and support of Western nations to the opening up policy and due to the arguable increases in productivity and efficiency as an economy becomes more market oriented. In terms of institutions, the stability of law and the effectiveness of the government in tax collection and stopping tax evasion is imperative for a country’s wealth. This is because a strong rule of law increases investments into that particular economy, a prime example would be Britain and its relatively safe and supportive environment for investing as property laws are well established compared to a country such as Mexico. Moreover, a strong rule of law means less tax evasion and thus better fiscal policy and control over the Economy which will allow it to conduct appropriate Keynesian policies and thus manage the economy appropriately. Aside from the socially constructed factors of politics, a country could be poor due to reasons beyond their control.

Natural resources can be vital for a nation’s economic growth and its wealth, especially during the early stages of development. The Arab states have managed to completely transform their economies during the second half of the 20th Century due to the discovery of oil reserves. Exploiting Natural Resources will lead to higher domestic produce and thus higher growth. Exporting these natural resources can also lead to a favorable position in the current accounts under the Balance of Payments. Other natural factors could affect the state of the Economy, such as that of Geography and climate. Nations under the constant threat of natural disasters usually also suffer from Economic problems as production could be halted due to infrastructural and humanitarian issues involved. Nations still operating mainly in the primary sector are said to suffer from this especially hard as they are less resilient due to a lack of technologies to tackle the problems associated with disasters, this is especially true with Sub-Tropical countries such as Bangladesh that have had many food shortages due to frequent flooding that damages Agricultural yields and thus overall GDP figures. Access to trading ports and the sea can help stimulate economic growth and cause a country to prosper.

Historically, Nations with access to the seas and control over strategic positions have also been relatively wealthy. Egypt had over 7% of its GDP dependent on revenue created from ships accessing the Suez Canal, the Turks have prospered significantly through their ports near Constantinople. The economic benefit gained from access to the sea was so significant that it led to Serbia waging war in the early 20th Century. However, as transport technology progresses and the Global economy takes a neo-liberal approach, access to the sea is becoming less and less imperative in a country’s trading activity. Switzerland is an example of a very developed nation with no access to the Sea. Another less significant yet still helpful feature is a Country’s topography. It is said due to Britain’s perfect Time zone, it is able to trade both with East and West constantly. There are some observers who point to a very different and controversial factor of why nations are rich or poor, claiming that some Nations have built a culture of hard work and productivity which is why they are rich and others are poor.

While this is highly ambiguous and perhaps offensive, it still explains how Nations such as Japan and Germany who are not necessarily resource rich and have been in numerous depleting wars yet are still extremely well off due to the sheer productivity of their Human Capital. However, this theory of Cultural differences ignored the negative and long lasting effects that colonialism had on the poorer nations of today. Finally, some explain the status-quo of global inequality by blaming the Global-Political structure instead. Wallenstein’s World System Theory states that in order for the Global Economy to function, there must be a global division of labour. The Richer nations, known as the Core Countries usually produce services and invisible exports. While the Peripheral and semi-peripheral nations (the poor countries) provide the primary and manufactured goods of the Global Economy.

Nations can deviate from positions of being Core nations to Periphery, for example Russia, and from being Periphery nations to Core Nations, for example South Korea and China. As indicated above, the reasons for Global inequality are abundant. Thus, one cannot effectively state one reason why Nations are rich and other poor. Looking at the history of the contemporary poor and Rich nations of the globe, we will see different reasons for their current Economic condition, whether it is their colonial past (Sub-saharan Africa), their current political turmoil, such as that of the Arab spring Nations, their abundance of Fops (such as the rising Asian super-powers of China and India) or simply (and arguably) their culture of work-ethics (Japan). Thus to conclude, each nation has its unique combination of factors to why they are rich or poor.

The Reasons for Global Inequality. (2016, Mar 06). Retrieved from https://studymoose.com/the-reasons-for-global-inequality-essay 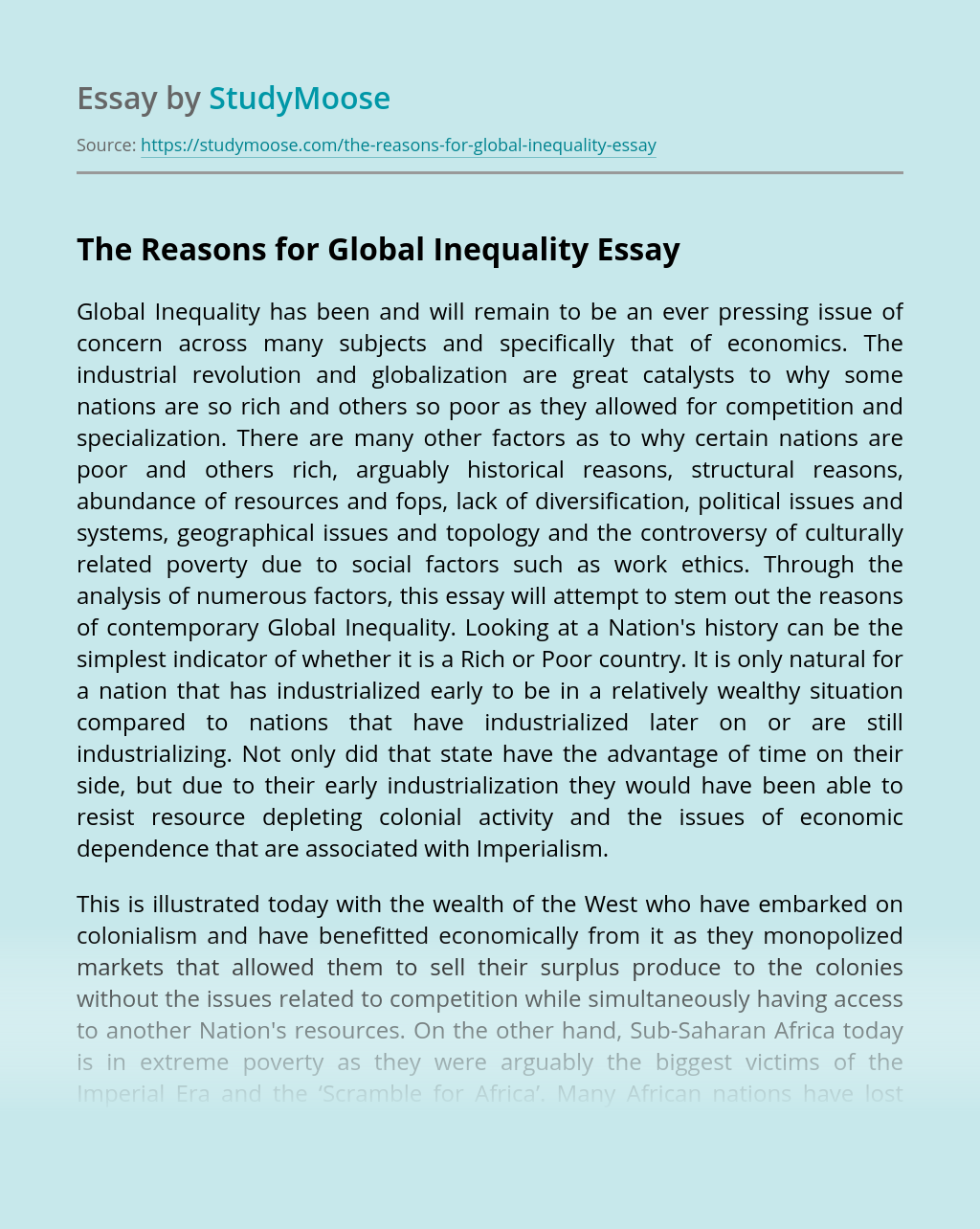