Gender Inequality in Media and Entertainment

The media is one of the strongest instruments to distribute mass information. It ought to be used as a platform to influence the attitudes and culture of Australians towards gender equality, opposed to reinforcing gender stereotypes. Advertising reflects society in a distorted fashion, calling attention to and exaggerating some aspects of our lives and hiding others. The representation of women reinforce their position of inequality through gender roles and body images displayed in advertising along with how advertisements have been used as gender scripts.

Don't use plagiarized sources. Get your custom essay on
“ Gender Inequality in Media and Entertainment ”
Get custom paper
NEW! smart matching with writer

The rules for femininity have come to be culturally transmitted more and more through standardized visual images. As a result, femininity itself has come to be largely a matter of constructing … the appropriate surface presentation of the self … We learn the rules directly through bodily discourse: through images that tell us what clothes, body shape, facial expression, movements and behavior are required

(Bordo, 1997, p. 94). In terms of gender roles, content analytics studies generally highlight that the depiction of women circulates around a woman being represented as sex objects, (Carpenter, 1998; Ferguson, 1990).

Often women that have been sexualised are seen as a decorative object, one that is desired by men. The widespread of media images of highly sexualized women, is hypothesized to maintain men’s dominance by designating women’s bodies as property that can be evaluated, looked at, and touched at the impulse of men’s desire. In figure 1, the advertisement depicts four men, two of which are topless and are standing around a woman in heels who’s wearing a revealing black body suit which exposes her legs.

The most important part is their postures. The woman is lying down on her back, and one of the topless men is literally on top of her holding her wrists down. It gives us the impression that she is being dominate and is helpless. The woman is also outnumbered by males, supporting the male domination and showcasing gender-power relations. All the models are very attractive. The men all have defined abs and large muscles. The woman has long legs, a small waist and of course a pretty face. The woman can also be depicted as being subservient to men as she is below all men, lying on her back.

Gender Inequality in Media and Entertainment. (2021, Feb 08). Retrieved from http://studymoose.com/gender-inequality-in-media-and-entertainment-essay 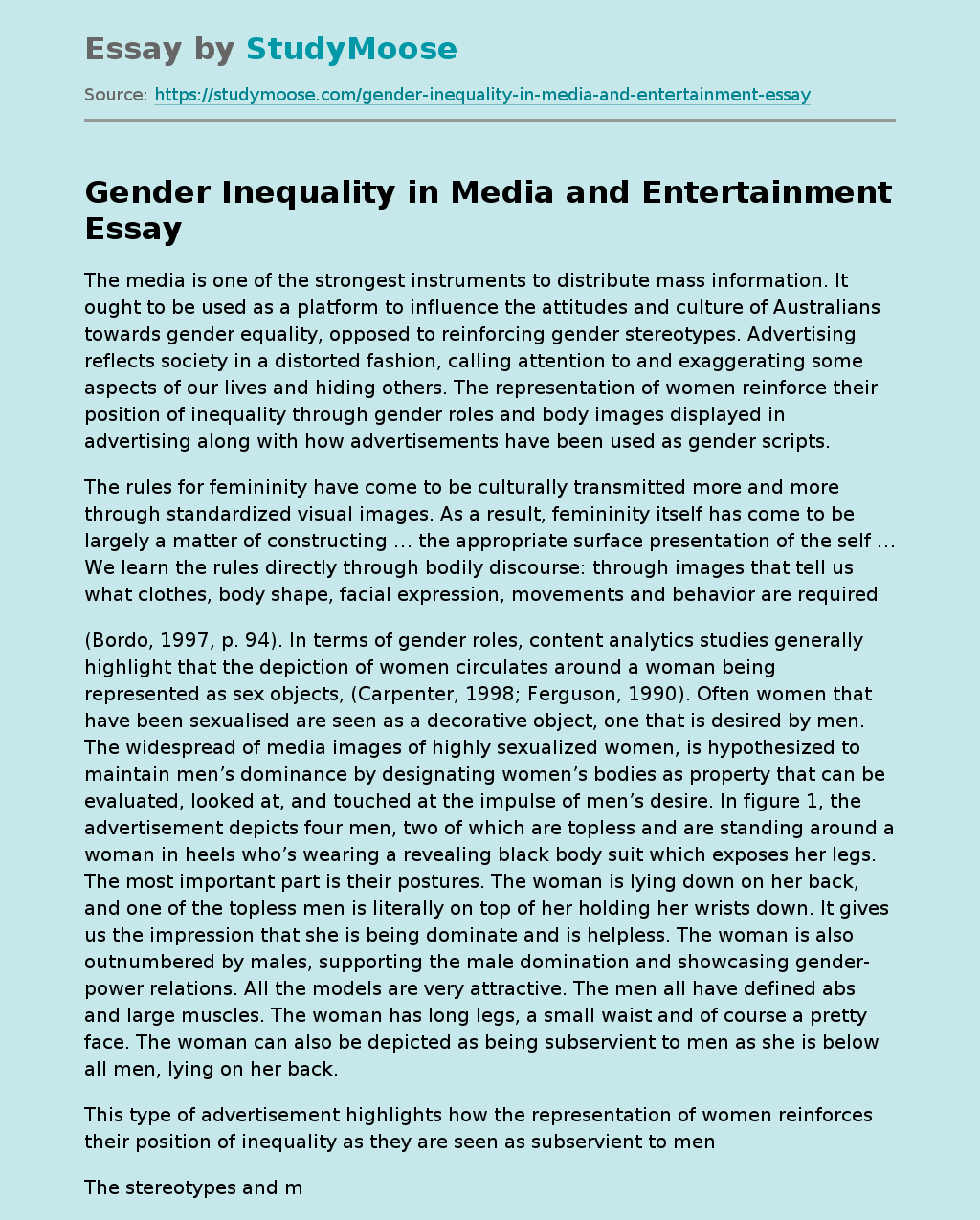