Entertainment is a fun, enjoyable, leisure activity for consumers to amuse their time with. People do what they need to survive, meet their basic needs, and can fill up the rest of their time with entertainment. Therefore, it is no wonder that the media is able to invade entertainment such as film, television, Internet, books, games, and music, to aggressively persuade the consumer minds. It is nearly impossible not to be influenced by the multitude of entertainment media in the world today.

Don't use plagiarized sources. Get your custom essay on
“ Influence of Entertainment Media ”
Get custom paper
NEW! smart matching with writer

Because of the media’s ability to remain in entertainment, Americans are exposed to all kinds of influential material.

The information provided through these materials can increase one’s ability to learn, communicate, and become a knowledgeable citizen in today’s world. However, this material also has the ability to influence society’s norms, which can result in brainwashing, or worse, an individual who ignorantly follows. The various forms of entertainment media have shaped American culture and its values.

Upon the discovery of the United States of America, books, games, and music were the main forms of entertainment. However, these forms were not a common part of the everyday American’s life due to the basic need of survival.

Instead of leisure time, Americans would work throughout the day to attain food and shelter, leaving little time for entertainment to make its way into their daily routine. Therefore, the media did not use many forms of entertainment during this period in time, due to the lack of demand. Once the Industrial Revolution hit, the amount of leisure time the average American could allot each day skyrocketed.

With the increased leisure time came an increase in demand for entertainment. Throughout the following years came the introduction to television, films, and the Internet.

The demand for this entertainment followed with the attempt and success of the media entering into the entertainment world, and thus into the daily lives of the average American. As of recent, one of the most influential people in the entertainment media industry is Oprah. She is well known for giving her “blessing” on products and services, she promotes books that turn to best sellers almost instantly, and she has brought new audiences to Broadway.

This single individual has so many followers that if she “were a nation, her 51. million weekly viewers and magazine readers would equal more than the population of Canada” (Ulrich, 2006, para. 21). This shows just how much of an impact entertainment can have on American culture. It is no secret that entertainment media can influence an individual both consciously and unconsciously, but what is unknown to some is that the general public now has the power to express themselves through entertainment. Time, a top-selling magazine, stated that “you control the media now, and the world will never be the same” (Blummer, 2006). This statement has shown how American culture has changed over time.

Individuals can express themselves through a variety of sources, such as YouTube, which past generations did not have access to. Entertainment media’s strength is based on how well they can manage their trends. With this management comes the molding of societal behaviors and attitudes. Although the 21st century has expanded the ability for the individual to view his or her opinion, overall, media has kept its influential power over the human mind throughout the use of entertainment. Until the social norm is to be an informed individual, entertainment media will continue its hold on society norms. 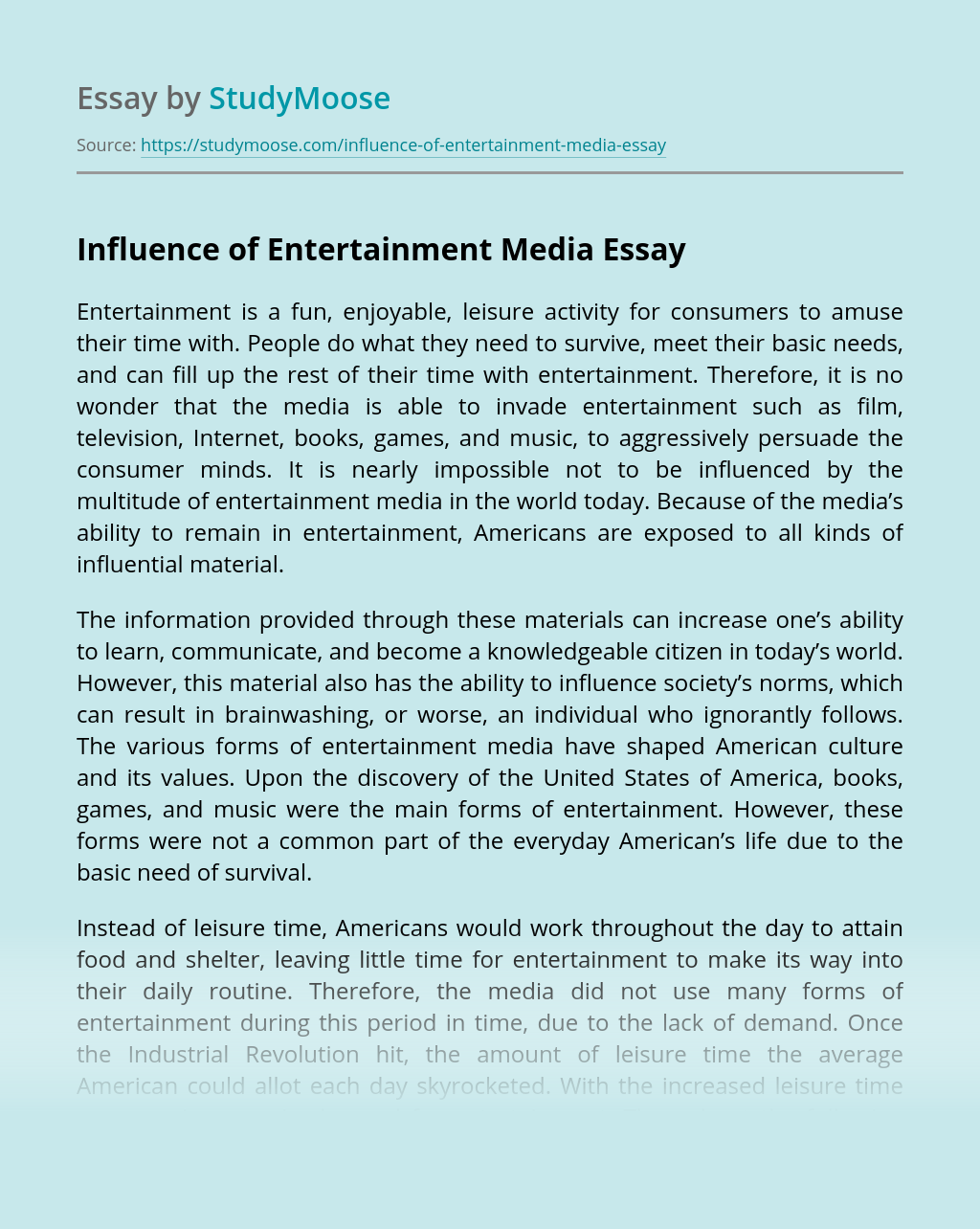