Are Professional Athletes and Actors Overpaid

In this essay I will explore a much debated topic in this country pertaining to the undeniable fact that professional actors and athletes overwhelmingly get paid much higher than the average American. As any highly debated topic, there are always arguments and viewpoints from both sides of the spectrum. Like many Americans, for entertainment I thoroughly enjoy watching both film and professional sporting events. Even though, I have always maintained a firm stance that many in these professions are simply overpaid.

Don't use plagiarized sources. Get your custom essay on
“ Are Professional Athletes and Actors Overpaid ”
Get custom paper
NEW! smart matching with writer

I believe once you have read my research and analysis on this topic, you as well will agree from a sociological, economical and even ethical perspective that they are grossly overpaid. Proponents of the film industry or “Hollywood” and the pro-sporting industry would contend that they are simply providing for a demand. These two industries do provide for Americans some of the most enjoyed and popular forms of entertainment in our society today. These industries not only provide earnings to the actors and athletes but also provide jobs to many other Americans as well.

Like any successful industry, those who provide the primary service to that industry will in turn be rewarded appropriately for their contributions to its success. Both actors and pro-athletes would argue that attaining their current level of success was not easy as these jobs are very competitive.

Also, there are many times huge expectations to perform and stress that come with the job and the celebrity status. Some pro-athletes such as football players, would also argue that after they retire, their physical condition has declined much earlier in life due to years of physical trauma and injury and performing in other jobs post-career is many times difficult.

As I wrote earlier, there are arguments from both sides of the spectrum. Let’s begin to analyze from the other viewpoint not ignoring the other side’s arguments and include some of the fundamental and sociological reasons of our need and demand for entertainment. Looking back to the era of the “Roaring 20’s” in which America was enjoying a period of sustained economic prosperity, the average American could at a higher level afford to enjoy different forms of entertainment than previously. This ushered in a new era and cultural dynamic which emphasized organized sports, theatre, and film. Since this era, America has seen economic depression, recession and crisis, but has still remained the wealthiest country in the world.

Due to this, the entertainment culture that was created roughly 100 years ago still exists today, and the demand for it continues to grow. Each year more and new gaming devices, games, videos, movies, and television shows are released. Likewise the costs of these products and devices continues to go up. The unfortunate side to this is that it has created a more sedentary lifestyle and culture of everyday America, and in turn attributing to issues as obesity amongst both children and adults. Regardless, we have developed and created this culture with the associated increased demand for this form of entertainment, and the industry is nothing more than happy to oblige us in providing it. In a study conducted by USA TODAY and Statista of top paid Hollywood actors, it found that Robert Downey Jr. earned over $75 million in a one year timeframe from June 2012-June 2013. Much of his earnings were a result of his roles in both “The Avengers” and “Ironman 3,” with “The Avengers” alone grossing $1.51 billion in box office sales making it the highest grossing movie of 2012 worldwide. Liam Neeson who was ranked as the 10th top earner, grossed over $32 million in the same timeframe.

According to the Daily News, Samuel L. Jackson is titled with being the highest grossing actor of all time with earnings of $7.42 billion throughout his film career. Floyd Mayweather Jr. who is a pro-boxer has earned a total of $90 million in 2013 from winnings alone, making him the top pro-athlete earner according to Sports Illustrated. Mayweather has achieved such a high status that it is common for him to have a guaranteed win-or-lose purse of around 30 million per fight. Pro-basketball player Lebron James who is at number two in the rankings, earned over $17 million in salary and a staggering $39 million in endorsements alone for 2013. The list goes on and on with astronomical numbers that get higher and higher each year in passing.

There is essentially a fundamental question that is raised in regards to all of this, “What individual is simply worth that much?” The services provided by these individuals is simply for entertainment alone. What is provided does not contribute to the functionality or betterment of our society. There was a time when acting or professional sports were a second job in which an individual would perform due to their love for the sport or art. After all, a sport is something that is played for enjoyment by the rest of us because it is enjoyable. They get paid millions while the rest of us do it for fun. Being the die-hard Green Bay Packer fan that I am, I scream and yell and root for my team as hard as or harder than the other fans. When my team loses or Aaron Rodgers has a bad game I can find myself feeling down and upset. Some fans feel as if their whole day or week is ruined if their favorite team loses. I think it is they that always have the last laugh. At the end of the day he or she is disappointed but regardless they’re still making millions. When Mayweather has a bad fight, he still takes home his $30 million. In a way we are all pawns in their game, and we are always the losers.

As we look at wealth distribution in the U.S., many of these actors and athletes fall into the wealthiest 10% of Americans. According to James M. Henslin in Essentials of Sociology, 70% of our nation’s wealth is owned by this top 10%. To break this down even more, the top one percent owns 1/3 of all U.S. assets. The average per capita income in the U.S. is only $42,000 per year (194). The other 90% who is the fan base that provides the majority of the income of these actors and athletes, are seeing this income gap continue to widen. Even with the recent recession in our economy, the rich as a whole statistically remain unaffected. The rich get richer and the poor get poorer. The strong middle class that once was the backbone of our economy is slowly diminishing and sliding to the left. This middle class are the firefighters, police officers, and service members who protect and serve our communities and country. They are the structure of society who provide strength and functionality and who ultimately serve to the betterment of us all. There is much debate on how wealth should be distributed. A capitalist society has proven for the U.S. to be effective and be partially credited with building the foundation of all of the wealth and creating the richest country in the world.

Completely socialist societies have proven in history to be a failure. Typically there is a Darwin Effect of “Survival of the Fittest” which dominates. There obviously needs to be some middle ground here, but finding a solution is difficult. In this case of actors and athletes, I believe us as the consumer and their supporters have the power to control this huge inequality and disparity by saying, “Enough is enough!” and demand that some rationale come into play. Paying these individuals this much money is simply ridiculous in my opinion. Fundamentally we as a society should give value to those professions which serve us in a way that promotes a more sustainable society.

Are Professional Athletes and Actors Overpaid. (2016, Mar 13). Retrieved from http://studymoose.com/are-professional-athletes-and-actors-overpaid-essay 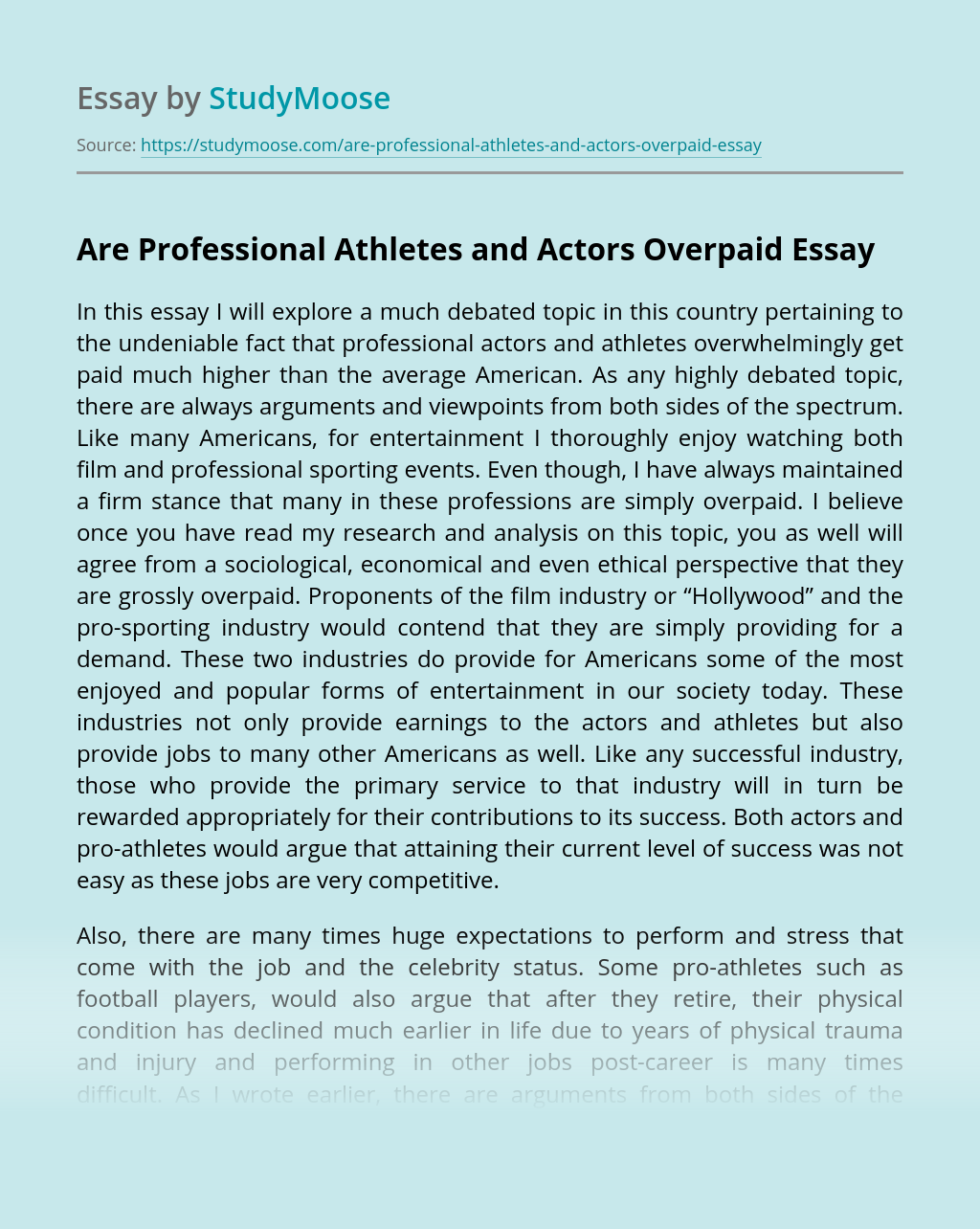