Investments of any size require a meticulous and objective study of a company’s financial soundness and future potential. In order to choose between two specific companies, a detailed analysis and comparison of both recent financial earnings reports and historical performance is necessary. The potential investment of 200,000 in either British Airways plc or easyJet plc must be weighed carefully. As the companies perform two different functions within the airline industry (one a major international airline, the other a small, low-fare airline), the weight of each company’s balance sheet are vastly different.

Don't use plagiarized sources. Get your custom essay on
“ Financial Earnings in Airline Industry ”
Get custom paper
NEW! smart matching with writer

An investor must first determine the overall health of both British Airways and easyJet, and then evaluate each company’s growth to determine which company is the better investment. British Airways is one of the world’s largest airlines with 245 aircrafts in its fleet. It carried more than 33 million passengers in its most recent fiscal year (ending March 31, 2008). British Airways has a long history and is well-regarded for its services.

Its six-month Interim Management Report was released on 7 November.

Chief Executive Officer Willie Walsh said, “Against [a] very tough economic backdrop we have delivered profits of 140 million resulting from a 6. 4 per cent revenue increase” (British Airways, Interim Management Report, 2008, p. 1). This jump in revenue came from increased cargo and passenger revenue, up 25. 2% and 6. 5% respectively versus the same period in its last fiscal year (p. 2). The company, however, has been struggling with rising costs. Fuel costs, up 52% compared to the previous timeframe, pushed operating costs up 18. 2% (p. 2).

With fuel costs rising dramatically over the past year, and the global financial crisis stymieing consumer spending, it is necessary to review historical financial reports to put these most recent earnings in context.

For the fiscal year ending March 31, 2008, the company reported revenue of 8. 753 billion, an operating profit of 875 million, and group earnings of 59. 0 pence per share. Compared to the previous fiscal year, these figures represent increases of 3. 1%, 45. 3% and 131. 5% respectively (British Airways, 2007/2008 Annual Report and Accounts, 2008, p. 3). Additionally, fuel costs for the entire fiscal year climbed only 6. 5%. Here are the same figures for the four previous years: Over the past five fiscal years, British Airways has consistently increased revenues, operating profit and group earnings per share, barring the financial difficulties that began in the second half of 2007 and have continued through 2008. Additionally, company costs, like employee costs, aircraft lease costs and IT costs, improved in the year ending March 31, 2008 (British Airways, 2007/2008 Annual Report and Accounts, 2008, p. 14).

These figures did rise, however in the first half of the 2008/2009 fiscal year, though some increases were out of British Airways’s control. For example, London’s airports increased landing fees and en-route charges 13. 4% (British Airways, Interim Management Report, 2008, p. 2). In order to reduce costs and remain competitive in today’s financial environment, British Airways is cutting capacity by 1% in 2009 by canceling four routes. The company is considering the cancellation or deferral of several major projects. This, however, is a recurring theme among all major airlines.

In the meantime, British Airways expects revenues to grow by 4% for its 2008/2009 fiscal year, while it continues to increase yields buy cutting costs. EasyJet is a very different company. While British Airways flies routes around the world, easyJet is limited to the UK, mainland Europe and a select few other destinations. The company has been growing, though. In 2003, easyJet had 74 aircraft in its fleet. At the end of 2007, the company had 137. EasyJet uses the internet and a no-frills approach to keep prices low and attract customers. For example, the company does not offer food on its flights.

Cost-cutting measures like these have allowed easyJet to increase revenues quickly. Its interim report for the first half of 2008 found that total revenues climbed 24% to

892. 2 million, a mere 10% of British Airways’s revenues (easyJet, Interim Report 2008, 2008, p. 1). Passenger numbers have increased by 15% as well. The company said, “easyJet has continued to develop its business successfully with passenger numbers increasing by 15% to 18. 9 million and total revenue per seat increasing by 8. 1%” (p. 2). But, like British Airways, climbing fuel costs have severely affected easyJet’s operating profits and margins.

Fuel costs for the company climbed to 87. 1 million, up 42% from the first half of 2007. Expansion and acquisitions have also weighed heavily on easyJets balance sheet. Using the same criteria as was used for British Airways, easyJet’s financial figures show revenue of 892. 2 million, operating profits of -72 million and earnings per share of -10. 3 pence per share. These figures represent growth of 24%, -66% and -70% respectively (p. 9). These figures show that easyJet is struggling in today’s financial circumstances.

While once experiencing steady growth in operating profit and earnings per share, the first half of 2008 shows easyJet well behind its former growth rates. EasyJet may see a slight increase in revenues for the full year of 2008, but its operating profit and earnings per share may see sharp decreases. EasyJet has been growing its fleet and expanding its routes at a very fast rate. In 2007, the company increased its capacity by 29. 9% for its European destinations. It added eight new destinations and 46 new routes. It increased its fleet to 137 planes, and is anticipating a further 120 planes (easyJet, 2007 Annual Report and Accounts, 2007, p. 3).

EasyJet also acquired GB Airways on 31 January, 2008, but the airline did not begin operations with easyJet until 31 March, 2008 (easyJet, Interim Report 2008, 2008, p. 5). As a result, the acquisition has added significant costs to the first half of the year. A charge of 9. 1 million is listed on its consolidated income statement (p. 9). As with British Airways, airport costs have also impacted easyJet’s balance sheet. Airport charges increase by 22. 6% (p. 9). The company does report that ancillary revenue climbed 82. 9%. The largest factor in this increase has been the introduction of a checked bag charge.

According to easyJet, 75% of its customers check a bag (easyJet, Interim Report 2008, 2008, p. 5). The amount of revenue brought in under ancillary heading is 141. 2 million (p. 5). However, the company notes, “The introduction of the checked bag charge has, as expected, resulted in a small decline in passenger revenue per seat” (p. 5). Outlook for the remainder of the year included a robust number of summer bookings scheduled. The company did warn that fuel costs would not be fully offset for the year. And the GB Airways acquisition may result in an additional 12 million in integration costs (easyJet, Interim Report 2008, 2008, p. 3). This combination of costs and charges will negatively affect the company’s full year results, particularly earnings per share and operating profit. The following chart compares the growth rates in revenue, operating profit and earnings per share for both British Airways and easyJet for the most recent reporting term. British Airways easyJet Revenue 3. 1% 24% Operating Profit 45. 3% -66% EPS 131. 5% -70% Over the past five years, British Airways has averaged a 2. 64% increase in revenue, a 26. 22% increase in operating profit, and a 68. 24% increase in earnings per share. EasyJet, on the other hand, has averaged 28. 12% revenue growth, 26. 68% operating profit growth, and 26. 38% earnings per share growth. These findings suggest two things: that British Airways is the more efficient company, and that negative economic factors and rising costs affect easyJet more than British Airways.

In conclusion, British Airways has reported consistent and steady growth numbers over the past five years, barring the 2007 irregularity. EasyJet has produced erratic results, some spectacular, others devastating. In a time of turbulent and changing economic conditions, this report finds that British Airways is the better investment choice, for its stability, size, and consistency. 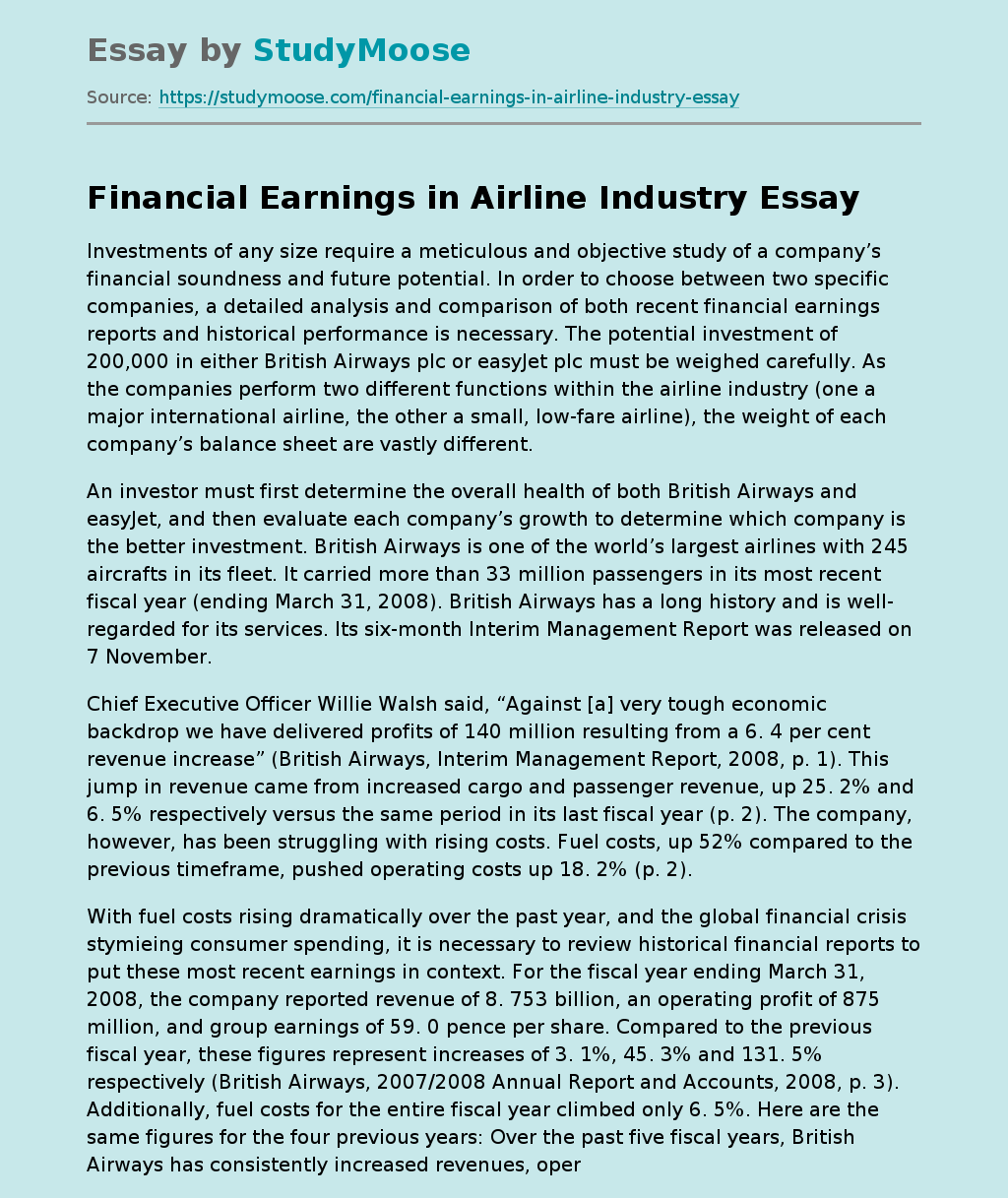