WorldCom, the telecommunications giant, once was the largest telecommunications company in the world, with more than $30 billion annual revenue, $104 billion in assets and more than 20 million customers. John Sidgmore (2002), Ebbers’ successor after the scandal, said “WorldCom is a key component of our nation’s economy and communications infrastructure.” However, the giant collapsed in 2002.

A commonly acknowledged definition of earning management by Healy and Wahlen (1999) demonstrates that managers implement personal judgement in financial reporting and transactions to manipulate financial reports for misleading some investors about a company’s financial performance or influencing contractual outcomes that reply on the numbers.

Turn in your highest-quality paper
Get a qualified writer to help you with
“ The Earnings Management Issue of WorldCom Case Study Report ”
Get high-quality paper
NEW! AI matching with writer

Based on several researches, Lawrence (2009) concludes that earnings management generally involves some level of deceptions, and its accounting manipulations usually motivated by negative behaviours such as opportunistic maximization and avoiding debt covenant violations. Nevertheless, others argue it is unreasonable for managers to manage short-term earnings which will be adjusted in future, and it is a way of releasing blocked inside information (Healy and Wahlen, 1999) and so on.

1.2.1 The Incentive of Earnings Management for Personal Compensation Plan

Daniel and Thomas (2006) states that if CEOs’ potential total compensation is more closely related to the price of stock and option holdings, the firms are more inclined to manipulate reported earnings. In the WorldCom case, in 2002, the CEO, Ebbers personally held 27 million shares of the company; he even borrowed some money to buy WorldCom’s shares (The Wall Street Journal, 2002).

Hence, Ebbers had high level of motivation to manipulate reported earnings to inflate share price for personal benefits. 1.2.2 To Meet Expectation of Analysts and Industry Observers Secondly, Burgstahler and Eames (1998) indicate that firms manage earnings for meeting analysts’ forecasts, especially to manipulate earnings upward to avoid falling to meet analysts’ expectation. Failing to meet the expectation would lead to a plunge of the company’s stock value (Skinner and Sloan, 2002). As for the WorldCom case, the E/R ratio, the most important performance indicator, was closely observed by industry, which put significant pressure on WorldCom’s senior managers.

Releasing Accruals. From 1999 to 2000, CFO Sullivan and Controller Mayor forced employees of sub business units to release accruals of line cost which they claimed was too high relative to future cash payments. And the left accruals were below the amount of cash the company have to pay in future. Overall, in-between 1999 and 2000, $3.3 billion worth of accruals were released. Capitalizing expense. At the beginning of 2001, there were so few accruals left to release that Sullivan had to start a new method – treating line costs as capital expenditure rather than operation cost. This action totally violated accounting rules, because the expenditure had been consumed already and there were no future benefits at all. As a result, in April of 2001, $544 million of line costs was capitalized.

1.4.1 Differences Between Earnings Management and Fraudulent Reporting Earning management means manipulating reported number for certain purposes through objectively selecting and judging accounting methods which may be misleading. The Treadway Commission Report (1987) states fraudulent reporting as deliberate or irresponsible behaviours, whether act or commission that causes materially misleading financially. The Panel on Audit Effectiveness (2000) demonstrates earnings management has little difference from fraud reporting. In many occasions, fraudulent reporting is considered as an extreme point on the scale of earnings management (Lawrence, 2009).The line between earning management and fraudulent reporting seems blurred. Despite the difficulties, there are researchers trying to scale and distinguish the differences. Stolowy and Breton (2004) categorise “accounting manipulation” into “creative accounting”, “earnings management” and “fraud” based on if the manipulation is intent to affect wealth transfer among company and society, funds providers or managers.

Dechow and Skinner (2000) try to classify levels of violating GAAP between “conservative accounting”, “neutral” earnings and “aggressive accounting”, if a choice violates GAAP beyond “aggressive” accounting and demonstrate clearly intention to deceive, the choice is seen as “fraudulent”. Similarly, Nelson et al. (2003) suggest that the management choices are complied with GAAP should be judged. Lastly, “fraud” usually be concerned relating to illegal disclosures of reporting. To summarise the differences between earnings management and fraudulent reporting based on above researches, a line should be drawn, with certain elements of the accounting choices – intention to deceive, affecting on wealth transferring (harmful result to stakeholders), violating GAAP heavily and lastly infringing laws.

1.4.2 Judgements for This Case

The facts of the case, which senior managers released accruals and capitalized the line cost to enormously undervalue the line cost, had clearly violated GAAP. Furthermore, by providing manipulated earnings, senior managers were intending to deceive the market, which could benefit them. And their actions infringed the law and they were punished by SEC. Hence, It could be concluded that WorldCom senior managers’ behaviours were far beyond the line of earnings management, and thus became fraudulent reporting.

2.1 Why Were Not WorldCom Managers’ Actions Detected For Three or Four Years? For this case, a number of contributors should be concluded:

2.1.1 The Audit Scheme: External Auditor and the Audit Committee In the WorldCom case, the external auditor Arthur Andersen failed to perform its duty.

For instance, it did not respond to WorldCom employees’ tips, neglected the computer system’s warning, not reported some abnormal behaviour to WorldCom’s audit committee and not cooperated with Ms Cynthia Cooper. An audit committee should perform as an efficient system by concentrating on issues relevant to financial report’s integrity (CGPR, 2010). However WorldCom’s audit committee was given false information and held meeting once a year, each session lasting less than five hours. Moreover, when Ms Cynthia Cooper brought the question to the committee, the committee did not act and seemed controlled by Sullivan. 2.1.2 Company Culture (Ethical and Responsible Decision-Making) WorldCom did not have a code of conduct. Under Ebbers’ and Sullivan’s control, the company had a rigid culture which was to promote employee’s compliance rather than questioning or challenging their superiors. For example, challenging more senior managers would lead to personal criticism or threats. Furthermore, Ebbers and Sullivan specially promoted and compensated employees who showed loyalty. Moreover, ordinary employees felt there were no independent outlets for them to express concerns and company policies or behaviours.(In 2012, ACEF’ report Shows 43.3% occupational frauds are detected by tips, and 50.9% tip providers are employees) (ACFE, 2012)

2.1.3 The Failures of The Board (Except for the Audit Committee): The board was presided by Ebbers rather than the Chairman;

Outside directors did not communicate with WorldCom’s employees regularly, they were distant and detached form the working of WorldCom; Before April of 2002, the external directors had not met by themselves; Remuneration policies were controlled by Ebbers instead of the remuneration committee; Information disclosed in the board meeting was limited, agenda was intentionally manipulated. In conclusion, as the contributors shown above, due to underperformance of the outside auditor, the audit committee, the board of directors, and the company’s stringent culture, the external auditor Anderson did not find the manipulation; Because of afraid of “revenges” from senior managers, employees would not dare to communicate with outsiders; The board, was controlled by Ebbers and Sullivan, did not act their duties. Consequently, the fraud was not detected in the period.

2.2 Process or Systems Should Be placed for Detection

For detecting fraud reporting, by applying CGPR (2010) and personal judgements, several mechanisms, actions or improvements should be deployed.

A responsible and truly independent external auditor should be hired; A well-structured audit committee: it contains only non-executive directors, a majority of independent directors, be chaired by an independent chair, who is not chairman of the board and with three members (at least); The Audit Committee shall establish an official charter.

The company should have a code of conduct and disclose the code; Promote gender diversity; Encourage timely and balanced disclosure of all material matters concerning the company; Empower employees to express themselves independently.

The chairman should be an independent director and truly perform their duties; Disclose the ways for evaluating the board’s performance, the committees and directors.

Ms Cynthia, as Director of Internal Audit in WorldCom, did fulfil her duties, and revealed the improper entries. She challenged Sullivan in the audit committee meeting, and expanded internal audit scope without telling him. In contrast, Ms Betty, the director of management reporting, a good following order “corporate soldier”, was afraid of losing her job and other personal benefits, therefore did not dare performing against senior managers and was being induced into the fraud bit by bit. In the end, Cynthia reported her findings to the audit committee in Washington D.C. and the fraud was made public. As the case shows, Cynthia stood for and had courage to do what she believed was right due to her strong willed ethic standard (Time, 2008). However Betty concerned her personal (losing her job) and family benefits more and was timid.

What I Would Have Done?

As a future accountant, working ethically and responsibly for the company and serving the best interests of stakeholders should be fundamental. If I were Ms Betty, there were several actions I could do.

Because of the entries obviously violating GAAP, I would refuse Sullivan’s requirements directly and report the issue to internal audit department or other superior officers who would control the situation. Meanwhile, I would start to consult a financial lawyer for further actions and a self-protection.

Due to personal safety concern, I would bypass internal officers, and report the issues to regulators such as ASIC. 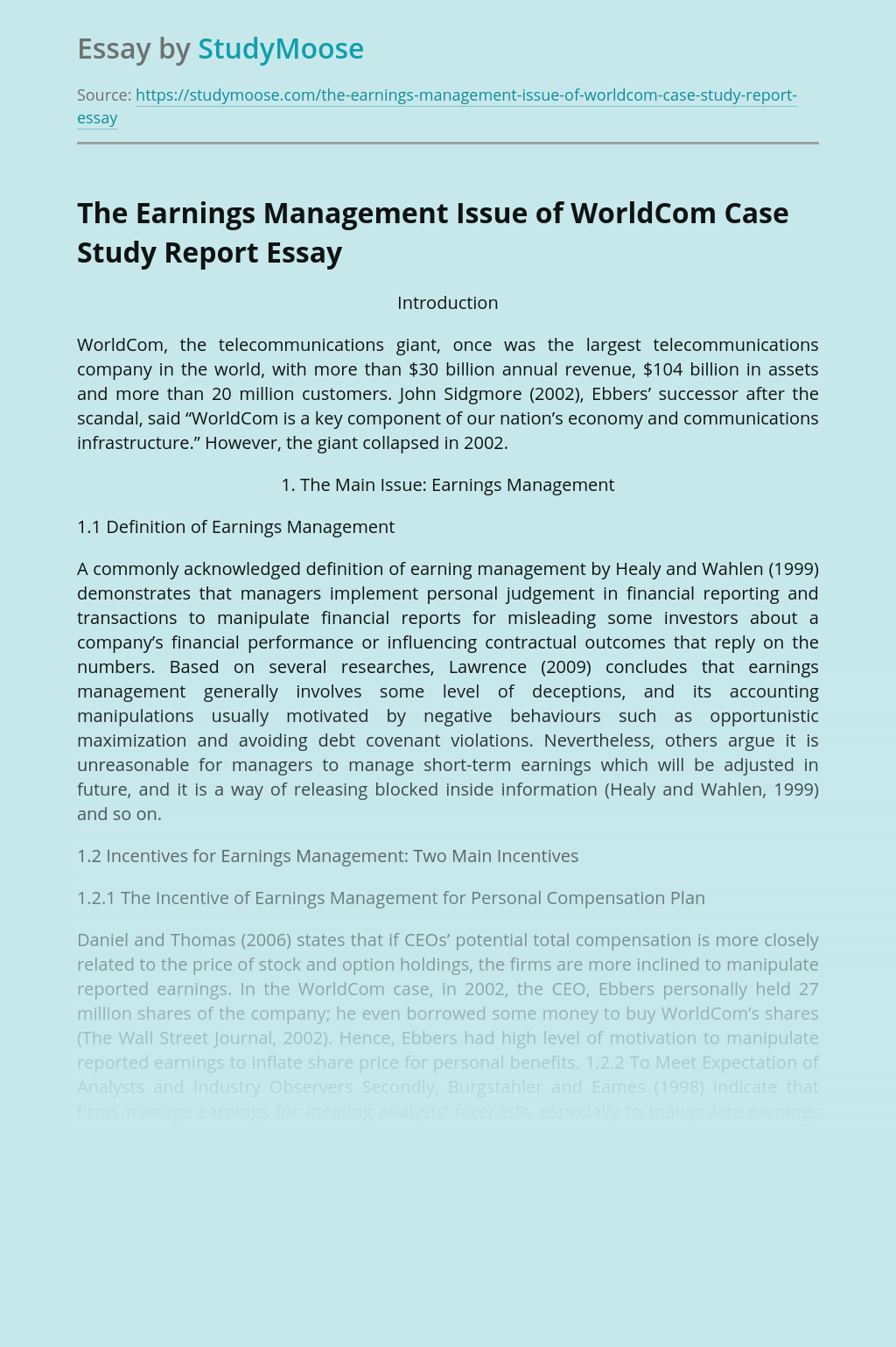 Turn in your highest-quality paper
Get a qualified writer to help you with
“ The Earnings Management Issue of WorldCom Case Study Report ”
Get high-quality paper
Helping students since 2015
Stay Safe, Stay Original