Making a modest beginning in the hinterland of Mississippi in 1983 with a meager capital of less than 100,000 USD it reached the pinnacle of corporate success reporting more than USD 39 billion in revenue and USD 150 million in MCAP (The WorldCom Accounting Scandal, 2002). In the process it became 42nd in the Fortune 500 list.

Under the leadership of CEO Bernie Ebbers it grew rapidly by means of acquisitions and increased demand for telecom services farther fuelled the growth of WorldCom during the whole of 90s.

Don't use plagiarized sources. Get your custom essay on
“ David Myers, Worldcom ”
Get custom paper
NEW! smart matching with writer

WorldCom scandal was one of the biggest accounting scandals of American corporate history. WorldCom was a U.S based telecommunication company. The WorldCom accounting scandal was disclosed in 2002. The Company had resorted to fraudulent accounting practices for five quarters (four quarters of 2001 and the first quarter of 2002) (The WorldCom Accounting Scandal, 2002). The well-known telecommunication company WorldCom and the accounting, auditing and consultancy enterprise were involved in this big accounting fraud. The corporate scandal of WorldCom ultimately headed the company towards the disgrace that ensued in the biggest bankruptcy in American history.

After this act the company terminated the service of the top executive including Scott Sullivan, the Chief Financial Officer and David Myers, the Senior Vice President and Controller. Myers knew that the accounting entries were made without supporting documentation, were not in conformity with GAAP, were not disclosed to the investing public, and were designed to allow WorldCom to appear to meet Wall Street analysts’ quarterly earnings estimates.

The WorldCom Company is directed by their directors, CFO and the auditors. If a leader is indulged in ethical practice its follower also follows that kind of management and leadership qualities. The WorldCom auditor was indulged in the misrepresentation of the accounts of the company and due to his this kind of conduct his followers also got indulged in wrong act. How it could have been avoided?

We conclude that the debacle in WorldCom could have been avoided by a more independent and watchful board of directors, which should have sent a signal to the company management that somebody, is watching them closely and they better mend their ways and means. The concept of board of directors is age old and when it functions properly it is effective.

In this case the independent directors failed in their responsibilities. In almost all corporate fraud it has been seen that the board has been ineffective over a long period of time and aggressive managers use this opportunity to take the rein completely in their own hand. We also conclude that Arther Anderson miserably failed in its duty as external auditor. We hold a puppet board and a malleable auditor as responsible in allowing Ebbers and his associates to perpetrate the accounting fraud. Both the board of directors and external auditors has roles in averting operational risk and they have failed in their responsibilities (McShane, Glinow, & Sharma, 2006). The Sarbanes-Oxley Act

Due to organization such as WorldCom Congress rushed to pass the complicated Sarbanes-Oxley Act. CEOs and CFOs of public companies are required to personally certify the accuracy of various financial reports, with significant criminal penalties for false certifications (up to 10 years in prison for “knowing” violations; up to 20 years if “willful”) (WorldCom scandal, nod.). While the penalties sound significant, the government’s difficulty in enforcing this provision will likely come in proving that a corporate officer’s inaccurate certification was done at least “knowingly,” as opposed to negligently or even recklessly. However, in short this law made many disclosures and certifications on the part of the firm mandatory. It also made the commitment of the external auditor binding.

This is significant in view of the fact that when WorldCom fraud came to light, Arthur Anderson simply issued a statement saying the last two year’s accounting statement are no longer reliable without owning much responsibility. What is noteworthy is the fact that US authority introduced the risk management step in the form of Sarbanes Oxley legislation, making the BOD, the company management and the external auditor responsible and bound by law. In addition, if a public company makes a required accounting restatement due to misconduct, that company’s CEO and CFO can be forced to forfeit any bonuses or profits gained from selling company stock for a one-year period.

But the lack of definitions for the terms required and misconduct, other potential loopholes, and the SEC’s power to grant exemptions could combine to dilute the strength of this provision. The new law makes it somewhat easier for the government to prohibit officers and directors who have committed securities law violations from ever again serving in those positions. However, that potential sanction was at least theoretically available even before passage of Sarbanes-Oxley. Conclusion

A leader is a person that directs a company and its management and if he adopts wrong practices to achieve personal goals, the management may get distract and go in the unethical direction. Management of WorldCom was not evaluating the efforts of its executives, CFO and auditors that is a conduct as every business demands continuous evaluation. Another major contributing factor in the direction of company’s failure was its organization structure that was not managed and apportioned appropriately by its top management.

The organization structure of the World Com was also not appropriate. In WorldCom, there was the lack span of control, means the audit department was not report to the company’s upper level management and not provides the right information about the accounts status of the company (Mcshane, Von Glinow & Sharma, 2006). 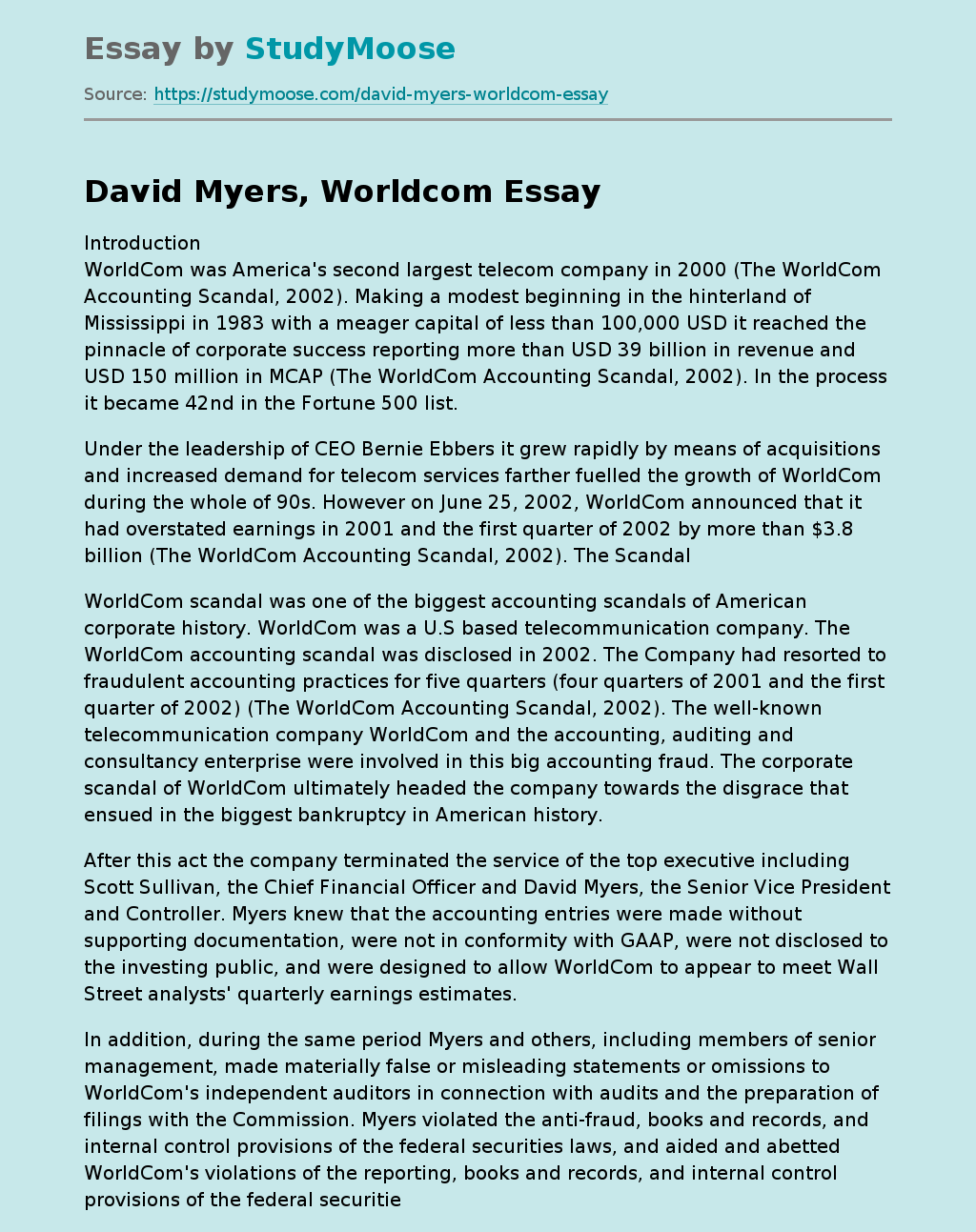