The origin of gender equality came from gender inequality. If in our society there was no discrimination between male and female, we don’t need to any struggle for gender equality. Because, of this gender problem people are being deprived of their basic needs .Occasionally it is seen not only among the poor society but also the rich society. Due to the discrimination most of the country is far from their economic development. Sometimes women are able to work in outside or any corporate sector but just because of gender inequality she can not goes outside to work out and this type of discrimination makes countries economy weaken.

Don't use plagiarized sources. Get your custom essay on
“ Gender Equality and Gender Inequality ”
Get custom paper
NEW! smart matching with writer

The movement towards away gender equality began with the suffrage movement of western culture in the late 19th century.19th century this period was witnessed of significantly changes to women rights; particularly relation to the marital status. In the past years after marriage women are deprived their all rights by their paternal sides. In the colonial period women are only worked on homes, they also indirectly helped their husband in economic sectors, but they can’t do it directly. Different cultural program only males were participated. After the gender equality movement women are participating economic sectors, and they are now concerning their own rights. In the1960s,United nations adopted a rule” Convention on the Elimination of All form into Discrimination Against Women”. This international gender law’s changes the women position in society and country’s day by day. In the 1962, the UN general Assembly added women development role after that Boserup’s published “Women’s Role in Economic development” was published in the 1970s.In the past development rules shows that there is a financial relationship with gender that’s why they concerned women’s role in economic development. All gender equality development rules worked on increasing economic growth because gender equality is structure of economy. In 1970 s and 1980s WID and GAD also became tried for making gender equality. The United Nations and other international agencies have adopted several conventions which promote gender equality. UNDP, CEDAW, ICPD (International Conference On Population and Development),worked for gender equality. There are many articles were also written for gender equality.

Objective: Gender equality isn’t a secret campaign that’s anti-men, nor is it a zero-sum gains. It’s a chance to maximize the potential for each one of us to boost the economy and create societies where we are all seen as people regardless of our gender. It’s a chance of us all to progress. And a chance we should take, with both hands. The main reason I believes gender equality is beneficial to society as a whole is the economic gains they can be made as a result of the emancipation and empowerment of women

Past and present contribution of gender in economy?

Gender equality is a fundamental development objective, and is essential to enabling women and men to participate equally in society and in the economy. In the developing countries it has changed rapidly like Bangladesh, Africa, and India. In the past third world countries women are illiterate, unknown about technology, they couldn’t not outside that’s why at that time economic growth was bad. Now many countries announced girl’s primary level education is mandatory for all and also free in secondary level. For educational changes women are more interested in working sectors. In the garment and factories there have huge women employees they made countries economic structure strong.

What are the improving ways of gender equality?

Gender Discrimination can not be removed completely. Feminist are many organizations are trying so much making equality in society. But there have many ways for improving gender equality. According to many researches the ten most effective ways are really helpful for making gender equality

Why Gender Equality is Structure of Economy?

There is an increasing understanding that gender equality is an essential precursor for promoting economic development. A lack of gender equality between women and men, implies that human resources are not being harnessed to their greatest extent for the development of the economy .In our society men have less problems than girls in economic sector or any working sectors. Women are exploited in inside and outside that’s why they can not much interest for working outside. According to Bangladesh population there are one third populations are female if they can’t participated in work sector our economy can’t stand up. Equal participation is very important for economic development, that’s why we called gender equality is structure of economy.

Methodology: According to this topic I set out a research plan. I tried to follow a simple research methodology. The research is extensively based on primary and secondary data. For my primary research, I asked many questions some men and women about gender equality and relation gender equality and Economy. I also added their opinion and thoughts. On the other hand, for my secondary research, I took help from different types of articles from the internet. I used to standard search engines such as a Google, Yahoo, BBC etc and also large reference site and news site

Based on this topic I was collected some primary data result and that was some voice record of male and female person. According to my primary data there are 95percent people are agreed with this topic. They believe actually gender equality is structure of economy.

Struggle of gender equality is one kind of historical movement. It was started from before 200 years ago. Many governmental and non-governmental organizations worked hard for establishing gender equality because of stable economic condition. In our society people are knowing that gender equality is structure of economy, but they can’t accept it and they also think women been less reproductive than man. For their thinking and sake of Strong economy governmental and non-governmental organization and NGO’s are focus on women development. At first, they divided women in many categories and worked their development. Western countries women’s are stronger than third world women. Third world women needed to be continually challenged. At first in the 1960s an organization (WID) women in development worked for women, and they tried to develop women positioned in our society. Women are always affected positively or negatively by economic policies. According to (WID) Women In Development is synonymous of economic development or economic progress. After the WID in the 1970s started WAD (Women and development program).One good thing of WAD create women empowerment rule.

According to many feminist WID and WAD is one kind of biasness because they only focus women but gender equality is not only women but also men. There is some lack in WID and WAD structure, and they failed after that in1980s GAD (Gender and Development) started their journey with ways. They focused on social structure because society is root of all things. GAD is more successful than WID and WAD. Day by day people’s psychological thinking has changed for women. Now women receive more respect than ever before. During the past era there are only unmarried women are able for work in four places now it has changed. Now, they can work in government and non-governmental organization and it’s has changed only for gender equality developing. Now they work in outside of country and it’s very effective for earning foreign money. In Bangladesh there have been also women quotas in government job sectors. 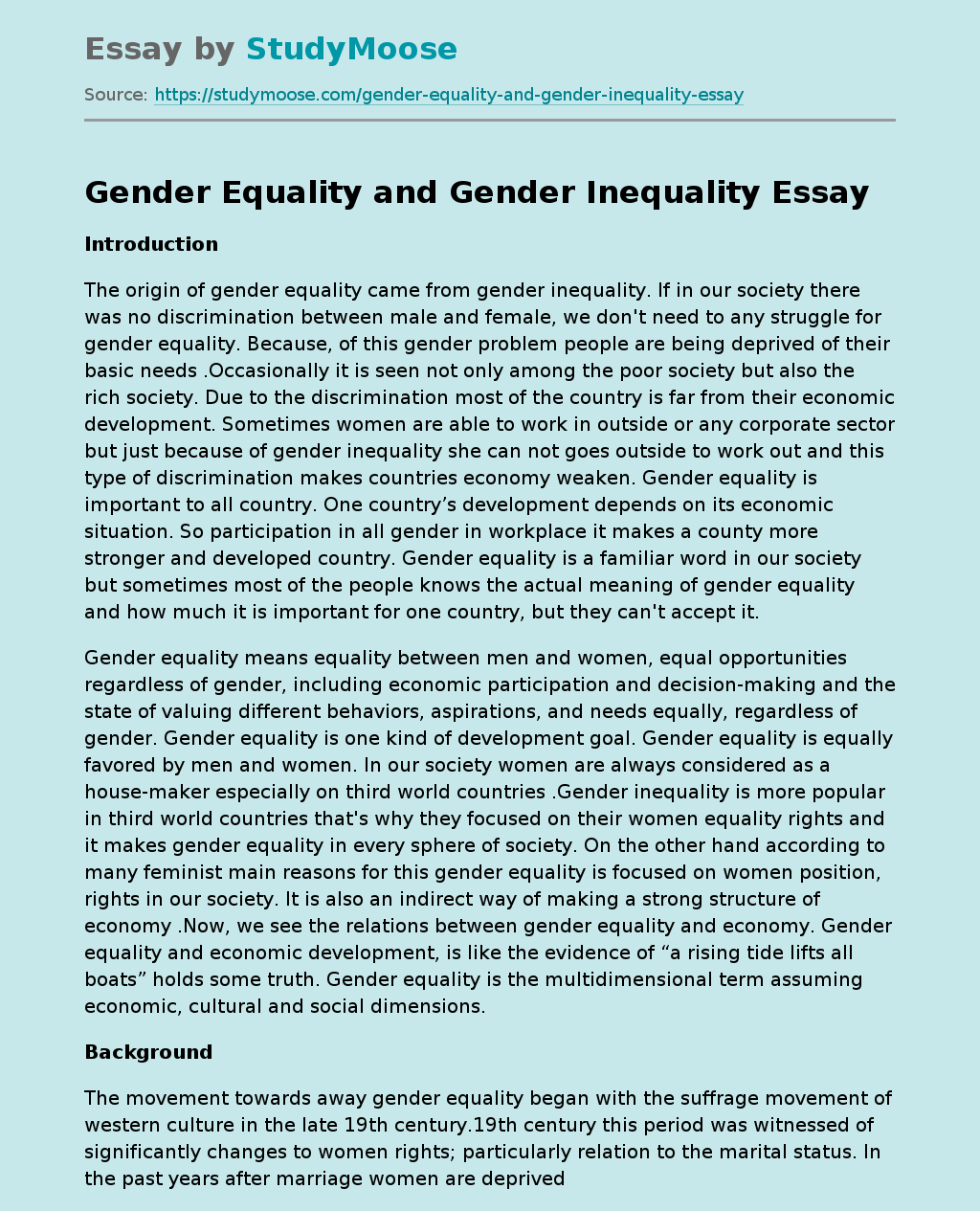