Social inequality is a necessary evil of capitalist society

Don't use plagiarized sources. Get your custom essay on
“ Social inequality is a necessary evil of capitalist society ”
Get custom paper
NEW! smart matching with writer

According to Hradil, he defined social inequality as to fulfill the general accepted of life goal faced in unequal opportunities, it generally refers to the uneven distribution of material wealth in a society.

Because of the general accepted of life goal, which desires of people, not only one, therefore the structure of social inequality is very complicated.

To analyze this complicated structure of social inequality, Hradil suggested first is to find out what is the dimension of unequal living condition with the similar aspect of different life goal, take “rich” as an example of life goal, but in fact this is equal to “money”, money is the unfair dimension of chasing richness.

Capitalism means a system of economic enterprise based on the market exchange. “Capital” refers to any assets, which are money, property, machines, which can be used to produce commodities for sale or invested in a market with the hope of achieving a profit. Nearly all industrial societies today are capitalist in orientation, which refer to their economic systems are based on free enterprise and on economic competition. In past few decades, Hong Kong has experienced a change in its economic structure. Tertiary production contributes to the most development of the economy.

This leads to the social stratification and social class. Social Stratification means in human society, different society member or group differ from having different society resources, and slowly formed higher or lower level or class. Like gender inequality (giddens), it is a significant form of gender inequality, as gender is a critical factor in structuring the types of opportunities and life chances faced by individuals and groups, and strongly influences the roles they play within social institutions from the household to the state.

Men’s roles are generally more highly valued and rewarded than women’s roles. In functionalist approaches, social stratification is necessary to a certain extent, it ensures some important positions bear by proper people. Important or not depends on the needs of whole survival of the society. Hong Kong, as a knowledge-based society, mostly likely adopted Max Weber’s theory(G). Max Weber suggest that stratification can be investigated from three perspectives, class, status and power. Weberian’s class differs from Marxian’s.

The latter one emphasizes production as class can have a clearer classification according to the relationship of production; while Weberian’s class theory focus more on the different dimensions of economics, it emphasizes the relationship of individual and market. Classes are classified by its market positions, and the market positions are mainly based on property owned and skills owned. Different types of classes base on different types of market, including capital market, labour market and commodity market.

According to different considerations, Weber’s class can be arranged continuum from low to high, and what Weber has mentioned about class are propertied upper class, white collar workers, petty bourgeois and unskilled manual workers. In capitalist society, we always judge people’s social status by their comsumption and lifestyle, like apparel, places that they visited always, level of education, size of their house, etc. Social status means social reputation. It is not hard for us to find some advertisements and soap opera full of beautiful women, golf or private club house.

These materials and things force and lead us to chase a higher social status. Status and class are both the main concept in social stratification, but the systems are relatively independent and different. Normally, intellectuals in Hong Kong will have a higher social status, people with higher social class and status will have more power-in-hand, the potential of earning money will be higher than disadvantaged group. Although this is not a good thing but it is a necessary evil in order to balance the society. Conflict theory is another sociology perspective.

Conflict theory is the famous work by Karl Marx and he is the father of conflict theory. Conflict theory focuses on “benefits”, which is the point to be aimed at the overall perspectives of functionalism. Scholars who support conflict theory suggest that relationships of human have to allocate and exploit because of “benefits”. Those elites in the society will oppress the weak people in order to protect and keep their own benefits. They also thought that when compete rare resources, some organizations always try to get more wealth than others.

Power and reputation are enough to allocate the social order. When every organization is trying to gain more benefits, compete and conflict are inevitable. These conflicts are not certainly referred to violent, it includes many forms, like arguing, demonstration, ridicule, or even war and revolution. He emphasizes the importance of conflicts between classes in capitalist countries. He also notices other conflicts in modern societies, examples are conflicts between races and nation, men and women, youngsters and elderlies, religions, international.

Conflicts are the common fact in the society. So, Marxists refuses the hypothesis that social is moving on balance and stable reckoned by functionalists. In the view of conflict theory, conflicts are easily formed between individuals and groups. As capitalism advocate people and enterprises to privatize their own assets and capital, and the government cannot control the capital market, unlike the socialism, therefore the rich businessman and enterprises can become richer, which is the upper class. Middle class and lower class may unhappy with the upper class of having such

a large amount of wealth, while they are not benefited by capitalism, so the conflicts are becoming more and more obvious. Social inequality is easily be seen. The serious wealth gap between rich and poor in Hong Kong has been a long-lasting problem for many years. Actually, income inequality exists in Hong Kong for many years. To prove it, the Gini coefficient can be the method to show how serious the situation is. Gini coefficient is a measure of statistical dispersion developed by the Italian statistician and sociologist Corrado Gini and published in his 1912 paper “Variability and Mutability”.

The Gini coefficient measures income inequality. It is a ratio between 0 and 1 where 0 means perfect equality which is all people having the same income and 1 means perfect inequality which is one person has all the income. Wealth gap in Hong Kong is being worse, the latest statistics show the Gini index of Hong Kong is 0. 537, which is the highest in recent 40 years, and it steps forward to the possibility of social unrest, which is 0. 6 nearer. Actually it is not hard to find out the trends of wealth uneven is getting worse from the income of the working class.

According to the report “2011 Population Census of Household Income Distribution in Hong Kong”, Territory-wide minimum income of the total income of all households in Hong Kong households account for only 0. 6%, A difference of 67. 3 times with the most affluent class, rapidly increases when compare with the 50. 8 times. Statistics also shown the 20% of the highest income earned almost the total income of 60%. It is unbelievable that the inflation rate of Hong Kong in the past decade reach 12%, yet the income of low salary class decreases.

Hong Kong’s high Gini coefficient relates to the relatively low level of government intervention to redistribute income. Taxation makes the Hong Kong system does little to lower inequality. Property tax and stamp duty are mainly paid by the better-off, but betting levy is believed to fall more on the lower income groups. The rich pay little tax and the ‘wealth condensation’ effect is particularly marked in Hong Kong – the rich can easily get richer. Another theory is symbolic interactionism. It is a theoretical approach in sociology developed by G.

H. Mead, which puts strong emphasis on the role of symbols and language as core elements of all human interaction. But is it possible for human to interact with others and then they can get what they want? Can poor people interact with the others and the society that they do not want to be poor and then they can get what they really want? Answer is no. When we are chasing the social equality, we might not get the result that expected before. In other words, social inequality is needed and it is an necessary evil of Capitalist society.

To conclude, those sociology perspectives can explain and to support the reasons for why social inequality is a necessary evil of capitalist society. Social status, social class and power are three main elements in social stratification. Social stratification is essential in order to classify who is the most suitable person to do one thing, it can also ensure the division of work will not be failed. Income inequality and wealth gap are some of the factors that lead to the existence of social inequality. Not all people are generous enough to share the capital that they earned by their own hands, so social inequality is needed.

Although I think social inequality is necessary in a capitalist society, some of the social problems are still need to ease first. Narrowing the wealth gap is one of the problem that government should be done for ages, unfortunately, the government not only did not improve the problem but even getting worse in these few years. Gini ratio is an alert for the government to face up to the problem. We all should adapt the existence of social inequality and try to accept it. Reference List Anthony Giddens, (2009). Sociology, 6th ed. , London,Polity Hon-Kwong Lui, (1997). Income inequality and economic development.

Social inequality is a necessary evil of capitalist society. (2016, Jul 23). Retrieved from https://studymoose.com/social-inequality-is-a-necessary-evil-of-capitalist-society-essay 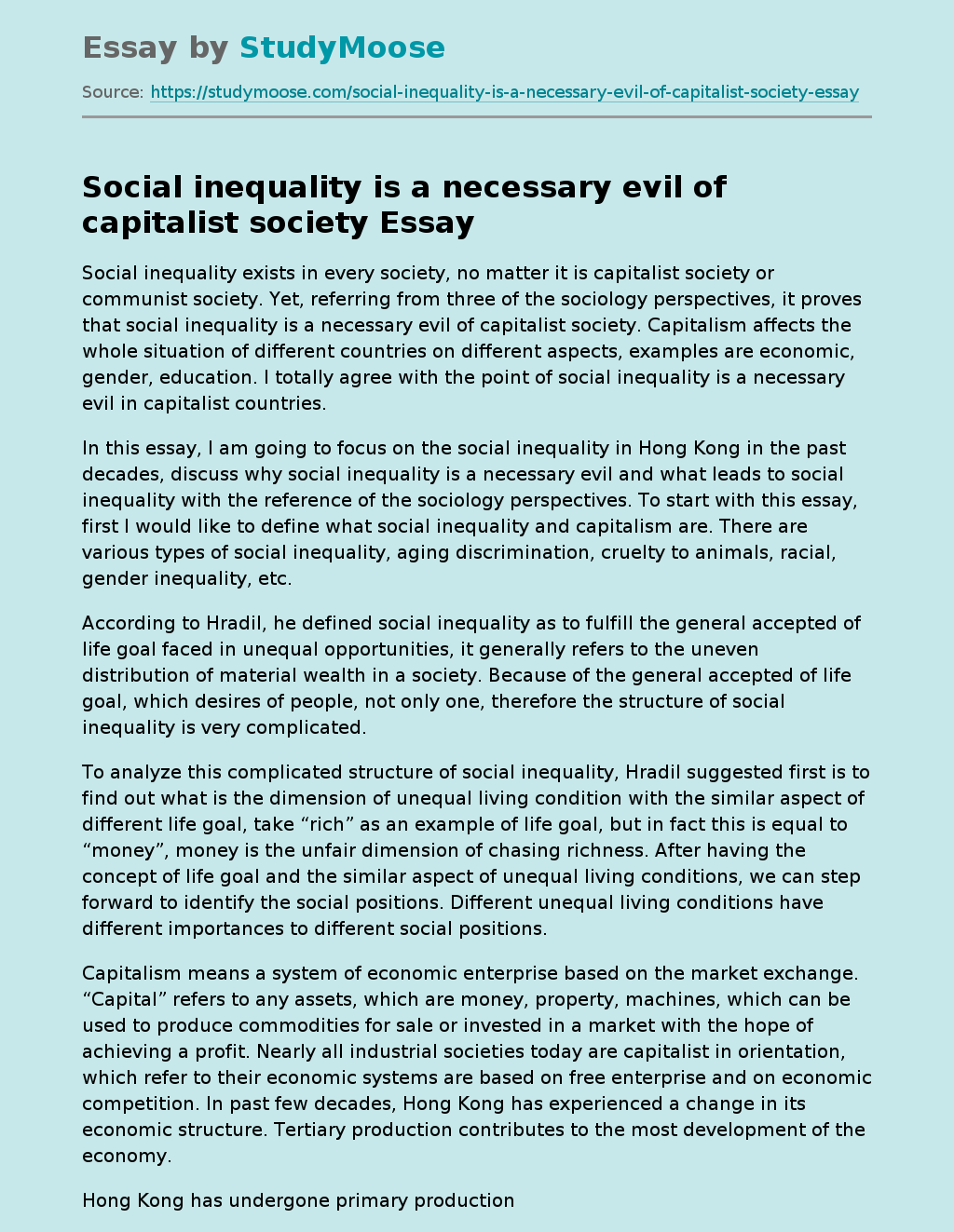