Why Labor Unions Are No Longer Necessary?

Running Head: Why Labor Unions Are No Longer Necessary

Labor unions in U.S.A are legally identified as representatives of workers in specific industries. The current duties of these unions surround collective bargaining, focusing on working conditions, benefits and membership status. These organizations are also responsible for representing their respective disputing members over violations concerning contract provisions. Today, there prevail controversial opinions regarding the importance of these unions.

Don't use plagiarized sources. Get your custom essay on
“ Why Labor Unions Are No Longer Necessary? ”
Get custom paper
NEW! smart matching with writer

A large portion of rational thinkers argue that labor unions are unnecessary in America.

The main reasons behind insignificance of labor unions are harm to ununionized labor, unemployment, corruption, questions regarding efficiency and activeness of these unions, cost- push inflation, social disruption and other social and economic arguments. Some thinkers argued that unionization fabricates higher wages at the expense rate of lesser jobs; if some industries are ununionized whilst others are unionized, wages would decline in ununionized industries. Rise of wage rates, price of labors above the equilibrium price would result in unemployment.

It is due to the reason that it would be no longer worthwhile for industries to employ such laborers whose work is relatively less worth than the minimum rate of wage set by unions.

Political views are also concerned with the fact that trade unions are often partial with inside workers, i.e. those having high productivity and secure job at the expense of outside workers, shareholders of the unionized industry and consumers of the services or goods produced.

The ones who are to suffer most due to presence of trade unions are unemployed people or people at risk of unemployment or people who are unable to grab a job in their desired field.

Moreover, where union shops or closed shops are present, unions can act like monopolies, where a labor might not be allowed to choose not to be a part of and a particular company is not allowed to employ ununionized workers. It may lead in similar troubles confronted by any other monopoly. Even, by introducing charges higher than the equilibrium rate, trade unions promote deadweight loss.

One of the major insignificances of the existence of labor unions is harm to ununionized workers and industries. Advocates of labor unions often declare that higher wages charged by labor unions can be paid to workers via company profits. However, as pointed by several economists, profits of companies are quite rarely that much sufficient. About eighty percent of national income is expensed as wages and only six percent is the remaining profit after tax payment, thus offering very less room for increase in wages. A portion of the company’s profit may also be invested for increase in capital amount that in turn raises the value of increasing wages or labor. If profits were to be completely expensed, this scope of wage increase would also be diminished.

Several influential economists argue that effects of union activities in order to influence expenses are potentially quite harmful, thus initiating an ineffective marketing system. Moreover, labor unions divide the labor pool in methods representing the state of technology at the time of formation of labor unions and the organization lacks potential to change.

Another negative issue associated with presence of labor union is that by causing increase of wages above the market rate, unions also enhance the cost to businesses, thus leading them to increase their prices, contributing to a generalized increase in price of commodities or services. Some labor unions have also been associated with organized crime. Political involvement of labor unions also leads to specific choice and appointment of members under political influence rather than detecting actual capability. Labor unions also initiate strike actions, which lead to disturbance of public services.

Certain attempts and activities to diminish the effects of labor unions include some union busting activities by several companies or government or state action and decision itself. Several democratic governments have made an attempt to confine the activities and effects of labor unions. Market anarchists have issued an argument where they state that intervention of the government in the economy has been largely anti-union in nature, especially in American economy. However, there’s a counter-argument that states that the most effective union actions are either displaced or criminalized by state policies in several countries.

Reportedly, public approval for labor unions climbed high during the 1980s such as it did in other industrialized nations. However, the response declined to almost fifty percent for the first time in the year of 2009. This drop and disapproval against labor unions were seen during the Great Recession period. However, it still remains unclear that if this remarkable drop in public support for trade unions was the result of a long-term trend functionality or a state of high unemployment rate that historically correlates with diminished public approval for labor unions.

However, a strict explanation of the loss of public support for labor union is usually the lack of labor union power, activeness or critical mass. A sizable percentage of American workers are not associated with trade unions in the recent years. These labor unions do not bear the threat- effect any longer. The threat effect is referred to the power of labor unions to raise wages of ununionized shops in lieu of the threat of unions to organize the respective shops.

Trade unionism is also quite criticized by those of left communist or council communist tendencies. Under this context, trade unionism is observed as being more useful to capitalists than to workers. Several early social democrats were also quite skeptic about the effects of trade unions. The usual criticism prevalent among social democrats was that trade unions split workers into several sections rather than aiding in organizing them as a particular class. It was also pointed out they were dominated by comparatively privileged skilled workers who are majorly concerned in order to defend their sectional interests. It was also pointed out that industrial action and organization were not capable of initiating any fundamental social change.

Constant attempts of dragging companies and workers under the influence of a particular independent trade union are often observed. However, this exerts negative effects on the progress of economy. The hiring of workers by a unionized company may be restricted. A unionized company may be influenced to hire workers associated with the same union instead of employing labors based on their skill and capacity. Similarly, a unionized worker may be restricted from shifting from a company if both the worker and the company the labor is involved in are ununionized by the same labor union. The influence of trade unions on its members regarding the latter’s choice of employment is quite controversial and harmful.

Hence, a majority of thinkers opine that the power exercised by trade unions should be kept under check by the government and the power provided to them must be limited and not affected by political influence. The choice of workers and companies in being associated with trade unions must be their individualistic decision and not influenced by the labor union under which they are unionized. The sole focus of trade unions must lay on the betterment and uniformity of country’s economy. For this, governmental concern about the power exercised by trade unions must be raised so that these unions must be prevented from exercising any such power or influence, which is potentially harmful to any worker, company or a threat to the company’s economy. Moreover, many social thinkers are of the opinion that there must be a check on reputation of the union members and their activities to prevent criminal association. Sources

Why Labor Unions Are No Longer Necessary?. (2016, Apr 10). Retrieved from http://studymoose.com/why-labor-unions-are-no-longer-necessary-essay 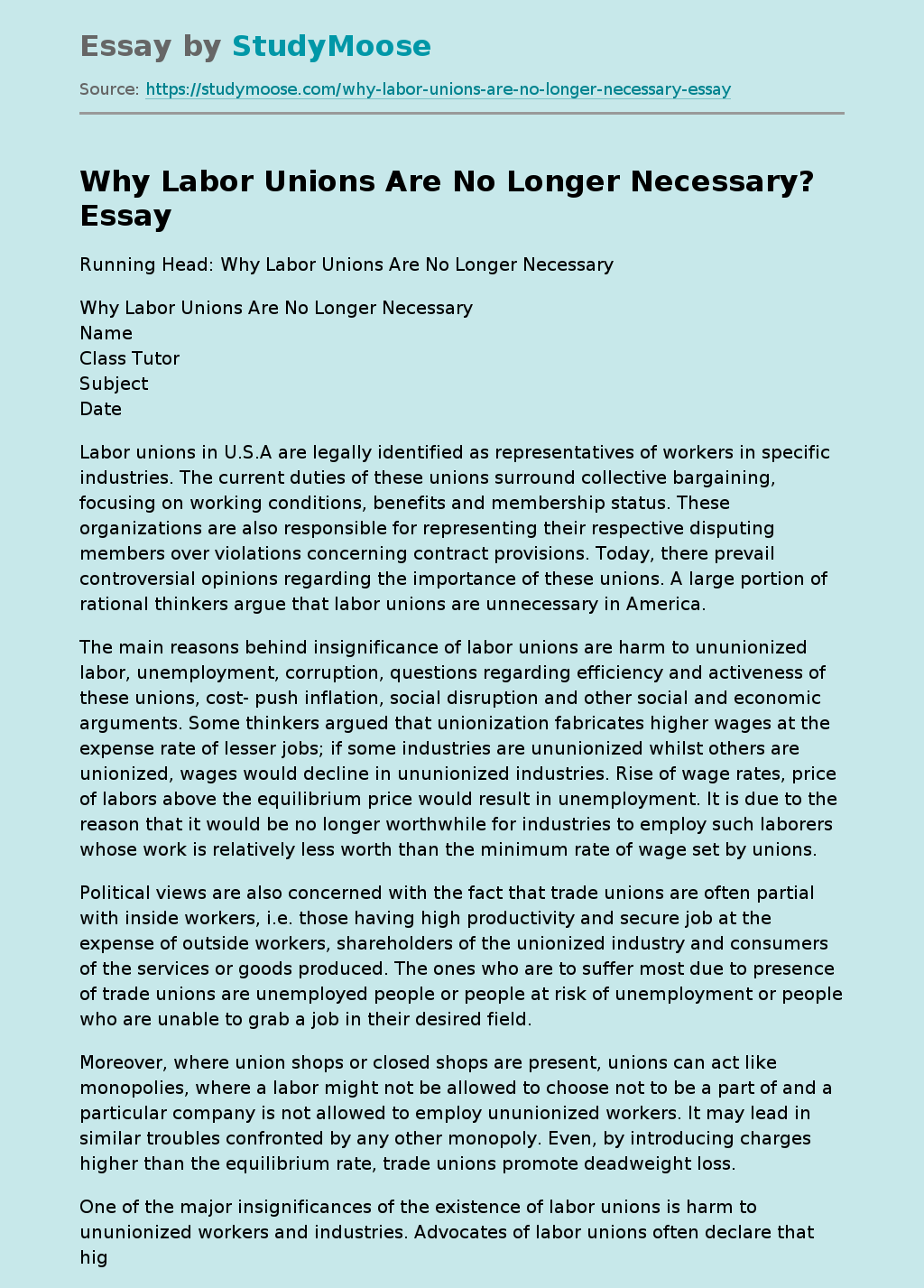