Ever since their initial establishment, there has been much dispute whether labor unions are a positive or negative social economic force in the United States. There are many disadvantages that labor unions pose on the individual, the organization, and society as a whole. This paper discusses the negative effect of having labor Unions in the United States. The union’s top weapons, strikes, can be self-disastrous. The reason being is that “employers of striking workers have the legal right to continue to operate their business with permanent replacement employees who need not be discharged once the strike ends.

Don't use plagiarized sources. Get your custom essay on
“ Disadvantages of Labor Unions ”
Get custom paper
NEW! smart matching with writer

” In this case, employees on strike are not eligible to return since their previous jobs have been occupied.

They would then have to wait until there is eventually an employment vacancy, if any. Striking employees also will destroy people’s every day routines and habits. On December 20, 2005, The Transport Workers Union Local 100 in New York City went on strike. New York City Transit Authority personal had observed the strike.

The 2005 strike, which took place during the busiest shopping week of the year, had significantly affected the local economy since many people had then chosen to avoid shopping in New York. These shoppers chose to shop online, or postpone shopping. The strike was ended on Tuesday, December 27, 2005. The number of strikes and their effectiveness has decreased tremendously. The following figure from Hunter’s report, taken from the U.S Bureau of Labor Statistics, provides us with the evidence:

Walter Williams, professor of economics at George Mason University, emphasizes the above in his article “Where Union Power Lies”.

He gives an example of the failed “air-traffic controllers’ strike during the Reagan administration”. The union in this case was simply not able to prevent the Federal Aviation Administration from employing new workers. Unfortunately, in such instances, unions may tend to violence as a means of eliminating competition. Williams illustrates this during several incidents. Back in 1987, the International Brotherhood of Electrical Workers struck an Anchorage Alaska utility plant. Non-striking workers were routinely attacked and had their tires slashed. One employee had to move after union members threatened to rape and murder his wife.

In his report “Freedom from Union Violence” released by Cato Institute, David Kendrick, program director at the National Institute for Labor Relations Research, affirms that there have been 8,799 incidents of violence reported since 1975, with only 258 convictions. Obviously this first disadvantage of union representation impacts not only the individual, but the organization through acts of vandalism and society by victimizing innocent people. Another disadvantage of union representation is discussed by Hunter as “loss of individuality”. When a union is an exclusive employee representative in a workplace, the employees then become part of a collective bargaining unit where the majority rules.

This majority may not be concerned with the individual needs or demands of each employee. Individual agreements between employees and management are not allowed because each employee has to deal with the union. After all, members of a union become part of a collective bargaining unit in which the majority rules, regardless of any affiliate’s best interests. Union leaders often operate based on their self-interest, which basically means expanding union membership regardless of the members’ benefits; they do so to gain more power and even enjoy some of the extra money. Hunter states “Loss of individuality is of prime concern for many employees, as well as the loss of the opportunity to negotiate for themselves an individual arrangement”. Student assistants at Yale asked to be heard as individuals and not part of a union as they didn’t see union representation as beneficial. Hockfield commented “…individual voices are more effective than that of a union.” “Many faculty members voiced concerns about the implications of unionization, asking questions about strikes, union dues, and the loss of individuality. Loss of individuality is inevitable when labor unions represent a majority.

Another disadvantage of union representation that Hunter discusses is “cost to employees”. Collective bargaining units require all employees to support the union financially as a condition of their employment. “Federal law provides that employees may, regardless of the language in the agreement, opt not to formally join the union; however, they may still be required to pay certain dues and initiation fees.” Every union member is required to financially support the union by paying dues, and can face penalties that amount to his/her discharge for failing to do so.

That is, the union can demand the discharge of any employee who fails to pay required dues and fees, unless a right-to-work law has been enacted in the state where the business operates. The costs of union membership differ but the average Michigan union employee pays hundreds of dollars in dues a year. According to the U.S. Department of Labor, “In 2007, 30 states and the District of Columbia had union membership rates below that of the U.S. average, 12.1 percent, while 20 states had higher rates.” That means that the average cost to union members is above 12.1%.

This union representation can be quite costly to employees and in some cases defeats the purpose of fringe benefits. Other disadvantages of labor unions that Hunter argued is “Penalties by labor unions” employee can be fined or disciplined for involving in activities that violate union code. Such activities include, but are not limited to: crossing strike picket lines, surpassing set production quotas, and seeking representation by other unions. Unfortunately for union workers, these fines are enforced by the law. This is not the case however for nonunion employees who are exempt from all the declared restrictions.

Although Robert Hunter raises excellent points, disadvantages of union representation exceed the individual to adversely affect the society and the economy. With regards to society, Terry Moe, underlines in his article “EDUCATION: Taking on the Unions” that the teachers’ union have interests that are “often in conflict with the public interest”. Moe raises the concern that the union does not permit the riddance or even the evaluation of bad teachers, which apparently is not good for the kids and schools. As for the economy and organizations, Thomas Sowell touches on this issue by explaining that union contracts have helped put American automakers at a disadvantage compared to its Japanese competitors, resulting in General Motors “going from selling about half the cars in the country to selling about one quarter today”. The UAW simply did not exhibit flexibility at a time when change was needed most. The consequences were terrible to the economy and organizations like The Auto industry: numerous plants closing, hundreds of thousands of employees being laid off, the moving of plants to states that have no union control, and the moving of plants overseas.

From all of the above, it is easy to conclude that labor unions are a negative social economic force in the United States. Unions simply forgot their main purpose of existence which is to be fair to all parties: workers, companies, and the society. Instead, unions have become like businesses interested in maximizing membership count regardless of consequences. That is why the unionized share of the total U.S. labor force has declined tremendously since the 1970s till our present day. According to Richard Vedder, distinguished professor of economics at Ohio University, replied in an interview with The Austrian Economics Newsletter by “Americans now realize that we don’t need labor unions” The continuous decline in union membership over the past years serves only to solidify Vedder’s statement. Also, according to Hunter, “the labor movement will have to add nearly 700,000 members per year just to maintain its current levels of employee representation”. 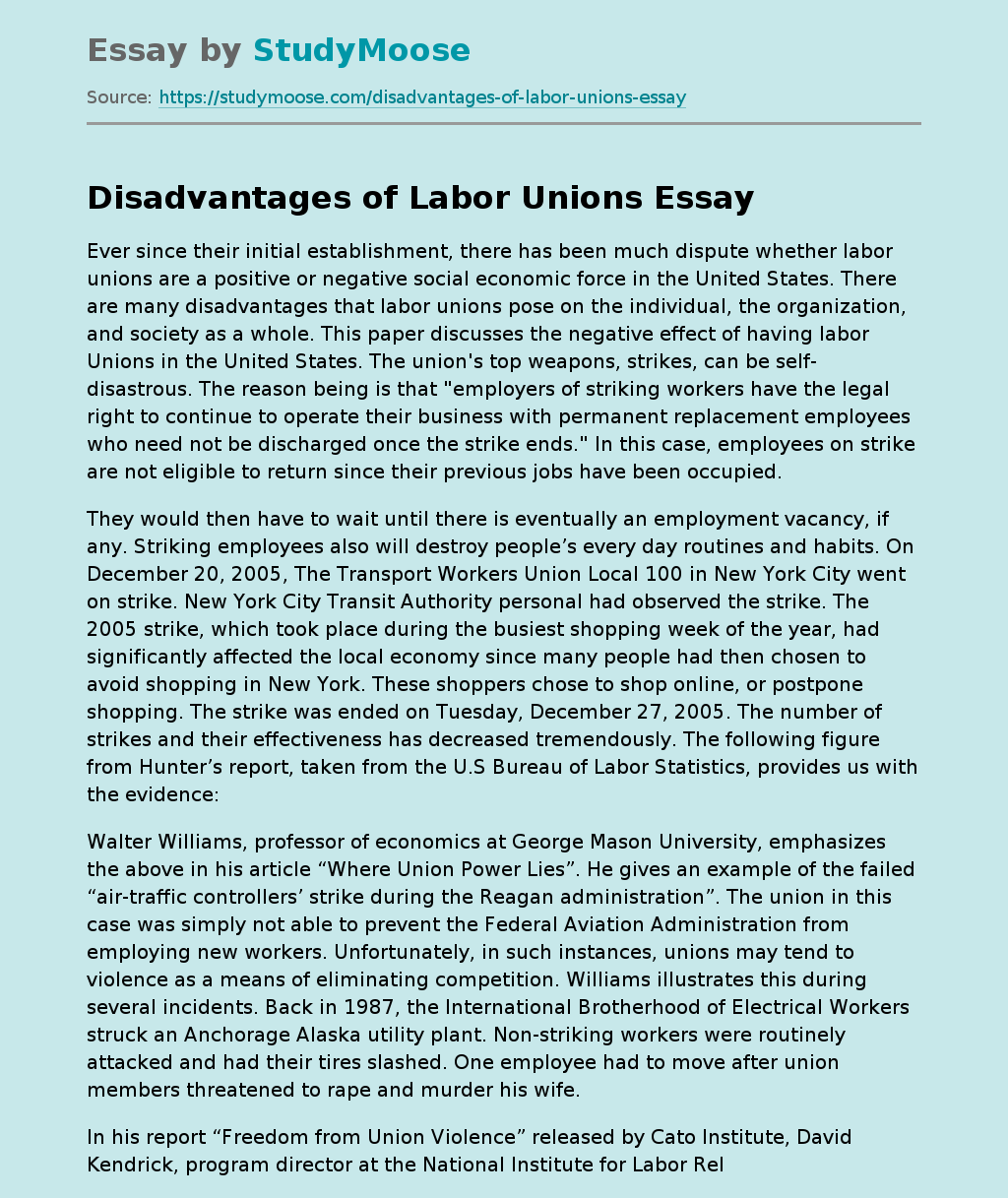