The film ‘Bend it like Beckham’ resonates with me strongly, as the conflict between Western and Indian culture is all too familiar. The main character ‘Jess Bhamra’ personifies this conflict in the most perfect and relatable way. Being a first generation Australian-born girl with Indian heritage, I can personally attest to having to simultaneously maintain two very different cultures that so often clash. ‘Bend it like Beckham’, is a film telling the story of an Indian girl whose only real goal in life, much to her parents’ dismay, is to play professional football.

Don't use plagiarized sources. Get your custom essay on
“ A Critical Examination of Cultural Influences in the Film Bend It Like Beckham ”
Get custom paper
NEW! smart matching with writer

As Jess embarks on her trying journey of self-development in a cross-cultural space, she befriends fellow football enthusiast and player Jules who convinces Jess to join the local women’s football team. This friendship provides an interesting perspective on the Western culture, by offering the responder an insight into the struggles of Jules’ life, some of which are very same struggles present for Jess. The diasporic identities that are Jess’ parents are not ill intentioned, however slightly overbearing in their persistence of Jess’ obligations to her traditionally Sikh family.

Thematic aspects of etic-emic distinction are raised in this film and include the role of women, homosexuality, stereotypes, cross-generational behaviours and integration by relational theory. All such themes are highlighted by the culture clash at play, as Jess attempts to grasp some sense of identity in an over-protected Indian space. Women’s roles in both Western and Indian cultures are thoroughly scrutinized in the film. Jess expresses some discomfort in assuming the traditional role of a Sikh woman as stipulated by her parents.

This is the main source of discontent throughout the film, as her ethnocentric parents truly, and somewhat naively, hold the belief that becoming a lawyer and marrying a man within their community is the key to happiness. As was noted in Article one of Part A, the Asian culture holds loyalty to family-kin relationships and obedience to elders in very high esteem. In this regard, Jess’ Western values of freedom of choice and personal fulfilment take a backseat. This is highlighted in a conversation that occurs with her Western teammates, where hey ask her how she is able to ‘stand’ getting an ‘arranged marriage’ to which she replies, “It’s just culture” with a certain nonchalance. In doing so Jess is demonstrating that she is culture-bound, conditioned to the Indian cultural practiced of ‘arranged marriages’. The ultimate attribution error committed by Jess’ parents is not a result of ill-intentions, rather a protection mechanism against unknown western influences. The role of women in the Western culture is not spared of social commentary in this film.

It is interesting that Chadha, the Indian-born writer, director and producer of the film, chooses to examine the social constructs surrounding the implications of a women’s football team in England. As there is no professional English women’s football league, one can safely assume that football is not an appropriate past time for women. This idea is reaffirmed by Jules’ mother who, throughout the film, holds a very traditional English view on the role of women in society.

She often expresses her disapproval with sentiments such as, “Nobody’s going to go out with a girl who’s bigger muscles than him! ” Jess’ mother subscribes to the Indian tradition of a woman as a homemaker by saying, “What sort of family would want a daughter-in-law who could play football but not cook? ” expressing much the same outlook as Jules’ mother, varied only by the respective women’s contexts. Such generalisations about women’s social placement is also seen in Article four of Part A.

Adams et al. (2010) acknowledges the place of women in Spanish society as home-maker figures by hypothesising women to be more able in polychronic environments. It is also seen that the Western culture as a whole participates in the alienation of the team as a result of unfeminine associations. This is seen when Jess makes the point that ‘Indian’ girls do not play football. Jules pointedly remarks, “It’s not just an ‘Indian’ thing. How many people come out to support us? The girls clearly seek an equality matching relationship with the men’s team. The concept of homosexuality is broached in this film. While the notion is still taboo in Indian culture, Chadha makes a statement by depicting the West to be more informed but equally disapproving.

This is illustrated by the undue paranoia felt by Jules’ mother when she mistakes the friendship between Jules and Jess as something more. When confronted, Jules exclaims, “Mum, just because I wear trackies and play sport does not make me a lesbian! The matter-of-fact feel of this conversation and level of homosexual awareness in the Western culture is contrasted by Jess’ grandmother’s remark, “Why did she call Jess a lesbian? I thought she was a Pisces” Her obvious lack of knowledge in confusing homosexuality and astrological star signs indicate her culture blind nature. As if to reiterate the secretive taboo that is homosexuality in the Indian culture, Chadha scripts Tony, Jess’ childhood male friend, as a homosexual. Jess’ reaction to the news is indicative of a typical first-generation non-resident-Indian, a result of cultural conditioning.

Her shock is portrayed through her exclamation, “But you’re Indian! ” as if to say homosexuality is simply non-existent in the Indian culture. Jess soon recovers and displays an acceptance far greater than that of her own grandmother or Jules’ mother and tells Tony that she is “okay” with him “liking David Beckham”. While Chadha aims to resist and counter some stereotyping, the stereotyping of Indian communities as ‘backward’ and ‘conservative’ is still very prevalent throughout the film.

Jules’ mother innocently typifies the Indian culture in her first encounter with Jess by making statements such as, “I bet your parents are fixing you up with a handsome young doctor soon” and “Jess, I hope you can teach my daughter a bit about your culture, including respect for elders and the like. ” She soon learns of Jess’ involvement in Jules’ football club and meekly states, “I’ve never seen an Indian girl play football before”. Jules’ mother exhibits culture-blind behaviour and has very fixed notions about Indian culture; she exudes disbelief as Jess dispels these essentialising notions.

Chadha further breaks free from the stereotyping of arranged marriages by scripting Jess’ sister, Pinky, as having a ‘love’ marriage. When Jess tells her teammates that her sisters’ marriage was a ‘love match’, the display of acculturation allows for her teammates to learn that the Indian culture is not as backward and conservative as is perceived. It seems that for an Indian family living abroad, the generational gap between parent and child is magnified by the overlay of cross-cultural aspects. Jess and her father share the same penchant for sport and both qualified to participate in quasi-professional teams in England.

When both characters are on the receiving end of racial slurs on the field, they both react true to their cultural upbringing. Jess’ father demonstrates an ‘Eastern’ submission and interdependent self-concept by walking away from the sport and quashing any hopes of returning to the field. Jess, however, displayed a more ‘Western’ dominance and independent self-concept by physically retaliating, costing her a ‘red card’ and a temporary suspension from playing. The Eastern mentality of obedience is also noted by Chang et al (2007) in stating “anti-hierarchical behaviour is not allowed in Taiwanese workplaces”.

The movie culminates in Pinky’s extravagant wedding, very true to Indian culture. As an unfortunate coincidence, the football Grand Finals are held on the same day, rendering Jess unable to attend her football match and compelling her to her sister-of-the-bride duties. Throughout the movie, Chadha depicts Jess’ parents in a harsh, dictatorial light however, her fathers’ wish for her happiness compassionately exceeds his own expectations, “If it’s the only thing that will put a smile on your face one the day of your sister’s wedding, go and play. Jess reluctance to leave suggests that she strongly identifies with family ties and cultural commitments. Urged by Tony, she ultimately leaves the wedding to play the last half of the football match, winning the game and landing an opportunity to play professional football in America. Through Relational Theory her parents understand that to have a meaningful social relationship with their daughter they must actively seek to understand her cultural viewpoint and schema.

This feel-good film is a perfect illustration of Contact Hypothesis whereby Chadha has brought to life some contentious issues of Eastern and Western culture and allowed for a gradual process of cultural integration throughout the film. Concepts such as the gender roles, homosexuality, stereotyping and generation gaps are highlighted so as to demonstrate that multicultural societies should not invoke permanent differences, rather form fluid identities which enable people to accept and internalize all components of culture beneficial to their lives.

A Critical Examination of Cultural Influences in the Film Bend It Like Beckham. (2016, Sep 15). Retrieved from https://studymoose.com/a-critical-examination-of-cultural-influences-in-the-film-bend-it-like-beckham-essay 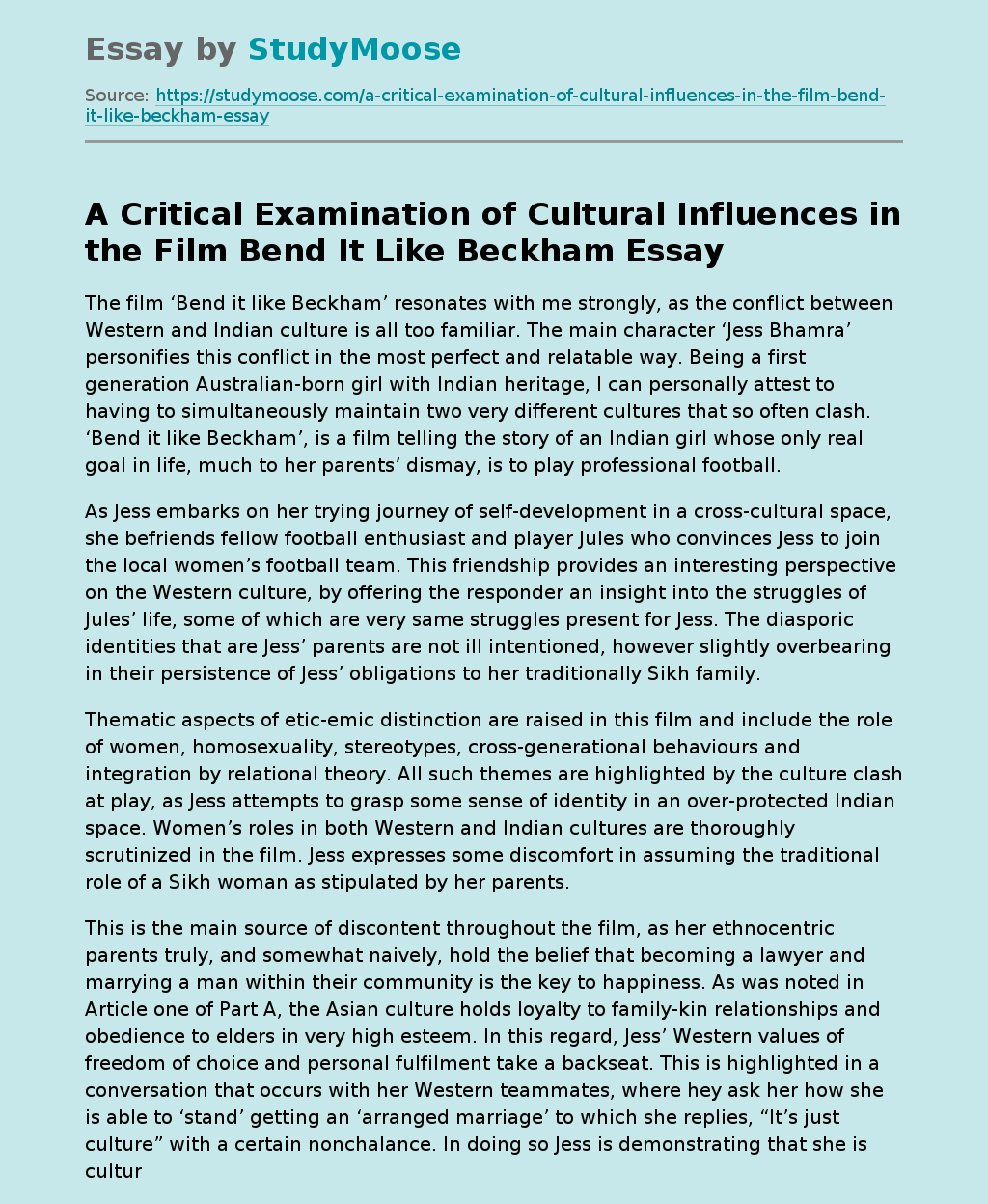