Don't use plagiarized sources. Get your custom essay on
“ The Ecosystem of Big Bend National Park ”
Get custom paper
NEW! smart matching with writer

To include the Hidalgo ladies tresses, which hasn’t been seen in over 60 years! (National Park Services, 2013)

Abiotic Components • The Rio Grande River which supplies the water sources to the park and its biotic components. • The weather, mostly because of wide diversity of the climates, sometimes its frigid, on occasions there are droughts and heavy rain are all very common.

Human Impact on Big Bend • Pollution is by far one of the greatest impacts on the park.

Due to number of industrial plants that have been built near Big Bend, on the Mexico side, the air and water quality are lot poorer than in past years (National Park Services, 2013) . People visiting the park contribute to the pollution problems as well by dumping their trash and/or human waste on the lands and in the river and/or creeks. • Fires caused by humans has destroyed thousands of acres of the park over the last 20 years (National Park Services, 2013) • Hunters and/or poachers killing and trapping exotic animals of the park have their impact as well.

Predicted Human Impact • As the population grows along both sides of the Texas/Mexico border, near Big Bend, the amount of pollution into the park will only increase. These population growths will include many more industrial type plants, more than the 1400 that are already in existence, to further pollute the air and water that flows through Big Bend. • The lack of human compassion for the conservation of the park will also lead to more pollution and fires. • Poachers and other hunters will have an impact on the animal population of the park as more and more rare species may be caught or killed and removed for human pleasure.

Guidelines regarding Human Activities • The General Management Plan for Big Bend Park was revised in 2004 by the U.S. Department of the Interior for park services. This management plan outlined actions to be taken in certain areas of the park to help with water conservation as well as protecting certain endangered species of fish and plants. (National Park Services, 2013) . • Fire danger is always an important safety consideration in Big Bend. Wood or ground fires are not permitted in the park, and you must exercise caution in the use of gas stoves, charcoal grills, and cigarettes. Restrictions may apply to the use of these heat sources during drought conditions (National Park Services, 2013) 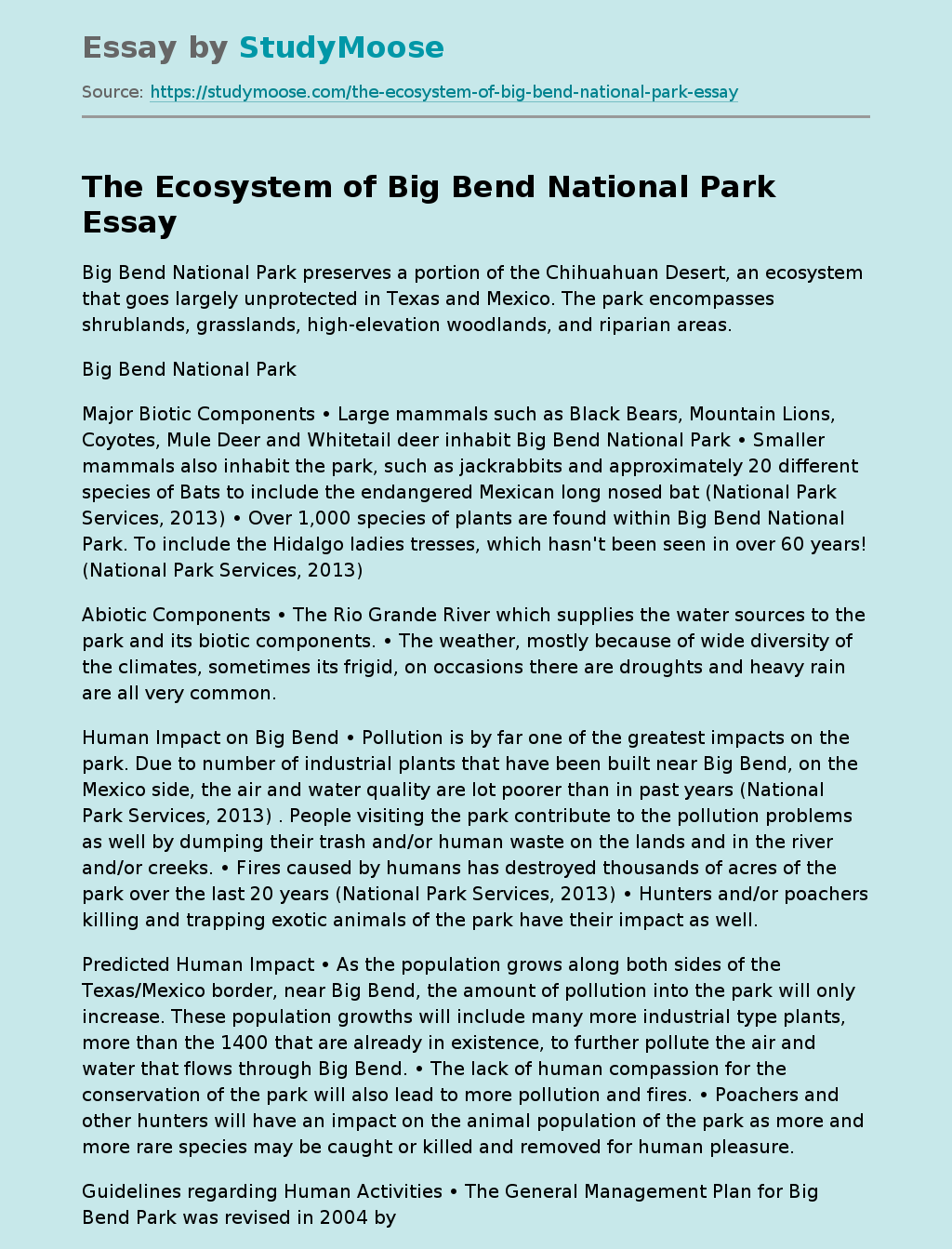