In Gurinder Chadha’s film Bend it like Beckham is a film where some of the characters have to face conflict in their lives. In this film it tells us that everyone can overcome obstacles and follow their dreams, also stepping out of your comfort zone, and doing the things that mean to you the most which include, sneaking out and playing soccer, parents think that Jess and Jules are lesbians. This is shown in the characters Jess Bhamra, Jules Paxton and Joe.

Don't use plagiarized sources. Get your custom essay on
“ Summary on Bend It Like Beckham ”
Get custom paper
NEW! smart matching with writer

Jess, one of the main characters in the film, Jess has to choose between obeying her parents or following her dreams. She chooses her own future by sneaking to do what she wants most and face what she wants to do in life, when Pinky’s wedding is happening and Jess goes out to play soccer. When she gets back and gets into the wedding car with Pinky, and Pinky says to her, ‘’don’t you want to be married? ” and Jess says, ‘’no I want more than that.

’’ Jess wants to follow her own future not someone else’s life they’ve chosen for her.

Also in the film Jules Paxton faced conflict as well. Jules always stood up in what she believed in. She believed In playing football professionally, and when Jess liked the same guy she did. Jess and Jules both liked Joe, their football coach. When Jules saw Jess and Joe about to kiss, she cracked it at Jess, the soon got home and Jules and Jess had been staying away from each other when Jess went to Jules, they were arguing in Jules bedroom when Jules mother could hear them arguing and she thought that they were lesbians.

Mrs.Paxton saw them kissing until they went to Pinkys wedding and Mrs. Paxton saw them, started yelling and on the car ride back Jules explained how they liked the same guy and were best friends! Joe also was one of the main characters and was Jules and Jess’ football coach. Joe had almost the identical problem as Jess. His father wanted him to coach boys soccer, but he wanted to coach the girls soccer.

Throughout this Joe isn’t close with his father anymore, but Joe wants to face his own dream and not his fathers. Joes father didn’t want what Joe wanted. Joe encouraged his layers, and fighted for what he wanted, like when he went to Jess’ house to tell her parents she should be playing, no matter how hard it is at times, he strived for what he wanted in life. Throughout this film, Jess and Jules were facing conflict, and it shows us that anyone can get through it in the end. They fighted there battles and moved on. Jess sneaked out playing football, Jules parents thought she was lesbian and Joe was the girl’s football coach, but his dad didn’t want what he wanted. You can always overcome something, doesn’t matter how long it takes you.

Summary on Bend It Like Beckham. (2018, Oct 24). Retrieved from https://studymoose.com/summary-on-bend-it-like-beckham-essay 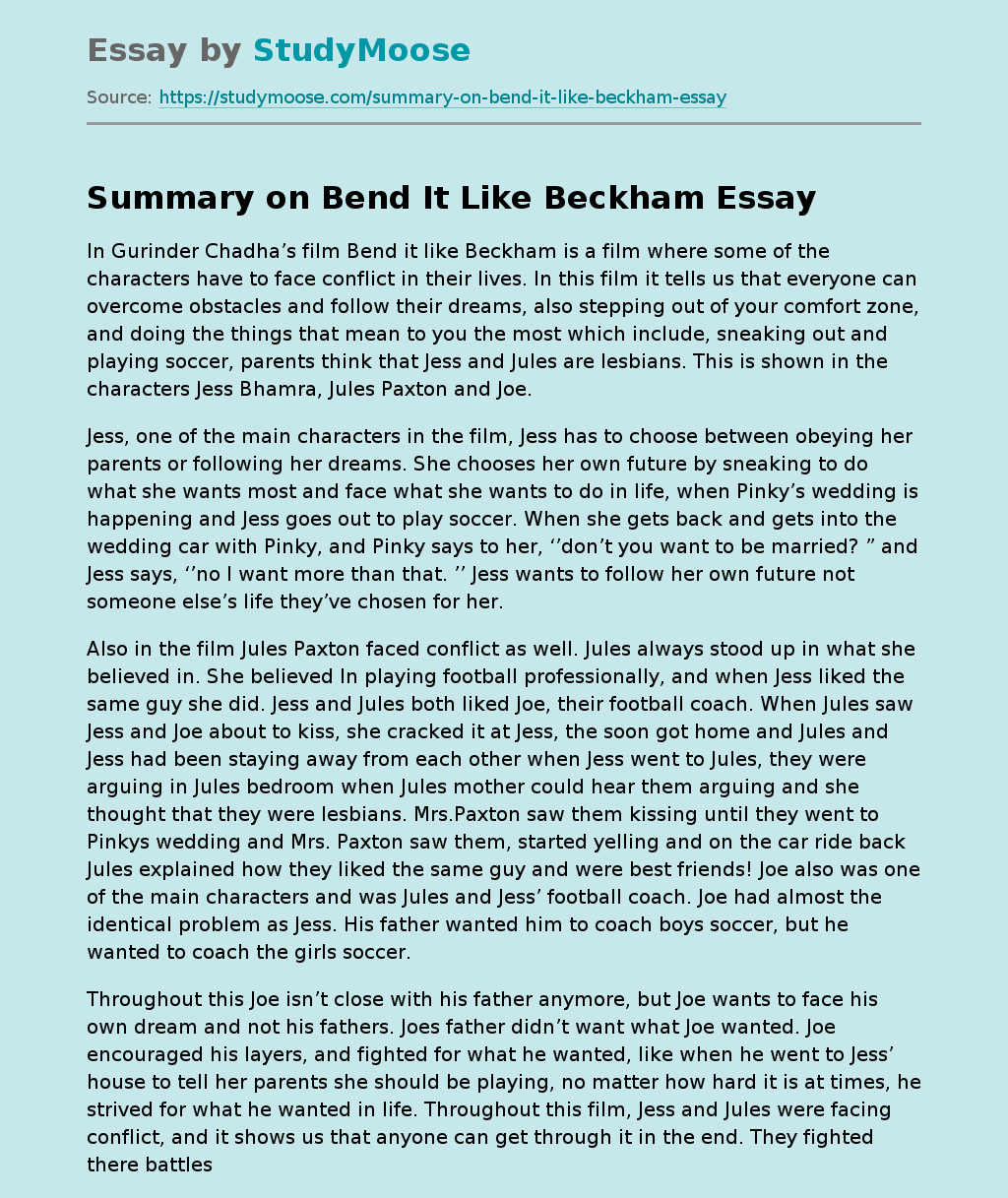