The film Friday Night Lights by director Peter Berg depicts high school football players from Odessa, Texas on their journey to the state championship. Patriarchy is a major theme in this movie and there are several father-son relationships that are depicted in different ways. The “fathers” are not always present, but at times another character takes over and influences the athlete, such as Coach Gary Gaines. The worst relationship depicted by far is between the abusive drunk father Charles Billingsley and his son Don.

Don't use plagiarized sources. Get your custom essay on
“ Breaking Down the Friday Night Lights: Like Father Like Son? ”
Get custom paper
NEW! smart matching with writer

On the other hand, there is the loving coach Gary Gaines that acts as a father figure for Mike Winchell and others. Football players are also often considered “heroes” and this idea is heightened in popular sports films such as Friday Night Lights.

Fathers very often influence how these players accept their roles, and this idea is shown through their actions, as can be seen from the development of Mike Winchell and Don Billingsley’s actions throughout the film.

This theme is best observed in the scene after the second big loss, where Charles yells at Don for his poor play, and Coach Gaines discusses curses with Mike Winchell. While Coach Gaines is depicted as a father figure for the players on the team because of the distancing or absence of their real fathers, he influences them to act honorably at all times and give up their curses, suggesting that success is based on overcoming setbacks rather than attempting to win state. One of the scenes that fit best with the idea of Coach Gaines as a father for the team is after the second big loss when everyone is criticizing Coach and his team.

Whereas Charles Billingsley is continuously harassing his son Don, Coach is shown as an affectionate father figure. The scene clearly focuses on Charles and Don, but the fact that the two relationships are both paired together suggests that this scene is specifically about fatherhood. It also implies that Coach Gaines has taken over as Mike’s father. Immediately after the loss, the movie shifts to Don Billingsley driving his drunken father, Charles, home. The director continuously uses editing to shift from Charles and Don to Mike Winchell and Coach Gary Gaines (who are also driving home together). The radio is playing and the announcers are discussing the loss saying things like, “they all suck.” Charles is chuckling to himself and starts to abusively harass Don. He talks about how his father used to whip him and how it made him sick to his stomach. He compares that feeling to watching Don play. Following this, he kicks out the windows because he needs “fresh air” for him stomach. Next, he takes his ring off and presses it to Don’s face saying, “Can you touch that?” three times, each time getting louder. Finally, he throws his state ring out the broken window and Don turns the car around. The scene then flashes back and forth from Don looking for the ring to Mike and Don discussing curses. Coach Gaines teaches players to move past their curses and not let it affect their behavior in any situation in order to attain success. The way Berg edits the scene and the camera work he uses glorify Coach Gaines as a father, while clearly Charles can be considered as “distant” (to say the least) from Don.

It is for reasons such as these that Coach Gaines feels the need to take over this paternal role, and is most evidently displayed in his treatment of Mike. Mike and Coach have an extremely deep conversation about “curses,” and Coach says: It took me a long time to realize that, uh, there ain’t much difference between winnin’ and losin’, except for how the outside world treats you….Fact of the matter is, I believe that, uh, our only curses are the ones that are self-imposed. (Friday Night Lights). This significant quote presents much to be analyzed, but perhaps the most interesting elements are the “curses…that are self-imposed.” The first possible example of a curse that comes to mind, given that the two opposing relationships are contrasted in the same scene, is an absent or distant father. It could easily be said that Charles is a curse on Don. This is also shown because Charles is in the back seat, while Don is driving, so it could be claimed that Charles is “on Don’s back” and won’t let him go, similar to how any other curse that haunts a person. However, this abusive relationship is not self-imposed on Don because he probably did not want Charles’ drunkenness or abusive treatment. Another example of a curse, or blessing depending on how one views it, is the special treatment that football players get as heroes. They are expected to act in a certain heroic way, yet are given special privileges that are hard to turn down.

So how exactly does this fit with Coach’s idea of self-imposed curses? The self-imposed curses are not the causes of the actions (distancing of fathers or special treatment), but the resulting actions themselves, which cause consequences. For example, at the beginning of the movie, Don and Mike were seen drinking at parties and editing implied that they were having sex with girls. Don’s drinking is very likely influenced by his father. The fornicating with girls is likely due to the fact that football players are seen as heroes and are given special privileges. Both could be considered interferences, and immoral in their own way. In either case, Coach Gaines in his patriarchal role has taught players to get rid of these self-imposed curses. The players let things like their father (or lack of a father, in Mike’s case) get in the way of success. Perhaps Friday Night Lights is not about the journey to the championship, but rather a journey to ridding oneself of curses. Getting rid of these curses can and does lead the team to success (even though they do not end up winning), and it could not be done without the fatherhood of Coach Gaines.

The maturity displayed by the players grows throughout the film and this is primarily brought about by Coach Gaines’ acceptance of the father role and the development of the players into men. Josep A. Armengol-Carrera identifies the trend of a “self-willed orphan” in American Literature due to the distancing or complete absence of a father figure. This applies perfectly to Mike Winchell and Don Billingsley, especially when Carrera states, “While boys thus become dependent on surrogate father-figures for success, it is equally true, as Leverenz skillfully notes, that these are usually not real “boys” being raised by real fathers” (213). Essentially, this is saying that the self-willed orphan-heroes, (Mike and Don) have taken on Coach Gaines as their surrogate father and are dependent on him for success. However, the two players are clearly not boys. Football is considered a man’s sport, yet is still played by high school athletes. This lens raises the issue of whether or not the athletes are men yet. As this scene has shown, they are, due to the influence of the “surrogate father-figure” and maturity displayed. When Charles abused Don and proceeded to throw his state ring out, a “boy” might have just left it there. Don has manned up due to Coach Gaines teaching to him remove self-imposed curses. He decided to stop the car and search for the ring, knowing its importance. This all occurs at the same time that Mike and Coach are having the conversation about curses. Perhaps Don getting the ring is the actual physical removing of the “curse” of his father. Don has clearly matured and this is principally shown when comparing this to the beginning where he was drinking and fornicating. Don may still be doing these things, but he is now making an extra effort in order to get rid of his curses.

The final scene of the movie, in which the team loses the state title game, conflicts with the idea that success is caused by giving up curses and suggests that it is based more about how the players “perform.” Success is no longer measured by winning, but rather how the players act. As Coach Gaines stated in the earlier scene, the only difference between winning and losing is how the outside world treats you. This conflicts with the final scene, where everyone is sad and empathizes with the team. Even the abusive Charles Billingsley warms up to his son, Don, by giving him his state ring after the performance. Previously in losses, spectators treated the players and coach Gaines horribly after a loss. Jarom McDonald analyzes the work of F. Scott Fitzgerald and digs deeper into his fascination with the game and how football players are treated: As Fitzgerald narratively explored the connection between the game of football and some of these settings, such stories describe the physical action of football and its consequences not as an athletic competition but as a staged performance…football players, through their performances, set themselves apart from the spectators, both athletically and, consequently, socially (McDonald 136-137). This lens by Jarom McDonals suggests that the action of football is not necessarily a competition rather than a staged performance. These “staged performances” by football players set them apart as members of a different social class. After the loss, one would expect the players to be treated poorly. However, this is obviously not the case. This lens gives the viewer a new way to think about success and why the players act the way they do. Perhaps success is not actually about winning and losing, but instead about the performances they give on and off the field. This is why the players act honorably in the way that they do. They are treated as heroes because of who they are. However, they needed to be taught how to act and accept this role through the wisdom of Coach Gaines. Coach Gaines is shown as a father figure multiple times throughout this movie through his excellent coaching style and loving treatment of players.

Abusive or absent fathers, such as Don Billingsley’s father Charles and Mike’s absent father, can influence players to act in a certain way: to give up the curses and ignore the consequences that they cause. This will bring them success and will affect how others treat them. They are already treated well because they are football players, but could be treated poorly if they do not perform the way they are expected to. This is especially shown in the final scene, where it appears that Mike and Don are free of curses. They have learned their lesson from Coach Gaines and are rewarded by great treatment, despite the expected poor treatment that was previously present after a loss. No matter what happens now, they can be treated well as long as perform and act well. 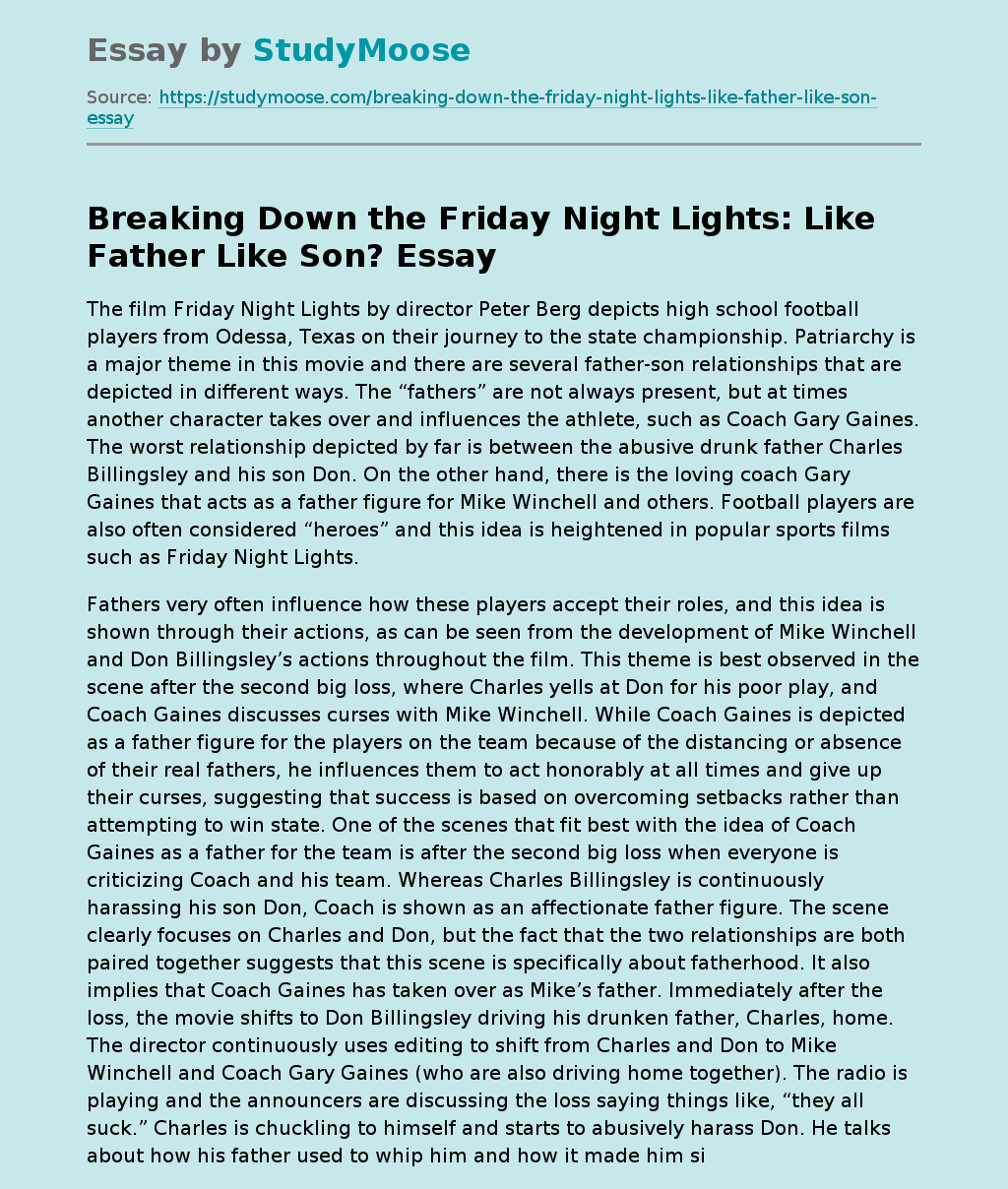