Relationship between Father and Son

Father and son relationships in The Iliad are not like you would see in America or in our culture today, but there is still a developed love for one another. Priam and Hector had a very strong and admirable relationship, yet it didn’t come from seeing each other every day. Fatherly affection is not touchy-feely, nor is it necessarily given unconditionally or freely. Rather, a son must earn his father’s respect and admiration, and it is by leaving home and fighting his own battles that the son is able to get this.

Don't use plagiarized sources. Get your custom essay on
“ Relationship between Father and Son ”
Get custom paper
NEW! smart matching with writer

They spent more time apart then they did together.

The distance they spent from each other only made their admiration grow stronger. This relationship is unique, and plays a big role in this epic poem. I know for me, it didn’t take being a great warrior or even earning my father’s respect for him to love me. It was automatic; my father loved me instantly and will always love me no matter what.

That isn’t the case in that day and age. Priam was a magnificent warrior during a majority of the Trojan War and earned his retirement for this. It’s only by following in his father’s footsteps and becoming a great warrior of Troy will he fully gain Priam’s love.

Hector was seen as the greatest warrior of Troy and could not have been more of a hero in his father’s eyes. Hector never shied down from anything or anyone.

He was willing to do whatever it took to make his father and even more importantly in his eyes, his country proud. From a mental perspective, one might interpret this self-motivation as the son’s quest to know the father through the crazy act of moving away from him in a literal sense, yet living his life in an effort to shadow the father’s actions and achievements. Priam saw this in his son and thought very highly of him.

Prima didn’t love Hector because of the fact he was his son, he loved him because of the man he became. Hector earned every bit of love and respect from his father. The death of Hector played a big role in the end of The Iliad. It was before the fight of him and Achilles, and after he was killed where we truly see the love that Priam has for his most prized son. Priam pleaded to Hector to not fight Achilles alone, for he knew he would be taken down (Homer 206). He told Hector that he could not bear the death of another son slain by Achilles. Nothing he said could persuade Hector to not fight, but I think deep down he knew it wouldn’t.

Priam knew then how big of a heart Hector had, and he would do anything to see him survive this battle. For the father’s part, the absence is not a cause for thoughtful feeling. In Priam’s case, it is only when Hector dies that he feels deeply emotional and recognizes his son’s achievement, that Hector has followed in Priam’s own heroic footsteps, a fact which confirms Priam’s greatness. We learn more about the love Priam has for Hector when we see what he goes through to retrieve his body from Achilles after he had killed him and dragged him away from his chariot (Homer Book 24).

Keeping in mind that Priam is the king of Troy, he sets out at night and goes to where Achilles is staying. He then persuades Achilles with multiple pleas to let him have a proper burial of his brave and courageous son. Priam risked his own life of being on enemy ground, just to get back the corpse of his son. When he returned back with the body of Hector, his family and the people of Troy were very remorseful and you could tell how much Hector truly meant to his father.

Relationship between Father and Son. (2016, Jul 29). Retrieved from http://studymoose.com/relationship-between-father-and-son-essay 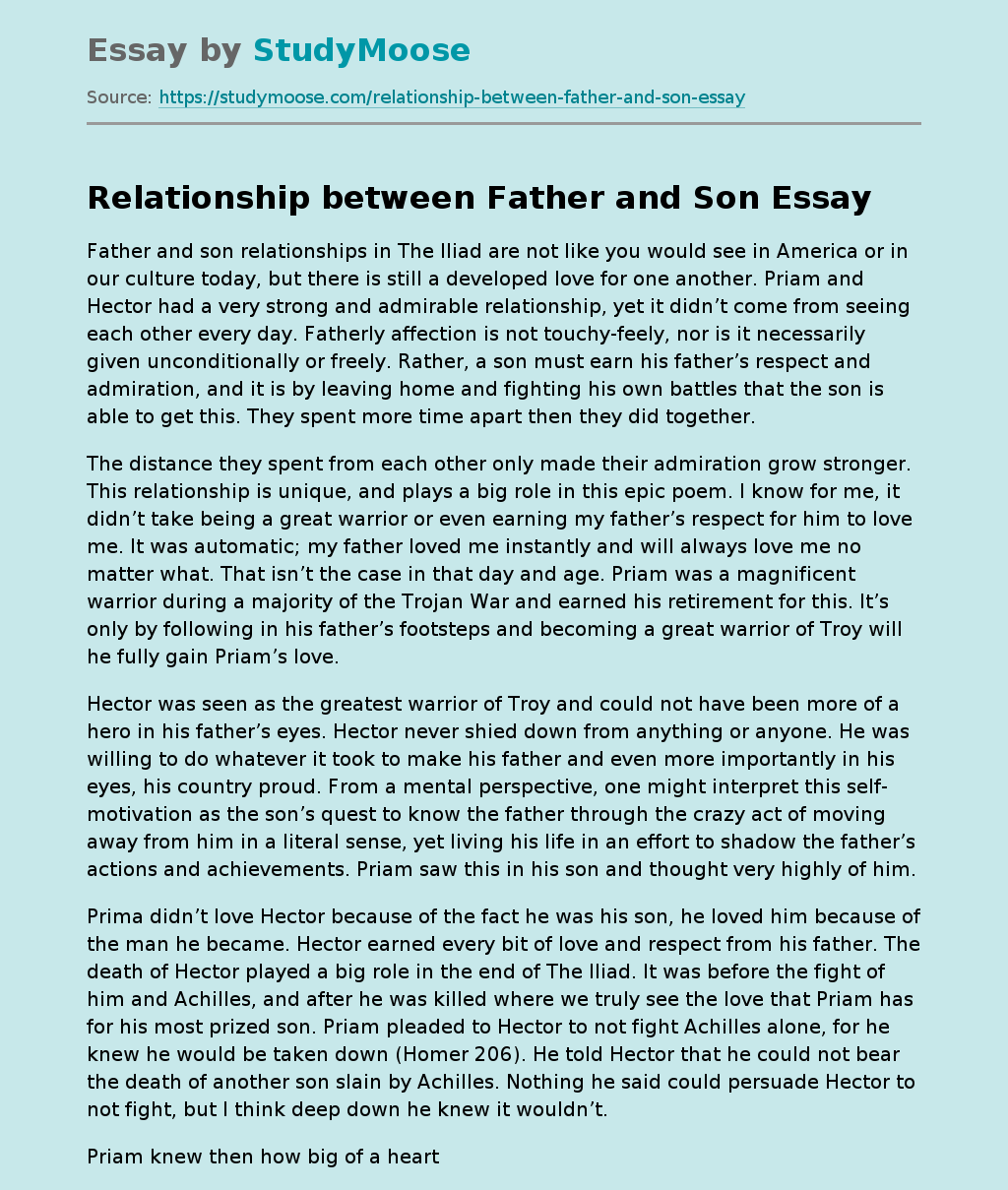