An Analysis of the Father and Son Relationship in Fences, a Play by August Wilson

Don't use plagiarized sources. Get your custom essay on
“ An Analysis of the Father and Son Relationship in Fences, a Play by August Wilson ”
Get custom paper
NEW! smart matching with writer

At the end of the play, the sons find themselves amidst a rock and a hard place since their fathers seem to be having an unbreakable tie with their sons which makes it hard for them to escape a similar fate to that of their father. This essay will evaluate the relationship between fathers and sons in the play “Fences” as well as the effects of this relationship in the characters life.

It will also evaluate literary elements like characters, theme and conflict

“Fences” has various characters. Troy Maxson is the main character in the novel. He is the father to Cory Maxisonand Lyons Maxison. Rose Maxison is Troy’s wife and the mother to Cory and Lyons. Troy has a best and longtime friend known as Bono. The two met a long time ago in prison when they were young men. Gabriel is the brother to Troy. He is his the only other sibling. He was wounded in world war II thus he has a metal plate in the head.

Troy’s father has also been featured in the play. He is said to be very evil. He ended up treating his family so ruthlessly that the family had to run away from him.

Characters like troy, Cory and Lyons are always chasing the dream of breaking ties with their fathers. However, the fathers seem to cling on the tie so tightly that the sons are unable to break it.This results to conflict and poor relationship between the parties. Troy, once escaped from his father due to his evil nature. However, the way troy was treated seems to have affected him so much that he results in treating his sons and the family the same way. Just like the father, Cory and Lyons were unable to achieve their dreams thus they ended up being failures just like their father.

The relationship between Troy and his father was far more complicated than anyone would ever imagine. Troy is however so much affected by this relationship such that the way he acts upon his sons is a perfect reflection of the way he related with this father when he was young. Troy says that “sometimes is wish I had not known my daddy. He ain’t care nothing about no kids. (…) But I will say this to him…he felt a responsibility towards us.” (Wilson, I, IV, p50). As Troy narrates his life with his father, he talks of a time when he tried to escape from home when he was young. However, Troy is hypocritical since he tries to act on his kids like his father tried to act on him despite speaking of his father degradingly. It is evident that Troy and his mother left their father because they “couldn’t stand that evilness” that possessed their father (Wilson, I, IV, p51). The similarity of Troy’s actions to those of his father foreshadows similar consequences. As a result of Cory and Rose ultimately leave him.

The dream that Cory had in his life is shattered by his father Troy since he forbids it. This makes the relationship between the two to be very edgy. Cory tries to escape from the intent his father had, but this does not bear fruits since his father’s presence in his life seems permanent. As Troy tries to refer to his son, he states that “I don’t want him to be like me! I want him to move as far away from my life as he can get.” (Wilson, I, ii, p39). Troy is always bitter which creates a tensed relationship between himself and his son. This, however, is as a result of the life Troy had lived in the past. Troy is always bitter because racism could not allow him to reach his dream. When his son Cory falls in his footsteps in sports, Troy does not allow his son to chase this dream since he fears that whatever happened to him would also happen to his son. He wants his son not to face the racism he faced during his time, but at the same time, he acts jealously and in an overprotective manner. According to Lochman, John and Karen, (p571), just like any other parent, his intentions were rather genuine, but his methods were extreme. He wants to dictate over the life of his son by shaping him rather than letting him explore the possibilities. Troy does not want to accept the possibilities that racism was scrubbed off and fears that his son would face the same. Cory wants to escape the path so much that his father followed but it is ironical that he ends up falling in the footsteps of his father. At some time, Cory tells his father that “just because you didn’t have a chance, you just scared I’m gonna be better than you, that’s all.” (Wilson, I, IV, p58). This strained relationship went on until Cory could not chase his dream of being a baseball player further. He ends up being a marine Corp which makes him as disillusioned as his father.

Lyons was also unable to escape from the influence of his father such that he finds himself falling in his father’s footsteps. The strained relationship between Lyon and his father is shown when Lyons goes to ask for money from his father during his payday. Lyons says that “I come by to see you…ask for ten dollars and you want to talk about how I was raised. You don’t know nothing about how I was raised.” (Wison, I, I, p18). Lyons was raised by a single mother in the absence of the father since most of the time when Lyons was young; Troy was in prison. This seems to make Troy guilty, and he seems to compensate his grown-up son for being raised in his absence. Lyons does not, however, approve the way he was raised in the absence of his father but he still seems to go for money from his father which is a contradiction since his father seems to have an unending impact on his life. However, Lyons tries to return to his father all the money that he had borrowed from him. “(Lyons: (Going into his pocket.)) Says, look here, Pop…” (Wilson, I, IV, p46). This was an act of freedom and independence. It is as if Lyons was doing away with all the reliance and dependence he had on his father. It is rather ironical that despite Lyons efforts to do away with his father, he turns out to be more like him since instead of achieving his dream of being a musician, he ends up in jail just like his father.

The relationship between the father and the son in Fences is more of a cyclical phenomenon where ultimately, one will still have an impact on the other. Troy tries to escape from his father, but the effects the father had in his life could not be scrubbed off since Troy takes over his father’s actions and similarly treats his family. His create a complicated relationship with his sons; Lyons and Cory who ultimately push him away from their lives. However, their sons end up being like him by not reaching the dreams they envisioned. Cory ended up as a marine Corp rather than reaching his dream of being a baseball player while Lyons ended up in prison just like his father instead of reaching his dream of being a musician.

An Analysis of the Father and Son Relationship in Fences, a Play by August Wilson. (2019, Aug 19). Retrieved from https://studymoose.com/an-analysis-of-the-father-and-son-relationship-in-fences-a-play-by-august-wilson-essay 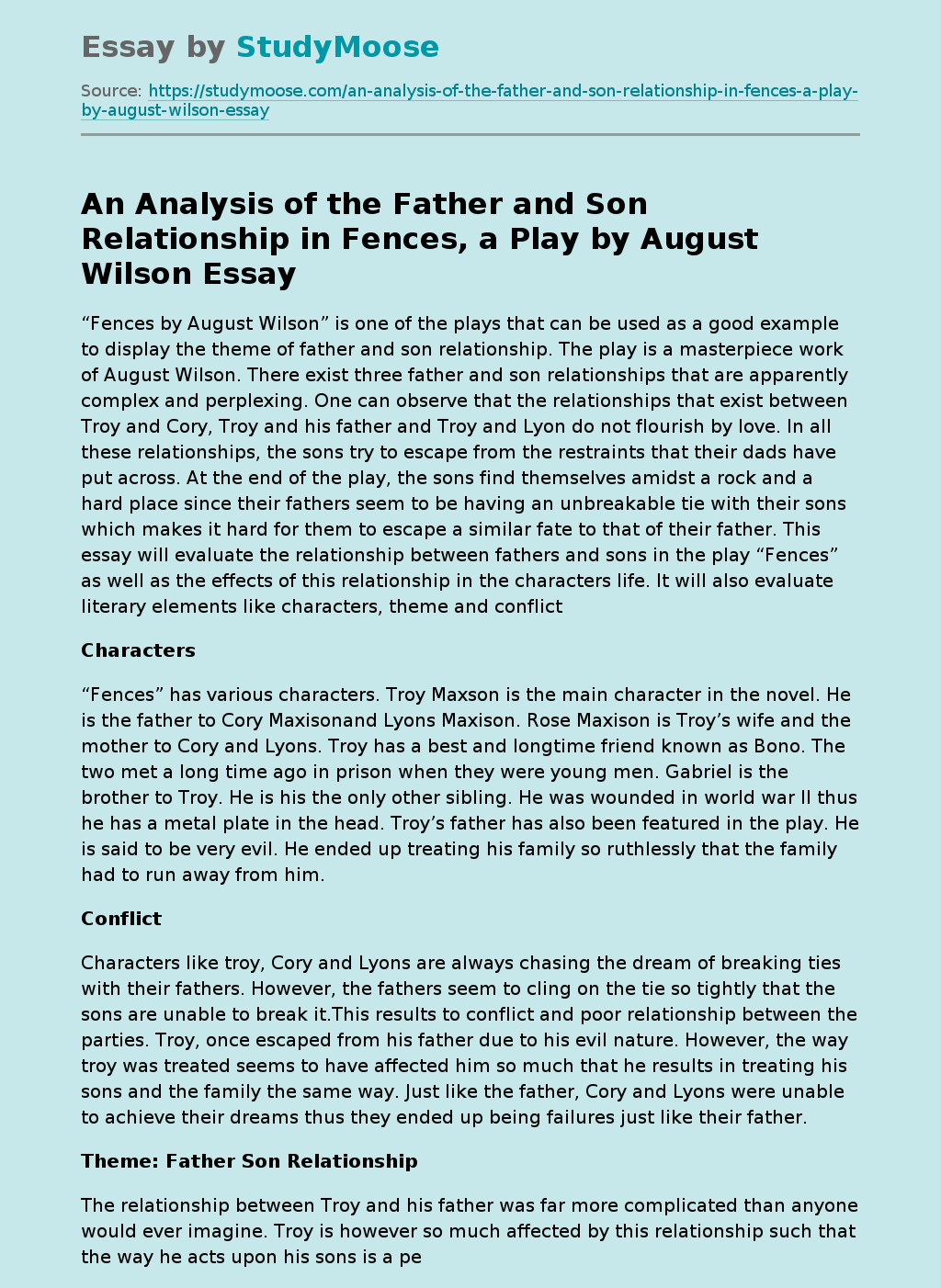