Around the early 1900s, racism was prominent and wasn’t sugarcoated at all. African Americans had to deal with several obstacles around this period because of the discrimination in certain things they wanted to partake in. These actions effected many African Americans because it forced some of them to look at the world with hatred and it limited many of their opportunities in life. Racism is sad reality in our nation that affects all types of people and it continues to shake and alter lives.

Don't use plagiarized sources. Get your custom essay on
“ Fences by August Wilson: Analysis of Troy ”
Get custom paper
NEW! smart matching with writer

People use racism as a sort of way to detect the differences with their peers and spike bias towards a group of people. Some people go the extra mile in insulting, attacking or mentally attacking others because of racist ideals they believe in. In the play Fences by August Wilson, Troy’s dreams of becoming a professional baseball player got ripped away because of his racial appearance. This single experience has slowly made him look at life differently.

He easily gets fooled by his inner thoughts because of the past racial discrimination he endured and believes his self-created illusions. Racism has played an important role in Troy’s life which is evident based on the certain decisions he has made in his life. Because of these experiences in his life, Troy’s rash decisions in the play causes tensions and conflicts with his family.

One of the rash decisions Troy does in the play is when he prevents his son from playing football. Based on the college scholarship, Cory had a bright future in playing football but Troy completely neglects that and says that Cory will not get “involved in no sports.

Not after what they did to me in the sports” (Wilson 1053). Because of the past discrimination Troy faced in his life, Troy also assumed that Cory wouldn’t get a fair shake either because of his skin color. Troy argued that because of his skin color, he was prevented from playing in the Major Leagues. Later in the story, he tells the coach that Cory isn’t allowed to play football and he told the recruiter to leave and to never come back. Troy doesn’t see that by pulling Cory away from achieving his dream at being a football player, he is creating tension and he is subconsciously not allowing Cory to have a better life than him. If Cory had got the opportunity and played football in college, he would have been able to get a college education while playing the sport he loves. Troy doesn’t see that however because Troy is still effected from the denial he got when he was trying to play professional baseball. Although he cares about Cory and he thinks by preventing him from playing football is only for his own good, that decision wasn’t wise because he is basically doing what society did to him which is preventing him from achieving his dreams.

Troy aspires to be fighter and a survivor in life and from Rose’s perspective that shows through his son Cory. Troy’s true intentions are to show his son that nothing comes easy. The ultimate flaw however is that Troy looks at the world in his perspective. Troy is trying to prevent Cory from going through the same harsh experiences as him but he is unintentional recreating the same obstacles which are preventing Cory from becoming the full potential of himself. Throughout the play, Troy is imposing his will on Cory and he is basically preventing him from exploring the world for himself. This causes Cory to have conflicts with his dad because they don’t agree completely. In the article “Baseball as History and Myth in August Wilson’s Fences” by Susan Koprince, Susan says that “Troy’s front yard is literally turned into a battleground during his confrontations with his younger son Cory” (Koprince 354). With each argument and conflict, Cory slowly characteristics change in the story. In the beginning of the story, he was a cheerful kid hopeful for his future. However because of the denial of pursing football and the constant back and forth between him and Tory, he becomes very bitter just like his father. This isn’t a good thing because once Cory picks up his father characteristics, it forces him to see the world in a single perspective and that’s not his full potential but an intentional effect from Troy’s reactionary decision.

Like stated before Troy isn’t trying to harm his family at all. Troy went through a lot in his past and he doesn’t want his family to go through that same experience he went through. He felt it was his job to be a father and protect his family from his past mistakes. Troy went to jail for fifth teen years for murder. A man he tried to rob pulled a gun on him so in retaliation he stabbed him. Experiences like this Troy doesn’t want any of his sons to go down that path. Lyons is Troy’s son from a previous relationship. While Troy was in prison, Lyons didn’t have a dad growing up and he didn’t really have guidance in the world. Lyons doesn’t seem particularly bitter about any of this. He just seems to accept things as they come. Lyons passion is becoming a musician. Troy however doesn’t see that as a serious thing. He instead sees that as a dangerous path. Troy says “You living the fast lifeâ€¦wanna be a musicianâ€¦running around in them clubs and thingsâ€¦ (Wilson 1041). Although Troy sounded harsh there, this was probably the most honest and sincere thing he told Lyons. Troy views Lyon’s dream as a risk because he’s not getting any income from this profession. Every time Troy gets paid, Lyon appears asking for a handout. This offends Troy because he never had handouts coming up. From the experiences of growing up in a white society, he believes that African Americans have to work for everything that they want. From the article, Susan writes that “Instead of limitless opportunity, [Troy] has come to know racial discrimination and poverty” (353). He wants Lyons to take on a safer route which is working somewhere with a structure rather than the freelance world of music. He doesn’t want Lyons to get lost in that music world and result into doing the things he used to do that caused him to go to jail.

Lyons doesn’t see the world like Troy. Lyons isn’t bitter at the world like Troy and he expresses himself through music. Lyons has the same mindset as Cory which is that they can do something special for their lives in this society full of opportunities. Troy believes that Lyons isn’t aware on the harsh treatment African Americans go through and it shows clearly when his son asks him for ten dollars. This conflict shows how Troy distance himself away from Lyons. Troy doesn’t feel comfortable giving out ten dollars because he feels like he’s being taken advantage of. This goes back to the self-created illusions Troy creates because of the past experiences he dealt with especially with whites. Troy basically creates a barrier to Lyons because of this fear. Lyons doesn’t want to take advantage of Troy but he wants a closer relationship with father. This isn’t possible because Troy doesn’t support Lyons’ career and he doesn’t give Lyons the same attention he gives Cory. Sadly, Troy doesn’t see that Lyons wants more attention instead he looks at Lyons as someone who is trying to take his hard-owned money.

Troy later in the play makes another decision that shifts the tone of play where he commits an affair with Alberta. Troy feels trapped in a marriage where he can’t display his true self. He doesn’t blame Rose but from this scene he looks very unapologetic. He felt like with all the responsibilities of being a father and provider for his family, he needed a way to escape all that. This is his reasoning for committing this fatal decision. Troy’s selfish act shows that he wanted to break a boundary he’s been limited too. He’s been limited from baseball, the status he’s been in at work and his marriage. Rose was crushed hearing that the man she gave her life and identity to committed an affair with another woman. It bothered her when he said he needed an outlet from his priorities. She said “Don’t you think I ever wanted other things? Don’t you think I had dreams and hopes? What about my life” (Wilson 1071)? She committed herself to the marriage and to repay her, he betrays her by having a baby with another woman. Because of this conflict, Troy and Rose’s marriage is severely jeopardized. Rose is still the mother of his children but she doesn’t recognize herself as a wife to Troy. She starts to build her own characteristics and beliefs after this conflict. Rose felt like she wasted her years with Troy so she began to build a life outside of the house she felt trapped in. During the last scene of the play, she tells Cory why the marriage went down the way it did. Rose recognized that she gave up her free will for love. She wanted to have children and be at one with Troy. She accepted that this was her identity. But because of this affair, it woke her up and made her a diverse character because she became independent rather than dependent. Troy’s decisions distanced himself away from his family as he lost his dominance in the household.

Troy Maxson went through a lot in his life. Troy has a singular perspective on the world. He has a strict demeanor because of how society viewed African Americans back in the 1950s. Troy cares a lot about his family even if he doesn’t show it. Throughout his life, Racism has been a barrier for him. He was once young and he chased his own dreams but because of his skin color, several “ideals” got in his way. Racism caused a lot of Troy’s bitterness towards life. He went to jail and ultimately makes sure he doesn’t fall back there. All of his decisions were very influenced by past experiences from racism. Whether it be denying Cory’s dreams, neglecting Lyons and breaking the barriers of his marriage with Rose. All of these decisions caused tensions around the family and ultimately fenced his family away from him. 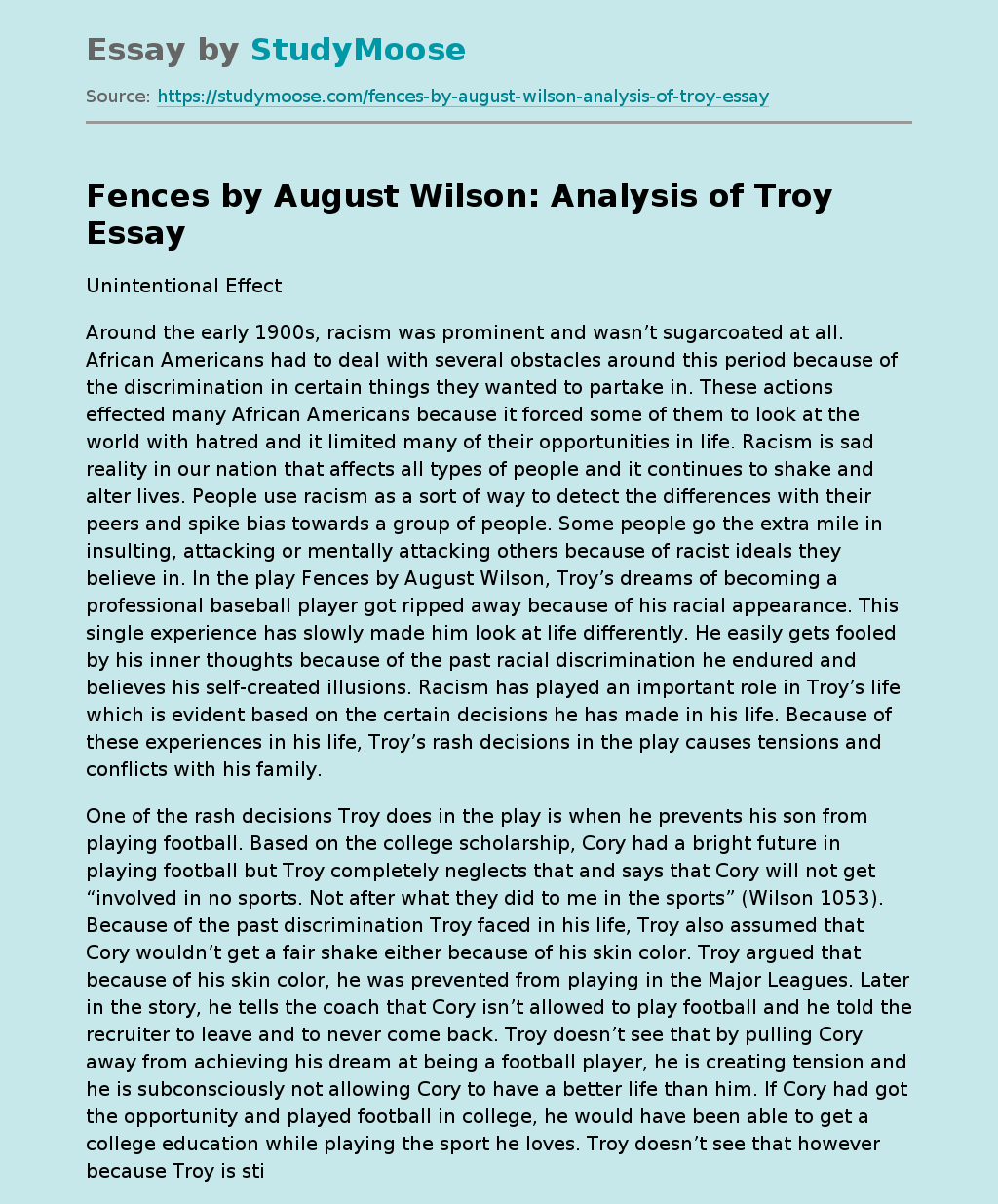