The play “Fences” is written and published by African-American playwright August Wilson in the year 1985. Set in the 1950’s, the play uses the concept of baseball to explain Troy Maxson’s battles with the hurdles of life. The story mainly revolves around Troy’s problems in life regarding his family. His son Cory was one of his major problems here and he also had a mistress in this story which caused the problem between him and his wife Rose. The relationships on this story broke apart as Troy chose his mistress Alberta over his family.

The thesis statement therefore, is the concept of family struggles, pride, choices, and forgiving. The whole story revolves around the failures and pains of Troy Maxson’s family and henceforth tackles about how they were able to solve it when they already learned how to forgive. The main character of the play is Troy Maxson, a garbage man with an unyielding faith in his belief and principles.

He is hard-headed when it comes to his beliefs in life and is more than willing to do everything just to fight for what he thinks is right.

This trait of his was displayed when Troy complained to his boss as to why black men were never allowed to drive the garbage trucks. He wasn’t afraid to voice out his thoughts and won’t stop until he gets what he wants. In the end, Troy’s boss gave in and he was promoted to be a driver of garbage trucks.

He was the first black man that was permitted to drive trucks in the whole of Pittsburgh. His stubbornness often leads to his success and he was very well proud of it. Troy Maxson also has an unwavering sense of authority when it comes to his decisions regarding his family.

An example of this is when he told his son Cory: “I’m the boss around here. I do the only saying what counts. ” (2015) He was against Cory’s aspirations of being a baseball superstar and never stopped until he made sure his son’s career was impossible. Troy was also a sports star before but he developed his grudge when the major leagues only started accepting black players when he was already too old to play. He told Cory’s coach that his son will never play again because Cory wasn’t able to stick to their agreement that he will still keep his job even though he’s already playing.

This ended up in a heated argument and Cory received his ‘strike one’. Two more strikes mean that he will be kicked out of the house. Troy has a lot of sense of responsibility. When Cory asked him whether Troy likes him or not, Troy answered: “It’s my job! It’s my responsibility! A man got to take care of his family. You live in my house… sleep you behind my bedclothes… fill you belly up with my food…cause you are my son! You my flesh and blood. Not ‘cause I like you! Cause it’s my duty to take care of you.

I owe a responsibility to you! (2016) This particular statement somehow showed that Troy doesn’t bother himself with feelings and only do things to other people out of responsibility and duty. August Wilson developed Troy Maxson’s character here through changes with his perspectives and ways. An example of this is when Troy decided to choose his mistress Alberta over his wife Rose. Troy stated that with Alberta’s company, he was able to find a side of him that he wasn’t able to express with his family.

He also said that the pressures of duty were taken off his back whenever he was with his mistress. This somehow showed that Troy Maxson sometimes also get exhausted with his responsibility to his family. Troy is the central figure here because his decisions, achievements, and failures in life are the elements that mostly affected the lives of his family and the people around him. Being the head of the family, he shouldered the responsibilities of being a father, provider, and guardian who acknowledges his duties and responsibilities.

The fence that Troy was building here has a kind of symbolism and Bono, was able to explain it in his statement: “Some people build fences to keep people out… and other people build fences to keep people in. Rose wants to hold on to you all. ” (2027) Death is one of the most important themes in this play. Troy often challenges death in the course of the story stating that: “Death ain’t nothing, I done seen him. Done wrassled with him. You can tell me nothing about death. Death ain’t nothing but a fastball on the outside corner. ” (2003) Rather than considering it as a vague unknown, Troy looks at death as a natural part of life.

He also thinks that if he only keeps his vigilance, he will be able to defeat death from overpowering him all over again. In the end of this story, it is again death that was able to reunite the family. When Cory doesn’t want to attend his father’s funeral, Rose said: Your daddy wanted you to be everything he wasn’t… and at the same time he tried to make you everything he was. I don’t know if he was right or wrong… but I do know he meant to do more good than he meant to do harm. He wasn’t always right. Sometimes when he touched, he bruised. And sometimes when he took me in his arms he cut.

” (2045) I can say that this line was the one which was able to describe Troy’s character more than anything else. For me, Troy Maxson’s personality here is the strongest because of his ability to exude control and authority to the persons around him. Though his decisions are mostly on the wrong side and unreasonable, his strong personality helped develop improvements not only on his side. Troy may not be the best father, brother, and husband in the world but he served as a tool in molding his family into better people. Works Cited: Wikipedia. “Fences”. Bookrags. “Fences: Plot Summary”. 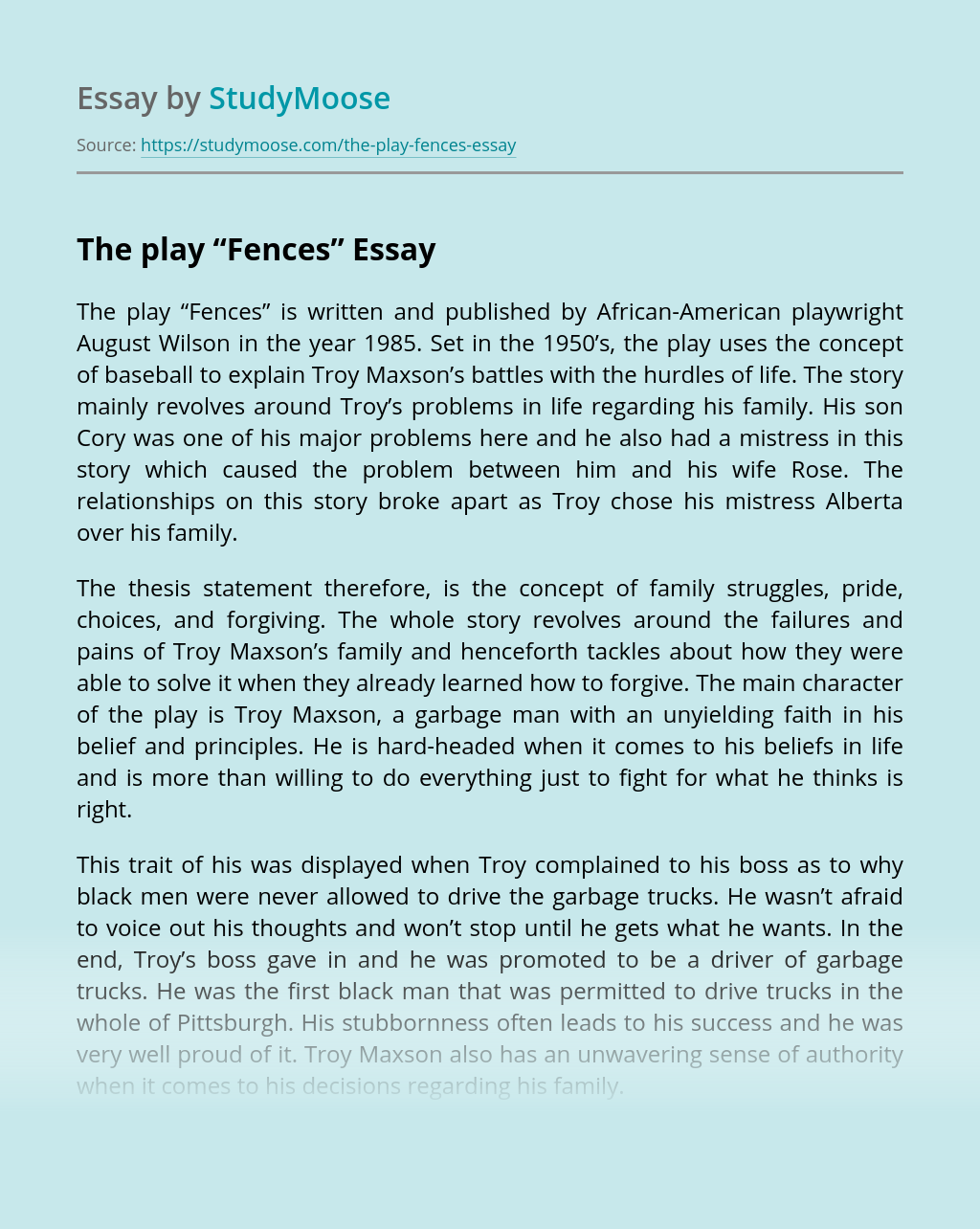