Problems with Utilitarian and Kantian Ethics

The issue in question is one with regards to morality, the problem of answering such questions as how does one live the good life? What is the good? How does one determine which actions are right and which actions are wrong? It is interesting from the get to go that humans seek to answer these questions, one could assume that our own intuition could answer these questions for us, or turn to the respective religions that are overflowing with rules of morality and life laws.

Don't use plagiarized sources. Get your custom essay on
“ Problems with Utilitarian and Kantian Ethics ”
Get custom paper
NEW! smart matching with writer

Nevertheless, throughout history theorists and philosophers alike have attempted to answer these questions through analysis and occasionally under the influence of their particular religions as well. Today we study a range of philosophies from Plato to Peter Singer, and in most cases we find that the moment a theory seems to be adaptable and just to our own lives, a flaw surfaces and is usually followed by many more which make us question our faith in such a theory initially.

Kantian ethics and utilitarianism do just that.

The biggest debate in ethics today seems to be between Kant’s categorical imperative and the utilitarian’s greatest happiness principle. To realistically examine these theories we must recognize that there are significant problems with both ideas, which lead us back to the questions we started with. It is apparent however, that alternatives to these two conflicting schools of thought have been offered. One example is that of WD Ross who proposes some inclinations as to how both theories may be used and how certain aspects of them must be discarded at the outset.

One popular criticism of utilitarianism is that it deals too much with the consequences of one’s actions, and the same for Kant except that it focuses too much upon intentions. For the purposes of this essay I will explain how both theories fail as moral guideline on how to live life, and touch upon some components of morality, which I feel are imperative in order to live the good life. Read a history of tattoos and piercings

Utilitarianism is a theory that maintains that pleasure/happiness is the only intrinsic good, and that whatever act, choice etc. that any one person makes is to follow the maxim that it should create the greatest happiness for the greatest number of people. Of course there are more complicated explanations (and alterations) of this theory, but in sum, this is the main point. There are many critiques of utilitarianism and in the text “Eleven Objections to Utilitarianism” by Sterling Harwood; eleven criticisms that are often argued are displayed. I have chosen some of the arguments I find relevant to discrediting the theory in order to present why utilitarianism is not a theory that we should base our moral actions on.

Many find that utilitarianism is too demanding of us, that it asks too much of us when placed in real situations. An example is given of a perfectly healthy person going into a doctor’s office who has five other patients in need of transplants. Under utilitarianism this person should sacrifice him or herself in order to save the other five. This situation clearly shows how unrealistic the demands of the utilitarians are. Why should someone voluntarily give up their own life in order to save the lives of 5 strangers? Utilitarianism maintains that it is about numbers, because five peoples suffering being alleviated for the cost of one is justified. For the healthy individual, this type of personal detachment from one’s own life is impossible (Harwood 181). This argument is sufficient to discredit utilitarianism, but there are a number of others, which also have quite good point, as we shall see.

It has been claimed that the greatest happiness for the greatest number is unjust. It allows for decisions to be made which truly are not fair and don’t serve justice to those who are deserving. We are presented with the case of the scientist who has killed his wife just before he discovers the cure for cancer. Utilitarianism would allow the scientist to go on with his studies in order to find the cure before he is jailed, because his cure would improve the lives of many others, the integrity of the murdered wife is defenseless under this theory. Harwood presents a defense from the standpoint of the utilitarian, that “we need not develop a moral principle that covers every imaginable problem in every fantasy land.”

1 This argument is responded by saying that regardless of how unreal the scenarios may seem it is more than possible that they will eventually happen, and even if they don’t, we couldn’t have predicted that they wouldn’t in the first place. Another way that utilitarianism is unjust is that it allows for the ill treatment of others, for example slavery. If there are six slaves on a farm, and ten people being served by them, the slaves are outnumbered therefore they are to remain serving the ten people. If we went by the laws of utilitarianism then slavery could have never been abolished.

2 Since utilitarianism maintains that the only true good is satisfaction or happiness, it places no intrinsic value on truth, knowledge and reality which are important aspects of life and aren’t present inside the machine (Harwood 188). In addition, it seems as though a life spent in a machine producing happiness would be quite selfish and unproductive, what about reproduction? Where would one find the time to meet someone they care for and then produce babies to continue the evolution of the human race? Something to think about.

The final argument against utilitarianism that I find relevant is that it makes decisions on an interpersonal level that are truly impossible to compare. The funny thing about humans is our capacity to distinguish what we like and what we don’t like. There is no one who can determine another’s capacity for pain or suffering. If my getting a tattoo feels great, and my friend’s getting a tattoo makes her faint from the pain, one cannot state that the actual amount of pain is any less for me or any more for her. It is strictly in the individual and each situation can only be evaluated on a contextual basis. Pleasure and pain are solely subjective experiences; there is no accounting or disputing matters of taste. The masochist’s pleasure comes from what most would consider pain, but if another’s physical pain truly feels good to someone else, who is to say that they are wrong? Utilitarianism does not take this into account. It assumes the consequences of an action will automatically cause either happiness or unhappiness, the problem is it is impossible to dictate a moral theory in this manner because humans are an ever unpredictable, evolving species feeling and experiencing different things in different ways all the time.

Kant’s moral theory or deontology has similar problems regardless of how much it differs from utilitarianism. In the case of deontology the problem lies with the matter of intentions. Kantian ethics maintain that the intentions one has are all that matter when placed with arduous moral choices. At the base of Kantian ethics is his categorical imperative, which is a set of rules that outline “that only the good will, a will to act out of a sense of duty, has unqualified moral worth.”

3 The categorical imperative simply, is this: “Act only on that maxim through which you can at the same time will that it should become a universal law.”

4 And that we should never treat anyone as a means to an end.

According to Kantian ethics there are universal moral laws, which we must follow unconditionally. There are many problems with this, and first and foremost I feel that Kant is trying to place a one-dimensional theory of ethics on a three-dimensional world full of unexpected incidents. Humans have proven time and time again to be extremely unpredictable and the nature of the earth doesn’t help either. By the nature of the earth I mean the unexpected, unexplained happenings that occur and do not cease to surprise us. Kant’s theory is too authoritative for us to adopt and positively function with. Admittedly, it is a noble theory, naturally with good intentions but it seems as though his Christian background had too much (dare I say) of an affect on him. It is unrealistic and inapplicable to our society and humanity, because sometimes we need to lie, sometimes we need to deceit and sometimes we need to kill.

Another problem with Kant’s theory is that it not only fails to solve some of the tough problems we face, it creates more problems. Take this situation for example, C wants to kill X, C knocks on B’s door and demands to know where X is. B can either lie and say he doesn’t know (even though he knows very well that X is hiding in his basement) or he can tell the truth and thus allow C to murder X. Under Kant’s theory B must tell the truth which is arbitrary in the obvious sense, but also, if B could lie to allow C to calm down until she is thinking rationally and able to discuss the problem with X, then the murder could be avoided altogether. If B follows Kant’s laws then he creates more problems, like dealing with a murder, the guilt, the loss of X etc. I don’t see and others agree, how this really solves any problem, it really is just a code of behaviour to live by and it seems like a simple cop out to respond to life’s obstacles.

The central theme in Kant’s ethical philosophy is that one’s intentions out rule the consequences that result from any actions. Again, this is a noble approach but there is a lot more to it then intentions as we have seen from many of the cases presented. The trolley situation for example, where the brakes stop functioning and the only way out is to either kill five workers on the track or one to the side. The Kantian answer would be not to steer away from the five workers because it would be unfair to use the one to the side as a means to save the others’ lives. This is a tough case no matter how you look at it. The utilitarian view seems like a better answer, sacrifice one for the greater number, but regardless of how you look at it, this case is no win. The main problem with Kantian ethics is that it deals with intentions, and while they are important in distinguishing one’s actions, they are not the only factor in question when placed with life’s dilemmas.

Problems with Utilitarian and Kantian Ethics. (2020, Jun 02). Retrieved from https://studymoose.com/problems-utilitarian-kantian-ethics-new-essay 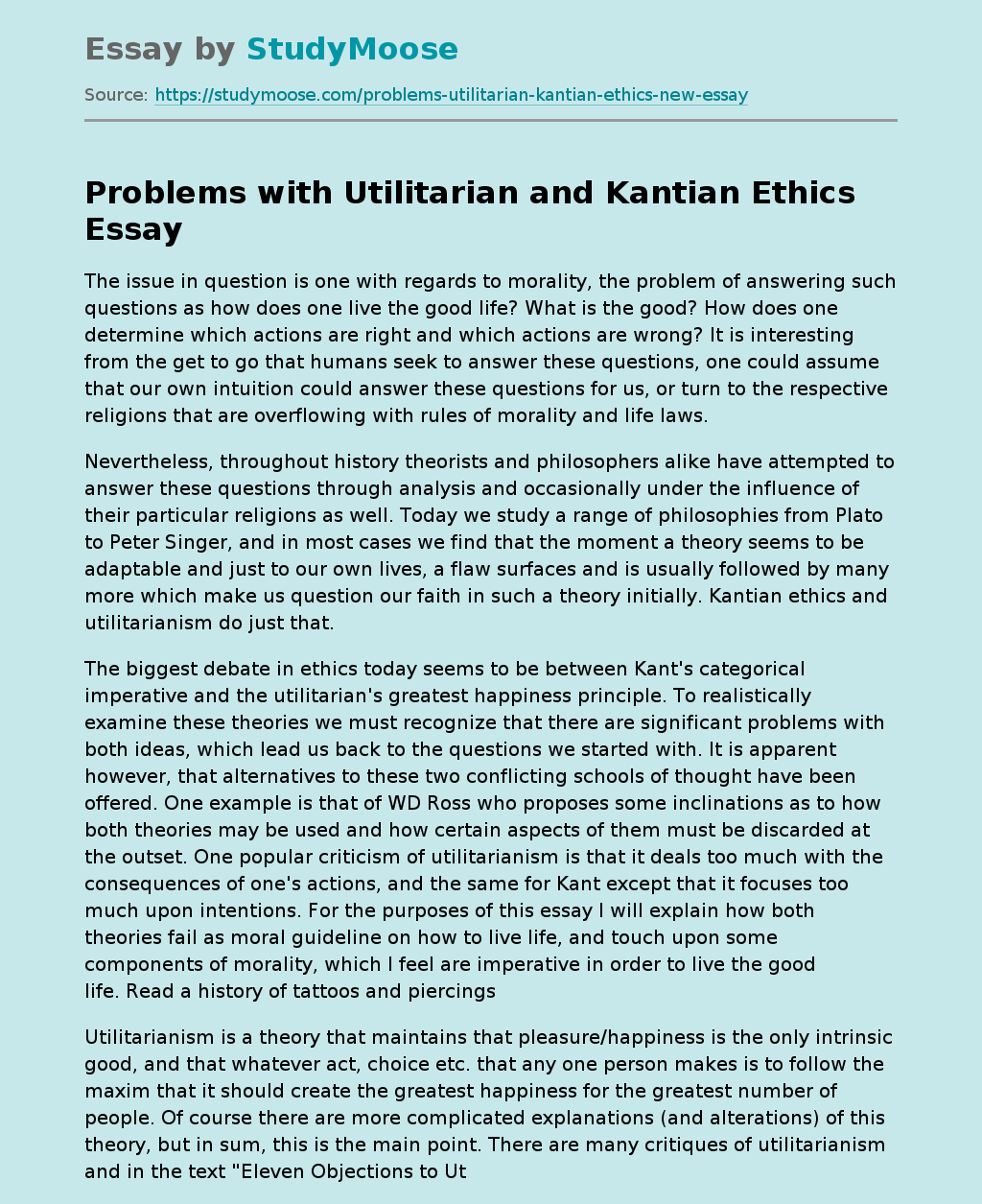