Human beings put so much value on other people’s interests. They find that if they satisfy their hunger for helping others, they (in turn) will have satisfaction for themselves. This was shown in Mother Teresa’s giving to others without taking anything back. However, as with everything else, there are exceptions. I know many people (i.e. car salesman ha-ha) that have only their interests in mind when they are taking action. This brings us to the discussion of the difference between psychological egoism and ethical egoism and my position upon ethical egoism.

Don't use plagiarized sources. Get your custom essay on
“ Psychological Egoism and Ethical Egoism ”
Get custom paper
NEW! smart matching with writer

I will begin by defining both psychological and ethical egoism. I will then state the counterexamples/arguments against it, and finally critically assess my position on ethical. Psychological egoism, as Dr. Belcher describes it is, “Psychological egoism is the claim that humans are (and can be) motivated only by selfish desires or that humans can pursue only their own self-interests.” This means that every action that helps others turns into a selfish one because the action gives satisfaction or happiness to the human that performs the action.

There are many counterexamples of this theory. I will give two: First, all actions are motivated by desires, therefore in seeking desires, I am doing what is in my interest.

Secondly, we seek our own happiness; therefore our desires seek happiness not selfishness. Next, I will give arguments against psychological egoism. First, the argument is flawed in onto itself. When humans choose to pursue their own interests, who is to say that these interests are selfish (selfish being a purely subjective term).

Secondly, if an action gives pleasure to a human, it does not necessarily mean that the human set out to get pleasure. Psychological egoism, although on first glance, may seem logical; it is flawed in its own arguments.

Ethical egoism is the theory that the promotion of one’s own good is in accordance with morality. It is what one “ought” to do. In the strong version it is held that it is always moral to promote one’s own good and it is never moral not to promote it. In the weak version, it claims that although it is always moral to promote one’s good, it is not necessarily never moral not to do so. There is one solid, logical argument for ethical egoism. If, in the wilderness, two humans come across the only source of food (which happens to be enough for one human), a dilemma arises if both claim the food. The rational idea would be to accept an equal share of the food. However, both humans would only have half as much food as they need. Therefore, there is no possible resolution and they must fight for it. They must resort to the “might makes right” theory and in the interest of living, they must indirectly kill the other one. Here are two main arguments against it: First, only the human in question can say what is best for him/her.

No human can say that they clearly know what is better for another human. Moreover, helping others is offensive to them. It is presumptuous to show a human that they are inadequate and that others are able to do what they cannot. Secondly, given that any argument that puts forth the idea of a different treatment for different groups of people without any justifiable differences is unacceptable arbitrary. Ethical egoism makes people put more importance on themselves than others; therefore, ethical egoism is unacceptably arbitrary. Although ethical egoism is trying to be helpful, it seems that the argument goes about it in a very selfish way.

I will try to defend ethical egoism. The main argument I will put forth was originally created by Ayn Rand. 1) We must accept that life is of the utmost worth. Humans only live once and if we have any value on the individual, we must adhere to this claim. 2) Altruistic theories regard the individual as something that must be sacrificed for the greater good of others. 3) Altruistic theories do not take the worth of the individual life into account. 4) Ethical egoism’s main philosophy is that the individual life is of utmost value. 5) Therefore, ethical egoism is the most logical theory. The second argument for ethical egoism runs along the lines of the first. Humans ought to act on whatever will promote the interests of everyone. The interests of everyone can only be promoted if humans pursue their own interests. Thus, every human should look out for him/herself.

I can see one major flaw with this argument. Although it seems that humans cannot see what is good for other humans, in most real life scenarios (the man that is about to be ran over by a truck), we can safely say that we know what is best. We should push the man out of the way. Furthermore, why are the interests of the individual so important? Is not every human being an individual? Therefore, all of our interests are of equal importance. It is a prejudice to take our interests above others.

Although, the arguments against ethical egoism seem to be solid, I believe that greatness cannot be achieved by looking out for the interests of the entire group. Genius is not a group effort. I do not believe Mozart or Van Gough could have made such great works of art if someone had been looking over there shoulder saying, “no, no, that doesn’t look/sound good at all.” Even though on average humans will get the better for themselves by looking out for the greater good, we will never see anything that is a work of genius. 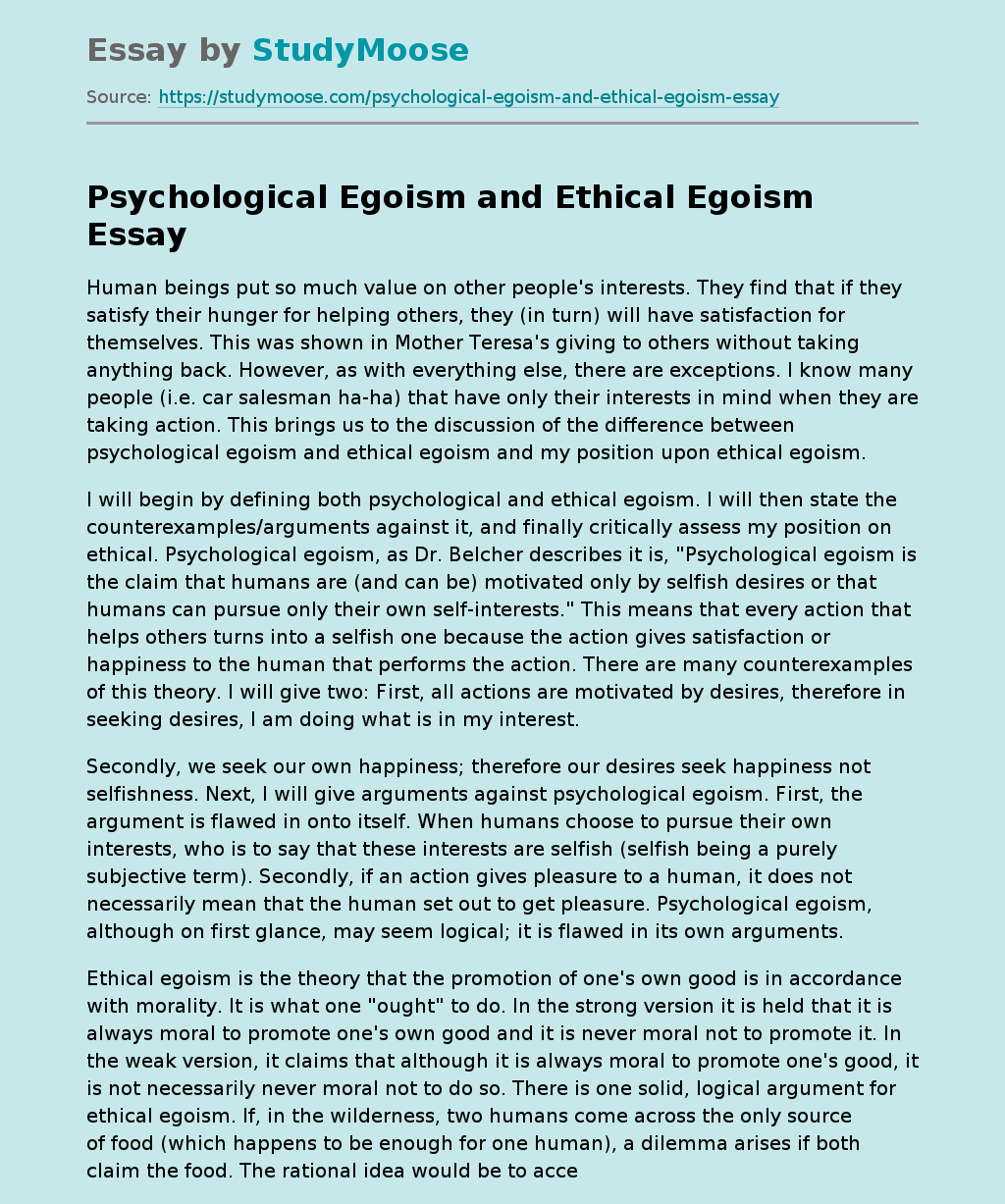