Psychological Egoism pertains to the doctrine where the object of all human actions is for the attainment of their self-interests. It occurs even in a situation wherein the acting agent seems to do a particular thing for the benefit of other people because it the very idea that he has able to do good for others may bring satisfaction to him. Psychological Egoism tends to create a bad characterization on the nature of man. It appears that man, in its state of nature, would only act so as to gratify his own interests and get all the things that would satisfy or that are pleasurable for him.

Don't use plagiarized sources. Get your custom essay on
“ James Rachels and Psychological Egoism ”
Get custom paper
NEW! smart matching with writer

As introduced earlier, the mere act of helping other people, just like sacrificing one’s enjoyment for the benefit of other people may showcase the principle of psychological egoism. To reiterate the point of the psychological egoism, all the ends of man is directed towards the attainment of pleasure. Hence, the reason why a person sacrifices his own enjoyment is for his own sake, or for his won pleasure.

Therefore, he is not being unselfish but still selfishly acting.

In this manner, the concept of altruism may not really be possible for the very reason, as presented above (that all acts are geared towards the gratification of self-interests even if an action seems selfless) that there is no really such thing as selflessness but always involves one self. Many people have been hooked with this belief that man is naturally selfish (negative or positive selfishness is still a form of selfishness).

As a result, people try to use the principle of psychological egoism to defend their criminal or unjust acts.

As how asserted, they are justly doing what their nature asks them to be – that they are acting naturally. But as how Socrates proved Glaucon wrong for saying that an unjust life is always beneficial than a just life, James Rachels attempted to evaluate the arguments held by the advocate of the psychological egoist in saying that man by nature is selfish and that it is natural that all his actions should be for his own pleasure. Rachels’ refutation against psychological egoism starts in his distinction of what it is to be called as selfish and what it is to be called not selfish.

For Rachels, selfishness implies that all actions that are for the benefit of oneself and not considering their effects to other people. At the same time, Rachels elaborated the very idea of not being selfish. Not being selfish pertains to an act in which the acting agent considers the feelings or the welfare of other people recognizing the fact that he might do what could give him more pleasure but doing the other act so as to arrive at mutual or common benefit.

The common misconception that most people have in considering the doctrine of psychological egoism is that for an act to be named as unselfish is to be able to bring advantages to other people but not getting anything from it. This is obviously the misinterpretation which tends to mislead those who find psychological egoism plausible. Rachels suggests that unselfishness does not necessarily mean absence of any advantage for the acting agent.

The idea of being unselfish is that a person might only do things for his own good without taking into consideration other people’s well being but because he recognizes that others may also do the same action against him (considering the concept of justice), then he would not just act for his own sake. What Rachels want to emphasize in the book is the fact that the issue is not on the problem if selflessness is really possible. But what he sees is the fact that selfishness and unselfishness is really different from each other.

The mere fact that a person consider how his friend would feel is he will stay with him during his hard times would really not make him selfish. Though he feels happy for helping his friend it does not follow that he isa acting egoistically. He satisfies himself and at the same time he brings good to his friend. And that is unselfishness for Rachels. The arguments of Rachels are so significant in a sense that he really brings out the object of the debate and the misconception imposed by the principle of psychological egoism – that is the distinction of selfishness from unselfishness, and the irrelevance of selflessness in the discussion.

Rachels’ recommendations or interpretations against the psychological egoism is viable for the simple reason that one should consider the welfare of others in order that he could also expect that in return, others would also do the same thing. For Socrates, that is what the concept of justice is all about; and the same thing for Rachels. In essence, Rachels’ arguments against the doctrine of psychological egoism presuppose that man is not naturally bad or evil as how the advocates or proponents of psychological or ethical egoism say.

He implies that the genuine nature of man is the fact that he looks for other people, he has compassion for them, and he recognizes that he does not only live for himself. In return, the greater good is achieved because if everyone would have the same attitude and realization about the world and mankind then all would be confident that they would not be unjustly treated by others or simply used as means to their ends. To sum up and conclude, Psychological Egoism proved nothing but the truest essence of justice.

Rachels successfully shared a very interesting and very enlightening truth about the flaws of the psychological egoism. The debate was not if selflessness is possible or not. But the main argument is whether man could act unselfishly which Rachels proved to be possible. Considering the welfare of other people and at the same time being benefited by the same act was a very delightful idea that was effectively conveyed through Rachels’ arguments. 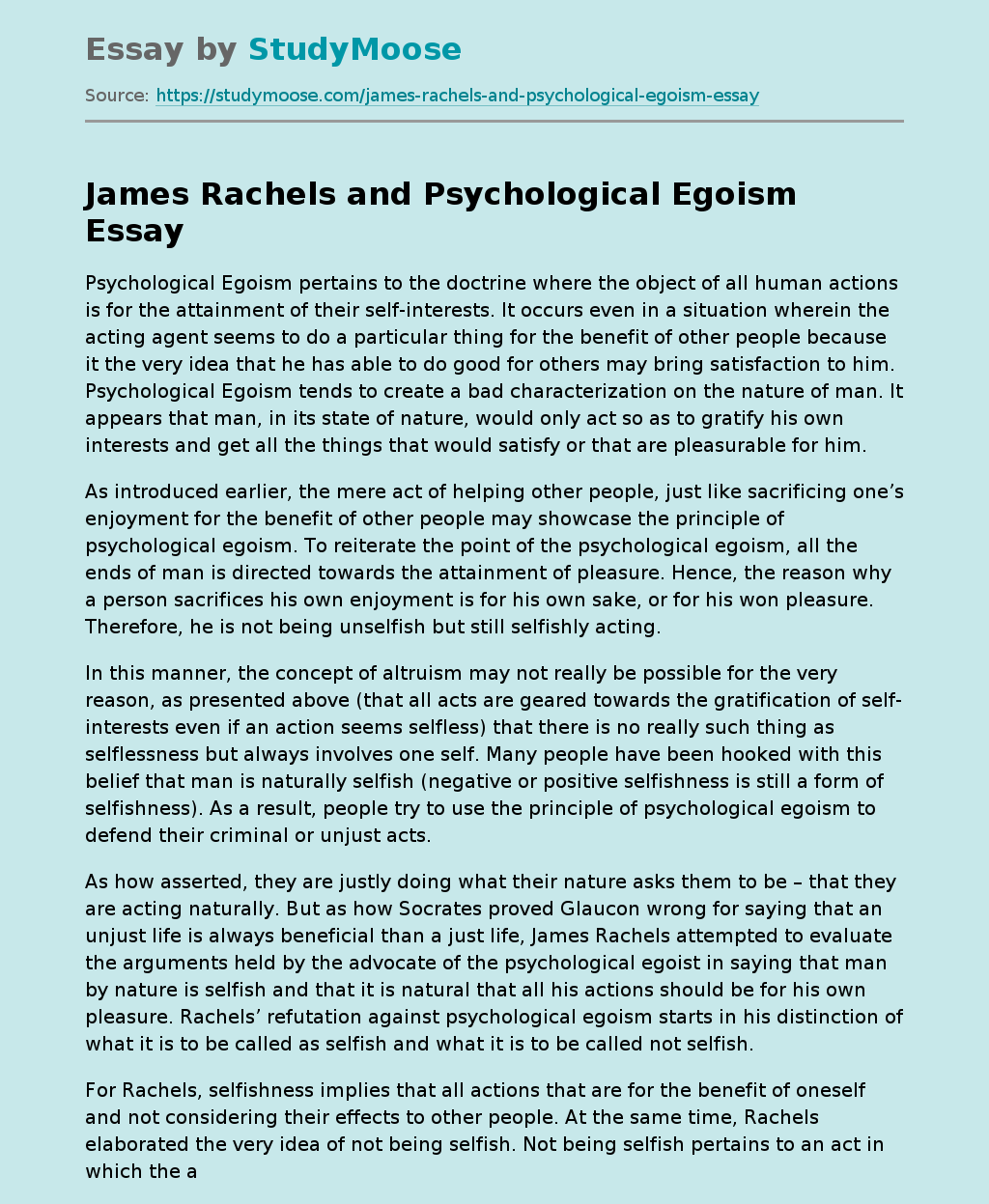