The Psychological and Social Effects of Eating Disorders on Teenage Girls

The Psychological and Social Effects of Eating Disorders on Teenage Girls

Eating disorders is a term consisting of psychological illnesses commonly defined by the abnormal eating traits which may involve excessive or insufficient food taking which may be of harm to an individual’s mental and physical health. These eating habits commonly found in children and teenage girls can cause very serious changes in them leading to life threatening emotions and health problems. There are three types of eating disorders found in children (Agras, 2010).

Don't use plagiarized sources. Get your custom essay on
“ The Psychological and Social Effects of Eating Disorders on Teenage Girls ”
Get custom paper
NEW! smart matching with writer

Anorexia is a condition where a child refuses to consume adequate calories with the fear being fat out of an irritation and intense. Binge eating, this is where a child gorge fastly on food, without taking a break. Bulimia is the situation where a child rapidly overeats and eventually purges out the food by using laxatives or vomiting to prevent gaining of weight (Agras, 2010).

Children and females at their teenage are the most vulnerable by this eating disorder.

Social pressure, the introduction of western culture is converting and encouraging the act of being physically more attractive and being slim bodied. Teens easily develop that perception that they are fat even though they have a normal body weight. This societal pressure especially in teen girls triggers losing of weight obsession, being thin and dieting.

Favorite activities, the activities that value leanness where teenage girls participate like modeling, running and wrestling can lead and increase risk of this eating disorders. The other psychological factor is lack or low esteem by the teenage girl, which can prompt the girl in using her weight loss or eating habits to attain a sense of control. Personal factors also like perfectionism or anxiety might play a huge role in developing eating disorders in teen girls and can be associated with biological or genetic factors (Heller, 2003).

Child abuse, which entails sexual, psychological and physical abuse, is one effect causing eating disorder in teenage girls. The neglect by the parents or the guardians of these children can subject them to an intense eating disorder to achieve a sense of comfort may be in an ecosystem where the kind of diet they take is insufficient or unhealthy. This can drastically change the neurochemistry and psychological structure of their growing brain (Heller, 2003).

Social isolation is also a psychological effect of this messy disorder in teenage girls really affect the well-being of them emotionally. Those teenagers who have been socially isolated have a higher rate of mortality in general compared to individuals with established relationships. The magnitude of the danger associated with this social isolation is far much comparable with cigarette smoking combined with major psychological and biomedical risk factors in teenagers. This can be inherently depressing, stressful can rapidly provoke anxiety in teenage girls thus in the attempt to stabilize these mixed feelings a teenage girl may end up engaging in emotional eating in the act of finding comfort (Heller, 2003).

Still in the psychological effects of teenage girl eating disorder, parental influence has been a long cause in the development of eating habits in them. Parental influence is directly shaped and manifested by various factors including dietary choices, which are dictated in their cultures or even ethnic preferences. Teenagers parents eating habits and how they are directly involved in the expectations of the eating behaviors of their children and the genetic predisposition of their families and even the relationships between the teenager and her parents. The absence of a general and good climate and the absence or presence a nurturing better environment can be a psychological issue (Heller, 2003).

Another effect of girls’ eating disorder is peer pressure, which really affect them in the sense that in order to gain a slim body and a good body image they opt to a change of attitude towards normal eating habits. This much habit trait is fueled by peer pressure where the rest of the teenage girls are busy assigning themselves a busy schedule to change her eating traits. This affects the teenage psychologically hence leading to bad eating habits. A study conducted showed that 40% of 9 – 10 years old teenage girls are working hard to lose weight all due to peer behavior (Agras, 2010). This disorder is easily found in elite athletes where you find that some of their peers are dieting and the rest of friends pressuring them leading to eating disorder (Heller, 2003).

Cultural pressure also play a greater role in affecting the teenage girl psychologically, some cultures emphasize on slimness, which is pervasive, and mostly common in western countries. The entertainment industries, fashion and media plays a bigger role in ideal bodies and beauty as a whole. Cultural pressure in teenage girls to be perfect and is a very important factor towards the development of this eating disorders. When all women from all races start an evaluation based on ideal, body culturally increases eating disorders in girls (Heller, 2003).

Ultimately, eating disorders greatly influences individual’s quality of life, self-image and how one relates with others in society. It adversely affects day-to-day living and physical well-being of teenage girls. The scope of problems associated with eating disorders prompts intervention of measures to curb or treat. Social factors contributing include media and the rest of presentation stating the ideal as slim and fit. This is a desire for teenage girls in modern life who always need to keep feat. It is also contributed to mixed messages about health and fast food where all believe to add weight fast food is the best choice. Some occupation which some of teenage girls have been into practice emphasizes on body shape and size. It forces some of them to take pills to keep body feet. This mostly affect girls whose field is gymnastics and modeling. Their performance is greatly contributed to what they eat, by so they believe underweight to be healthy and favour in their occupation. To cope with this believe, which sometimes turns into their favour they tend to adopt harmful eating habits. It is also contributed to combination of biological and behavioral factors. Teenage girls may be influenced by cultural images, which favour bodies with underweight to be healthy. Teens with eating disorders may struggle with various problems such as.

Anorexia nervosa which is associated with starvation affects most organ system of teenage girls(American Psychiatric Association, 2011). Its physical signs and symptoms include constipation, it occurs when movement of bowels occurs in difficulties or less frequent. Although normallength of time of bowels varies widely between one girl to another where some have its movement experienced three times a day whereas others two but than three days without a bowel movement is too long resulting to stool being harder and to pass becomes too difficult.

Other symptoms of anorexia are abnormal heart rate. This is slow heart rhythms, which are caused by premature ventricular contraction, which is related to eating disorder by teenage (National Association of Anorexia Nervosa and Associated Disorders). This can cause sudden death especially teenagers hence needs early medical attention or else to avoid disorder eating. Nervosa is also associated with abdominal pain among teenage girls with eating disorder. It is a mild stomach pain or cramps which has numerous causes which include constipation, indigestion all brought by eating disorder.

Another social effect to teenage girls resulting from eating disorder is dryness of skin. It is a condition where first element of defense lacks moisture.it might be caused by cholesterol or malnutrition which all is associated with eating disorder. Fine body hair is another effect of eating disorder, which many teenage girls experience; it comes by due to lack of sufficient supplement in their diet supply. It greatly affect teenage girls since some consider as their first beauty, it makes them stressed since it is hard for them to maintain long and fine hair.

In addition to social effects on teenage girls, resulting to eating disorder is lack of menstrual periods which is common phenomenon to every teenage girl. This may result him to stress especially to those sexually active whereby it brings confusion and scare for early pregnancies. This results from the girl suffering from amenorrhea, which adversely affects her social life as a teenager.

Orthostatic hypotension is another result oriented by eating disorder that will adversely affect the social life of a teenage girl. This is sudden drop in blood pressure upon sitting up or long standing where she develops dizziness, headache and even blurred vision(Dept. of Health and Human Services (1999,2011).. This limits the girl from freely mingling in the public and social functions.

Children and teens with anorexia have a distorted body image since they view themselves as heavy, even when they are extremely skinny, are obsessed with being thin, and refuse to maintain a normal weight. Eating disorders in teenage girls can also lead to physical problems that are serious, this is a result of eating disorder and in the circumstance forced to induce vomit, and this causes callused fingers of the teenage girl due to repeated use of them to induce the vomiting. This can also lead to gum disease caused by stomach acids and enzymes brought by vomiting and hormonal imbalance.

Infertility caused by eating disorder is another factor which will affect the teenage girl socially; it is inability to have children caused by loss of menstrual cycle and hormonal imbalances, vitamin deficiency, malnutrition making it hard to maintain pregnancy (Raymond Lemberg, ‎Leigh Cohn, 2011). The eating disorder also increases chances of the babies to be born with defects affecting the newborn in his entire life.

To prevent eating disorder it is a way to promote healthy development among teenage girls society, it is achievable by early identification before it is too late to reduce the effects. They should be made aware of cultural images and dieting in their early teenage age and bring such issues to the light. This is by use of modern technologies to provide new prevention opportunities.

The Psychological and Social Effects of Eating Disorders on Teenage Girls. (2015, Dec 01). Retrieved from https://studymoose.com/the-psychological-and-social-effects-of-eating-disorders-on-teenage-girls-essay 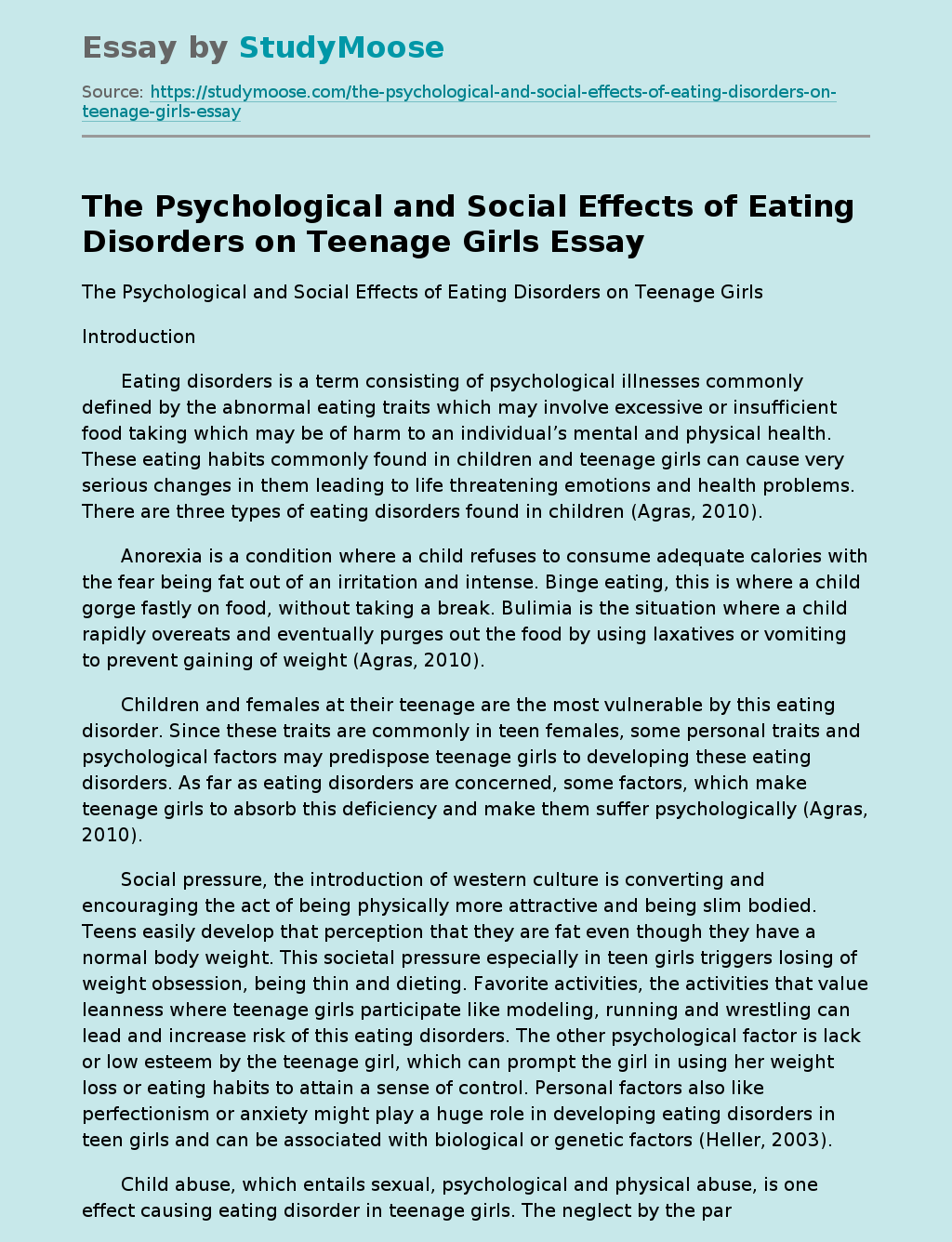