The Negative Effects of Teenage Dating

The biggest threat about teenage dating is their inability to maintain a relationship. Teenagers mostly, do not understand the necessity of sustaining a relationship over a period of time. Therefore, frequent break ups and arguments lead to attempts of suicide, teenage pregnancy, STD’s, teen violence, and substance abuse. This happens due to lack of experience and a broader understanding of what relationships are (Dasgupta, 2011). The problems of teen dating involving violence, sex, drug and alcohol abuse, and suicide are primarily caused by stressful life events, peer influence, and failure of parents to take their children away from harmful activities.

Don't use plagiarized sources. Get your custom essay on
“ The Negative Effects of Teenage Dating ”
Get custom paper
NEW! smart matching with writer

This makes them reduce a relationship to the concept of possessing a boyfriend or a girlfriend making them lose sight of what is important. This is why we have more cases of teenage dating than cases of everlasting friendship. Most teenagers lack the proper understanding of balancing friendship and dating causing even best friends to grow apart.

This also implies increasing isolation with their new found boyfriends or girlfriends making them further unavailable and unexposed to potential friends in their immediate circle (Dasgupta, 2011). Teenagers experience pressures every day. Not only are they undergoing unnerving biological changes, but they also are transitioning from childhood to adulthood. Dating teenagers experience even more pressure as they focus on building a relationship in the mist of all these changes (Armsden and Greenberg, 1987). Substance Abuse:

A link exists between teen dating and substance abuse, according to a 2004 study conducted by The National Center on Addiction and Substance Abuse at Columbia University.

Unhealthy relationships can start early and last a lifetime. Dating violence often starts with teasing and name calling. These behaviors are often thought to be a “normal” part of a relationship. But these behaviors can set the stage for more serious violence like physical assault and rape (Mack, 2010). What is dating violence?

Teen dating violence is defined as the physical, sexual, or psychological/emotional violence within a dating relationship, as well as stalking. It can occur in person or electronically and may occur between a current or former dating partner. You may have heard several different words used to describe teen dating violence. Here are just a few:

Adolescents and adults are often unaware that teens experience dating violence. In a nationwide survey, 9.4 percent of high school students report being hit, slapped, or physically hurt on purpose by their boyfriend or girlfriend in the 12 months prior to the survey (Centers for Disease Control and Prevention, 2011). About 1 in 5 women and nearly 1 in 7 men who never experienced rape, physical violence, and or stalking by an intimate partner, first experienced some form of partner violence between 11 and 17 years of age (Centers for Disease Control and Prevention, 2010). What are the consequences of dating violence?

As teens develop emotionally, they are heavily influenced by their relationship experiences. Healthy relationship behaviors can have a positive effect on teen’s emotional development. Unhealthy, abusive or violent relationships can cause short term and long term negative effects, or consequences to the developing teen. Victims of teen dating violence are more likely to do poorly in school, and report binge drinking, suicide attempts, and physical fighting. Victims may also carry the patterns of violence into future relationships (Violence prevention, 2011). Teen suicide after date violence or assault:

Elyse Olshen, M. D. of Columbia University Medical Center, New York, and other colleagues analyzed self-administered, anonymous questionnaires completed by 8, 080 students (age 14-18) from 87 New York City public high schools in 2010. The survey measured teen dating violence. 10.6 percent of the girls and 9.5 percent of the boys reported that they had experienced dating violence and 11.7 percent of adolescent girls and 7.2 percent of adolescent boys reported that they had attempted suicide one or more times (Nauert, 2010). Teen dating, Sex, and STD’s:

The majority of teenagers who date in the United States have had sexual intercourse by the time they finish high school. Data from a nationwide survey of high school students show that more than one-third of teenagers who date have had intercourse by the ninth grade and nearly two-thirds by the twelfth grade. Rates of engaging in oral sex are much higher than for sexual intercourse, with 20 to 30% of high school students and 18% of teens between the ages of 12 and 15 reporting that they had engaged in oral sex at least once (Halpern-Felsher, Cornell, Kropp, & Tschann, 2005).

46% of all high school students have not had sexual intercourse. By age 15, only 13% of teens have ever had sex. However, by the time they reach age 19, seven in 10 teens have engaged in sexual intercourse. Many teens are waiting longer to have sex than they did in the past. 9 out of 10 teens say it would be easier for them to avoid sexual activity if they were able to have more open conversations with their parents (Eaton PhD, 2010). . The majority (59%) of sexually experienced teen females had a first sexual partner who was 1-3 years their senior. . Overall, male high school students (49%) were more likely than female students (45.9%) to have had sex (Eaton PhD, 2010). STD’s are widespread among teenagers today, especially teenagers who date. A teen may not ask their parents about STD’s because of embarrassment, so parents need to take the initial step. Counsel your teen about the risks and causes of STD’s. Explain how the transition from one partner to another occurs through sexual activity (Armsden, & Greenberg, 2010). Statistics on STD’s:

Of the 18.9 million new cases of sexually transmitted infections each year, 9.1 million (48%) occur among teenagers. Teenage girls get infected with STD’s more easily than adults. Most teenagers who have an STD are not aware of it until they get tested (Eaton PhD, 2010). Statistics on pregnancy:

1 in 3 girls in the U.S. are estimated to get pregnant before they are twenty. Teen mothers are now more likely than in the past to complete high school or obtain a GED, but they are still less likely than women who delay childbearing to go on to college. Of girls who first have sex before age 15, almost half of them will get pregnant. 82% of teen pregnancies are unplanned; they account for about 1 in 5 of all unintended pregnancies annually In order to reduce the high rates of teen pregnancy and sexually transmitted disease (STD) in the United States, it is important to address two primary questions: What factors influence teenager’s decisions about sex? Which of these factors can be altered?

By identifying and targeting those factors that both affect teenager’s decisions about sex and can be changed by interventions, organizations can greatly increase their chances of reducing sexual risk-taking. I chose the topic of teenage dating because in the field of human services, some teens may be diagnosed with a problem that may be related to teen dating. After gathering the information on this topic, I have come to realize that teenage dating has the potential to pose many problems for a teen if he or she is not correctly monitored by their parents.

Why Dating in Early Ages Isn’t a Good Idea?

When you walk in a hallway in your school and see a person that crushes your heart, you wish that you can speak to that person or interact with him/her. But things happen to quickly, as you have to go to your class. The thoughts of the person of your dreams stay in your mind, throughout the whole day and you still want to do something about your person you wish to talk to.

Dating in your early age is a lot worse than it looks. It will cause you to want to turn back when you’re in the middle of it, but you’ll realise that it’s too late. Being an obvious fact, dating in an early age would disrupt your learning. Scientists have proved that it interrupts your thinking, since the thoughts of having to spend time with your true love would be your first priority. Of course, academics are very important to your life, as it would help you get jobs. But if your mind was focusing on love and dating during your early age, you wouldn’t be successful to get a job. Students become influenced to start a relationship when they see another couple. It is identical to peer pressure, so students get to “show off” or brag about their partner to their friends.

Two facts about dating during early age are; One in four adolescents report verbal, physical, emotional and sexual abuse every year. The majority of teen dating abuse occurs in the home of their partner.

Almost every teen thinks whether they should start dating a lot. Brett Ullman, premiere speaker in Canada or Christianity gave a presentation to elementary students. Brett Ullman told the students that a majority of relationships that take place during elementary school or early high school end up failing, or breaking apart. The reason? Because children and teens at young ages aren’t prepared for dating, due to their maturity and responsibility. Many students think that dating is just a game, where there is actually just a small chance where they can be successful in their relationship.

Should we date in such an early age, is one’s choice. But many teens fall into the obvious trap that would ruin their reputation in school, or in life. Failing can be very light for one person, where they can easily move on to their objective in life. But for the other, experiencing a broken relationship can lead to self harm, depression or suicide.

Dating during preteens or just a little other than preteens is most likely a bad idea. Dating isn’t something that one can easily handle or live through. When you see someone that you wish to date with, forget about it, and only think of that person as a friend.

The Negative Effects of Teenage Dating. (2016, Dec 11). Retrieved from http://studymoose.com/the-negative-effects-of-teenage-dating-essay 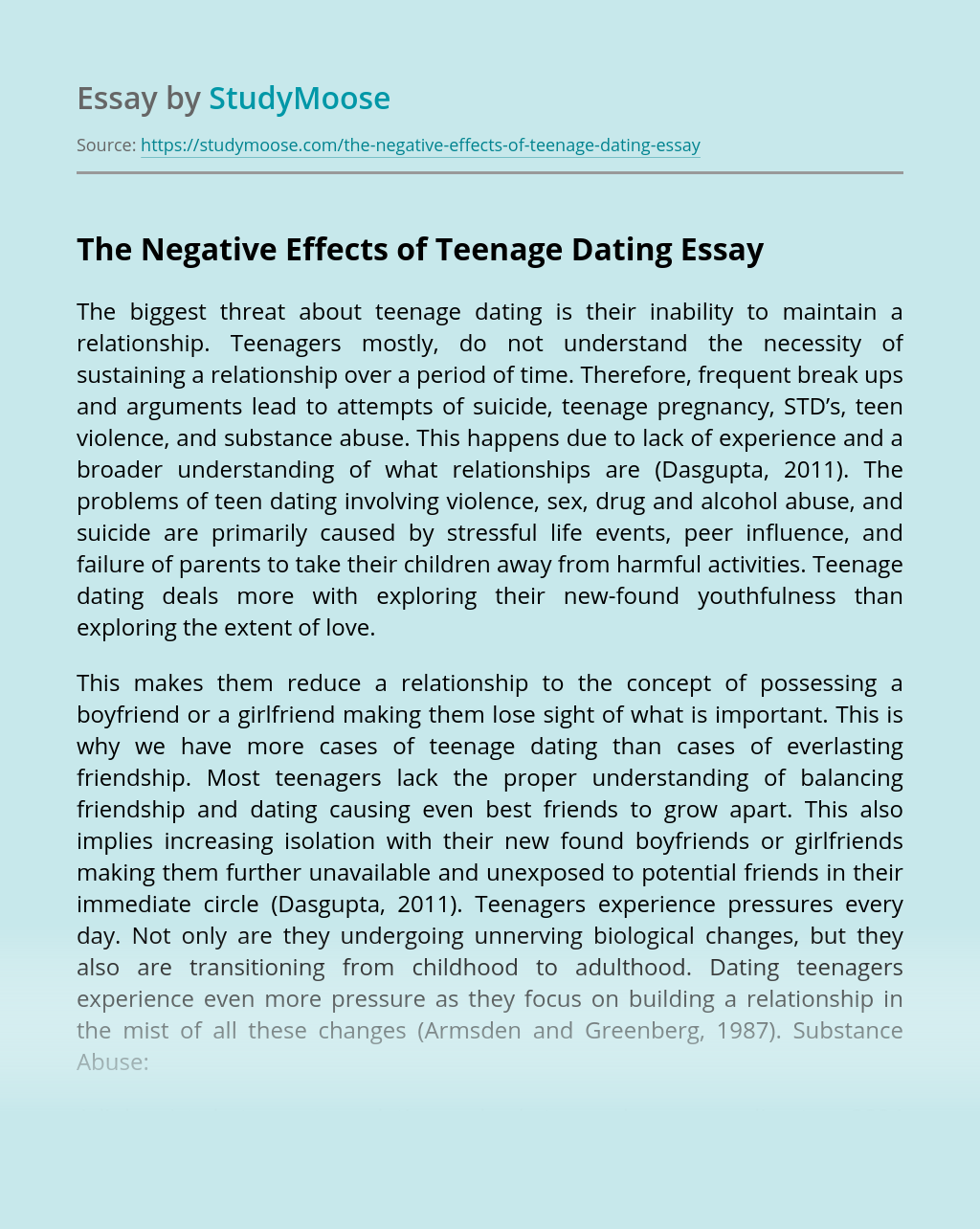