What Are the Effects of High School Students Having a Boyfriend or Girlfriend?

Puppy love and childhood crushes turn to teenage dating activities for at least half of all high school students. With the onset of adolescence, teens spend less time with family and more time with peers. In the early teen years, mixed-gender groups predominate. By mid-teens, up to two-thirds of high school students report they have dated or are in a romantic relationship. Having a boyfriend or girlfriend in high school can have significant effects on a teenager’s social development and personal identity.

Turn in your highest-quality paper
Get a qualified writer to help you with
“ What Are the Effects of High School Students Having a Boyfriend or Girlfriend? ”
Get high-quality paper
NEW! AI matching with writer

Healthy Relationships
Characteristics of healthy teen-dating relationships are open communication and trust between partners of nearly the same age, says Sarah Sorenson in “Adolescent Romantic Relationships,” published online by ACT for Youth Center of Excellence. Experts disagree on the impact of having a boyfriend or girlfriend in high school, with some experts expressing concern for the need for personal identity before becoming involved in a dating relationship, while others believe that teen dating is an important part of the process of establishing self-identity.

Benefits of dating while in high school include development of social skills, interdependence, cooperation, empathy and sensitivity.

see more:effects of having a relationship while studying

Dating Age
Although many negative effects of dating during the pre-teen and early adolescent years are noted — poor academic performance, low educational aspirations, delinquency, enduring poor social skills, sexual activity, depression and drug use, having a boyfriend or girlfriend during the high school years seems to have a more positive effect. With greater emotional development and social skills, dating in later teen years can facilitate the development of personal identity and coping skills.

Parental Influence
Violence among teen dating partners has garnered national attention and has been called a public health problem that leads to adverse health outcomes. In “Teens and Dating: Tips for Parents and Professionals,” Kate Fogarty says
teens who feel warmth and support from parents experience more positive and secure friendships. Fogarty further reports that teen girls who have strong relationships with their mothers and who are not involved in steady dating have higher academic achievement than girls in romantic relationships. Parents can help their teenagers avoid negative dating experiences by keeping communication open in a warm and supportive relationship.

Abstinence
Teenage students who are abstinent from sexual activity have higher academic achievement, according to Robert Rector and Kirk A. Johnson in “Teenage Sexual Abstinence and Achievement.” Statistics indicate that abstinent students are 60 percent less likely to be expelled from school, 50 percent more likely to graduate and twice as likely to complete college. However, it is not necessarily the sexual abstinence that gets the credit for the greater academic performance. It may be that the characteristics of the student who abstains are the same characteristics that help the student succeed academically — impulse control, perseverance, ability to resist peer pressure and more respect for parental and societal norms.

What Are the Effects of High School Students Having a Boyfriend or Girlfriend?. (2016, Apr 02). Retrieved from https://studymoose.com/what-are-the-effects-of-high-school-students-having-a-boyfriend-or-girlfriend-essay 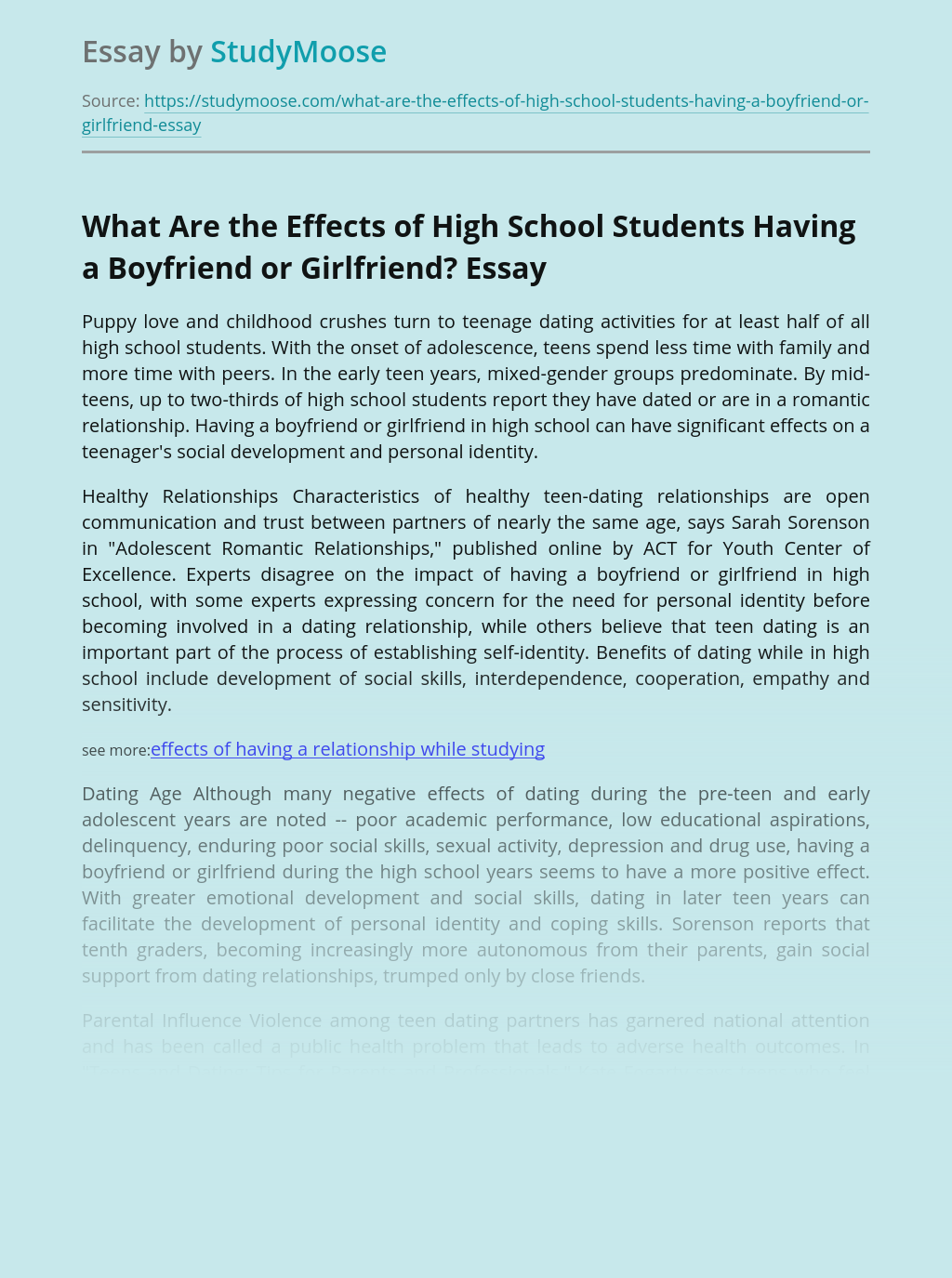 Turn in your highest-quality paper
Get a qualified writer to help you with
“ What Are the Effects of High School Students Having a Boyfriend or Girlfriend? ”
Get high-quality paper
Helping students since 2015
Stay Safe, Stay Original