Higher education is an important goal for many. This is made evident by the large number of people working for their undergraduate degrees: there were twenty-one million students enrolled in post-secondary education institutions in the United States in 2010 (U.S. Department of Education). The value of higher education is well known, as the statistics about how a degree can improve employment opportunities and increase earnings are often cited. According to a survey done by the College Board in 2010, those with a bachelor’s degree earn 66% more over a forty-year career than those with only a high school diploma (Supiano, 2010).

The same study also reported that the unemployment rate for those with an undergraduate degree was significantly lower than for those without one. All of these things provide evidence to the commonly held belief that higher education is of high value to those who attain it.

While the value of higher education is not often disputed, the value it holds for individual students could be.

There are some students who put a huge amount of effort into their studies and graduate with exceptional academic status. There are others, however, who do not focus on their studies and only put in the minimal amount of effort necessary to pass their classes and earn their degree. Although some may not see this as a problem, those students who do well in college are likely to benefit substantially from their good performance, and those who do not may experience difficulty in the job search process.

Hiring managers for entry-level positions are looking more closely at grade point averages (GPA) in this challenging economic climate than in the past. Forced to choose between dozens or even hundreds of applicants, GPA is sometimes used to help in whittling down the applicant pool. One survey found that 73% of companies screen applications based on GPA (Koc, 2011). One human resources professional called it the best way to predict job performance for the first years of employment, and a good example of work ethic (Koeppel, 2006). Most companies that look at GPA will not consider candidates with less than a 3.0, and more competitive companies may have even higher expectations (Koc, 2011). Therefore academic performance certainly is important, and good performance is extremely helpful throughout a graduate’s life. The question becomes what influences students to act the way they do in their academic careers; what is the difference between a student with a perfect grade point average and another student with a less than stellar one?

The value a degree has for a person is substantial, but there are a variety of factors that influence the quality of the education that a student actually earns. This is an especially significant point when the high level of investment that students put into their education is taken into consideration. They often spend four years of their lives or more working for their education and put forth a huge amount of effort. Students and their families are also responsible for paying thousands upon thousands of dollars to attend their college or university of choice. Therefore they surely want to get the most out of their time in college and receive a quality education.

One way to measure the quality of an education earned for a particular student is to examine their academic performance, particularly in terms of their GPA. While some may say it is not really important, Poropat (2009) argues that GPA is the best criterion to measure academic performance. He mentions that GPA has strong internal reliability, and also correlates well with other variables such as work performance and occupational status, and prestige. According to the statistics cited earlier, hiring managers agree that it can be a good predictor of work performance. The goal of education is to help students meet their academic and professional goals, so the fact that GPA correlates with work factors is promising. It suggests that getting a good education and performing well academically will lead to better work status and career, which is important and encouraging for students investing a great deal of money, time, and effort into their education.

Capacity to perform also includes a student’s knowledge and skills. Knowledge of a subject is going to vary between students, making a student better at the material in certain classes than others. That is not a very well studied area, as it would have to be examined on a case by case basis. Ability, however, could be related to learning style. Having the ability to learn new material and perform well on tests of that material is going to improve a student’s academic performance. Biggs (1987) named three main types of learning styles: deep, achieving, and surface. Chamorro and Furnham (2008) discovered that students with deep and achieving learning styles performed best. Deep Learners are more intrinsically motivated to learn more about the subject which they are studying and spend a lot of time reading about it and relating it back to other content they have learned. Achieving learners are trying to increase their self-esteem by doing better than their competition, and they focus on getting the highest grades, no matter what the subject.

One of the factors that affect willingness to perform is a student’s cultural norms. Many studies that look into the relationship between culture and academic performance compare vastly different cultures, such as Asian, Eastern, and Western cultures. Part of this is due to the phenomenon observed that Asian students in Eastern and Western countries are stereotypically high achievers. As evidence to this, Kao (1995) found that academic performance was valued more highly by students of Asian descent than those who were Caucasian. Numerous other studies also found evidence that suggested Asian students feel more driven to succeed academically and found a variety of reasons explaining why (Stankov, 2010; Lan, Legare, Ponitz, Li & Morrison, 2011; Hau & Salili, 1996). Therefore, culture can certainly have an important impact on a student’s academic performance. 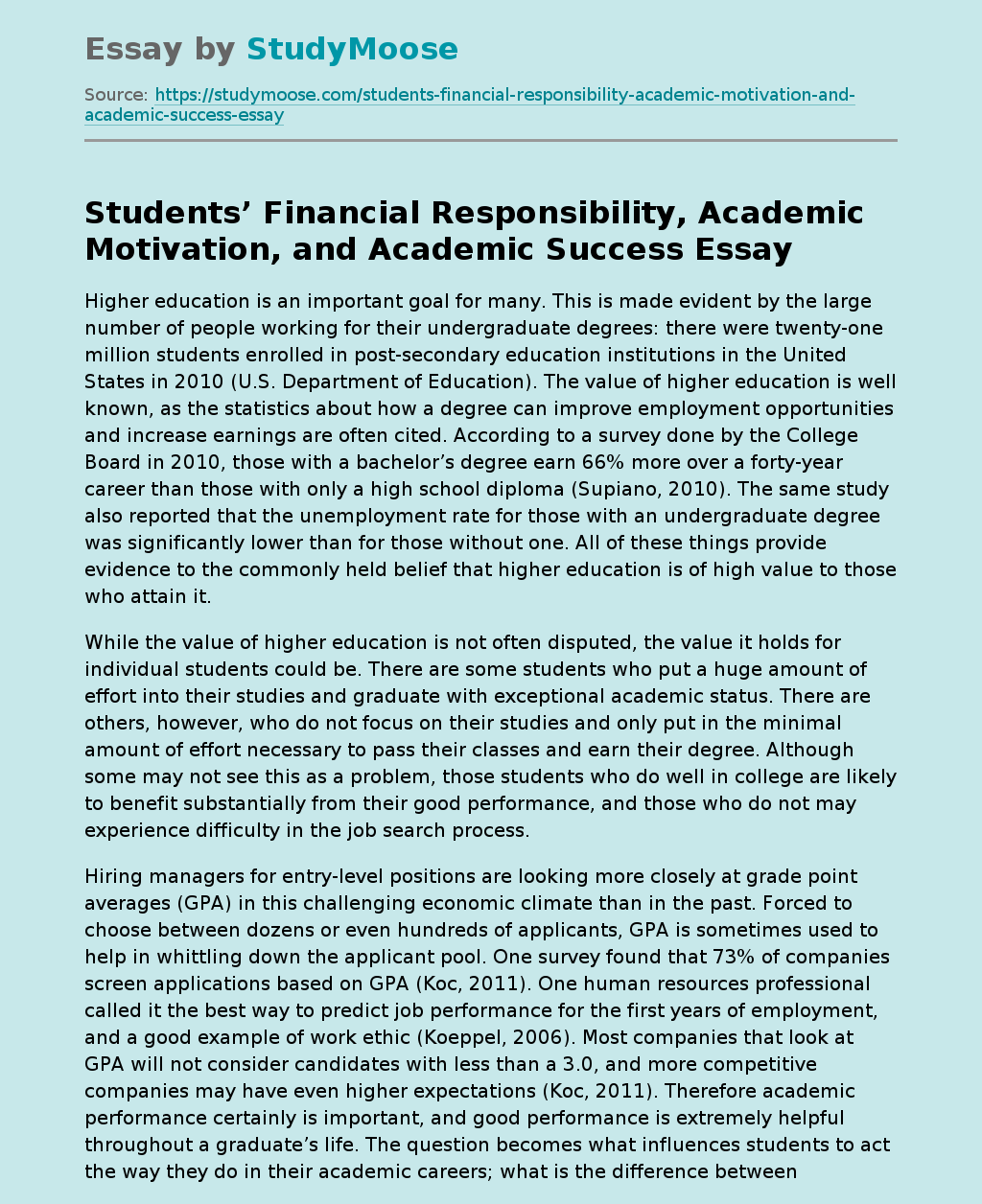