Vice is a practice or a behavior or habit considered immoral, depraved, or degrading in the associated society. In more minor usage, vice can refer to a fault, a negative character trait, a defect, an infirmity, or merely a bad habit). Vices are habits and activities that are not beneficial to an individual. It usually produces negative consequences- in the physical, emotional, mental and social aspect of a person. The generation today is facing a great ideal of vices like drug addiction, smoking, computer games, social networking, gambling, pre- marital sex, pornography and drinking which has become more accessible to the public.

Don't use plagiarized sources. Get your custom essay on
“ Vices Intoduction ”
Get custom paper
NEW! smart matching with writer

It would suggest that vices are common among these people because of the age proper and the independence from parents.3Vices may inhibit the productivity and further effectiveness of a student, since they take time, concentration and financial resources. 4 Vices that the researchers would want to tackle are alcoholism, smoking , computer games and gambling because these vices are the most common and prevalent among the MMC – CAST students.

Alcohol dependence, or alcoholism, is a long-term physical condition characterized by compulsive drinking, which a person is unable to control ( Grand et. al.., 2004)

College is a prime time and place for drinking. Although frequent drinking is common at this age,college students tend to drink more frequently and more heavy than their non

collegiate peers (SAMHSA,2004b) Alcohol alters the brain’s chemistry and increases the risk of depression, thus their is a possibility that may affect a students focus in his studies.

Another vice that is also rampant among them is smoking. In view of the known risks, why do so many people smoke? For one thing smoking is

Experienced smokers say they are more influenced by their cravings and need,are emotionally attached to something, or believe that smoking enhances mental activity (Piperet.al,2004)

Computer games are the most popular form of fiction consumed through the computer, if by fiction one understands artifacts intended to delight rather than

to inform. Consumptions of computer games far surpasses that of electronic texts or works of hypertext fiction (Galore et al 2002) It is testifies to the trend

today, that most adolescents and young adults have become more fond of playing computer games, because of the enhancement of the graphics, the

games themselves and one reason is that of socialization.

The last vice the researchers want to address to is gambling. Gambling is the wagering of money or something of material value

material goods. Nowadays, college students have found different places where they can gamble,; such as betting in computer

gaming, sports and other forms of gaming that are “in” in this generation.

Time, commodities, health and education are affected by these vices, thus it gives us an interest in finding out whether these activities can impinge on

motivation and performance in school. Academic success and perseverance in attaining high grades is crucial in students because it will be beneficial for the years to come. It would be a favorable result if the student will continue to pursue excellence to such. However, this thesis would like to
find out whether the outcome would decrease or increase the students conduct in their studies.

The focus of this research is to resolve if vices can affect the motivation and participation of students in classes and in school academic activities. The researchers have come up to derive four different types of vices that are prevalent nowadays. 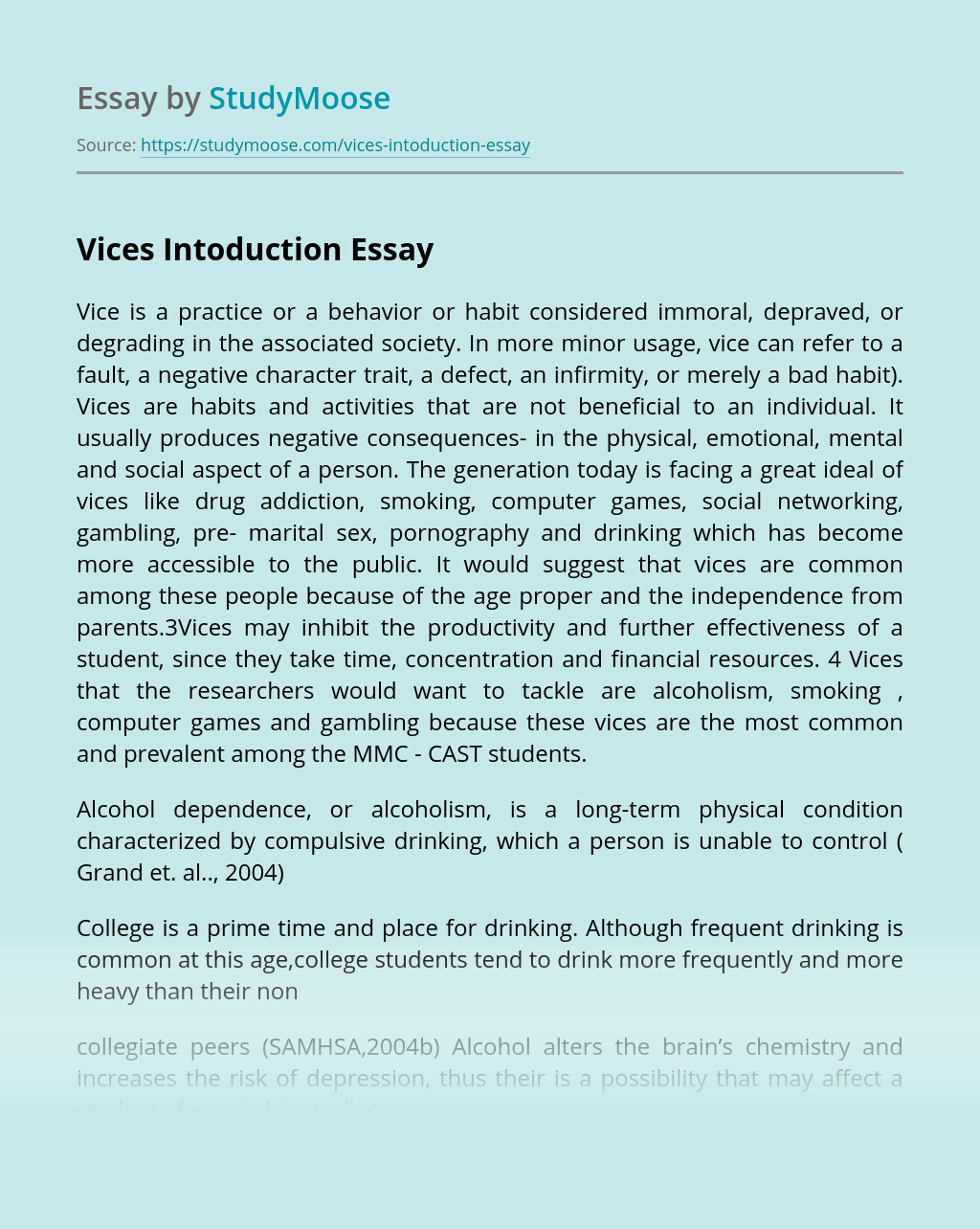