Most of the parents don’t know when their children have the right age to start dating. I t appears that kids are rushing to experience everything in society much earlier these days. One of Those activities that children are experiencing at an earlier age is dating. There are number of views on that ideal age for a teen to start dating, but no one has come to agree on an exact age to do it. I n the past many kids didn’t start dating until high school.

Don't use plagiarized sources.
Get Your Custom Essay on The Appropiate Age for Dating Just from $13,9/Page

Now it has become more common that kids start dealing with these problems as early at fifth grade.

I personally believe that parents should make the decision of when they are going to let their child start dating, based upon their personal beliefs and understanding of their teen’s emotional and physical development. Even though there is some agreement as to what is too early, there is no universal right age. However involvement in a serious romantic relationship in early teen years can create problems.

There is a research that demostrates that children of ages ten to twelve who begin dating, start to concentrate less in school grades. Just because most of the children are dating at an early age doesn’t mean it’s a good thing. Once kids start dating, their mind is quiet often more concerned with their relationship than other activities they should be thinking about.

I think a teen first needs to form an identity and know who he or she is, before they start dating. Many young teens are still defining themselves and they don’t know themselves well enough to share who they are with someone else. Teens should have the enough maturity to deal with all these problems. If they are not mature enough, they would not know how to react in these situations, and they could have negative consequences in their lives and social environment. Another factor is that teens might be influenced by peer pressure. When other kids of their same age start dating, they begin getting doubts of why they can’t do the same, and they might end up by doing it.

Finally, there is no ideal age for teens to start dating. It all depends on the maturity of the children and of the person they are dating. If parents feel their kids are prepared enough and know how to deal with all these issues, then they might let them start getting involved in romantic
relationships. If teens start dating in a good period of their lives, they could have a good relationship. Until teens reach a certain age they should realize that their dates might be supervised by adults. They should also be emotionally prepared to end with a relationship that is no good for them.

The Appropiate Age for Dating. (2016, Mar 23). Retrieved from https://studymoose.com/the-appropiate-age-for-dating-essay 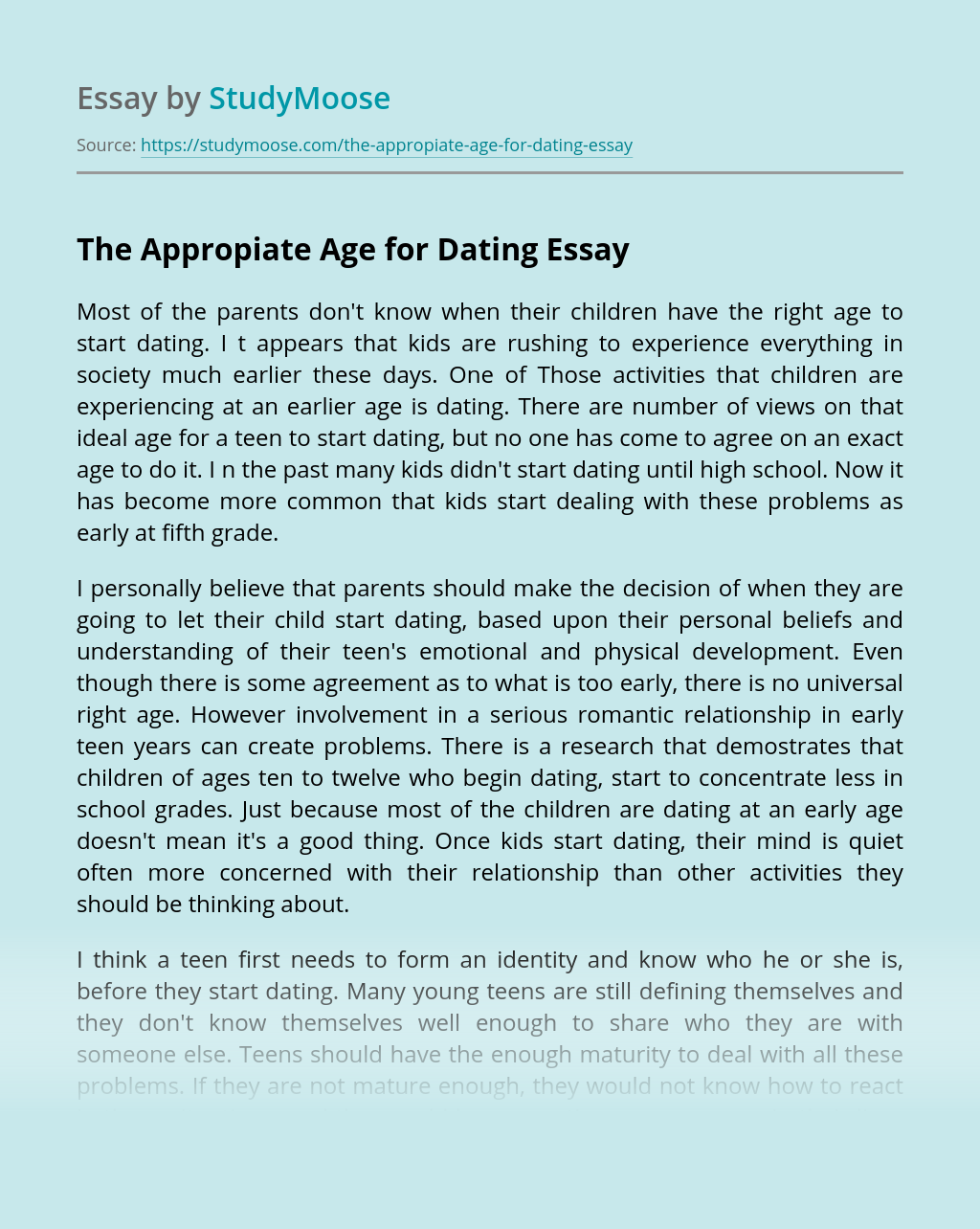 In the short story “Girl” by Jamaica Kincaid the author gives a perspective of the relationship between a strict mother and her young daughter. Jamaica Kincaid wrote series of sentences that sets the tone of the story to be uptight, oppressive, and informative. The author described her daughter into becoming a ‘slut’ which tells the...

The problem and its background 1.1 Introduction A peer group is both a social group and a primary group of people. It may be defined as a group of people who share similarities such as age, background, and social status. The members of this group are likely to influence the person’s beliefs and behavior. Also,...

The film “The Black Balloon”, is a 2008 Australian AFI award-winning dramatic feature film that stars Toni Collette, Rhys Wakefield, Luke Ford, Erik Thomson, Gemma Ward; as well as a cast of newcomers. It is directed by first-time feature film director, Elissa Down, Despite being set in the early 1990’s, the movie, “The Black Balloon”...

Leon Botstein’s “Let Teenagers Try Adulthood” talks about how high schools are obsolete and why they should be abolished. He feels that schools are run like a popularity contest and that high school is a waste of time. Botstein goes on to say that how well a school does in teams sports is how well...

Adolescence, likewise understood as “teenage years” is a time of significant modification. This phase of life marks a developmental period that follows childhood and comes prior to adulthood. Teenage years is closely associated with puberty, which is also considered as a developmental turning point, especially in the western nations. The age of puberty describes the...