When a new driver gets behind the wheel, how do you know they are old enough? Do you consider their maturity level and ability to comprehend an emergency situation or do you just assume at the age of 16 they are ready to start driving? This has been a concern for many years now and is still being questioned to this day. Teen driving has many fatal results but they differ in age groups. Some people are worried 16 is too young for a teen to be driving and believe the legal driving age should be raised to 18.

Turn in your highest-quality paper
Get a qualified writer to help you with
“ Teen Driving: Safe At 16 ”
Get high-quality paper
NEW! AI matching with writer

The article “Teen Driver Restrictions a Mixed Bag” by Shari Roan discusses the results of study on teen drivers of different ages.

Many states across the United States have set restrictions on young teen drivers, thinking this will help keep the number of fatal car accidents down but now after nationwide research, experts seem to believe this has backfired. “While the number of fatal crashes among 16- and 17-year-old drivers has fallen, deadly accidents among 18-to 19-year-olds have risen by an almost equal amount.

” This may be true but even then experts are not completely sure why; they believe it is caused by immaturity and inexperience that makes a young teen more vulnerable to a vehicle accident.

Though many teens vary in their maturity level at the age of 16, some may be ready to drive and some may not be. Car accidents can happen to anyone at any age but they “are the leading cause of death among teens, resulting in 4,054 fatalities in 2008, according to the Insurance Institute for Highway Safety in Arlington, Va.

” Most states have graduated driver licensing programs which don’t allow young drivers to take certain higher-risk situations such as driving on the road at night, the use of cell phones while driving and driving with passengers.

These programs were first tested out in the late 1990s and continue to be put to use today. Each state varies in their rules for the programs but the majority of them have the same requirements for allowing a young teenager to receive their driver’s permit. Later on, researchers discovered states that have the most restrictive graduated licensing programs “saw a 26% reduction in the rate of fatal crashes involving 16-year-old drivers compared with states without any restrictions. But the rate of fatal crashes among 18-year-old drivers in those states jumped 12% compared with the states without restrictions.

These restrictions included late night driving and supervised driving times and many more. They also affected road safety laws such as the seat belt laws. The researchers then compared the strong graduated licensing programs to weak graduated licensing programs and realized “the rate of fatal crashes among 16-year-old drivers was 16% lower but was 10% higher among 18-year-old drivers. ” The thoughts behind this were because the young teens waiting until they were 18 years old to receive their license so they could bypass all the restrictions.

Even though they may be able to bypass the restrictions if they wait until they are 18, once they start driving they are still just as inexperienced as a 16-year-old driver. Their inexperience at 18 is causing the percentages to rise, which isn’t helping with the rate of fatal car accidents. Some of these facts are very arguable and some many may agree on but in “Teen Driving – Should the Driving Age be Raised? ” by William Triplett, he has other arguments he would like to share. Teen drivers between the ages of 16 and 19 have the highest fatal and non-fatal crash rates in the country, but 16-year-olds are three times more likely to be involved in a crash than 19-year-olds. ” This is something most people just assume–new drivers will be at a higher risk of an accident than those who have a few years under their belt. “Every decade, more than 9,000 16-year-olds die in motor vehicle accidents in the United States. ” It’s very scary to think about but it is very true. Safety experts are worried and want to blame the states for giving 16-year-olds the right to drive.

They believe it is too soon for someone to operate a motor vehicle. There are many factors behind their reasoning. One factor is that young teens are too “emotionally and psychologically immature” to be put behind the wheel along with the other challenges they may face. These challenges include being able to make a split second decision to avoid an accident or not being distracted by call phone use, friends, or music. Susan Scharoun, the chairman of the psychology department at Le Moyne College in Syracuse, N. Y. , believes “that biological factors influence teenage behavior, particularly when risk-taking is involved. As a new driver, there can be many fast acting decisions one may make and some may not be mentally ready for those actions. Researchers are now discovering that the “hormonal activity and incomplete development of the frontal lobe of the brain, which controls reasoning and memory, affect teen risk-taking behavior. ” This can mean making a life or death choice on the spot and knowing what would be best at the time. Due to all the incomplete development plus the inexperience of driving helps explain why teens have the highest percentage of single-vehicle crashes.

It also involves “speeding and driver error, as well as the highest vehicle-occupancy rates, according to the IIHS” (Insurance Institute for Highway Safety). America has the youngest age for new drivers but has the highest crash rates of teenagers. Parents also play a huge role in the decision for the driving age to be raised. Many parents enjoy their kids being able to drive at 16 because they can now drive themselves to a practice or to and from home. Parents believe it will be more helpful in the long run but they know that it is also extremely dangerous for kids to be driving.

Then teens of course believe 16 is a great age because most kids wants to be able to drive. However, there has been research on video games having an affect on teen driving; are the violent reckless driving video games teaching kids the wrong driving lessons? Some say the video games have no affect on the kids because most everyone knows they aren’t real. But there haven’t been any definitive studies to back up these claims. Professionals are always trying to come up with new ways of teaching kids how to drive properly since politically nothing ever seems to change on this issue.

Overall, there are many facts and figures to be considered whether or not the driving age should stay at 16 or if it should be raised to 18. I do believe in the first article Roan is trying to persuade the reader to keep the driving age at 16 because no matter what age the driver is there will always be fatal car accidents and driving at 16 will be more convenient for families. On the other hand, Triplett is trying to persuade the reader to think we need to raise the driving age to 18 because it will be less dangerous once they develop more into a young adult.

I think the driving age should stay at 16 because of all the reasons Roan talked about and overall it is more helpful to families of 16 year olds. At 16 you can drive yourself to practice, a friend’s house, school and even work. Many work places start to hire at the age of 15 or 16 so it is more convenient for the teen to be able to drive themselves to work instead of waiting for their parents. Parents should just make sure they think their child is responsible enough to get behind of a motor vehicle and every parent should be able to figure if their 16 year old is mature enough and ready to drive. 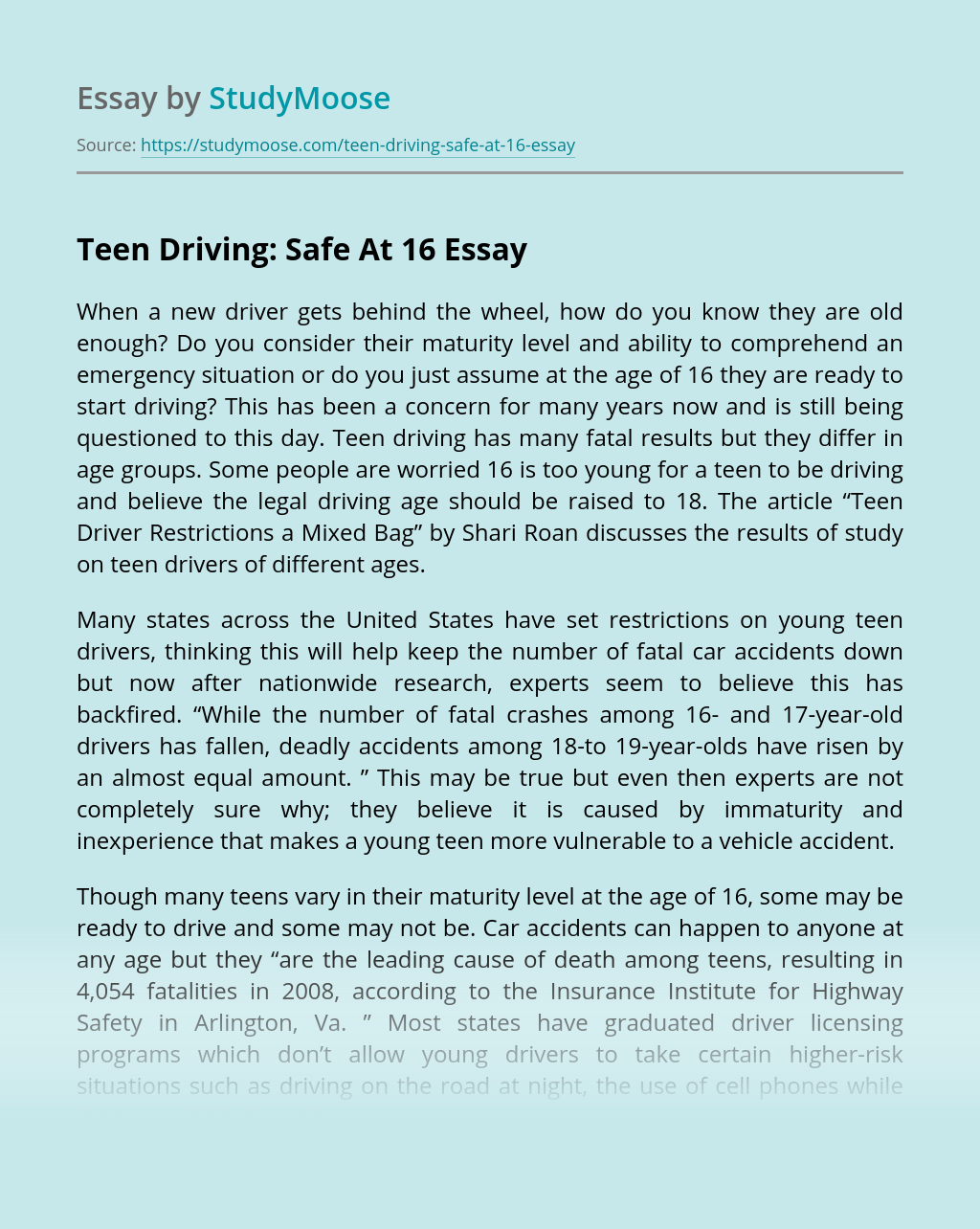 Turn in your highest-quality paper
Get a qualified writer to help you with
“ Teen Driving: Safe At 16 ”
Get high-quality paper
Helping students since 2015
Stay Safe, Stay Original