“In 2010, approximately 2,700 teens in the United States between the ages of 16-19 were involved in fatal car accidents and almost 282,000 of these teens suffered injuries in car accidents. ” (Centers for Disease Control and Prevention, n. d. ). Given this information, this proves that car accidents have become the leading cause of death in teens in the United States. “The risk of being involved in a car crash is highest during the first 12 to 24 months of receiving a drivers’ license. ” (Becerra, 2012). There are many aspects that put teen drivers’ at risk.

Don't use plagiarized sources.
Get Your Custom Essay on Teen Driving Safety Just from $13,9/Page

Inexperience and poor judgment are huge factors and obvious reasons new drivers’ are more likely to be involved in an accident. With that being said, teens tend to underestimate unsafe situations. Speeding is another major factor that puts teen drivers’ at risk. In addition to speeding, the presence of other teen passengers in the car also increases the risks of distractions associated to risky driving. Teens are more likely to behave in a risky manner when accompanied by other teenagers.

Some teens feel peer pressured into acting in such daring ways. Other factors include the lack of wearing seat belts and driving at night time.

Almost 60% of all fatal crashes involving teens happen between 9 p. m. and midnight. ” (Hoffman, 2010). Driving during night time hours is more hazardous, teens driving at night are four times more likely to be involved in a fatal car accident because it is harder to see and reaction times can be delayed due to the issue of not being able to see as well. The National Highway Traffic Safety Administration introduced a graduated driver licensing (GDL) system to help prevent and reduce accidents from happening. The GDL system was designed to teach first time drivers’ at a progressive and steady pace.

The graduated driver licensing system is broken down into three separate stages. Stage one is the Learners Permit stage and includes the driver to be at least sixteen years of age, completion of basic driver training, thirty to fifty completed practice hours with an adult, and that the driver not be involved in any car accidents or convictions for at least six months to be able to advance onto stage two of the GDL system. Stage two is the Intermediate (Provisional) License meaning that the driver has completed stage one and the road test successfully and has also reached the age of at least sixteen and a half.

This stage covers important information about safe driving decision making and risk education. Night time driving is also restricted in this stage unless under the supervision of an adult twenty one years or older, with the exception of driving to and from work. In order to be able to drive for work purposes the teen driver must go to the local DMV to get permission for work release. Teen age passengers are limited to only one passenger for the first twelve months, and the driver must remain free of any convictions and accidents for at least twelve months in order to be able to move forward to stage three of the system.

The third and final stage is Full Licensure. This means the driver has successfully completed stages one and two, is at least eighteen years of age to be able to have passengers, and drive during night time hours. Currently there are only forty six states and the District of Columbia that use the three stage GDL system. Arkansas, Kansas, Minnesota, and North Dakota follow a two stage GDL system that does not include the second stage. Currently none of these states use a GDL system with all of the suggested guidelines and limitations.

If all fifty states were to adopt the use of the GDL system including all three stages and recommended guidelines there would be an even greater reduction in the amount of car accidents and fatalities. Continuous research proves that the GDL system is effective in improving teens driving skills and also reducing the amount of accidents and fatalities. “Analysis shows that adopting GDL laws will lead to substantial decreases of crashes for this age group – anywhere between 20 and 50 percent. ” (National Highway Traffic Safety Administration, 2013).

As of today, there has been no law making it mandatory for all new drivers to have a vehicle monitoring device installed in their car. These monitoring devices can monitor and record the use of seat belts by drivers’ and passengers, speed, severe braking, fast acceleration, and even if a curve in the road is being taken too sharply. They also have a camera so that everything going on in the car can be recorded and reviewed. Parents would be able to keep track of what their teen drivers are doing when they aren’t actually able to be in the car with them.

These monitoring devices would also be programmed to report to the local DMV. The DMV would receive all reports through a computerized system, this way actions can be taken when teens are abusing these laws. If teen driving reports show that any of these laws are being broken, such as speeding or not wearing their seat belt, the driver will be fined, along with receiving points on their license. After the first offense, each time a driver breaks any more laws they will be fined twice as much as the first time with points added on as well.

If continuous risky driving is reported to the DMV the driver will then lose their driving privileges for a matter of time. By having these monitoring devices installed teen drivers are more likely think more cautiously when driving. For instance, some teens will want to drive safe and take precautions because they know they are being monitored and will be punished if they are caught driving dangerously. If having monitoring devices installed into all cars at the time of receiving a drivers’ license became a requirement, it would significantly reduce the amount of car accidents and fatalities.

This would be a simple and convenient way for parents to keep track of their teens driving and for teens to behave responsibly while driving alone. The use of these devices is extremely beneficial in giving teens the freedom they deserve while still being able to ensure their driving is safe. If all fifty states were to inherit the three stage GDL system and all new drivers’ were required to have a monitoring system in their car, teen drivers would be getting the necessary experience they need while the number of accidents and fatalities drop even more. 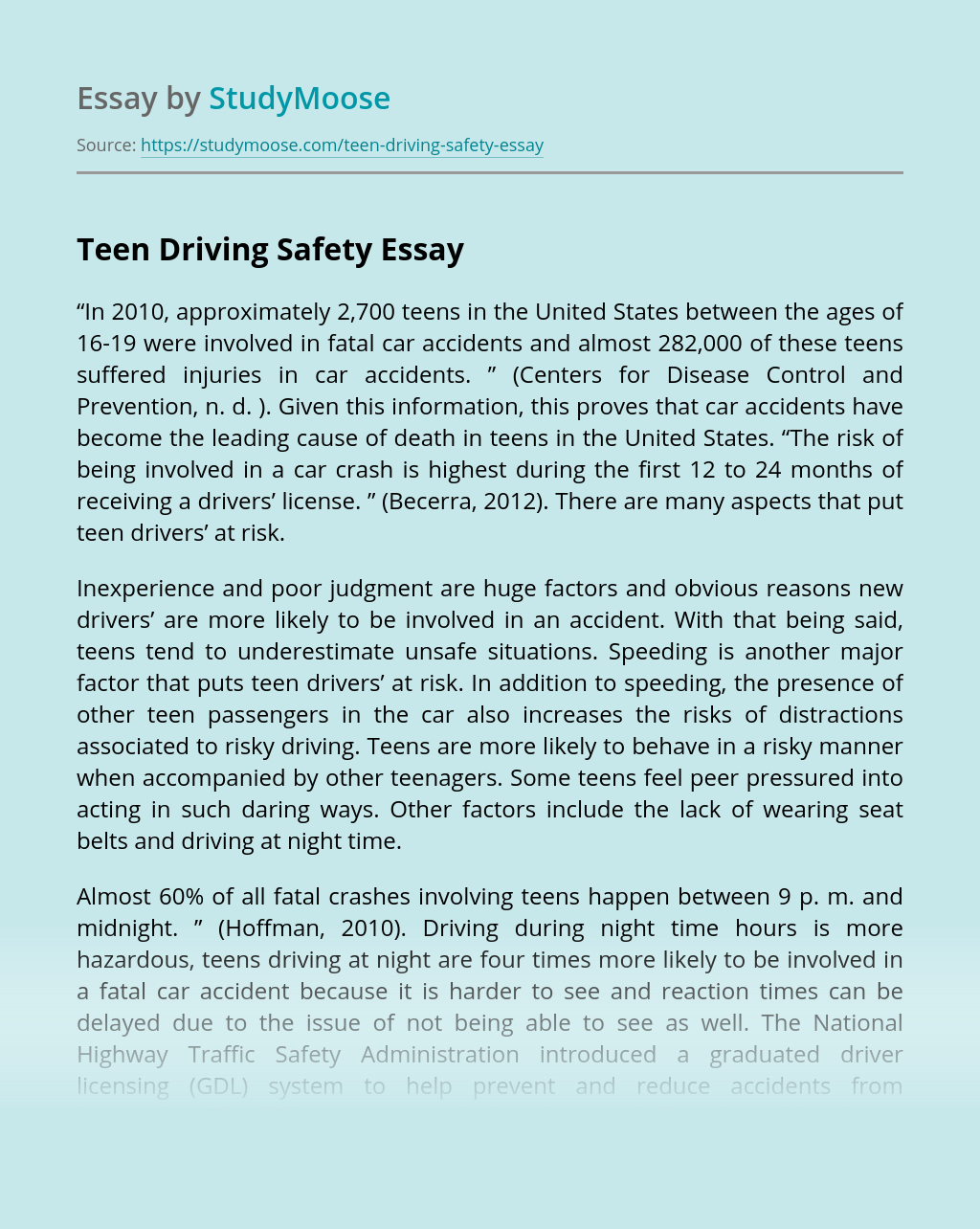 Road accidents have been and will continue to be one of the greatest health hazards. Statistically, it has been shown that the number of death and injuries due to road accidents. It has been increasing steadily. Why these road accidents, occurring in our daily routines? Is they forgot road safety rules? There are many causes... VIEW ESSAY

There was always one major thought, the goal, a simple dream that made twinges of excitement flow through my body. The waiting was incredible, and it always seemed forever and a day before it would come true. This is a typical pre-teen, adolescent dream, yet it was as important to me as the sun rising.... VIEW ESSAY

View sample
Get Essay
Driving In Summer and In Winter

Drunk driving is a primary cause of highway traffic accidents causing deaths and injuries with enormous monetary costs to society. The drunk driving was first recognized as a policy problem in the literature in 1904, approximately 5 years after the first highway traffic fatality in the United States (Voas and Lacey). In 1982, the National... VIEW ESSAY