In the event of a car collision, there are already a few measures taken ahead of time for the passengers’ safety: equipment such as seat belts, crumple zones, airbags, and more. Yet, the reasoning behind these precautions relates to physics on a basic level. These familiar concepts are that of momentum, impulse, and kinetic and thermal energy. These relate to the reasons that cars are so dangerous, but thanks to advancements in technology in the past century, there are now cars developed to be less risky with the aforementioned devices.

Don't use plagiarized sources. Get your custom essay on
“ Car Safety Features – Safety on the Road ”
Get custom paper
NEW! smart matching with writer

The physical purpose of safety equipment during car collisions directly correlates to the laws of physics, such as concepts of impulse, momentum, and kinetic energy.

Seatbelts remain a significant component of safety in any form of a car collision. When moving at high speeds in a massive vehicle, any crash can be fatal and severe – even something as simple as being rear-ended. Seatbelts are important in all crashes because they can prevent you from hitting the dashboard or windshield.

They will keep you in the car and act as a cushion in the event of an accident. When a car suddenly stops during a crash, there is no force acting on you to keep you from flying out of the car because of Newton’s first law of inertia: objects in motion will stay in motion unless acted on by an external force. (2) That’s why seatbelts are so important – they can keep you in the car but also provide a greater time of impact as well.

Most states require seatbelts for drivers – ironically, New Hampshire is the only exception. (3) States enforce this law because many people recognize its importance when it comes to the number of fatalities. Seatbelts were first introduced in the 1950s by a neurologist named Dr. Shelden out of his concern for accident-related head trauma – which makes sense because statistics report that you are twice as likely to die in a crash if you aren’t wearing a seatbelt. This demonstrates the significance of its impact regarding the chances of surviving a car accident. After a law in the UK was passed to keep passengers wearing seat belts, there was almost an instant 30% drop in serious injuries and a 29% reduction in fatal injuries after car accidents along with 90% of passengers wearing seat belts instead of the previous 40%. (4) These statistics prove the effectiveness of seatbelts.

When in a vehicle, you have a high momentum due to the large mass – which only increases if you are going at a high speed. In the instance of a crash, you have limited time to stop, and based on the equation Force * time = mass * velocity. (impulse equals the change in momentum), it is clear that the goal of a seatbelt is to raise the time in order to lower the force of impact since the change in momentum remains constant. When the time is doubled, the force is halved. For this reason, a long time of impact can significantly increase the chances of survival or avoiding severe injury. Seatbelts work to provide a greater time of impact by slowing the passenger’s momentum. They act as cushions, which is much safer than feeling like you’re hitting a brick wall. When in a crash, there is going to be a force that will stop you – whether it’s the seatbelt, air bags, windshield, or dashboard. Wouldn’t you prefer the first two?

Airbags are another essential aspect of car safety. (1) When driving a car, it has a lot of momentum – even if you’re traveling at a slower speed. The average mass of a car is approximately 1500 kg, which when multiplied by almost any velocity can equal to a dangerous momentum if the vehicle is out of control. While seatbelts are important to any car accident, sometimes they are not enough to keep you safe. If it is a high-speed crash, a passenger could still suffer severe injuries even with a seatbelt. An airbag provides even more time to lower the force of impact. The airbag inflates when the accelerometer detects a high force, and by the time the person hits it, it deflates. The physics behind the use of the airbag is simpler than one might think.

The concept of conservation of energy also has a big role in why airbags are so important. Motor vehicles have high kinetic energy due to high velocities and mass. Energy cannot disappear – it can only convert to other kinds, such as potential, chemical, or thermal energy. With that being said, change in energy is referred to as work – the product of force and distance. ½ mass * velocity^2 = Force*distance – this equation also shows how even a slight increase of velocity can significantly affect the fatality rate based on the increase of the necessary force and distance as well. When in a car crash, there is usually not a lot of time to break, meaning that the force must be high for the kinetic energy to convert to thermal energy. Unfortunately, that means a lot of danger for the passengers. However, with airbags, slightly more distance is provided in exchange for a smaller force.

Besides airbags and seatbelts, there are even more measures taken for the safety of passengers – one of which is built into the structure of the car. (5) Crumple zones are a great example of this. Already built into the car, they are not as noticeable as airbags and seatbelts. They are designed for one special reason: increasing the time of impact and energy absorption. Cars have a lot of kinetic energy and linear momentum – both of which require a force to stop. However, for both, the other variables – distance and time – can reduce the force of impact if they are increased. The crumple zones provide this for cars – it reduces the force by increasing both of the above. This extra protection is essential for the survival of the driver and passengers since its effect is so significant.

Crumple zones were first commercialized in 1952 by Mercedes Benz when they began introducing cars with a similar feature for the safety of occupants – since then, one can safely assume that the percentage of fatalities in related accidents must have decreased. (6) 1.7 million rear end collisions occur annually, and without crumple zones, a good portion of those could become fatal. The high force of impact in such collisions can cause occupants to face severe injuries like whiplash, traumatic brain injuries, or sometimes even paralysis. For cars with crumple zones, they are specially designed to be rigid in places where the occupants are sitting for their protection but weak in other areas so that they give in during the event of a crash. This can lower that force and lessen the pain occupants may face after a severe collision.

Stopping distance may not be a safety measure, but it has a huge influence on the chances of survival in a crash. Reaction time, traction, and the effectiveness of the brakes are all key components. Based on the equation 1/2mv^2 = F*d (change in kinetic energy = work), with quicker reaction time, the driver has more distance to stop the vehicle or at least significantly slow it down, which can drastically change how the crash takes place. For this very reason, drunk drivers are more likely to crash – their reaction time and judgement are both impaired. Traction provides greater friction (a greater force) to slow the car down, so you would need less distance to safely slow your car. As for the effectiveness of the brakes, working brakes are absolutely essential. If you cannot properly stop or slow down, the chances of surviving a crash become much slimmer.

If a driver has a fast reaction time, they have greater chances of survival. Imagine that someone spots a dog crossing the road they’re driving on – they have to apply the brakes for a certain distance (based on the equation of work and kinetic energy) in order to make a full stop before hitting the dog. If you take longer to react, you will have already covered more distance in that time and have a lower chance of stopping in time, and at most, you will only slow down. Even a slight difference in reaction time can make a difference in whether or not you stop in time. As mentioned before, alcohol causes poor reaction time and judgement. For this reason, fatal crashes are much more likely for drunk drivers for sober ones.

Traction is another factor – when trying to stop your car, you are converting kinetic energy (which comes from your speed and mass) into thermal energy (which comes from friction) in order to reach a full stop. In order to avoid needing a long distance in order to stop, your wheels must have a certain coefficient of friction with the ground. The greater the coefficient of friction, the greater the force – which means less distance needed to safely stop. For this reason, conditions like snow and ice require greater following distance between cars – it takes a greater distance to make a full stop due to the lower coefficient of friction. The traction of your tires can make a difference in the lethality of a crash, so it is important to get new tires when the tread wears out – otherwise, you may find yourself out of control at some point, but your tires won’t have enough friction for you to stop yourself.

Overall, there are several factors that influence the severity of a car crash and its consequences. Airbags, seatbelts, crumple zones, and stopping distance are all significant enough that one should take each into account. With that being said, it is recommended to make sure all safety measures are in working order and that when you drive, you are sober, careful, and aware of the road’s conditions. Once all is said and done, you may have possibly saved your life in the off chance that you get into a car accident. Car safety is key to the survival of drivers and passengers because you never know when you will be involved in an accident – it can happen to anyone. Therefore, it is especially important to have working airbags, seatbelts, crumple zones, and an understanding of stopping distance before going out on the road. 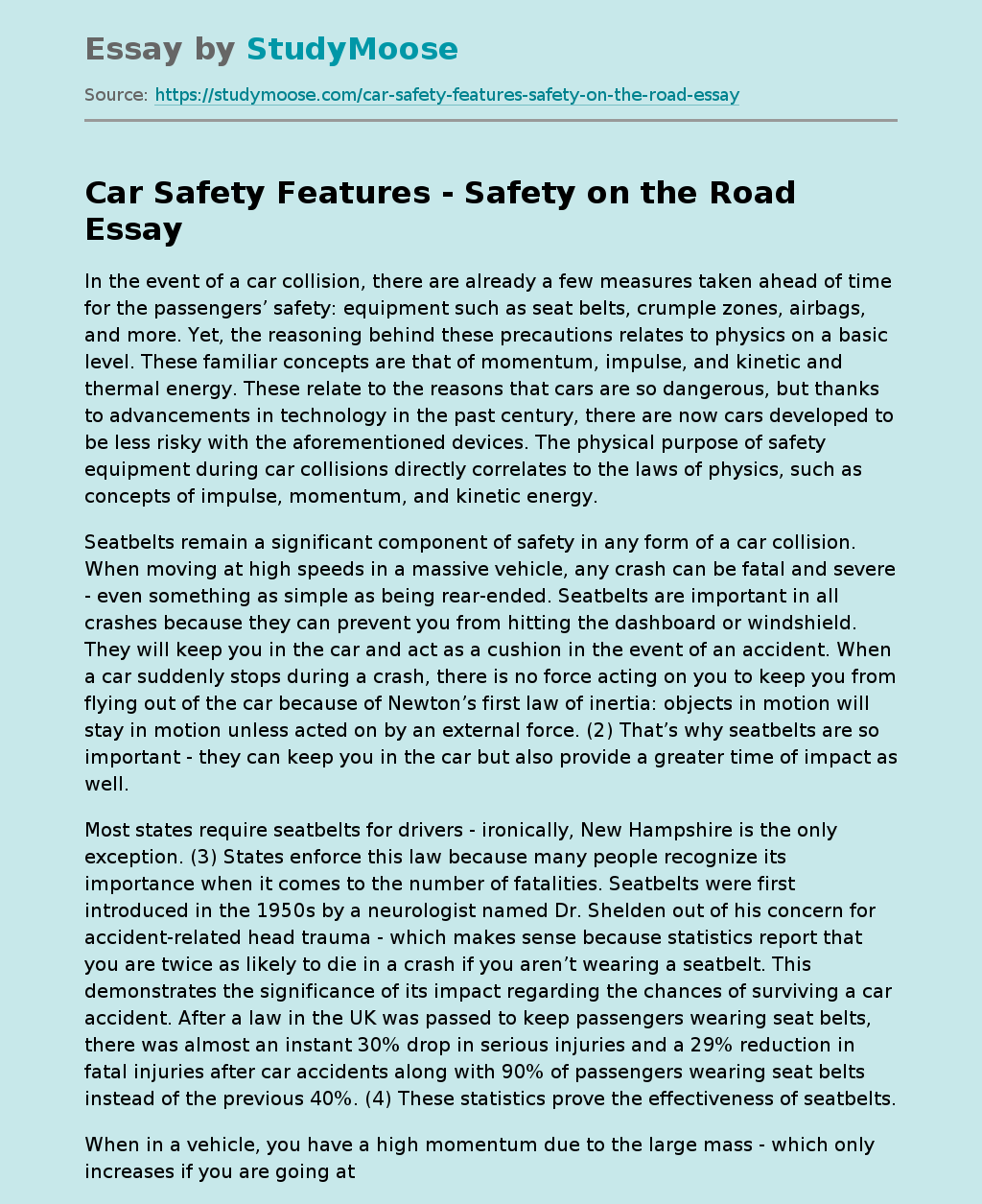