Many teens today are stigmatized with driving while exhibiting less than desirable habits. These habits are commonly known as bad habits. Experience has shown that many of these bad habits are due to irresponsibility and ignoring simple driver’s safety rules. Outlined here will be several examples of bad habits exhibited while driving such as cell phone usage, transporting loud passengers, playing music at very high levels, eating while driving, and under the influence of drug or alcohol. The most prominent distraction for a Teen driver is cell phone usage.

Whether it is answering a phone call, texting or scrolling through a social media application, Teens fail to realize that these are bad habits. Along with the distraction of cell phones Teens also become prone to increase the rate of speed that they are driving. Young drivers are unaware of how some habits of reckless driving affect their lives.

Teens who continue to drive in this manner not only affect their lives but the lives of others as well.

One major way is a potential increase in insurance coverage held by their parents. These bad habits develop into dangerous driving habits that involve breaking the law, in car distractions, and reckless driving behavior which could endanger themselves and others. In several states laws have been passed to prevent texting and talking on the cell phone while driving. Many teens are prone to answer the phone or respond to a text behind the wheel, therefore causing them to take their eyes or concentration off the road.

This behavior will increase an accident occurring by 90%. Speeding is another law that many teens tend to break while driving. Young drivers feel the need to be in a rush to get to their destination. Teens drive at accelerated speed and drive faster than all drivers as a whole. Driving under the influence can also be contributed as another law breaking habit that teens fall victim to. When teens are under the influence, they are prone practice unsafe driving habits.

Alcohol and drugs such a marijuana, can interfere with a teens reaction time which could lead to accidents. Teens feel invincible when it comes to law breaking simply because they are young and immature. Today, drivers have an enormous amount of distractions that can cause so many accidents and are at times fatal. Other habits that are deemed as distracting for teenagers is eating, changing the radio, and rubbernecking. Eating while driving is common but it is an extremely dangerous habit that ultimately prevents you from paying attention to the road. My cousin Daniel, for example, is notorious for eating while driving. He tends to swerve consistently on the road while eating because food inevitably drops on his shirt therefore he has to use one hand to steer while he uses the other to reach for his fries.

Constantly changing the radio while driving is yet another distraction for Teens. Changing the station is a distraction because it causes you to focus on the music rather than on the road. Taking your eyes off the road for second to change the radio station can cause potential danger for all that are on the road. Rubbernecking is a common habit most Teens have because of natural curiosity. Teens can be very curious about accidents on the highway that they cause their own accident by crashing into someone from the rear. Lastly, reckless driving is another habit that teens have. Teens are usually known for reckless driving because of irresponsibility and immaturity. These types of drivers are dangerous because they cut other drivers off and swerve into lanes. My friend Drew is a serious reckless driver because he is always cutting people off if they are driving to slow or driving ahead of him. Unfortunately Teens have the tendency to develop road rage. This involves people who drive impatiently on the road and usually its Teens who are impatient.

For example, my girlfriend will speed, scream, and swerve into lanes just because someone is driving slowly. It is also dangerous to swerve into lanes because this causes unexpected accidents. This can result in other drivers swerving off the road or even the Teens car can flip over on the road. All of the various bad habits discussed are very dangerous and life threatening, but Teens still seem to continue developing these habits. Car accidents in Texas are one of many causes of death particularly because Teen drivers are becoming increasingly distracted while on the road. As Teens continue to drive while enlisting all of these bad habits the statistics will increase. Driving demands undivided concentration.

Paying attention is very important because as a driver, it is hard to predict if other drivers are paying attention to the road or being distracted by things such as using cell phones. Dangerous habits may not seem much of a big deal but until it becomes life threatening, a lesson will be learned and the realization of needing to eliminate these types of habits will become acknowledge. In conclusion, educating teens can eliminate these habits and prove useful for other drivers because it would prevent accidents and lower the statistics of causes of death on the road. There is a saying, “Good habits are as hard to break as bad habits.” For Teens that’s a statement to live by.

Dangerous Habits Associated with Teen Driving. (2016, May 05). Retrieved from http://studymoose.com/dangerous-habits-associated-with-teen-driving-essay 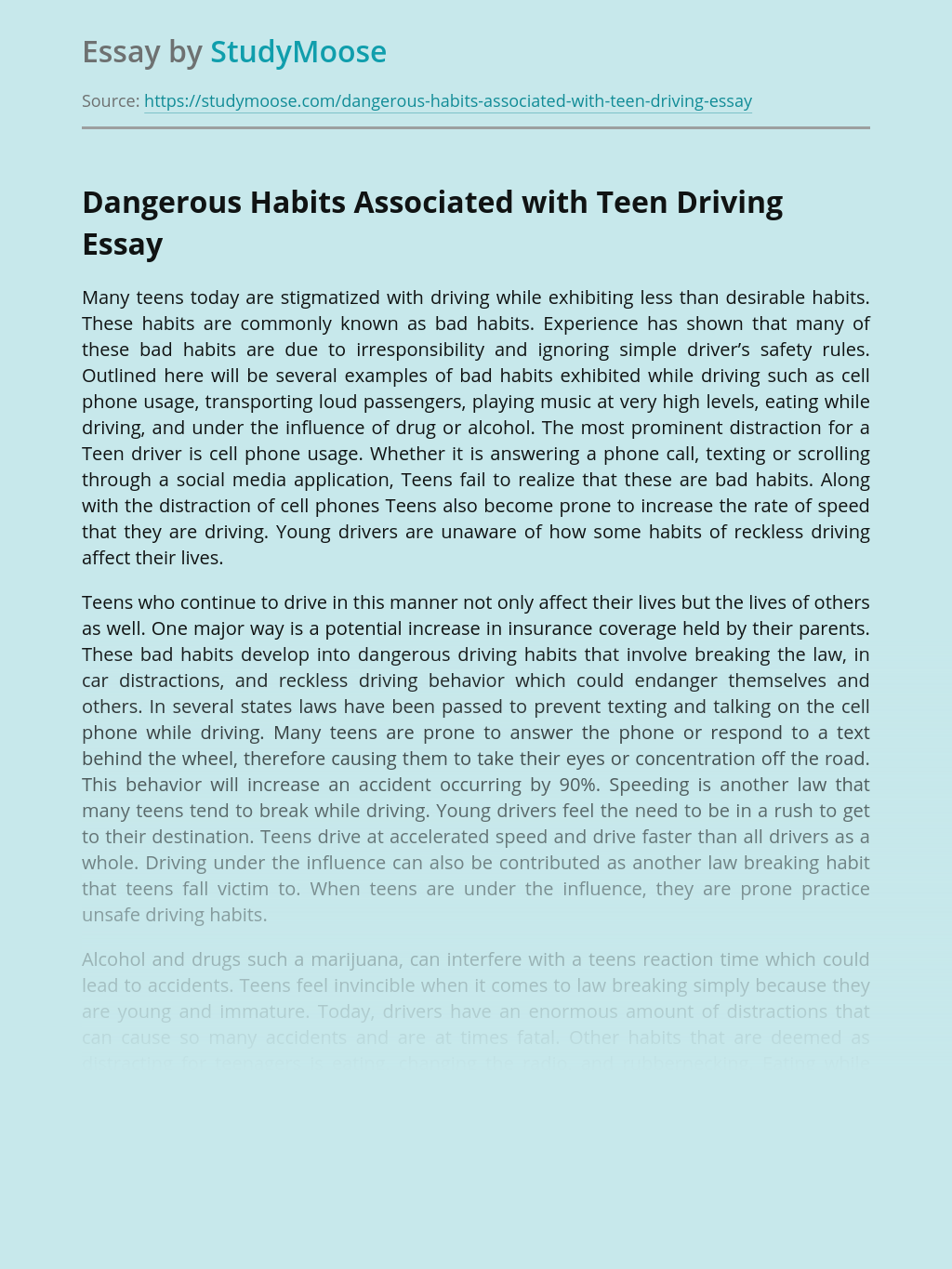