The key features and limitations of a liberal democratic state

Democracy is a frequently used word but its meaning is rarely fully understood. A democratic political system is one in which the ultimate political authority is vested in the people. The word democracy comes from the Greek words “demos” which means the people and “kratos” which means authority. Democracy first flourished in the ancient polis of Athens, where huge gatherings were held in order to vote on certain issues.

Liberalism is a political view that seeks to change the political, economic or social quo to foster the development and well-being of the individual.

Don't use plagiarized sources. Get your custom essay on
“ The key features and limitations of a liberal democratic state ”
Get custom paper
NEW! smart matching with writer

Liberalism is more concerned with process, with the method of solving problems, than with a specific programme.

As a political system, democracy starts with the assumption of popular sovereignty, vesting ultimate power in the people. It presupposes that people can control their destiny and that they can make moral judgements and practical decisions in their day lives. In implies a continuing search for truth in the sense of humanity’s pursuit of improved ways of building social institutions and ordering human relations.

Democracy requires a decision-making system based on majority rule, with minority rights protected.

Effective guarantees of freedom of speech, press, religion, assembly, petition and of equality before the law are indispensable to a democratic system of government. Politics, parties and politicians are the catalytic agents that make democracy workable.

However, with liberal democracy, the term ‘Representative democracy’ is employed. This entails electing individuals to represent us in Parliament and other assemblies. In the modern pluralistic democratic state, power typically is exercised in groups or institutions in a complex system of interactions that involves compromises and bargaining in the decision process, hence Parliament. Democracy tends to be equated with a good system of government and ‘remains the best defence against arbitrary government and tyranny’.

However, is this system of government and control truly beneficial to the state? Perhaps there are certain aspects or vague points in the concept of liberal democracy that can be discussed and even criticised. Does the whole idea in general, minimal regulation on the free market, maximising basic civil rights, create a state in which the government is in touch with the population, or is it simply the case of a representative highlighting arguments that his electorate do not really feel are relevant to them? It is these questions, and more, that must be considered.

Liberal democracy relies on several basic principles to which the government invested with power must adhere to. Initially, the government must obtain its position from public opinion and not by means of coercion, force or intimidation. This takes into account regular, fair elections and checks and balances upon the government from a separate, institutionalised source.

As a government elected by the public, governments of liberal democratic states should be tolerant of not only the general community, but also of minorities and those in opposition of the current governing body. It is essential that societies, clubs and associations are allowed to flourish in order for the concept of freedom of speech and assembly to be fostered in the correct environment. Individuals and groups alike are free from arbitrary arrest and other problems which plague totalitarian states, making life for civilians who do not support the government a misery e.g. Saddam Hussein’s Ba’ath political party in Iraq.

It is also essential that, in conjunction with accepting diverse groups and organisations, the government does not impose any religion, dogmas or tenets upon the population that has elected them. It is in this capacity that the government must continue to represent public opinion.

In order to offset problems that may occur as a result of intimidation or the like, the election of representatives should ideally be clandestine and totally secretive, with no coercion from government ‘representatives’. This includes freedom of speech, assembly and press. An independent, i.e. not connected to the government, judiciary is essential to secure these freedoms. To ensure the fair inclusion of all associations and that dubious decisions are attributed to the correct source, a series of economic checks and balances should be enforced upon private companies, churches, political parties and others that deal with important decisions. The government is presented with the task of co-ordinating and synchronizing these groups without coercion.

To ensure a fair balance of authority, constitutional checks and balances also need to be made. Powers need to be separated between different officials, where a steady balance is founded and there is an even spread of ‘political clout’.

If, for example, there is a dispute between representatives within the House of Commons, then the House of Lords is also available as a division of the legislature. This is essential as a postponement should disagreement arise. This is also observed on a local level as well as national and is intended to bring delay, consultation and eventually compromise to please the majority of people.

The problems and objections with liberal democracy arise when one looks beyond the simple, ideal theory and towards the complicated, diverse world that is reality. For instance, social and economic class is an issue for many. A perfect example is the fact, that although we vote representatives to sit in parliament and make decisions concerning us on our behalf, these MPs, leaders and parties in general are composed of those whose social and economic background is not typical of the populace. This may contribute to government representatives being alienated from their electorate and therefore losing touch of the agenda they wish to discuss. In addition to this, the public have no say whatsoever in who stands as candidates, hence limiting the opportunities available for individuals winning a seat in Parliament.

Back on the topic of minorities, the belief that a majority vote provides astrong and stable government is questionable, due to the fact that it is bought at the expense of minority representation in Parliament. There is also the imprecision of the constituency sizes. For example, if a region of the country with a population of 400,000 has two representatives in Parliament, and another region with a population of 30,000 has four, where is the sagacity of the current electoral system? The former locale would be poorly represented and as a result of the overall system, it is possible that a weak government could be the product.

Following on from this, if the government must be responsive to public opinion in order to survive, surely the policies they follow may then be weakened somewhat by compromise and demands of the public in general. There can then stand hazy ground, where the government has to decide on popularity, or the decision it believes to be correct. After all, they have been elected in order to make decisions for us and if certain referenda were held e.g. on the death penalty, the government might be concerned that the outcome, no matter how pleased the majority is, may be the wrong one for the country long-term. It is these inaccuracies within the system that constantly form stumbling blocks for consecutive governments.

It is possible that, during a period of particular popularity or unpopularity from the public towards the opposition, the government may choose to call an election. This is left to their discretion within a five year timescale and hands the opportunity of tactical decision-making over to the government. This may provide them with an unfair advantage whereas a fixed term of office, such as in the American presidential elections, may provide a more democratic and fair solution.

The subject of minority rights under a majority voted government is an obvious problem. The only way for a government to deal with this particular quandary is to pay attention to the communities and their leaders, working out compromises and plans in order to satisfy the needs of as large a proportion of the populace as feasible. In this respect, it is left to the government’s discretion, to a certain extent, as to how they treat not only their supporters but also those who oppose them yet still provide a steady governing body with an identifiable policy for everyone to recognise.

In conclusion, one could say that for democracy to work in its purest form it needs to have certain pre-requisites. Society has to be educated and responsible. The state must have a degree of economic stability. Social cohesion and social consensus must exist. Above all, it requires the acceptance of the democratic “rules of the game”;

·that there should be frequent and fair elections.

·that the losers must accept the verdict of the public and allow the majority to govern.

·if the minority wins a future election, it will be permitted to take over the reins of government.

Can democracy ever be created in its most perfect form? It is argued that if governments try to move in the direction of democracy then they have the right to be labelled democratic. Democracy found in America and western Europe was given a huge boost in the 1980s and 1990s when many communist governments gave way to what were termed democratic ones. The same thing is occurring in the Third World which is further undermining the hold of authoritarian regimes but giving a further boost to western style democracy. It is the plight of the minority and the constant quest for governments to discover the right system or formula that drives the political system and in a liberal democracy, this belief is allowed to flourish and should contribute towards the betterment of democratic rule in general.

The key features and limitations of a liberal democratic state. (2016, Jun 21). Retrieved from https://studymoose.com/the-key-features-and-limitations-of-a-liberal-democratic-state-essay 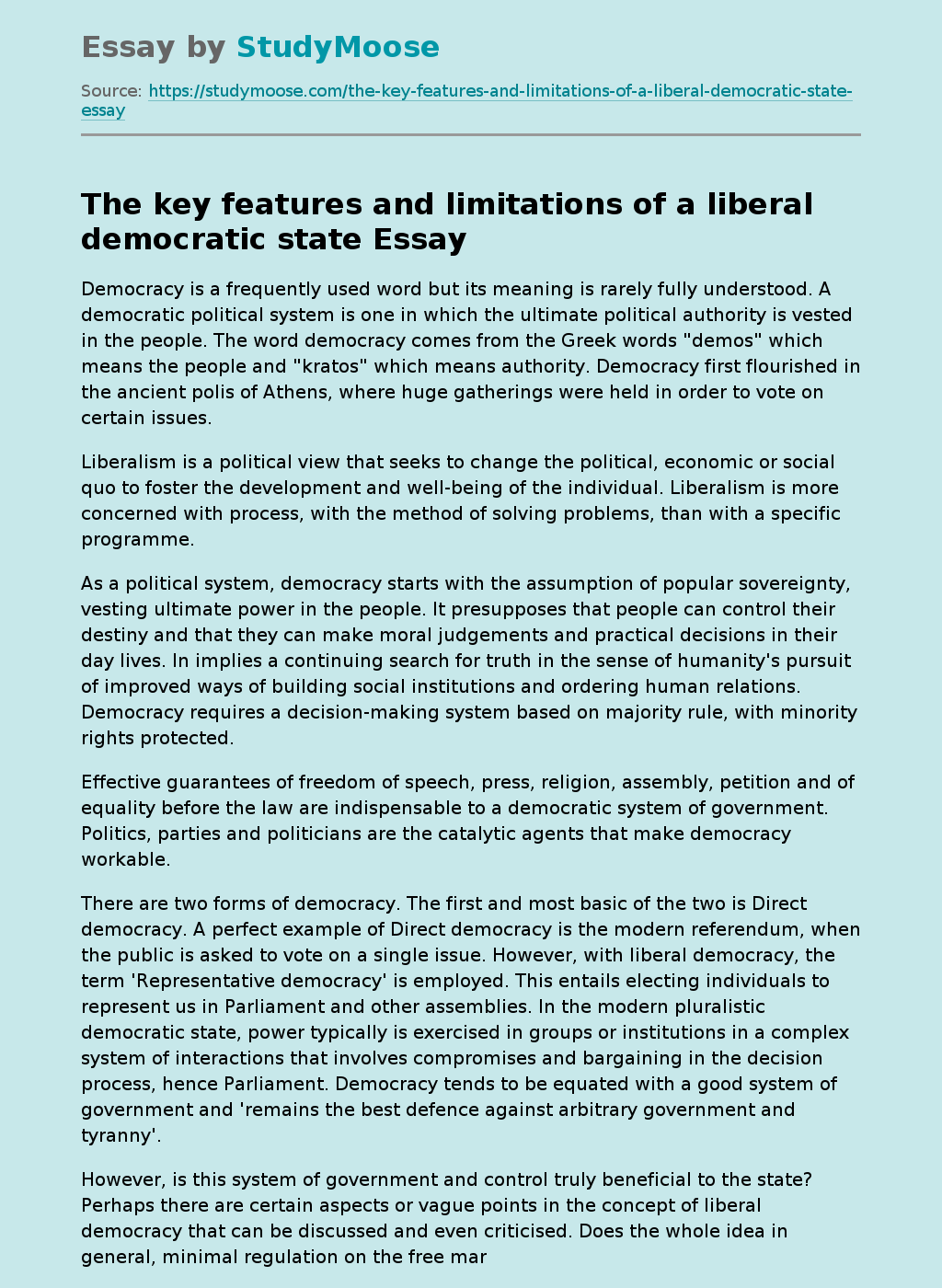