Liberal arts deal with the sections of education that specialize in imparting general knowledge to learners. This is usually meant to build a strong intellectual capacity on general subjects that would not require technical or even professional skills. The sections of arts that are basically seen as to be in this category include languages, philosophy, music, basic arithmetic and history. In as much as humanities are considered to be part of liberal arts, they my lean towards scientific processes like those in geography and research sciences.

Don't use plagiarized sources. Get your custom essay on
“ Liberal Arts vs Science ”
Get custom paper
NEW! smart matching with writer

On the other hand, sciences are based on technical subjects like physics and chemistry. Scientific knowledge is specific and can be based on a plethora of scientific specialties. Some examples may include biology, physics, engineering and medicine. Other areas in sciences that are specific can include actuarial science and applied mathematics. Developments in the current world of education indicate that more and more students are being encouraged to specialize on sciences than liberal arts. Does this signal that liberal arts are dead and everything is now about science and technology?

Specialists in many quarters have advanced arguments that point to the fact that liberal arts are dying fast.

Reasons include the fact that more professionals in sciences receive better compensation packages than their counterparts in liberal arts. The idea that liberal arts are a dying section of education is supported by facts. This is due to the fact that more and more people are embracing education in sciences that seem to be generally more appealing.

The Industrial Revolution experienced in the world over seemed to emphasize the fact that the world would lean more towards technical aspects of education than on the arts.

During the onset of this revolution in the late nineteenth century, inventions in sciences drove many to pursue technical subjects as they seemed to be leading to the most lucrative jobs. Examples lay in the engineering and other technological fields that had strong foundations in sciences. As such, many institutions that were recruiting prospective employees developed pay packages that were tailored to be better than those for employees in the liberal art field. Other factors that point to this being true include the declining budgetary allocation in universities that specialize in liberal arts.

This was aggravated by the recession experienced during the period 2008-2009. A study showed that most students who had degrees in the fields and disciplines in liberal arts suffered job cuts and lay-offs during this period (Cook 1) (The Death of Liberal Arts: How the Recession and Unemployment are making Schools and Students Rethink the Value of an Education in The Humanities 1). The numbers of tertiary institutions that offer courses in these fields have declined by nearly a hundred since the early nineties to date.

Despite this trend in developments, there are facts that point towards this being the truth and there are some others that seem to dispute this idea. Current job markets indicate that every employee has to have at least some basic technical knowledge. This may mostly lie in the knowledge of Information Technology (IT). It is prudent to observe that in the modern world, nearly all organizations insist on recruiting employees who have basic knowledge on how to process data using computers. This may be in writing documents or even manipulating data to obtain a desired result.

Therefore, most organizations recruit prospective employees with basic computer proficiency skills. These skills are deemed to be mandatory in communication and other day-to-day activities in the office. On the other hand, most companies that are recruiting prospective employees are insistent upon the ability of employees to integrate with the community. This would include the immediate community living within the precincts of the location of such companies or even the prospective customers. To have such abilities, one needs to have studied some form of psychology or even sociology.

These form part of the liberal arts. Consequently, these companies recruit employees who have studied in these fields and hence have the abilities to mingle with the said people. This knowledge might be important in marketing or even companies that deal in communications and customer care. Therefore, there are job market patterns that may seem to suggest that liberal arts may not be totally dead. Kathleen Haney, a professor of Philosophy of Education in the University of Houston-Downtown, opines that in the view of a layman, liberal arts are dead.

She observes that liberal arts are mainly important in the formative years of education such as the elementary and secondary education. Later on, when a student needs to become more skilled in specific subjects, he may need the knowledge acquired in the elementary and secondary that dealt more on liberal arts. Such skills might include languages so as to communicate with others well. However, in “The Liberal Arts and the End of Education”, she explains the need for everyone to view liberal arts as losing its shine due to the influence of development.

Development, she insists, impresses upon scholars the need to embrace more technical subjects. This she attributes to the need by more organizations to employ people who have knowledge in practical-oriented subjects like sciences. In as much as her works seem to approve of this as the trend, she however goes ahead to implore us to change our mind-frame so that we can see liberal arts as pivotal in enabling us to be able to be proficient in these practical subjects. She insists that the more technical subjects would need the services of liberal arts to survive.

This she subtly alludes to when she says that languages are the essence of understanding and communication. Therefore, she agrees to the fact that liberal arts are losing their shine due to the current patterns in job markets. She however does not encourage this as it might be of detriment to ignore important sections of liberal arts like languages. The trend that she observes goes way back in time and is founded from the early times. The enthusiasm with which liberal arts were embraced before the Industrial Revolution has considerably gone down due to the mentioned facts.

There seems to be a number of reasons that have been fronted for this kind of happening. It is only natural that for this, there has to be some form of consequences. The future generations face a more challenging task of trying to ignore or even do without an important part of education. As a matter of fact, the consequences might have very heavy repercussions on education in general. The main factor that will contribute to this is the need for people who can efficiently communicate in certain settings.

For instance, when languages are abolished in the curriculum, students will need extra efforts to learn foreign languages so that they can earn whole-some multi-cultural competency. An example is when a company needs to venture into a foreign market and it requires one of the staff members to be able to communicate to the natives in their language. This would mean that the staff will be required to learn the native language of the people residing in the area. This might be expensive to undertake as the only other option is to employ a native. Many people have come up with arguments in support of the notion that liberal arts are dead.

However, there are some writers who have come up with opposing arguments that seem to be water-tight. The American Council of Learned Societies has come up with issues that seem to show that the liberal arts are still popular in colleges. It discusses the importance of liberal arts in communication and the full understanding of human nature (American Council of Learned Societies 1) (Liberal Arts in American Higher Education: Challenges and Opportunities 1). It is subjects like philosophy and psychology that enable scientists like doctors and psychiatrists to understand how to deal with illnesses of the human mind.

Coupled with this, the languages help in comprehension of several issues. Their argument is based on the fact that liberal arts build a comprehensive understanding of the human being. This seems to be a very convincing argument since most of sciences deal in the physical part of a human being but not on the moral, spiritual and social part. In the international arena, the science vs. art debacle has taken various forms depending on situations. For instance, many parents still insist on their children taking more professional courses as opposed to them having to take courses in liberal arts.

It is of interest to note that many writers attribute this to the different priorities that people in the different social classes have. For instance, many students in the upper middle class will not feel pressured to earn degrees in the professional courses that are not seen as art-based. On the other hand, students who have to work to earn money for their fees have always chosen professional courses over the liberal arts. This has been attributed to the fact that the students from affluent families have no worries about fees and which college they feel they want to attend.

Their schooling is a matter of choice as opposed to students with limited financial abilities who will be restricted to their budgets due to financial constraints. In conclusion, it has been shown that liberal arts are losing attention as an important part of education. Many factors have pointed to this. It is important to note that the need to study other technical subjects important in scientific development have led this. It is also important to note that the foundations of basic education are laid through the use of liberal arts like languages.

Therefore, it is pragmatic to stop this trend before it leads to harm. The fact that more and more institutions are beginning to lower the budgetary allocations on liberal arts is worrying. It is worth noting that the recession exposed the weakness in the humanities sector of education as professionals in this field suffered more job cuts. This would actually lead to anyone conclusively saying that the liberal arts are actually dead. However, many a writer has sufficiently come up with arguments that signify the importance of liberal arts in the current and future settings.

Therefore, while it is important to note that liberal arts are dying, it is a task set upon us to develop curricula that will ensure that the sections that liberal arts cover in education are taken over by an equally fulfilling branch of education. References Cook, N. The Death of Liberal Arts: How the Recession and Unemployment are making Schools and Students Rethink the Value of an Education in The Humanities. (5th April, 2010). Newsweek Web Exclusive. Web. America Council of Learned Societies. Liberal Arts in American Higher Education: Challenges and Opportunities. 2005. American Council of Learned Societies. Print. 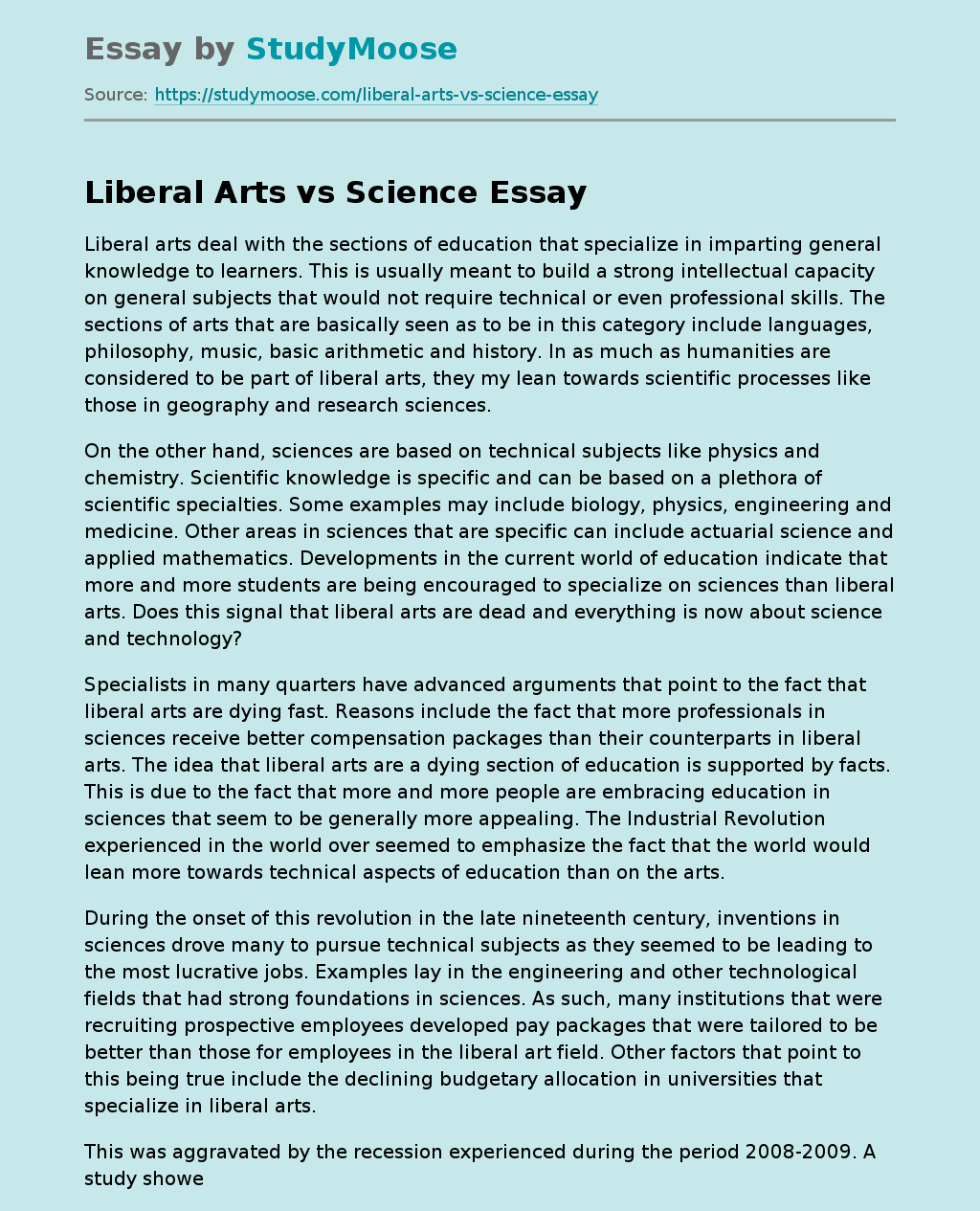