Since the post-World War 1 period, Liberalism has been actively advanced by Western (or ‘first-world’) states as a desirable system of political theory. According to Dunne (in Baylis & Smith 2001, pp. 163), the basis for its appeal stems from the fact that Liberalism is viewed as inherently ‘optimistic’, making it a natural counter-theory to the Realist theories advanced by practitioners of realpolitik in the past (feudalism, dictatorships etc.). What makes Liberalism ‘optimistic’ in a sense is that, as an ideology, it is fundamentally anchored around the liberty of the individual, and furthermore, strives for global peace.

Don't use plagiarized sources. Get your custom essay on
“ Should Liberal States Promote Their Values Abroad ”
Get custom paper
NEW! smart matching with writer

Considering the rampant destruction and bloodshed experienced by many of the states involved in both the World Wars, it would logically follow that states would find it in their best interests to have a political system in place which would provide them with the tools necessary to avoid military conflict as far as possible.

But as history has shown us, the advancement of liberal values has not always been done through peaceful means, and indeed, one only has to look at the disaster that was the Vietnam War and the current war in Iraq to notice the forceful strategies utilised in an attempt to advance those very goals.

And at a recent war protest in the US, Justin Cliburn, an ex-army veteran, was quoted as saying that “We’re occupying a people who do not want us there” (Barakat 2007, ‘More than 190 Arrested at Iraq Protest’, The Guardian). Cliburn had served in Iraq and knew first-hand the attitudes of the Iraqi people, and from his experiences, saw that not everyone embraced the glowing torch of liberty.

It thus begs the question: should liberal states be actively trying to promote and instil their values abroad? And if so, is force – a tool apparently contradictory to the Libertarian dream – a legitimate instrument in securing these goals? This paper will first seek to analyse the driving motivations behind the spread of liberal values and conclude that, while the ideology of liberalism is not well-suited to every state, it does have validity as a successful and peaceful political system. The paper will then analyse the use of force and show that while its legitimacy is without question, it remains highly undesirable and in most cases, harmful to the successful implementation of liberal values within the state in question. The alternative tools available will be analysed for effectiveness, and the paper will conclude with the belief that the best hope for the successful dissemination of liberal values would be through liberal states’ own examples.

Liberalism’s fundamental element has been that of democracy. With regards to this, no one nation encompasses the ideal of liberal democracy more than the United States of America. For decades, the spread of liberal democracy has been indoctrinated into American foreign policy, exemplified by Woodrow Wilson’s ‘Fourteen Points’, Harry Truman’s ‘Truman Doctrine’, John F. Kennedy’s ‘Freedom’ Doctrine, and Franklin D. Roosevelt’s ‘Four Freedoms’. The US clearly views the spread of democracy and liberal values as a duty, as obligation to their fellow man, leading Samuel Huntington (, pp. 30) to comment that “[America’s] identity as a nation is inseparable from its commitment to liberal and democratic values.” But why would one nation take it upon itself to so vehemently advance these goals? The answer lies within two rationales: altruism and national security.

According to Fukuyama and McFaul (2007), the promotion of liberal democracy is the right thing to do, for democracy is the best form of government. No doubt, many would view this statement as egoistic and typical of the brash nature of Americans, but Fukuyama and McFaul go on to articulate the formulation for this belief. Liberals believe that the state must always be the servant of the collective will (Dunne 2001, pp. 163). Thus, political competition stemming from a democratic political climate results in better governance due to the fact that leaders competing for support will have to cater as far as possible to their people’s preferences so as to gain and maintain power. Autocracies, it is purported, produces an atmosphere of complacency and breeds corruption due to the absence of political competition. Furthermore, the ideals of democracy, such as individual freedoms and rights, are arguably universal ideals, therefore states (and in this case the US) have a moral duty to promote democracy.

Fukuyama and McFaul make strong arguments for the importance of democracy promotion, but it is not without its flaws. The world is fragmented by ethnic, linguistic and religious differences, and as such, the notion that there exists ‘moral universals’ is viewed as dangerous (Dunne 2001, pp. 179). Gray (1995, pp. 146) aptly articulated that “the universalizing mission of liberal values such as democracy, capitalism and secularism undermine the traditions and practices of non-Western cultures.” And that may illustrate the rejection of Liberalism thus far. Democracy, when promoted by Western states, is inextricably tied in with other Western ideals such as capitalism and secularism. These ideals often do not mesh well with prevailing cultural practices, resulting in dissent and potential military conflict, results contrary to Liberalism’s ultimate goal. This leads to the second rationale: national security.

In 1983, Michael Doyle compiled a list of international wars between 1816 and 1980, as well as a list of liberal states, and concluded that “constitutionally secure liberal states have yet to engage in war with one another (1983, pp. 10).” This finding validates the democratic peace theory, which holds that states practicing liberal democracy will not go to war with one another. Subsequent studies of Doyle’s findings have proven that his findings are statistically significant and not a matter of chance. In consideration of this, it logically follows that by expanding the democratic ‘zone of peace’, the number of conflicts would diminish, creating an international system at peace. Fukuyama and McFaul cite the transformation of Germany, Italy and Japan after World War 2, and the regime change of the fallen Soviet Union as evidence of this: democratic consolidation within these countries pacified the threat to the United States and its allies. Hence the democratic peace theory creates new allies for the liberal states promoting democracy, and in turn safeguards a liberal state’s national security.

The democratic peace theory has by and large been accepted by scholars and political commentators, although there has been much criticism as to the reasons for this phenomenon. Proponents of the theory argue that, at the end of the day, though there may be differing theories in the explanation of the theory, the critique does not negate the fact that the theory holds true. With this fact in mind, the democratic peace theory is the strongest validation for the promotion of liberal values abroad.

Having thus far established that the promotion of liberal values is in fact a good thing, the question then arises as how to effectively promote these very ideals. The various methods available to liberal states fall within a power spectrum, ranging from ‘hard’ power to ‘soft’ power. ‘Hard’ power encompasses coercion and persuasion, characterised by methods ranging from outright military force to economic sanctions. ‘Soft’ power on the other hand, is infinitely more desirable and is best characterised by the process of simply setting a good example, as well as through diplomacy.

The threat of force, while seemingly contradictory to the goals of Liberalism, is in truth not frowned upon. In fact, there are several instances where there can be a mandate for the use of force. In the case of the League of Nations, Article 16 noted that, in the event of war, member states must, if necessary, commit their forces to the disposal of the League of Nations (Dunne, 168). The inclusion of this rule pertained to Woodrow Wilson’s idea of collective security, but it still evident of the justification for force.

Section 301 of the US Trade and Tariffs act of 1974 justifies the use of force in coercing states to rectify apparent unfair trade practices. The US rationale for this form of aggression is that in order to preserve multilateralism and the principles of free trade, they have to depart from those very principles (Bhagwati 1990, pp. 30-31), thus offering an explanation for the Liberal contradiction highlighted above. Aside from outright military force, liberal states may impose economic sanctions, such as the denial of financial aid for developing countries when they fail to democratize accordingly.

The problem with the implementation of ‘hard’ power strategies is that it often fosters anger toward the aggressive state, and in the case of the US, reeks of hegemonic ambition. This anger often results due to the lack of consideration for unique social conditions. An example of this is Ghanaian anger towards the IMF and World Bank for imposing conditions (in the form of Structural Adjustment Programs requiring Ghana to democratize rapidly) on their loans (Kraus, 1991). And in the case of the current Iraq War, civilian dissent can lead to drawn out military conflicts with no end in sight.

So the most effective tool for spreading liberal values is through peaceful means, or ‘soft’ power. One way of doing this is by simply acting as the best possible example for liberal democracy. Thomas Jefferson tried to instil this belief when he said that “[America] is the sole depositary of the sacred fire of freedom and self-government, from hence it is to be lighted up in other regions of the earth, if other regions shall ever become susceptible to its benign influence” (in Rayner, 1832). Much of anti-Western sentiment stems from the hypocrisy of their actions. In the debate surrounding Section 301, the major complaint was that reciprocity of trade concessions was not mutually guaranteed, turning the US into a ‘benign dictator’ (Bhagwati 1990, pp. 36). This image is quite contrary to the one that the US purports to be.

In the end, a rational person can see that liberal democracy is something that is worth promoting. The fundamental good of democracy is evident by the U.N. Commission on Human Rights adopting a resolution in 1999 affirming democracy as a human right (Diamond 2000, ‘Promoting Real Democracy’, Blueprint Magazine). The challenge for liberal states and for Liberalism itself is thus not in promoting democracy, but doing so in a way that, as Dunne has correctly articulated, is non-universalizing and non-Westernizing, thus preserving the traditional liberal value of human solidarity without undermining cultural diversity (2001, pp. 179). 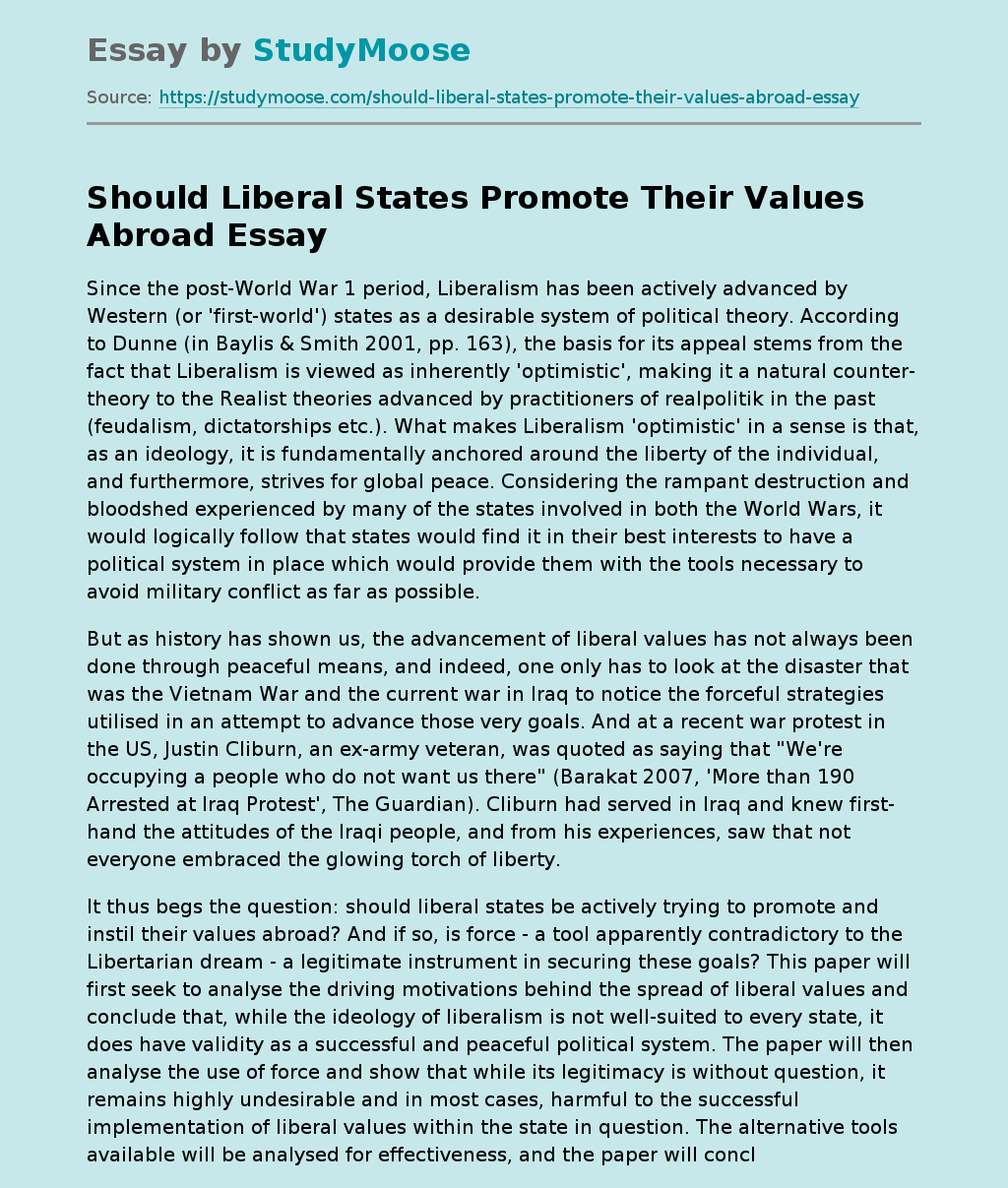