In today’s society it is nearly impossible to go a day without being subjected to some form of media that does not marginalize women. The media takes a myriad of forms that include but are not limited to televisions, phones, and the radio and it is no surprise that the media has a huge impact on society. Most of the time the media is heralded as a pivotal source of news and entertainment however, many look down on the media giving it a negative stigma as being biased and dominated by males.

Don't use plagiarized sources. Get your custom essay on
“ Comparing and Contrasting Liberal, Socialist, and Radical Feminism ”
Get custom paper
NEW! smart matching with writer

Males are seen as so called “experts” on talk shows and are the most common voice in radio commercials. Indeed, the very media in which we engage ourselves on a daily basis reflects the foundations and beliefs of our society where in which women are seen as nothing more than sex objects that belong at home while the husband goes out to be the breadwinner. Recently, in the past few decades, there have been movements and established groups to eradicate the male dominance that predominates in our society.

These groups, known as feminists, have fervently fought for the equal rights and legal protection for all women from the tyranny of the men and gender oppression. Although there is an established stereotype that all feminists are man-haters, who believe in a lesbian lifestyle, it is important to understand that there are three different forms of Feminism perspective that have shaped the women’s movement today. Known as Liberal, Socialist, and Radical feminism, it is important to understand the differences between the three so one can ascertain each one’s unique concepts and assumptions on gender oppression.

In addition, it is also important to acknowledge the individual philosophies and short comings of each feminist perspective in order to understand them entirely, and so both men and women can strive for a more just society. The first aspect of feminism that’s going to be discussed is Liberal feminism because it recognized as the oldest form of feminism. Liberal feminism developed out of 18 century liberal philosophy that believed there should be limited government control on capitalism, free speech, and free trade.

Instead of using government as the basis of their protest, Liberal Feminists argue for sexual freedom and emphasizes autonomy and individualistic self expression. Liberal Feminists believed that sexual difference had exploited women as a whole; excluding them from politics, economics, and a liberated social life (Rosen 85). They believed that women’s rights had always been based on man’s experience, and did not account for the huge differences in the rights experienced by women. Examples of these differences can be seen in the very constitution the United States uses as a foundation for its society.

Liberal Feminists target the constitutional belief that one’s right to pursuit of happiness, when applied to women, takes on a completely new meaning. Most of the time, this new meaning was applied to the way in which women were unable to control their bodies and how they were to act different from men (86). Liberal feminists believed that in order for the constitution to be valid on the grounds of liberty and equal rights, men should take it upon themselves to be more active in the home. In addition, they believe that there should be a complete end to sexual harassment in the work place and violent acts against women should cease.

Although Liberal Feminism was a great idea and a just cause, it received a lot of criticism from multiple angles. Liberal Feminism strived for women to collaborate towards working for a less sexually hindered society (Lindsey 14) however, this engendered anger from other feminists groups who believed that a more forceful approach was to be taken. Opponents of Liberal Feminism believed that a revolution was necessary and that simple acts of from Liberal Feminists social groups could not usher forth the necessary changes in women’s rights. Another aspect of feminism mentioned is Socialist Feminism.

It is important to understand this form of feminism because of how much emphasis it places on the structure of society. Because Socialist eminism is strongly rooted in the structure of society, it rejects the individualism and autonomy that Liberal feminists believed in. (14). Socialist Feminists flourished from the 60’s through the 70’s from an assortment of groups, and was established as a middle group between Radical feminism and the Liberal left (Enns). In addition to focusing on women’s liberation, early Socialist Feminist targeted race as well as capitalism’s exploitation of the working class as important elements of woman’s liberation.

Because Social Feminism bases itself on the oppression of a Capitalistic Society it is no surprise that it has seminal roots in Marxist theory. Karl Marx, the founding father of Socialism believed that society is fundamentally constructed from people’s relations and the formation of various social classes as they work to survive. Where Karl Marx focuses on work as the pivotal element in the division of society, Social feminists view sex as the big divider (Keohane 6).

Social feminists view sex as an important element in the process of shaping and establishing hierarchies. Social Feminists base their beliefs on the Marxist concept known as Praxis which, when defined, is the requirement for humans and society as a whole to make the necessary changes in their environment in order survive (Enns). The praxis according to socialist feminists establishes oppressive gender roles to individual private sectors of life, and establishes a sexual Hierarchy where women are oppressed by men (Keohane7).

This oppression entailed specific gender roles such as: dictating a women’s duty was solely to the home, that a women’s responsibility was child birth, child rearing, and the overall upkeep of the home. In addition, gendered oppression are defined outside the home with the presence of the “Glass Ceiling” in the workplace where woman are not paid as much as men. Socialist Feminists view the home as an essential means f of production in today’s society, and although there is no cash compensation, the roles of the home are a large contributor to the structure of society (Keohane 7).

In response to all the oppression caused by political and social institutions in society, Socialist Feminists believe that the abolishment of Sex is the key to unlocking the door of gender stereotypes (Hesse-Biber 226). In addition to the ending of gender stereotypes they also believe they should be looked on equally as men and eradicate alienation in both home and the work place (226). The next form of Feminism that prevailed through the sixties and seventies is known as Radical feminism. Mentioned earlier, Radical Feminism was an established movement against social hierarchy similar to Socialist Feminism.

The basis for the Radical feminist argument was that women constitute a sex class, that relations between women and men need to be recast in political terms, and that gender rather than class was the primary contradiction”. In Alise Echol’s in depth work titled Daring to Be Bad and seventies, she states that Radical feminists dared to be bad by actively debating areas such as contraception, the repeal of abortion laws, the institution of community controlled day-care centers, and most importantly, the media’s objectification of women( 4).

Radicals are characterized by their intense action, and overall vigor when dealing with matters pressing to them. They are known for to handle matters aggressively and have been labeled “militaristic” (6). Such aggressive action has issued forth great success for Radicals in areas such as legalizing abortion, improving birth control, and larger tolerance for homosexuals. However, their fervent passion for change has given them negative names and they have often been the victims of malicious diatribe such as Dike, and Femi-Nazi.

Because of such labels, it is imperative that one is able to discern between the different forms of Radical Feminist: Radical Culturalist’s and Radical-Libertarians (6). When comparing and contrasting Radical Culturalist’s and Radical Libertarians, it is important to first note the similarities between the two groups. The most important similarity between the two is the commonly held belief that society’s overall opinion of women is horrible, and similar to the foundations of Socialist feminism, they find it to be very oppressive.

Both classes of radicals are sickened by the male domination in the media, and how women are depicted as obedient house wives and sex figures. Ultimately, Culturalist’s and Libertarians agree that men should be completed eliminated as a social hierarchy all together. Radicals believe that men oppress women by their sexual dominance in culture, and many have turned to lesbianism as a means to separate themselves from the established male hierarchy (Lindsey 16).

Radical Libertarians are more commonly homosexual than Culturalist’s because they believe that in order to get away from sexual hierarchy they must get away from heterosexuality where men assert control. Due to the number of women who have turned to lesbianism, Radicals have given feminists, as a whole, the stereotype of being an exclusive homosexual group. Homosexual groups have flourished in the past decade thanks to strong radical feminist movements. With such a strong advance and prevalence in society many conservatives have found this to be an attack on traditional ideals and family.

Similar to Liberal and Socialist feminists, Radicals believe that traditional ideals and religious beliefs are based on man as a whole. In turn, Radicals believe this fails to objectify women in a similar way. Radical Feminists seek to eliminate the notions that all women have a vocation in motherhood and a child needs constant care from her or his biological mother and that Lesbians are viewed as inferior caregivers (Cohen 33).

Like the other forms of feminism mentioned earlier Radical Feminism oes not exist without its own criticism. One such criticism comes from liberal feminists who believe that the militant style of Radical feminism causes many divides in society, and instead of collaborating and working with men in society they seek to increase the tension between genders. Another criticism of Radical feminism exists in the realm of science in which they perceive reality as an inseparable whole (Hessier- Bier 236), and that nature as whole can only be understood by women.

In conclusion, gender oppression effects society as a whole and altogether sexism has a huge impact on everyone in our society. In recent decades feminism has been an active force to change how women are viewed in society. Feminism has sought to accomplish this in various ways with Liberal, Socialist, and Radical feminist movements. Although they share similarities and have differences, it is important for one to understand these three fundamental areas of feminism so he or she can ascertain the various efforts that have taken place to change our society.

Finally, it is as pivotal for men as it is for women to understand the various feminist movements that have taken place in society. Where women need to take imitative in their lives and come to terms with the cruel reality that they are marginalized in all facets of society, men must also take responsibility and learn to be a voice against a male established hierarchy in our society. Ultimately, change cannot occur unless men and women come together to fight against gender oppression. 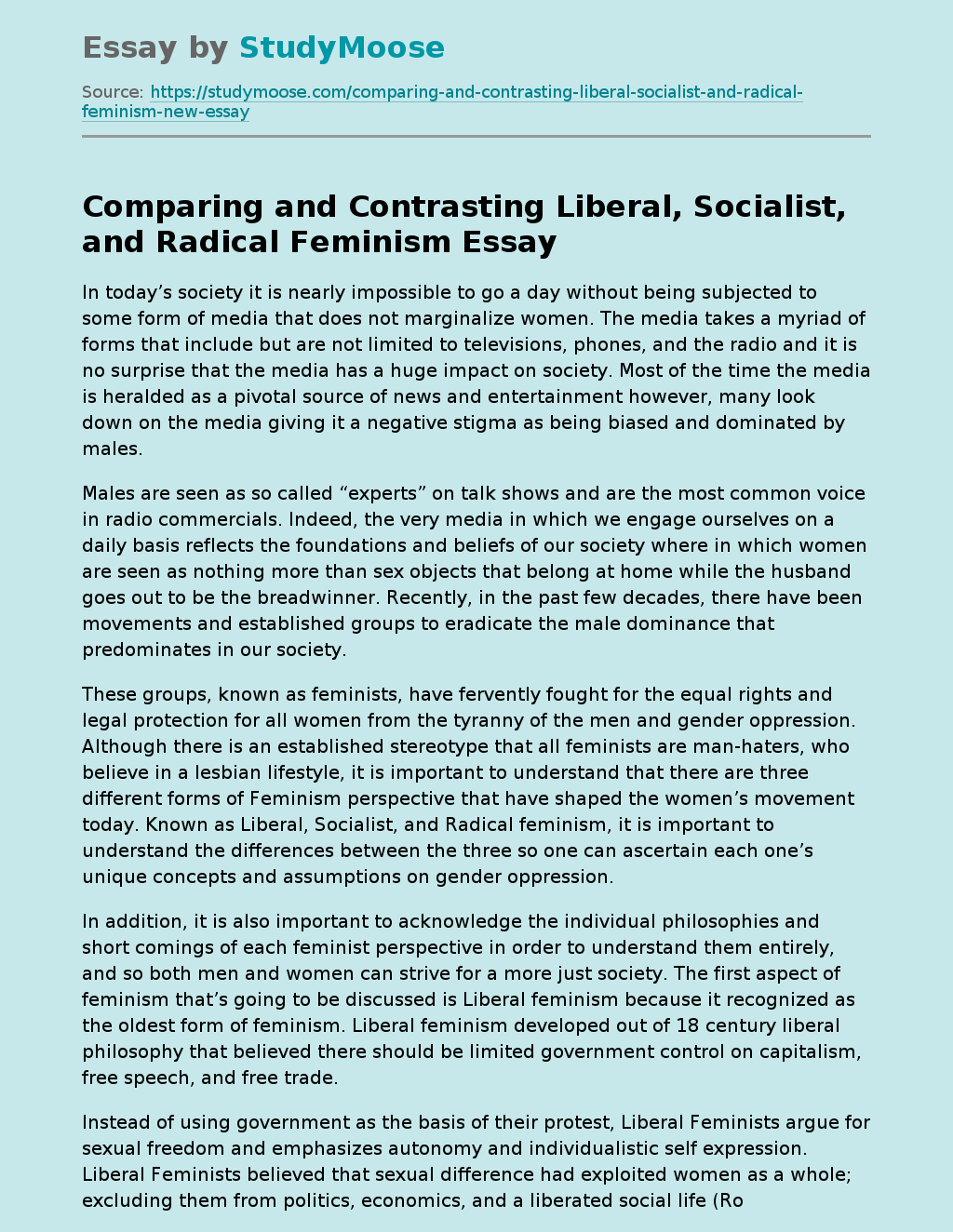