Thomas Hobbes and John Locke were two great political theorists of their time. They both provided wonderful philosophical texts on how our government should govern us. This paper will show the largest differences and some of the similarities between Thomas Hobbes’ Leviathan and John Locke’s Second Treatise on Civil Government. Although they do have some similarities, Hobbes and Locke have different views on most of their political arguments, and I will expand on their differences on the state of nature, government, and social contract.

Turn in your highest-quality paper
Get a qualified writer to help you with
“ Comparing and Contrasting Thomas Hobbes and John Locke ”
Get high-quality paper
NEW! AI matching with writer

Differences between Hobbes’ and Locke’s views of government

Hobbes’ view of the state of nature and Locke’s view of the state of nature offer remarkable differences. Hobbes believed people act in their own self-interest, and they would go to any extreme to help themselves. He believed we are always in competition with each other for the best food, shelter, money, and so on. Hobbes believed the best way to protect citizens would be to have a sovereign that is intimidating and all-powerful.

Hobbes and Locke did not have many of the same views on government.

Though it is not directly stated in his text, most historians believe Hobbes was a supporter of absolute monarchy. He believed the government should have absolute authority over all the citizens. He believed if such a government did not exist, we would live in a world of turmoil. The sovereign (government) has the obligation of keeping the peace and, when need be, national defense. The sovereign establishes all the laws, and has complete legislative, judicial, and executive authority.

Locke’s view of government is very different from Hobbes’. Locke believes people should have a say in government, and Hobbes would disagree with this statement. Hobbes believes that the sovereign should own all the land, but Locke believes that property is private–God gave us this property, and we should use and enjoy it. Locke is also a supporter of the market economy. He believes that when one invests his own labor, whatever he makes should become his own private property.

Government is very much linked with Hobbes’ and Locke’s views on social contract. Social contract binds the people and the government together. Hobbes thinks that citizens should relinquish all of their rights to the sovereign, because the sovereign knows what is best for them. Theoretically, in Hobbes’ view, there actually is no contract, because the citizens have no rights. His view of social contract is more like a covenant. The only time the citizens can say “no” to a sovereign is when the sovereign threatens their self-preservation. For example, citizens may be interrogated for a crime, but they do not have to confess.

Common beliefs and goals of both philosophers

Although they have several differences, Thomas Hobbes and John Locke do share some of the same beliefs. Both Hobbes and Locke were passionate about politics, and they both wanted to promote the common good. Both theorists believed in the state and laws of nature; they just had different interpretations of it. Also, both Hobbes and Locke both believed that people are free and equal in the state of nature. Hobbes and Locke both believed that the primary purpose of the government is to protect people. However, if the government does not protect the citizens, the citizens can revolt and go against or above the sovereign. The most important similarity between Thomas Hobbes and John Locke, however, is that their works were influential in shaping people and government in regards to how a society should operate.

Thomas Hobbes and John Locke were the two most influential political theorists of their time. However, they had opposing views on almost every political issue. Their theories stem from their dissenting opinions about who should be the center of government: Hobbes believed there should be a monarch, while Locke supported Parliament. Examples of both men’s thoughts and opinions can be found throughout history. France and some other European countries sided with Hobbes and had absolute monarchies, while England and later the American Revolution used Locke’s thoughts in developing their governments. Hobbes and Locke wrote about and educated the citizens about the two extremes of running governments, and their opinions were so valuable that we still study them today, hence this paper. 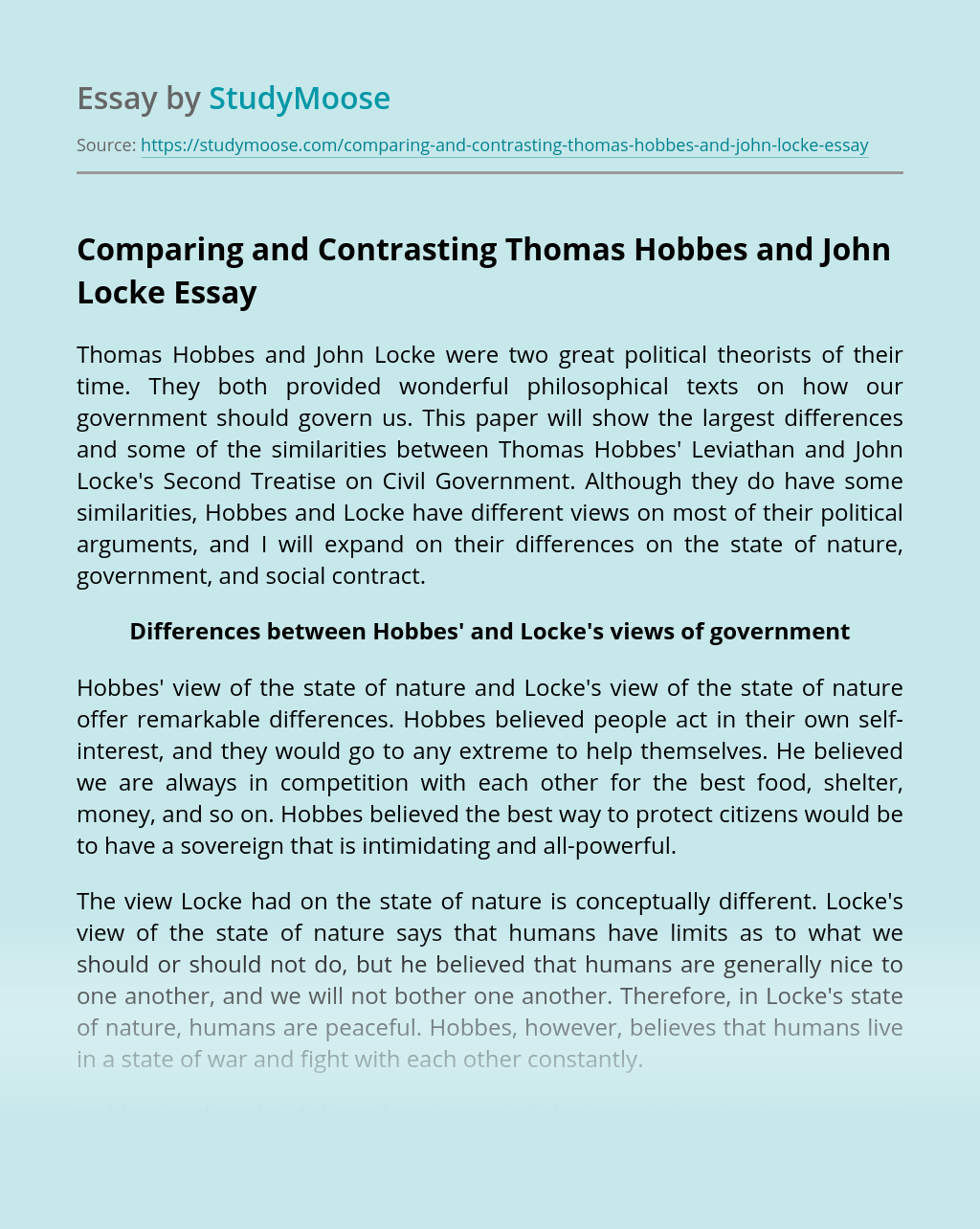 Turn in your highest-quality paper
Get a qualified writer to help you with
“ Comparing and Contrasting Thomas Hobbes and John Locke ”
Get high-quality paper
Helping students since 2015
Stay Safe, Stay Original