Literature is the universal language of life. No matter what language, literature reports life. When it comes to gender roles, literature has a variety of stories. Everyone has their own likes and favorite, I will explore two popular short stories. Men and women have debated gender roles for generations, causing divide amongst them in some cultures. Two stories that have an underlying approach are: “The Secret Life of Walter Mitty” by James Thurber and “The Story of an Hour” from Kate Chopin.

Don't use plagiarized sources. Get your custom essay on
“ Comparing and Contrasting Gender Roles and Marriage ”
Get custom paper
NEW! smart matching with writer

I will compare and contrast these two literary works.

Gender roles can be divided into numerous parts, but the most familiar and popular are the marital stories. In the short story, “The Secret Life of Walter Mitty,” the main character seemed heroic in his daydreams, but was bossed around by his wife in his real world. In that marriage, the gender roles are tricky. Mrs. Mitty came right into the story fussing at Walter about driving too fast. Walter, just coming out of his daydream, just stared as she yelled: Not so fast! You’re driving too fast! You were up to fifty-five, You know I don’t like to go more than forty.

You were up to fifty-five (cited in Clugston, 2010). Walter seemed to be mindless in her conversation until she reminds him to pick up his overshoes. A showing of the tug-of-war of gender roles in marriage occurs when Mrs. Mitty fusses at Walter his gloves. Walter puts on the gloves, but removes them when she is out of his presence.

He shows some resistance to her loud, bossy ways. Walter began to daydream again, only to come out of it with a reminder of his wife’s orders. He knew if he forgot things, she would nag him on and on about forgetting.

The thought of her nagging causes him to enter his third daydream of the day as he walked the streets of Waterbury. Comparing and Contrasting GENDER ROLES and MARRIAGE In the case of “The Story of an Hour,” Kate Chopin (1894), portrayed this marriage on a different scale. Love ones come to Louise Mallard’s house to inforn her of the news that her husband Brently Mallard, had been killed. When Louise first heard the news, she responded with grief as expected. She cried and stared off into the sky with sorrow until a thought came across her mind.

She began to whisper, “free, free, free” and a warm feeling came across her body. The more she thought about it, the more she embraced her found freedom. The sudden emotional rush causes Louise Mallard, who has a heart condition, to get excited at a high level. Mrs. Mallard saw happiness in her future, and she welcomed the idea with open arms. She began to think: There would be no more powerful will bending hers in that Blind persistence with which men and women believe they has a right to impose a private will upon a fellow-creature (cited in Clugston, 2010).

Marriage must have equality in order for it to work (Weigel, 2003). In “The Story of an Hour,” Louise Mallard gives off the impression of a woman that is tired of marriage. The thought of her husband’s death gave her the feeling of freedom. She no longer had to feel or be oppressed by a man. The reader can sense this when first reading the story. Mrs. Mallard’s behavior was not the same as other women when hearing that their husband was killed. The writer described her behavior as “She did not hear the story as many women have heard the same, Comparing and Contrasting GENDER ROLES and MARRIAGE ith a paralyzed inability to accept its significance” (cited in Clugston, 2010). She just dried up and went to her room to be alone in her thoughts. Walter Mitty shows issues of gender roles when he is awaken out of another daydream, this time he is a surgeon. The parking attendant makes Walter testy with his screams and yells at him as Walter is in the wrong lane. The parking tells Walter to just leave the car and he will park it. The parking lot attendant parked the car with excellent skills, further enraging Walter. He thought to himself that the parking attendant is very cocky.

As he walked out into Main Street, he remembered a time when he had to have his chains removed by grinning, young garageman. He then thought that is the reason Mrs. Mitty makes him go to a garage to have his chains removed. This had Walter boiling because he was made to feel cripple, like he could not do it himself. He thought if his arm is in a sling, they garagemen could not grin at him in that condition. The break outbreak of anger reminded Walter of the over shoes his wife told him to pick up. He began to rack his brain for the remaining things his wife told him to pick up.

She had told him twice what to get as they set out from the house. Walter really disliked these trips because he would forget something and have to hear his wife’s mouth about it. Gender role is constructed not only in the web of relationships outside the family but also through day-to-day marital interaction with spouses (Sullivan, 2004; Thompson 1993). Walter thought about the nagging from his wife for forgetting something. He hears a newsboy shout about the Waterbury trial and off he goes into daydream number three. This time he sees himself as a accused witness in a courtroom trial. 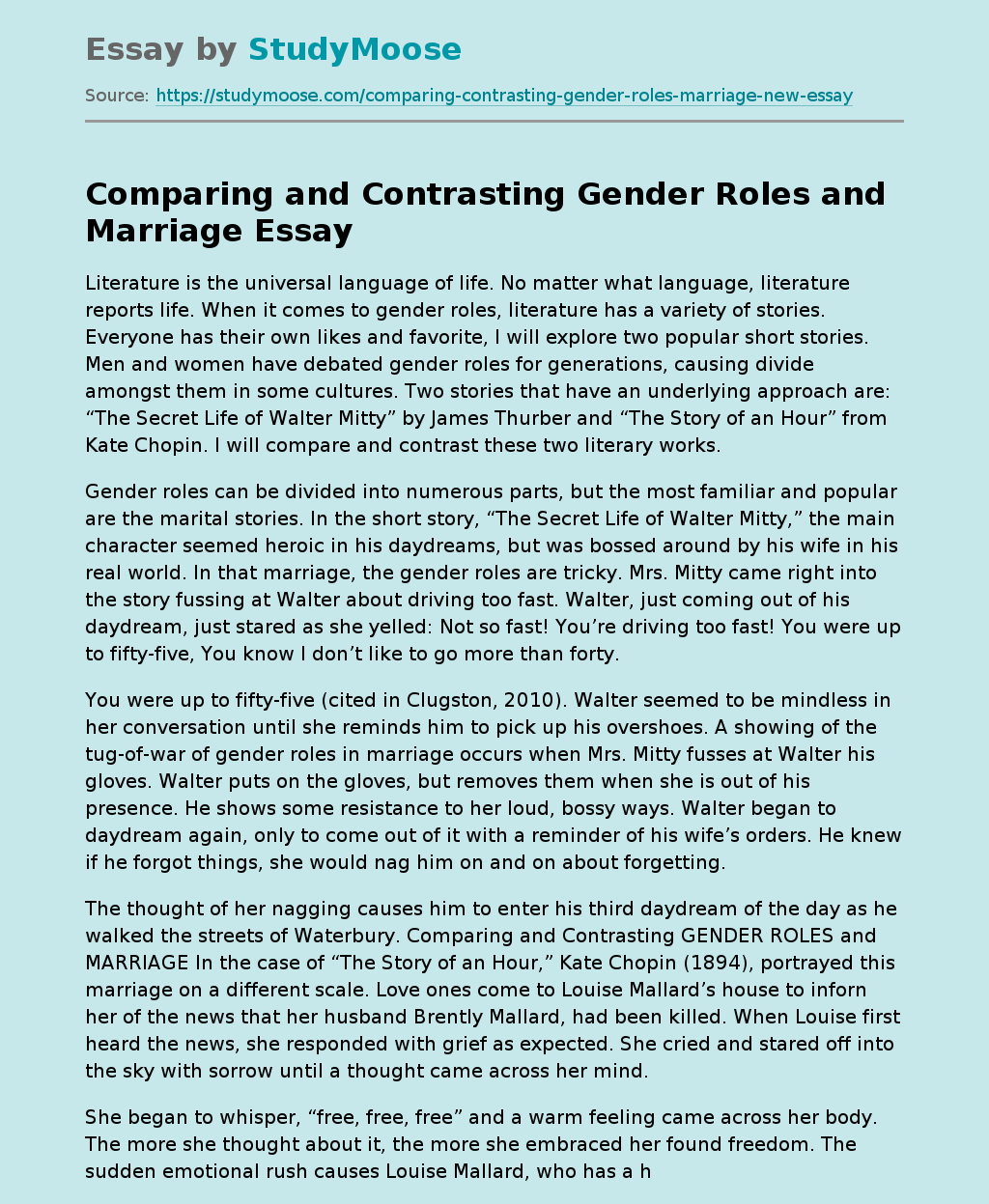