Turn in your highest-quality paper
Get a qualified writer to help you with
“ Compare and Contrast WWI & WWII ”
Get high-quality paper
NEW! AI matching with writer

The ways people fought in the First World War had very little in common with the way they fought in the Second World War. World War I started the trend that there was no difference between the citizens of a nation and the military.

It had them entering the Second World War with determination and a better appreciation of the devastation that war could bring .There were also some similarities to both world wars.

Both wars were started by threats to the balance of power, and both were conflicts between entire nations and people, not the governments . Both wars started with a general war in Europe and escalated to a worldwide situation. Eastern Europe also went under transformations after both World Wars . Both World Wars included the falling of major empires. The First World War saw the fall of the Austro-Hungarian, Ottoman, and Russian empires. The Second World War saw the end of the British, French, and Dutch empires. The collapse of these empires caused similar results after both World Wars, they started conflicts among ethnic peoples with many different religions.(Historychannel.com) The major cause for the First World War was the assassination of the Austrian archduke.

This is what started all the bloodshed and battles for the first war. Nobody really saw the First World War coming, and after it was over Woodrow Wilson said it was the “war to end all wars” . So many people had died in the First World War and Wilson wanted to get something good out of it, so he tried to approve the Treaty of Versailles even though he was very ill. All the countries ended up accepting this treaty, except for the United States. This treaty was never passed and kept getting shot down until Wilson finally died in 1924 . Many people agree that nothing in World War I was worth all the slaughter. The darkness of the First World War shaped the next 20 years for the Second World War.

Many events from the First World War are directly related to the Second World War. Many people agree that Adolf Hitler could not have done what he did without the First World War occurring. The cause of the Second World War was related to the failure of the peace terms from the First World War. These peace terms created as many problems as they may have solved . Another point was made that Lenin’s plans for international revolution in the aftermath of World War I, which were not fulfilled, would be fulfilled in the course of World War II .(Discoverychannel.com) At the end of the First World War, Britain, France, and Italy establish their indirect and direct rule throughout the remaining Ottoman lands except for the territory of the Turkish Republic. At the same time, the retreat of Western colonialism was happening and accelerated dramatically in the aftermath of World War II. The collapse of the Soviet Union brought more independence to Muslim societies (Historychannel.com).

According to Franklin Roosevelt, the Second World War would “end the system of unilateral action, the exclusive alliances, the balances of power, and all the other expedients that have been tried for centuries – and have always failed.” We will have a “universal organization” of “peace-loving Nations” and the beginning of a “permanent structure of peace”.(Historychannel.com) Instead World War II produced a truly global Cold War. World War I generated fascism, communism, and the reversal of a century-old trend toward democracy.

The conclusion of the First World War happened because Wilson came up with the Fourteen Points, which was the best-known peace proposal for all the countries. The Treaty of Versailles was the final conclusion to this war. Wilson, Lloyd George, and Clemenceau finalized it . The conclusion of the Second World War was quite deadlier. The United States ended this war by dropping two atom bombs on Japan’s infamous cities of Hiroshima and Nagasaki . The peace settlement was started by Stalin, Churchill, and Roosevelt after Japan gave its unconditional acceptance of Allied demands.

Many people agree that absolutely nothing good came out of the First World War, which I believe is true. The only thing that came out of the First World War was the setting up for the Second World War. One very good thing came out of the Second World War, and that was the United Nations and the Security Council. For once the world had a united body that they could turn to. This has seemed to be working well since we have not had any major wars since World War II. I do feel though that the United States will do whatever it wants even if the United Nations and rest of the Security Council disagree with them. A good example of this is the recent military action on Iraq.

Basically, the entire UN Council is somewhat against this, yet the United States feels it’s there right to move in. I still believe though that the United Nations was a very good thing that came from World War II. There is one thing we do have to consider though. Was the bloodshed and killing of World War I and World War II worth the forming of the United Nations? Some people think these World Wars had to happen as advancement in society. But that is a whole different story. 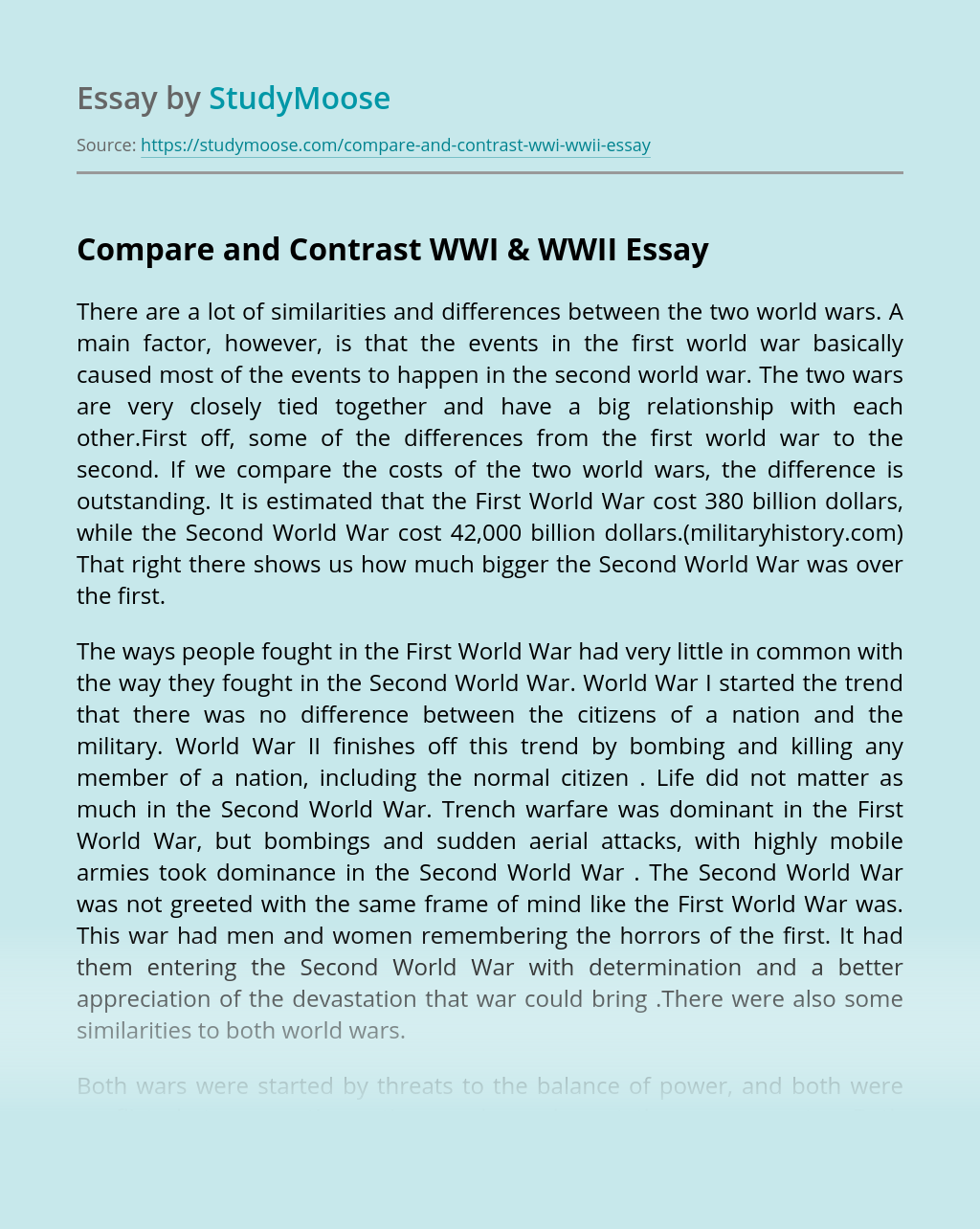 Turn in your highest-quality paper
Get a qualified writer to help you with
“ Compare and Contrast WWI & WWII ”
Get high-quality paper
Helping students since 2015
Stay Safe, Stay Original