A Place Where the Sea Remembers: Character Like Candelario Marroquin

In A Place Where the Sea Remembers, the author talks about a lot of unique characters. Candelario Marroquin is a man who has had a very hard life, but now that he has been promoted it looks like his life with Chayo, his wife, is looking up. He is a big character in the book and is greatly affected by fate.In the opening of the book, when Candelario Marroquin is first introduced in the story, he is painting the door of his house blue as a celebration that he has just gotten promoted to a salad maker.

Don't use plagiarized sources. Get your custom essay on
“ A Place Where the Sea Remembers: Character Like Candelario Marroquin ”
Get custom paper
NEW! smart matching with writer

It is expressed that Cande is very fond of the color blue and all of its meaning to him. As the story goes on, Cande gets fired from the job after he makes an inedible salad, although his boss, Don Gustavo, is the one who had created it.Candelario is affected by many things that go on in the story. For instance, he is indirectly affected by rape because his sister in law, Marta, gets raped.

This also ties in with abortion because Marta wants to get an abortion, but Cande offers to take care of the baby once it is born.

When he finds out that Chayo also gets pregnant he decides not to take Marta’s baby because they are unable to take care of both, so then Marta is forced to have the baby and take care of it on her own as a single parent. Moreover, she becomes desperate and puts a spell on their unborn baby.

Later on in the story, his nephew Richard, Marta’s son, dies in a terrible storm and gets washed away into the sea. It can be considered karma that Marta’s son dies. Candelario’s wife Chayo is connected with all of these events as well. It is fate for them that they have a baby and therefore cannot take care of Marta’s baby, which cause her to do what she did and put a spell on their baby. It is also fate for them that Cande got fired from his job as a salad maker. Most of the events related to Cande that I earlier mentioned are also fate for Marta. Marta and Cande’s action are closely related. It is also fate that Marta goes to Rememdios to ask her to put a spell on Cande to change his mind and take her baby.

However, Remedios does not want to do that because she does not want Marta going to “El Norte”, she thinks it will ruin her. Remedios is indirectly affected by rape in this sense. Remedios is someone who is indirectly affected by everything through other characters. People go to her when their relatives die, she is the one who knows how to wrap them up and bury them. She is affected by fate because she is the “curandera”, the healer, which brings all the people from Santiago to her, and it is fate that brings her to the sea. Cesar Burgos is not affected by rape or abortion but he I extremely affected by single parenthood and death. Cesar had a wife and three young sons, but one day his wife and two of his kids went on a trip and they died in a car accident. He then had to be a single parent and raise his remaining son, Beto.

Fate affects him through these two major events. It is fate that his wife and two kids died, which causes his son to change and make him feel guilty for their death. Don Justo is also not affected by rape or abortion, but he is affected by single parenthood and death. He had a wife who died, and had five children at a time and only two survived. Don Justo is forced to take care of his two remaining daughters, he also ends up remarrying As the story continues, he receives a telegram that his oldest daughter Justina died. This causes him to get drunk and he then unwillingly kills his own bird. A time after, his dog also dies of old age. All of this is related to fate, it is fate that his life is looking down because of having so much death in his life, but in the end he picks his life back up and lives on. Rafael Beltran is only affected by rape and single parenthood.

Rafael does not have a father figure and he lives with with his mother because she is sick. He meets Esperanza through his mother because she has is her nurse. Rafael is indirectly affected by rape because Esperanza was raped when she was 17. Rafael ends up falling in love with Esperanza and they get married. His mother also brings Ines into his life because she is her maid, he teaches her how to write, with that he is able to grow and let go of only being focused on his job and his mother. It is fate that he lives with his sick mother, which brings Esperanza and Ines into his life. Esperanza is only affected by rape and fate. It is fate that she was raped when she was 17 because this causes her to leave her boyfriend at the time and go into a depression. She also takes nursing classes which lead her to become a nurse. This lets her and Rafael fall in love and be together.

A Place Where the Sea Remembers: Character Like Candelario Marroquin. (2017, Jan 21). Retrieved from https://studymoose.com/a-place-where-the-sea-remembers-character-like-candelario-marroquin-essay 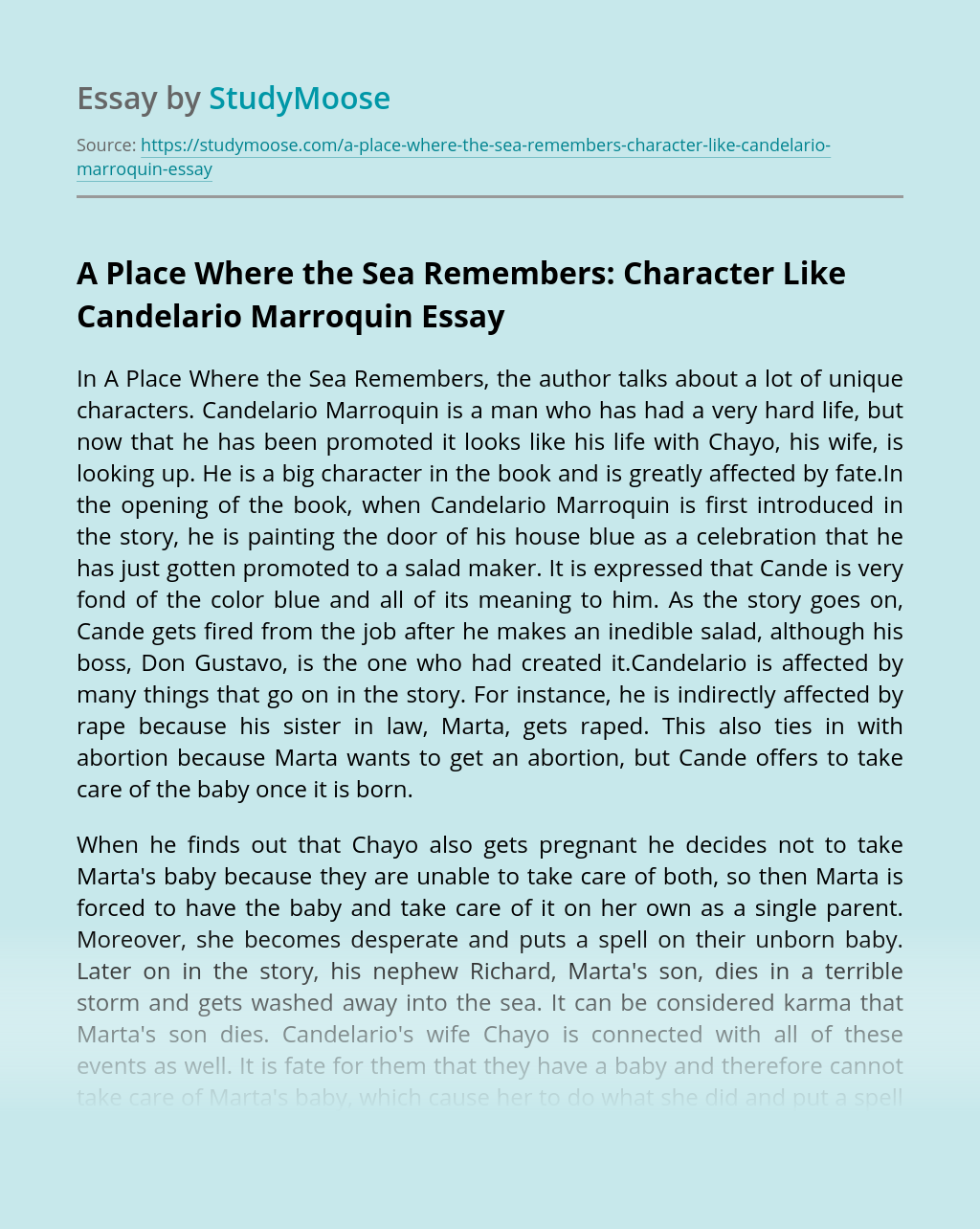