Chapter eight, Grooming Gone Wild, of the book Zoobiquity by Barbara Natterson Hororwitz and Kathryn Bowers, was about the grooming habits of both animals and humans and how sometimes they can be taken too far. The main theme of the novel overall would be how animals can help solve human social issues.

The chapter opens with an anecdote to “Feather Picking disorder” where birds picked at their own feathers even though it caused them pain. She connects the symptoms of “deliberate bodily-harm” and “distress in loved ones” (160) that were present in the birds and compared it to her human patients.

Don’t waste time
Get a verified writer to help you with Chapter Eight Summary of Zoobiquity by Barbara Natterson Hororwitz
Hire verified writer
$35.80 for a 2-page paper

She explains the commonalities of how both derived pleasure from self-harm. A reference to celebrities and movies makes her argument all the more relatable and shows that self-mutilation is that rare. She brings up the question: Does pop culture encourage these behaviors in humans?

This is an interesting topic as it is a double-edged sword. Do celebrities, the people who are supposed to be role models for the younger generation, unknowingly perpetuate an acceptance for self-harm? Popular movies such as Thirteen and Girl, Interrupted show young women going through troubled times, and how they dealt with handling it.

They shed light and spread awareness of these coping skills that helps cutters feel that they’re not as alone. They raise comprehension that these issues are widespread and do need to be addressed. As seen within Mukherjee’s book, what moves an entire society will cause a shift in medical progress towards curing it.

Because of these films, more people probably sought out help for their problem rather than internalizing them.

However, some of them might have tried what they saw in the movies because they saw someone do it. Celebrities like Angelina Jolie and Princess Diana seem more relatable and human when they confessed to harming themselves, but they also unknowingly encouraged people who emulated them to try it as well. Granted it is a small population of people who do, but it is a group of people nonetheless. On the same note, the authors of Zoobiquity say that the solutions presented to make animals stop their “stereotypies” (170) can be applied to human patients as well.

The most common causes of stereotypies are stress, isolation, and boredom. When animals become bored they don’t have any outlet for their energy. A horse that is fed grains and oats in a feedbag has no need to go out and graze grass. They don’t have an outlet for this energy that is usually expended in their natural environments so they become “flank biters”. They are also herd animals in the wild, so when they don’t have stall mates or another animal near them they get lonely. They can’t even fall asleep without a sentry (171). Being isolated causes them anxiety, which in turn stresses them.

To manage with this they would also bite themselves. This problem is prevalent in all animals that are kept in captivity. Zookeepers are always alert for the signs of boredom. Most zoos have their own enrichment programs for their animals that create toys that stimulate the animal in working for their food. In the Biomedical Research Institute they had an animal behaviorist, Blake Harrington, who was there to ensure that the animals were content and to figure out why if they were not.

These same factors, which lead to unhappiness in animals, cause despondency in humans as well. Homo sapiens as a species are social creatures. Even if some seek out isolation, they still need to be around others or have some type of goal to not feel purposeless. The feeling of having a purpose, says Horowitz and Bowers, is the key to active prevention of self-mutilation. They compare the average young adult to a restless horse with technology to isolate them and now way to expend their energies because of modern conveniences (174). A myriad of solutions, which come from what behaviorists do to their animals but tweaked so they’re appropriate for humans, are suggested. Teenagers can go find their own social groups by joining sports, theatre, or volunteering.

Forms of psychotherapy and distracting non-harmful “hit” of pains, such as snapping a rubber band, are advocated to self-injurers (173). These are some of the ways that animal and human medicine are already converging. With the solutions to self-harm already given to animals, applying them to humans should work as well, and creates new innovative ways for solving these psychological habits. The chapter ended on an interesting note. It asked if preening rituals such as plastic surgery, repeated electrolysis, Botox, etc, crossed the line of self-care into self-harm. The class discussion about this was thought provoking and many opinions were voiced for both sides of the argument.

While certain people take plastic surgery to the extremes that escalate into addictions, getting a little done is not viewed as unacceptable in society anymore. Having your body “fixed” is no longer a faux pas, but is rather encouraged with modern media. Should it be seen as the “norm” though? Should people who want to put their bodies under these sort of stresses be advised to go to counseling first, to try the “animal” solutions before having something taken or inserted in themselves for their self-esteem? This is a current social issue facing the world today.

Zoobiquity was a book that was about comparing animals and humans and seeing the connections between them, in its most base form. It was, however, more than that. The topics elucidated in the novel were applicable in 2012 and will still be widely debated in the future. Perhaps the prospective solutions for stereotypies in animals will work for human patients as well. The authors presents facts and connections between both worlds, but it is up to the audience to decide whether or not they are viable, and what to do about the problems prevalent at the moment.

Works Cited
Natterson-Horowitz, Barbara, and Kathryn Bowers. Zoobiquity: What Animals Can Teach Us about Health and the Science of Healing. New York: A.A. Knopf, 2012. Print. 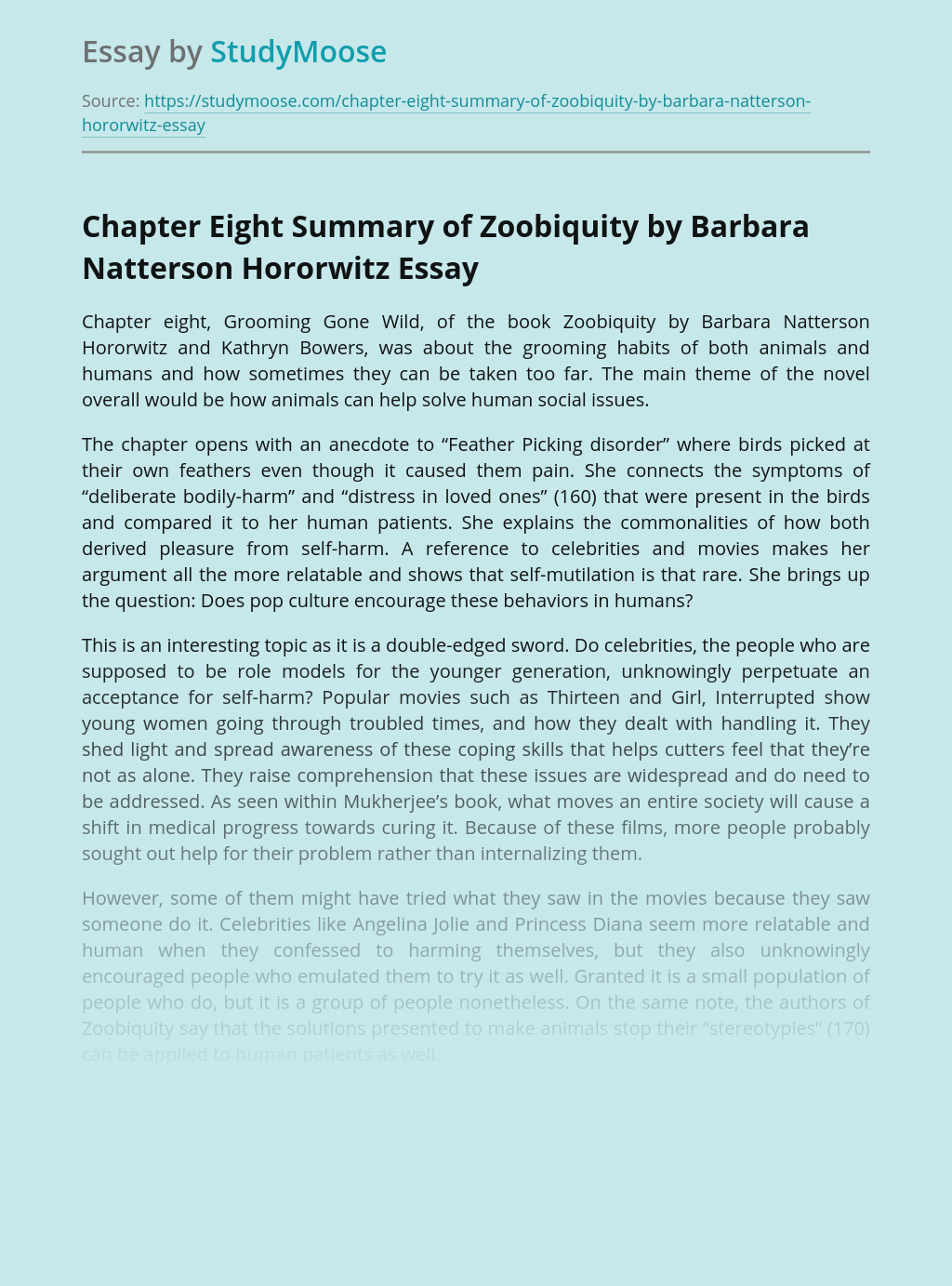