The Role of Fate in Oedipus Rex

Oedipus Rex was written by Sophocles as a tragedy highlighting the inevitability of fate in the lives of human beings. The finality of fate underlies in the entire theme of the play. To quote Charles Segal, “The story of Oedipus is the archetypal myth of personal identity in Western culture. It is the myth par excellence of self-knowledge, of human power and human weakness, of the determining forces of the accidents of birth that we can neither change nor escape.” Oedipus Rex was produced around 429 BC.

Don't use plagiarized sources. Get your custom essay on
“ The Role of Fate in Oedipus Rex ”
Get custom paper
NEW! smart matching with writer

At that time, the Greek social system operated not only under an advanced system of government and laws, but also through a rigid system of religion that endeavored to make man accountable for his actions. Thus, society as a whole adhered strongly to the fundamental religious precepts, and the concept of Fate, or predestination, occupied a central place in the belief-system of the Greeks.

It was believed that human life was a series of events predetermined in their fate, which was ordained by the will and whims of the gods, and could not be averted.

However, some humans, by virtue of insight and good character, were in theory able to tap into divine knowledge through inspiration or prophecy. Thus, fate made itself known through prophecy. The prophet supposedly had a spiritual link with the deities, and was considered to be a medium through which the gods communicated their will to humans. The most supreme god, Apollo, son of Zeus, was also believed to be the god of prophecy.

To him, many temples had been erected, some especially for the purpose of fortune-telling. One such place was the Oracle of Delphi, which housed a priestess known as the Pythia who could foretell the future. In Oedipus Rex, the reader finds repeated allusions to the concept of fate manifesting itself through prophecy. The whole plot is woven around this idea.

In the storyline, prophecy holds a key significance – without it, the misfortunes that befall Oedipus could be wrongly interpreted as the outcomes of free will or decision. It is the prophecy that tells both the reader and the protagonist that every subsequent action Oedipus performs is fulfilling a chain of events already predetermined for him. In the play, characters that act as a medium for fate are the Oracle of Delphi and the blind prophet, Teiresias. In the tragedy, Sophocles makes some strong assertions about the role of fate: Firstly, man cannot escape the fate decided for him. Even if he tries to use his good judgment to out-maneuver it, he cannot prevail. The futility of human planning against fate is highlighted in Laius.

King Laius had known the prophecy that a son would be born to him, who would one day kill him and marry his wife. To prevent his fate, he ordered for Oedipus to be left alone to perish on Mount Cithaeron. But Oedipus was saved by divine intervention, and did indeed survive to finally kill his father. The worthlessness of human planning can also be seen in Oedipus – when he found out about the prophecy, he left his supposed parents so that he would not kill one and wed the other. But this very act brought him right into contact with his real parents and enabled him to unwittingly act out the prophecy. Secondly, the misfortunes brought on by fate can be a punishment for the sins of forefathers. A person may not have deserved ill-fate through his own vice, but the greater system of justice required that he should suffer for the wrongs of his predecessors.

Therefore, when Laius abducted Pelops’ son Chrysippus and dishonored him, he not only violated the virtue of the young boy, but also showed gross ingratitude to his hospitable protector Pelops. These two sins accounted for the misfortune that beset Laius and his son Oedipus. Also, the onslaught of the plague upon the city of Thebes was again a punishment for the king’s murder, and it threatened not just the murderer but the entire Theban nation. The tragedy of Oedipus Rex reasons that fate can deal out punishment of one man’s sins to others who are indirectly connected with him. Thirdly, fate acts in consort with human temperament to bring about man’s downfall. In other words, it is the rash and imprudent behavior of a person that hastens a dreadful end.

Had Oedipus been careful enough to heed the prophecy, he would have hesitated to kill a man as old as his father, or marry a woman as old as his mother. But arrogance and impulsive action in the first instance, and the desire to assume kingship and renown in the second, drove him towards his destiny. As a fourth argument, man often commits a sin which he considers minor and which he believes he can hide. In the tragedy, Oedipus had killed an old man he encountered on a narrow crossroads, and thought of it as a minor incident. Yet the sin could not remain hidden – it came face to face with Oedipus later in life and made him pay dearly for it. Furthermore, the play suggests that arrogance before the gods and disbelief in prophecies is a punishable sin. In Oedipus Rex, Queen Jocasta, the mother of Oedipus, is seen as a character who repeatedly doubts the prophecies of the Oracle of Delphi as well as those of Teiresias. Oedipus is also a character who shows disrespect to the blind prophet Teiresias and abuses him verbally. Neither is he a firm believer in the Oracle’s prophecy, because he thinks it is in his power to avoid it, not accepting the greater power of the gods over himself.

In the end, as the truth dawns on him, he cries out in acceptance of the superiority of the gods: “It was Apollo, friends, it was Apollo. He brought on these troubles…” Paradoxically, the intervention of the prophecy in Oedipus’ life also becomes a reason for his downfall. Had the Oracle of Delphi told him clearly that Polybus and Merope were not his real parents, Oedipus might have suspected that the woman he was marrying could be his real mother. By keeping him in the dark about his parentage, the gods cast him in a state of confusion which ultimately ensured that the prophecy would be carried out. Thus, while fate was certain, prophecies could be cryptic and intentionally misleading. Rather than truth, prophecies were agents of fate – they caused the inquirer to execute his exact fate. For these reasons, Oedipus comes across as a child of destiny, a person condemned to a freakish fate. This sentiment is proclaimed by himself towards the end of the play when he remarks: “And yet I know this much – no disease,

Nor any other suffering can kill me –
For I would never have been saved from death
Unless I was to suffer a strange destiny.”  In the play, Sophocles has cast the concept of fate in such a formidable and powerful role that the reader is compelled to wonder whether it was fate, more than any character flaw, which led to the hero’s tragic end. Dodds (1966) also reflects this thought in his paper “On Misunderstanding the Oedipus Rex” when he asserts that Oedipus had no real tragic flaw but simply an unfortunate destiny.

The Role of Fate in Oedipus Rex. (2016, Mar 12). Retrieved from https://studymoose.com/the-role-of-fate-in-oedipus-rex-essay 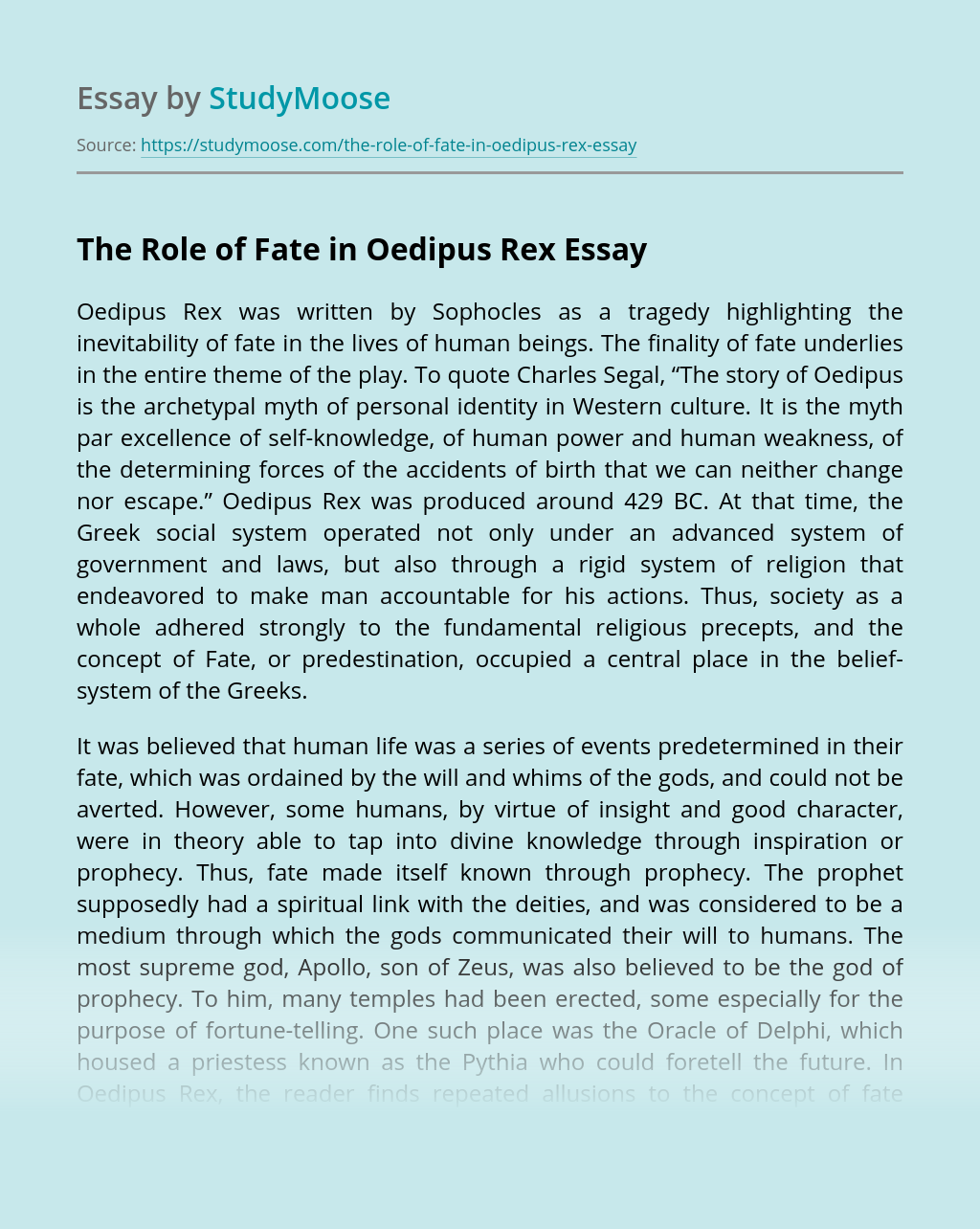