Dramatic Irony in Oedipus the King

Don't use plagiarized sources. Get your custom essay on
“ Dramatic Irony in Oedipus the King ”
Get custom paper
NEW! smart matching with writer

The first act of dramatic irony is Oedipus’s curse towards himself. Out of anger, at not being able to find the murderer of Laius, Oedipus intends to curse the murderer. However, he is actually cursing himself. For instance, in scene one Oedipus says, “And this curse, too, against the one who did it, whether alone in secrecy, or with others: may he wear out his life unblest and evil!” (1,1,251) As these harsh words leave Oedipus’s mouth, he never once thinks he will be cursing himself; but the audience know that he indeed is placing the curse upon himself.

This is an example of dramatic irony because the audience knows that Oedipus himself is the murderer that he is seeking to find; however, Oedipus, Creon, and Jocasta do not.

Another example of dramatic irony is how Oedipus insults the old man, Tiresias. In anger, Oedipus says, “In truth, but not in you! You have no strength, blind in your eyes, your reason, and your eyes.” (1,1,375) These words anger Tiresias even more than he already is, so he replies to Oedipus, “Unhappy man! Those jeers you hurl at me before long all these men will hurl at you.

” (1,1,377) All of Tiresias’ words come into existence. The dramatic irony in the statement Oedipus hurls at Tiresias results in Oedipus becoming blind himself. Not physically blind at first, but he could not see what his own true identity is at that moment. Also, after finding out who he truly is and as he looks down on Jocasta’s (Oedipus’s mother/wife) dead body, Oedipus plunges out his own eyes using the pins from Jocasta’s clothes so that he can see no more evil.

The final example of dramatic irony is the fortune-teller’s prophecy. In the beginning of the play, Laius and Jocasta have to make an important decision about whether or not to kill their son in order to save Laius’s life. The fortune-teller has delivered a prophecy to the couple which said their son will grow up to kill his father and marry to his mother. Thus, they pierce his ankles together and give him to a shepherd who is ordered to kill the child. Instead of killing him, the shepherd gives him to another shepherd who takes Oedipus and gives him to King Polybus and Queen Merope from Corinth to raise. By doing this, the shepherd does not know he is actually helping the prophecy to come true. In addition, Oedipus grows up and is also given the same prophecy, so he flees from Corinth to find somewhere else to live. By doing this, Oedipus also helps the prophecy to come to past. Along the way to find his new home, Oedipus kills an old man in self-defense, who is later discovered to be Laius (his father). After taking over Laius’s thrown and marrying Laius’s wife (Jocasta/ Oedipus’s mother), Oedipus later finds out that the prophecy has come true. Not only has the prophecy come true, but Oedipus has played a huge part in helping it come to past. He finds that running from the prophecy has caused him to actually run into the life which the prophet has warned him about rather than saving him from the life which he despises and thinks he has escaped. The dramatic irony behind these events is, although Oedipus thinks he has defeated the prophecy, the prophecy is being fulfilled throughout the story without the knowledge of the main characters.

Although Oedipus, along with most of the other characters, does not know what is actually going on during the play, the audience does. Because of Sophocles’ ability to use dramatic irony throughout the play, it gives the readers the ability to know everything that is going to happen before it actually takes place. Even though Sophocles uses many scenes to portray dramatic irony, the three most important are Oedipus’s curse, Oedipus’s insult, and the fortune-teller’s prophecy.

Dramatic Irony in Oedipus the King. (2016, Apr 06). Retrieved from https://studymoose.com/dramatic-irony-in-oedipus-the-king-essay 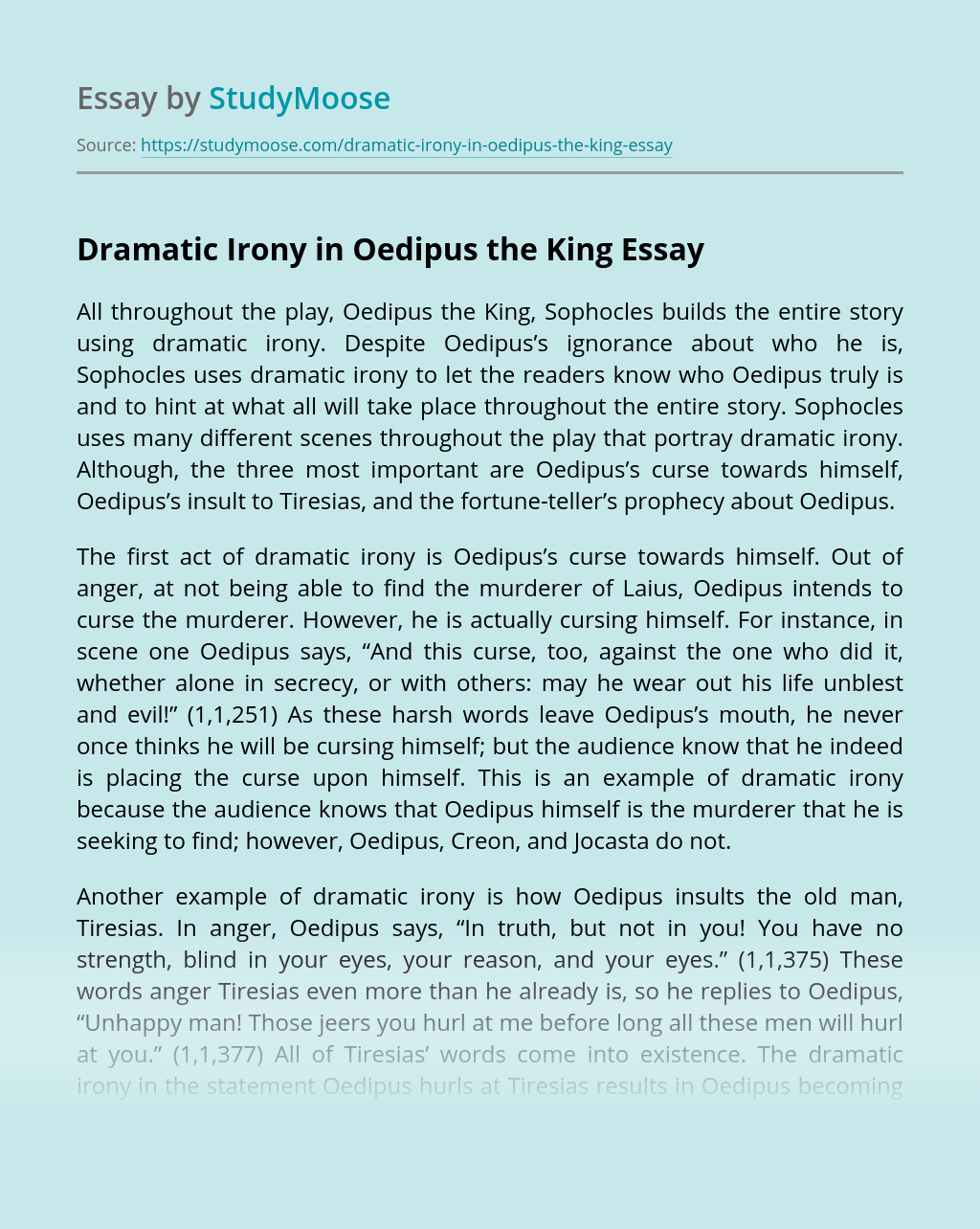