In an argument between King Creon and his son Haimon, the author reveals that with power, pride and refusal of corrections start to develop. In the Greek play Antigone, Sophocles creates a story about an arrogant, power-hungry king. In doing so, he reveals the consequences of being a dictator, rather than being a noble ruler —an issue that can be found in many countries since many governments today abuse their power. Through the use of symbolism and motifs, Sophocles created a world that is clutched in the hands of a tyrant; he shows how a man who is satisfied by power becomes the one clutched by him.

The situational irony in scene three truly emphasizes Creon’s issues as a king. In this particular scene, Creon and his only son Haimon, argue about Antigone’s punishment for defying his decree. Haimon points out how his father refuses to accept correction. “I beg you, do not be unchangeable; Do not believe that you alone can be right (Scene 3).

” This quote is powerful and more vulnerable than the others because it is between a father and his son. This stressed the idea that not even his family is by his side to substantiate his rule. His own son advocates how he is legitimately “unchangeable (Scene 3).” This is considered situational irony because the son is correcting the father, when it should be vice versa.

Moreover, Creon craving for power also influences him to oppose the gods. “You have no right to trample on God’s right (Scene 3).” This quote accentuates the motif of lust for power. Haimon believes that his father rules as if he was one of the gods. Creon controlled every aspect of the people’s lives of Thebes. His laws are viewed upon as unreasonable and as an act of tyranny. This can also be considered situational irony because the people gave him his power; yet, he became an abominable king who makes decision as if he was one of the gods.

“The man who maintains that only he has the power… A man like that, when you know his, turns out empty (Scene 3).” This quote is dynamic of all. Haimon predicted Creon’s future due to his hunger for power and his thirst for authority. His exact words foreshadowed his father to be left “empty (Scene 3).” In the end, Haimon and Creon’s wife Eurydice, both commit suicide in grief. As the play ends, Creon has an anagnorisis and ends with “Fate has brought all my pride to a thought of dust (Scene 5),” he is left alone to live with a void in his life.

These quotes help emphasize on one of the important motifs in Antigone, pride. Through these lines, King Creon can be easily distinguished; even what his life would be like in the future. Sophocles’ decision of making the argument between King Creon and his son Haimon was very effective and the motif of with power comes pride, can be easily determined. Sophocles successfully supported his motifs with powerful quotes; moreover, they helped emphasize his ideas throughout his work. 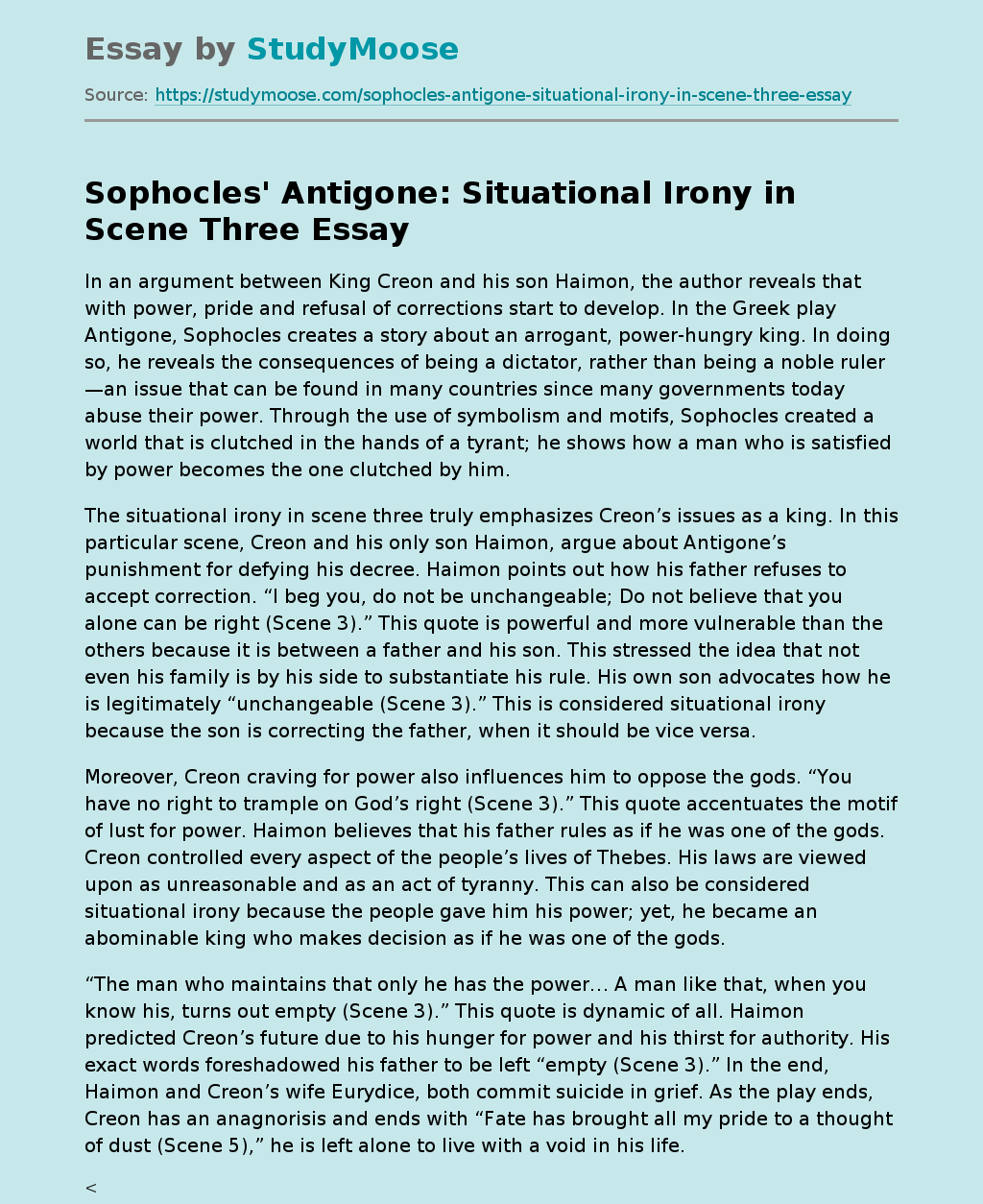