Aristotle outlined six main fundamentals of tragedy: plot, character, diction, thought, spectacle, and music or song. He reflected on plot and character as the first two components or the primary components. In his Poetics, he explained the proper mix of these fundamentals using instances from various tragic dramas, specifically those of Sophocles, amongst other playwrights (Rizzoli, 3 – 6).

Previous to reading Aristotle, Sophocle’s Antigone was similar to any of the previous stories I have read — the protagonist’s character develops as the story is being told, climaxing into a situation of conflict, toward a reasonable ending, that was either unhappy or content or enlightening.

Don't use plagiarized sources. Get your custom essay on
“ Aristotle’s Poetics and Sophocles’ Antigone ”
Get custom paper
NEW! smart matching with writer

When it comes to Aristotle, tragedy developed a definition in which all that belonged to this period could be so categorized on the characteristics that made them alike to each other.

Aristotle united tragedy as imitation, with the other arts that mocked nature of the world. What distinguishes tragedy from other forms of literature, is that it imitates achievement and life, pleasure and misery, prosperity, and misfortune.

The tragedy also reflects, character, the second primary attribute of a tragedy — but it is not character growth which is the conclusion or purpose of tragedy.

The depth of tragedy is its plot. Aristotle makes it very clear that the plot should be whole in itself: beginning, middle, and then end. The plot must have a dominant theme that completes the story as a whole. The character or protagonist acts, and his action is not necessarily a definition of his character.

In Antig one, Kreon is an honorable, loyal leader, and Antigone is the reverent niece of Kreon. Now loyalty and goodness are two characteristic s valued by the Greeks, as intimated by these two model-like characters of Sophocles. Why should Sophocles craft a conflict in two important virtues that the Greeks believed in esteem?

Antigone and Kreon were both stubborn hardheads, unmoved, and unshakeable in their judgments. It was not their individual virtues of reverence, Antigone, and patriotism, Kreon, that shaped the conflict. Instead, the action began when the virtuous Antigone decided to bury his brother and disregarding Kreon’s cautioning. Kreon then in result, forced the death sentence on his niece Antigone overlooking the desperate pleadings of his very own cherished son. This piece revolved around what had occurred after Antigone buried her own brother, and all the actions from the characters in the story advanced from there, initially, and then afterward, all the action in this piece developed even more from Kreon’s decision to punishing Antigone. Sophocle’s work has two major characters and they were both critical in the development of the plot. Notably, the classic components of the tragedy as outlined by Aristotle were evident in these two subplots. The first primary strike was concentrated on Antigone who initiated the wrath of Kreon when she buried her disloyal brother. The second began from that point when Kreon, a primary law – enforcer, insisted to have her put to death, in response to the initiation commenced by Antigone herself.

The two subplots combined with the two major characters would then progress into two parallel stories that basically embraced one firmly integrated cause and effect story, within a time frame steady with Aristotle’s usual routine of keeping within the attention span of the viewer s or spectators.

As the story develops, their characters start to reveal ed without essentially exploring deep into their psychological impulses. Unlike today’s modern writers, Sophocles did not search deep into the psychological attributes of his protagonists. Because of lack of knowledge in that area, it was enough to consolidate them as virtuous or loyal, and that their character traits were obvious.

Their character did not essentially explain their actions. I think these are worthy contrasting examples: Ismene was not inevitably less reverent, but she did not see the need to cause conflict when it came to the power of Kreon. Comparably, Kreon’s beloved son, Haemon, was not exactly less loyal, but he did not understand why his father commanded to execute Antigone.

Both Kreon and Antigone e were tragic characters who achieve Aristotle’s definition of the tragic hero in a story. For example, they were notorious, successful; imperfect human s who were ultimately honorable and moral but with enough share of flaws, with tribulations caused by faults in judgment. For Aristotle, they have to be well – known, so people can relate with them and cause fear or pity (pity for unfair destiny, and fear for a possibility of the same misfortune for ourselves.)

Aristotle delivers us with a principle that at the very least supplied a mutual language with which to grasp and have an appreciation for tragedy. The theory applied twice over to Sophocle’s Antigone, in which the belief applied in a notable instance of double and pa rall el manifestation of power and authority. The theory enriched appreciation because it encouraged us as readers to grasp and understand the legitimacy in two parallel characters moving in a parallel and the cause and effect subplots that lead up to both of their parallel heartbreaking endings. 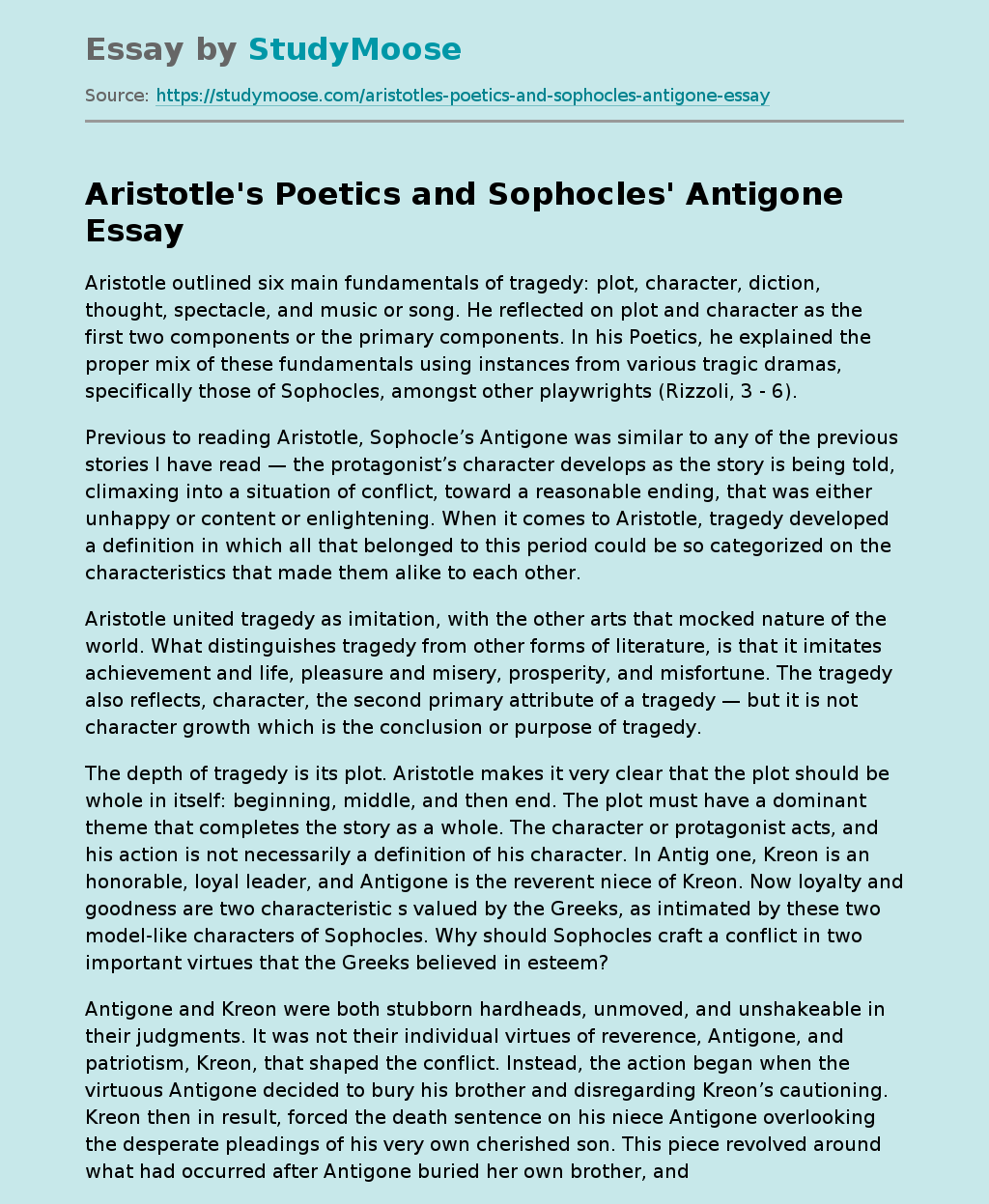