The Poetics of Ambivalence

Many modern poets had ambiguous feelings and thoughts toward aspects in which they were doubtful. Ambivalence is also when someone lacks certainty or the ability to make decisions. Ambivalence is shown in many poems as in “Easter 1916” written by W. B. Yeats, “Church Going” written by Philip Larkin and “The love song of J. Alfred Prufrock” written by T. S. Eliot. The aim of the essay is to show the ambivalence that these poems reflect.

One of the themes that has great influence on Yeats’ poetry is Irish nationalism.

Don't use plagiarized sources. Get your custom essay on
“ The Poetics of Ambivalence ”
Get custom paper
NEW! smart matching with writer

Yeats describes his nationalism as an intellectual act rather than political. Therefore, he has always been against the use of violence in Irish nationalism. One of the poems that reflects Yeats’ ambivalence towards Irish nationalism is “Easter 1916”.

The poem was written to praise the Irish nationalists that were executed after the Easter Rising, a bloodshed memory in history. In fact, while glorifying these people, Yeats is critical about nationalism and the use of violence for independence, so the poem portrays Yeats’ “sincerity and complexity” about the rising (Stock).

Moreover, Yeats’s “strong opposition to the violent political struggle as a means for Irish independence made him uncertain about the justice and success of the rebels’ cause” (Khan). Therefore, the whole poem reflects Yeats’ ambiguous feelings towards this rebellion.

In the third stanza, Yeats contrasts the unchanging determinism of nationalists with the changing life. He says, “Enchanted to a stone / To trouble the living stream” (lines 43-44). Yeats creates an ambivalent atmosphere in this stanza because after glorifying the union of the rebels under a common goal, he compares their extreme idealism to stone for criticism.

According to Khan, the stone “symbolizes not only the single-minded dedication of the rebels and the seriousness of their purpose but also the rigidity and inflexibility of their political intent”.

For Yeats, these people are so enraptured with the idea of nationalism that, they do not question anything while acting. Their idealism is like a hard, unchanging “stone” and they never try to conform to the changing situations though life is like a “living stream”, and it “Changes minute by minute” (lines 44-50).

Although he honours these patriots, he does not fully approve the rising because he is sceptical about the necessity of it. He goes on stating that the nationalists’ dream of a free country caused their deaths by saying; “We know their dream; enough / To know they dreamed and are dead” (lines 70-71).

After these lines, Yeats again questions these rebels’ extreme nationalism and says; “And what if excess love / Bewildered them till they die?” (lines 72-73). By defining their nationalism as “excessive”, he is critical about it because while their aim was to have a better country, free from the British rule, this rising turned out to be a bloodshed in Irish history.

In addition to this, he uses “bewildered” to emphasize that these nationalists were blinded with their extreme ideas until their bloody end. They were so obsessed with this idea that they lacked reason and they did not question anything while acting.

His ideas were reflected in an ambivalent manner because of his Anglo-Irish origin; Yeats has always been in both sides. Though he has accepted himself as an Irish man, he has never been fully detached from his British origins. In his two poems, “September 1913” and “Easter 1916” his ambivalent attitude towards Irish nationalism and rebels is reflected. While he criticizes the middle-class nationalists harshly in the first poem, he softens his tone and glorifies the same people in “Easter 1916”.

Another poem that shows ambivalence is Philip Larkin’s poem “Church Going”. It begins with a deeply ambivalent view of religion. The title sets up the expectation that this will be a narrative about people attending a church for religious purposes, and yet, the opening lines reverse that expectation; the speaker says: “Once I am sure there’s nothing going on I step inside”.

Despite his lack of engagement with the church, Larkin nonetheless begins to be affected by the atmosphere. Even he cannot ignore the silence, and if he were wearing a hat, he would take it off as a mark of respect. Being hatless, he instead removes his bicycle clips.

There is a gentle humour in this stanza as Larkin says that the silence was ‘Brewed God knows how long’. In this setting, it could be said that God does know how long ago this silence began, but it is also Larkin’s way of showing his indifference. This indifference is picked up again in the second stanza when Larkin notices the condition of the roof. It looks ‘almost new’, suggesting that it has been taken care of.

Larkin, however, is unimpressed and seems to want to distance himself from it: ‘Someone would know: I don’t’. He moves to the lectern and reads a few words aloud. Interestingly, Larkin signs the visitors’ book, but as if to remove any significance from that gesture he puts an Irish sixpence in the box.

This valueless coin seems appropriate as he sees no value in the church and says it was ‘not worth stopping for’. All his activities and manners inside the church show that he is a sceptic who has no faith in the church service.

Despite Larkin’s lack of interest in religion, he nonetheless acknowledges that it has given meaning to people’s lives and has treated all equally. At the end of the poem, Larkin accepts that we will always need something like churches to give meaning to our lives. It will draw people to it, even in its ruined state. However, it is important to note that Larkin, while he accepts that very human desire, does not believe in God himself.

Another example that shows ambivalence is the poem “The love song of J. Alfred Prufrock”. The speaker in this poem is hesitant and does not trust himself, he postpones taking action and contemplates his urban surroundings which do not motivate him. We discover a speaker who has desires and dreams yet fails to act on them because he deems himself inferior, unworthy and a failed person.

Prufrock is growing old and bald, and yet his absolute inability to make even the slightest decision for himself and he is captured in his famous question of whether he dare “eat a peach”. Prufrock does not think himself worthy of anyone’s attention; he does not think the “mermaids” he has seen would “sing” to him. As such, he decides it is better to simply never act upon anything he wants, as this is better to being rejected.

Ambivalence was shown in many modern poems as seen also in the poems that were discussed in this essay. The modern poets showed instances of ambivalent attitudes through the speakers of the poems. They managed to reflect their feelings and thoughts in the best way they could for many different aspects that they were concerned.

The Poetics of Ambivalence. (2019, Nov 23). Retrieved from http://studymoose.com/the-poetics-of-ambivalence-essay 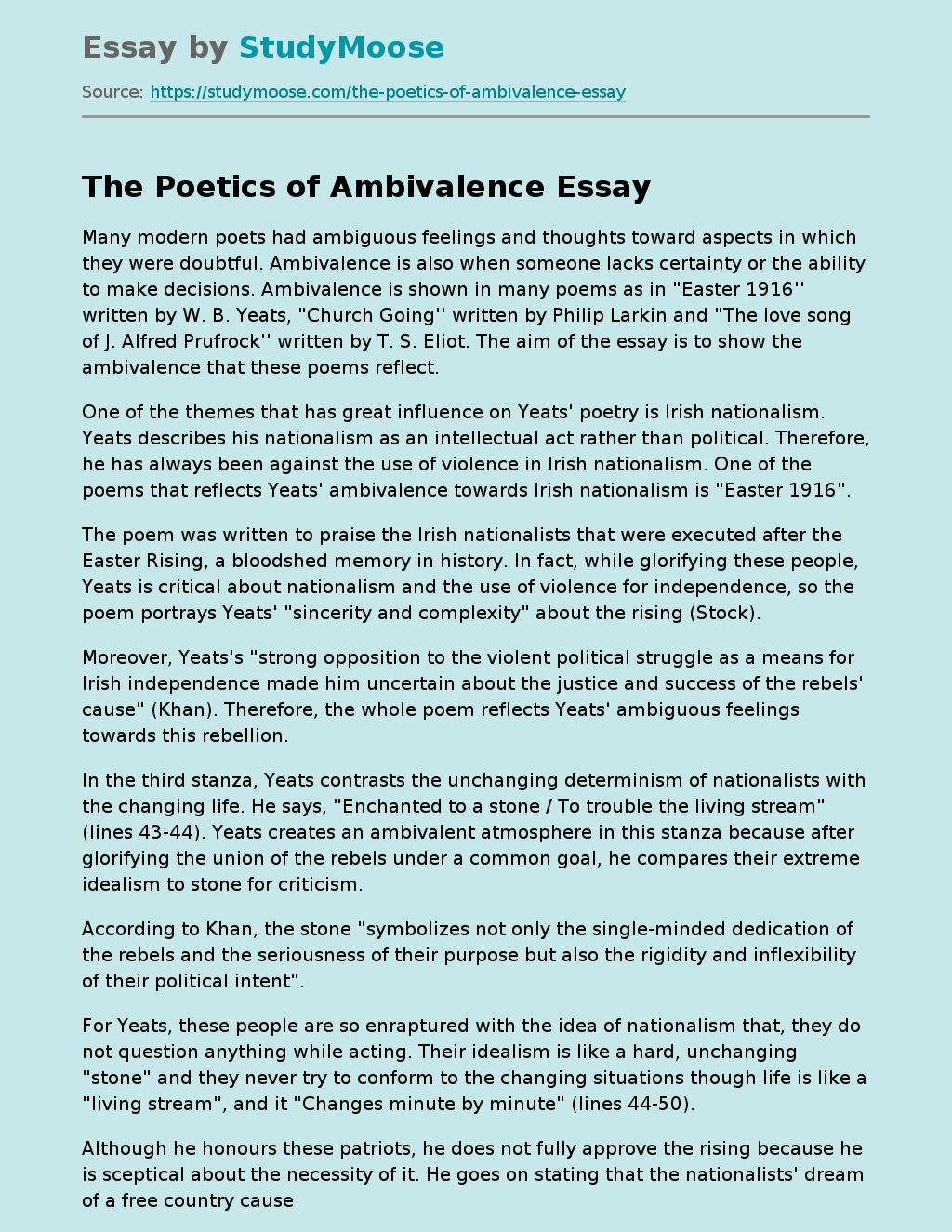